With Casa Calafia, the Mexican studio RED Arquitectos led by architect Susana Lopez, has created a summer residence in Todos Santos, Baja California Sur, a small town located between La Paz and Cabo San Lucas. The project embraces the transition from the desert to the Pacific Ocean thanks to precise architectural choices, in line with the local tradition. 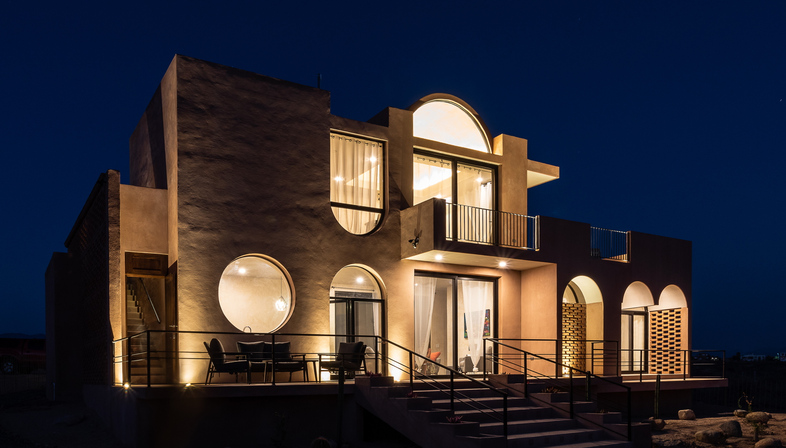 Founded in 1723, Todos Santos is a small town nestled between La Paz and Cabo San Lucas in the Mexican Baja California Sur state. Between the middle of the 19th century and the first half of the 20th century, the area enjoyed a period of prosperity thanks to the production of sugar, explaining the presence of the beautiful colonial-style buildings that dot the town’s historic centre. With the drought in the 1950s, the aquifer dropped drastically and began to dry up, causing a major loss of cane crops and the need to rethink the territory. Starting in the 1980s, the arrival of the motorway began to also bring tourists to the area and, in recent years, many artists and artisans have moved here, transforming Todos Santos into a vibrant cultural and artistic centre.
It is precisely this reputation that attracted the two clients of Casa Calafia, a female couple from Colorado, USA, who approached the RED Arquitectos studio led by Susana Lopez to have their home built between the desert mountains and the waves of the Pacific Ocean. As the Mexican architect explains, the guiding idea of the project is continuity and rupture: "The geometric continuity between circles and curves is derived from the landscape, which never ends, which continues and merges with other landscapes. The geometric break occurs with the language formally established by the surrounding buildings."
As is typical of her style, Susana Lopez chose simple and accessible materials for the construction of Casa Calafia, consisting of concrete blocks coated with cement and natural pigments. A solution, as the architect tells us "that allows us to appreciate the house as a monolithic sculpture, and at the same time control the thermal sensation of intense heat." The brick lattice, on the other hand, not only serves as a brise-soleil, but is a direct reference to the materiality that the small town once enjoyed. The wood used for the carpentry is rosa morada (Tabebuia rosea), a local tree suitable for the production of furniture and fixtures.
The intrinsic sustainability of Casa Calafia – which takes its name from Queen Calafia, the mythical Amazon queen whose legend is deeply rooted in this region – is reinforced by its orientation on the 2,000 square metre plot, promoting the natural ventilation of the spaces. The 200 square meters of useful area of the residence are arranged with an open kitchen, a living room, a dining room, outdoor terraces, service areas, a study, a bedroom and a full bathroom on the ground floor. All the spaces have been designed to offer a continuous visual dialogue with the ocean and the mountains. Communication to the upper floor, on the other hand, takes place through an external staircase that leads to the master bedroom. The staircase is attached to the house, covered by a brick lattice that creates – also thanks to its position perpendicular to the sun – a beautiful play of light and shadow that accompanies users towards the master bedroom.
With Casa Calafia, RED Arquitectos confirms the great attention to the local context in every aspect of the design, from the materials, to the visual connections emphasised by the architectural language consisting of circles, arches and inverted arches. "A building to see and be seen, through and with the landscape", as the architects describe the project, and a place to be in full harmony with the local context. 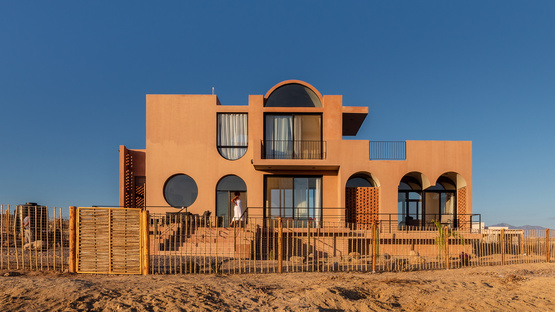 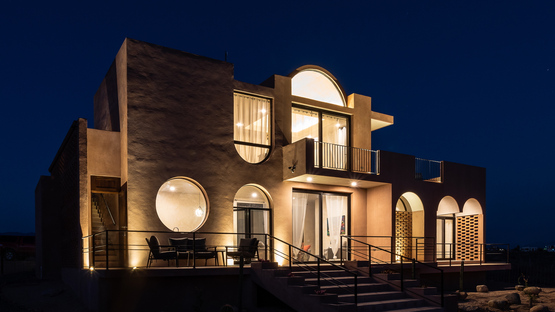 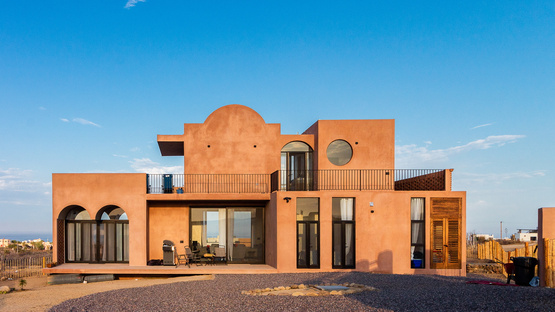 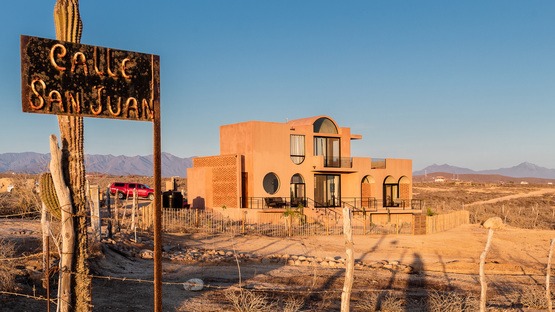 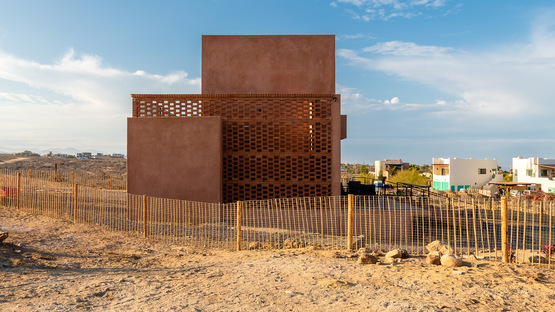 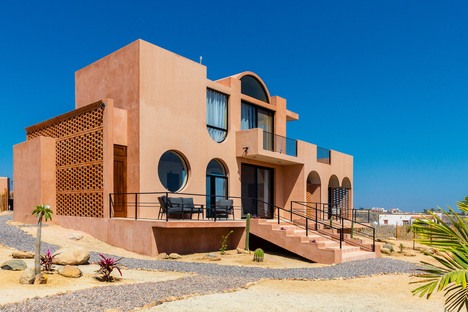 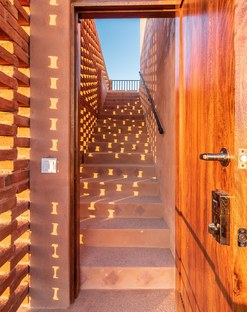 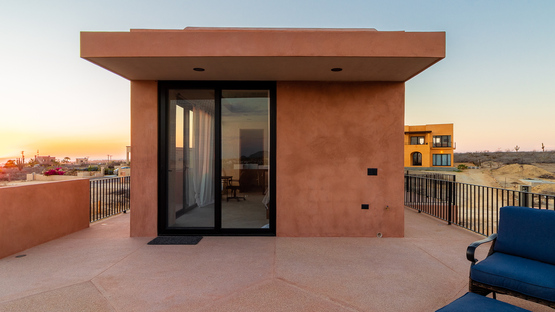 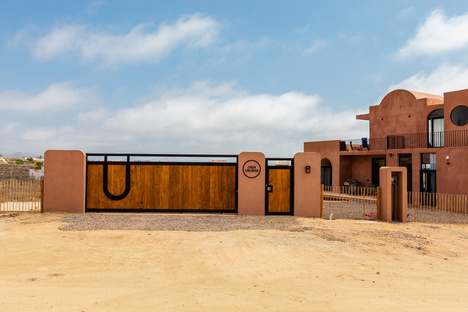 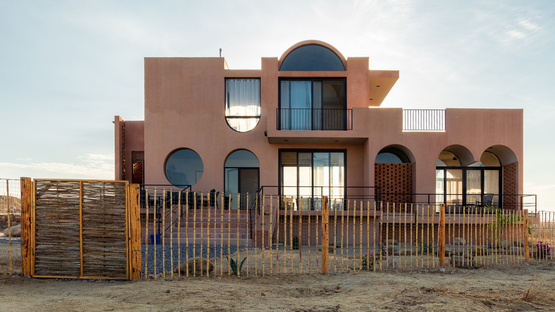 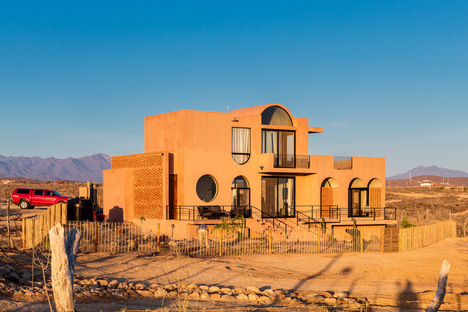 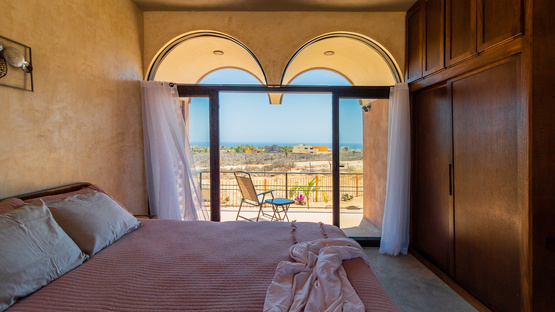 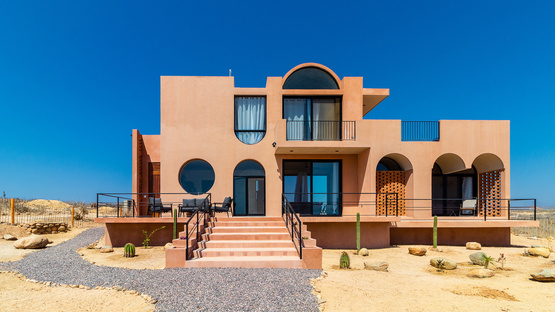