An exhibition on the Olympic Park in Munich at the Architekturgalerie München celebrates one of the most famous projects created by Günther Grzimek (1915-1996), a German landscape architect and advocate of a so-called democratic green. This year marks the 50th anniversary of the structures and of the park created for the 1972 Olympic Games. The exhibition is curated by Prof. Regine Keller with current photographs by The Pk Odessa Co. 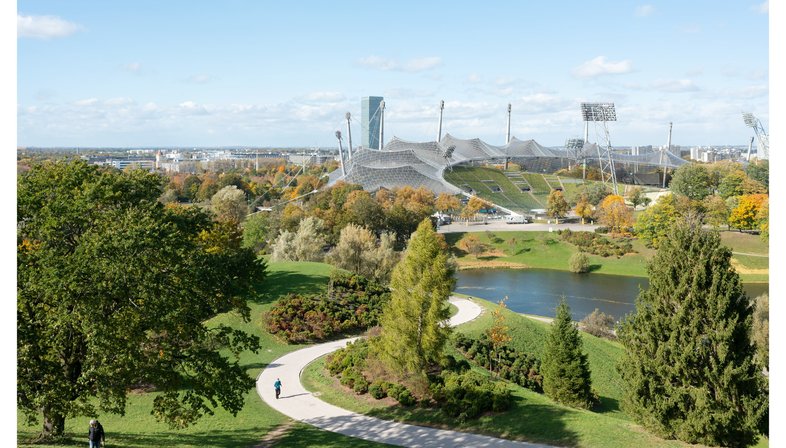 Landscape architecture is a discipline that in recent years has seen renewed interest, as the crucial role of green spaces in helping combat and prevent the consequences of the climate crisis, especially in our cities, is becoming increasingly more evident. Not to forget the great potential of public green areas for civil society in general. So it is no coincidence that today we see more and more landscape architects becoming moderators of participatory processes, as finding a consensus on green spaces is often the first step in solving the problems at hand.
But this is not something happening only today, as we can see thanks to the wonderful "Olympische Landschaft: Günther Grzimek" (Olympic landscape: Günther Grizmek) exhibition hosted in the spaces of the Architekturgalerie München museum. On the occasion of the 50 year anniversary of the structures built for the 1972 Summer Olympic Games in the Bavarian capital, the exhibition explores one of Grizmek's most famous works, the Olympic Park in Munich. The reason behind the exhibition is also the creation of the first monograph on Günther Grizmek who, despite the great impact of his works and of his ideas, still considered progressive today, is not overly well known to the general public.
While everyone is certainly familiar with Frei Otto’s tensile structures that define the architectural face of the Olympic Park few, in fact, know that the area was also at the forefront when it comes to landscape planning. Something which the new illustrated book entitled "Grün" (Green), with its minimal title and focused precisely on the designer of the Olympic Park, wants to remedy, with a series of interesting details on Günther Grzimek's largest project. As Prof. Regine Keller, landscape architect, urban planner and professor of landscape architecture and public space at the Technical University of Munich explains, the monograph is inspired by an idea conceived by Günther Grizmek himself. A project which, however, the landscape architect could not complete, leaving behind a draft of the book.
The focus of Regine Keller's work is thus to complete what Günther Grzimek had in mind thanks to the exchange with people close to the landscape architect and, above all, with the beautiful photographs taken by The Pk Odessa Co. This latter is the name of a collaboration between photographers Simon Jüttner, Markus Lanz and Sebastian Schels, whose work is devoted precisely to the examination and photographic documentation of architectural spaces. Their images portray the face of today's large park, open to all citizens and which, after 50 years, has lost none of its great appeal.
The promoter of a new form of urban green in Germany, a so-called "democratic green", as he referred to it, Günther Grizmek wanted to create accessible places at everyone’s service. Places that could be used without too much caution and rules, without requiring too much maintenance and always ecologically sensible, and thus designed by the landscaper almost exclusively using native plants. In the Olympic Park, whose construction began in 1968, he planted lawns of resistant flowers instead of ornamental flower beds and shrubs. On the Olympic hills, daisies and clover bloom, "cheap" flowers that can also be picked as the architect wanted. Not surprisingly, Prof. Regine Keller describes Günther Grzimek's inspiration for the structure and for its construction as a small foothill landscape of the Allgäu in the heart of the city: quickly and affordably accessible to those who do not often leave the city.
Decades before the famous "

The 13th edition of the Mercosul Biennial in Porto Alegre