The Columbia Building for the Bureau of Environmental Services of the city of Portland, Oregon by American architectural practice Skylab offers an excellent example of a wide-ranging, forward-looking project. The multifunctional complex, LEED Gold certified for sustainability, takes users’ well-being into account while incarnating the institution’s principles of optimal water management. 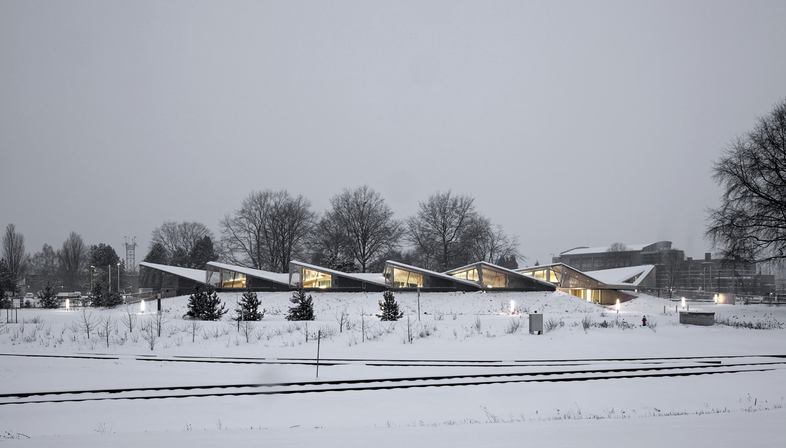 The wastewater treatment facility on Columbia Boulevard in Portland, Oregon originated in 1950 as an industrial site for treatment of both wastewater and stormwater in the city, serving a population of 600,000. Until not long ago, very little attention was paid to constructions of this kind, considered ancillary to the functioning of our cities. But in recent years there has been a greater focus on infrastructure projects of this kind, and on this web site we often discuss projects like this one, essential for making life possible in our cities.
Portland’s existing Bureau of Environmental Services complex was no longer sufficient to house the entire engineering staff. This is where Skylab architectural practice, based in the city, came into the picture, appointed in 2010 to construct a building that would not only house the engineering department of the Bureau of Environmental Services but provide an immersive educational experience around sustainable infrastructure and green building policy, all as part of a wide-ranging project for improvement of the wastewater treatment plant.
On the basis of these foundations, Skylab’s Columbia Building was completed in 2013, covering a total of 1081 square metres. The project, which has won numerous architecture and landscape design awards since the earliest stages of its design, including the prestigious American Architecture Award presented by the Chicago Athenaeum Museum of Architecture and Design in 2015, offers a virtuous example of a construction of this kind, based on the sustainable building policies of the city of Portland.
But let us take a closer look at the various design solutions applied by the architects that qualified the facility for LEED Gold environmental certification in 2015. The new concrete volume is radially oriented along the path of the sun and features a sculptural roof which serves a functional purpose in the building. The seven folds of the roof tilt in a sawtooth rhythm, in which clerestory windows fill the void created by the upward fold. This roof cosntruction, combined with a north-oriented, louvered and openable glass façade, permits maximum use of natural daylight and ventilation during working hours while cooling the building at night. Moreover, the building’s hydronic system is connected with the flow of water through the plant to efficiently heat and cool the workspaces.
The downward folds in the roof drain off rainwater from the landscaped roof toward a berm along the southern façade. Here the water passes through a series of bioswales, returning rainwater through the ecosystem of Columbia Slough to the Columbia River.
Skylab’s redevelopment of the site included a new entrance to the plant, restoration of the existing pool, and modernisation of the parking lot with rainwater management structures and addition of charging stations for electric vehicles. More than 1.2 hectares of land were landscaped with native species from the Columbia Slough area.
The desire for interaction with the population of Portland is expressed in the plant’s new entrance, which features a public space in front of the building with a view over the existing pool. A new landscaped common area is accessible to the plant’s staff and for educational tours about water treatment strategies. A number of meeting rooms in the Columbia Building are available for rental by the public, underlining the community-oriented nature of the services offered by the Bureau of Environmental Services for the city of Portland. 10 years after its construction, the Columbia Building continues to offer a virtuous example of architecture that is sustainable in every way. 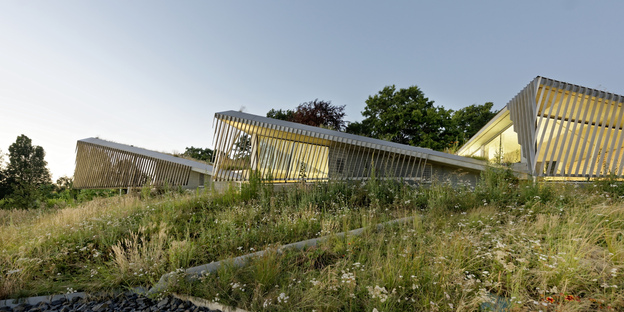 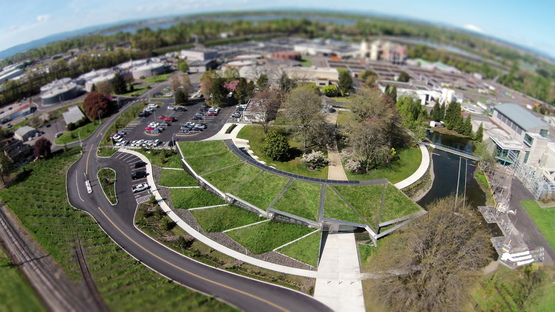 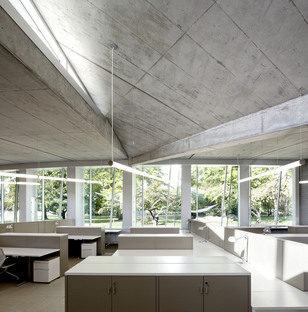 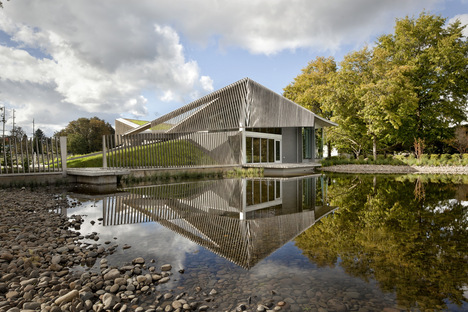 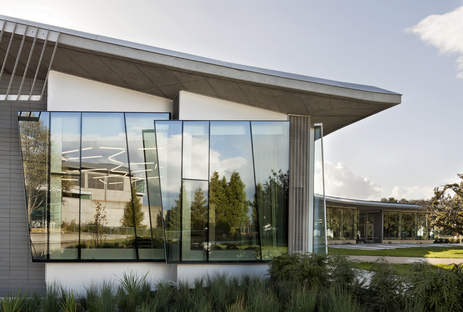 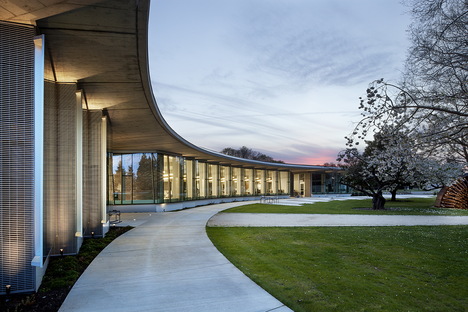 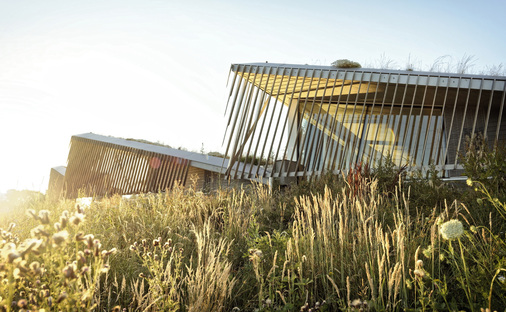