Batlle i Roig: Can Bisa cultural centre and new homes

The new Can Bisa is the result of a delicate restoration project on a nineteenth-century villa and an abandoned area converted into homes by Catalonian studio Batlle i Roig in Vilassar de Mar, near Barcelona. 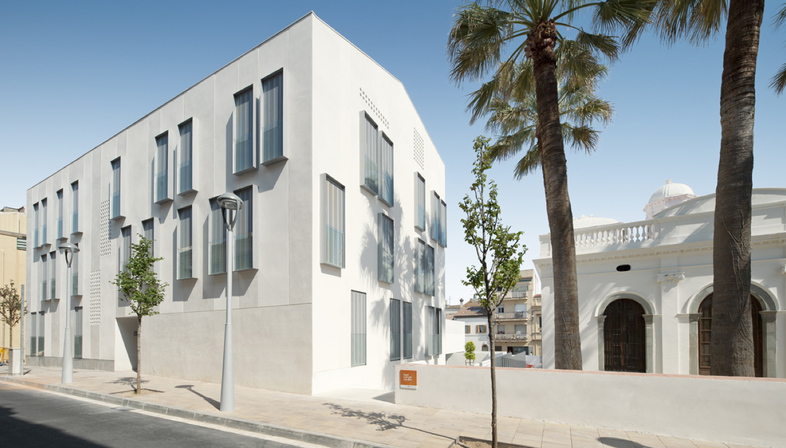 Batlle i Roig completed a renovation project on the Can Bisa lot owned by the municipality of Vilassar de Mar, a town of about 17,000 on the coast north of Barcelona. The Municipality wanted to underline the presence of a late 19th century villa on the site featuring white plasterwork, moulding and capitals in classical style, restoring it to contain the city’s municipal offices and a cultural centre. The villa, surrounded by a landscaped area which had fallen into neglect over the years, stood next to a factory that had also been abandoned for some time, which the architects decided to demolish to implement an interesting programme of subsidised housing and cultural facilities.
In the original general plan entrusted to Batlle i Roig, the villa was to contain not only the city government’s offices but an auditorium and annexed halls; however, verification of the centre’s dimensions led to construction of a new mixed-use building for both residential and cultural use, with allocation of public spaces, on the site of the old factory.
In the layout of the new Can Bisa, an L-shaped block of a shape complementary to the layout of the old villa stands in the eastern part of the 2000 square-metre lot. This design permitted creation of a central courtyard connecting the new complex with the existing construction, despite the difference between these two architectural idioms from different times in history. The auditorium and coffee shop overlook a courtyard which is sunken below street level, with annexed rooms in the innermost part of the building and apartments on the upper levels. Two ramps inclined in opposite directions overcome the difference in level and create a pedestrian link between the alleyways along the sides of the lot, Carrer de Monsterrat and Carrer del Rector Bartrina. This route, which crosses the area from north to south, connects up with the gardens planted with tall palm trees that surround the villa, creating a luxuriant oasis in which the bright white of the wall plaster stands out. The side facing onto Carrer del Rector Bartrina, regulated by a low sliding gate, thus becomes the main entrance to the site. The gardens host the Vidmar Festival, a periodic event that attracts artists from the local area and beyond.
The inspiration for the composition of the new cultural and residential block was provided by Villa Can Bisa and the urban surroundings of the historic centre of Vilassar de Mar, which follows the Riera de Cabrils River, now underground, from the beach and humbly remembers its presence. A choice has clearly been made to keep the new buildings on the same scale as the old ones. They barely exceed the height of the villa, aligned with the height of the residential buildings around them, underlining the image of the new embracing the old. The new building, with its unique inclined roof, has a shorter and taller part that towers over the villa. The roof of the auditorium is also the terrace of the apartments overlooking the villa, establishing visual continuity between the public and private parts of the complex. The strictly contemporary walls without eaves are brought to life by the rhythm of the tall, narrow windows, of the same proportions as those of the nearby buildings. The wooden shutters become metal grids, and the window frames stand out from the walls like slender picture frames, while the little worked balconies are reproduced using smooth strips of glass.
The formal continuity between these two idioms is clear, underlining the age gap between the two buildings. Like the Can Bisa building, the new façades have a white plaster finish, but made in strips with various different widths and finishes. A Middle Eastern influence may be seen in the use of shutters, attached directly to the brick façade.
At the corner of Carrer del Rector Bartrina and Carrer de la Pau, the homes preserve a detail of the windows in the old demolished building, another sign of the history of the site. 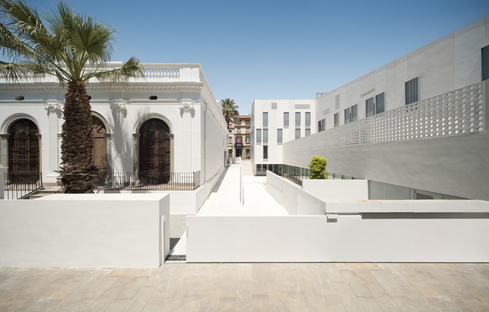 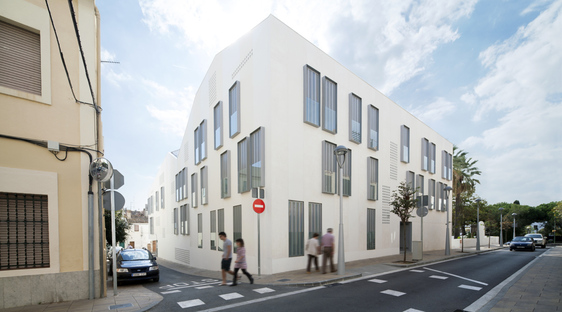 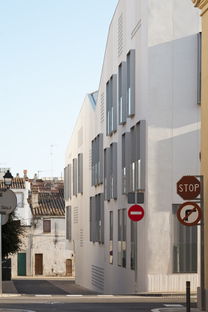 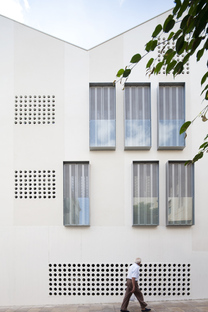 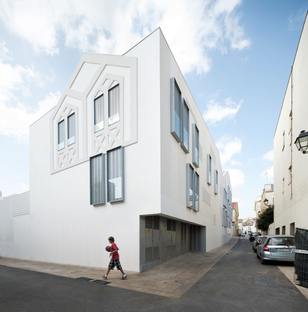 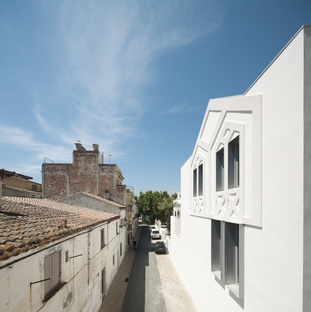 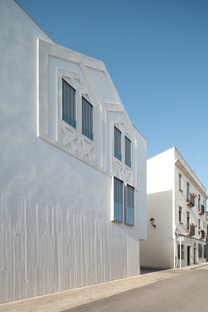 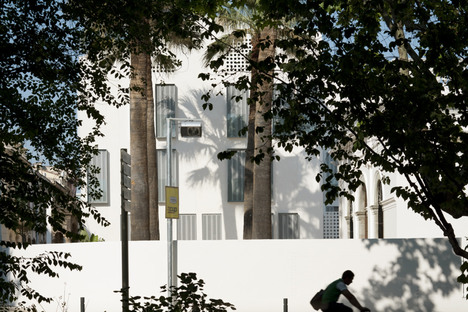 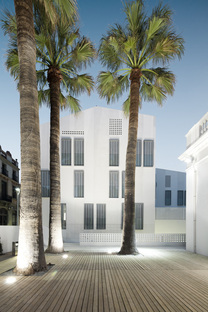 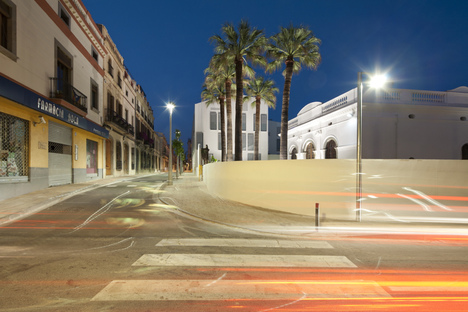 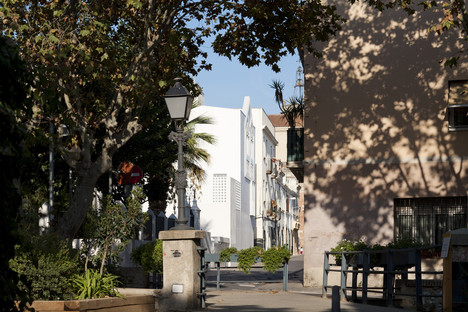 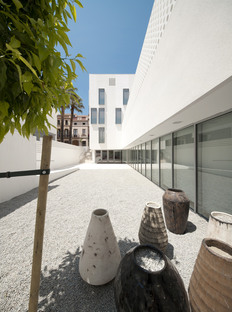 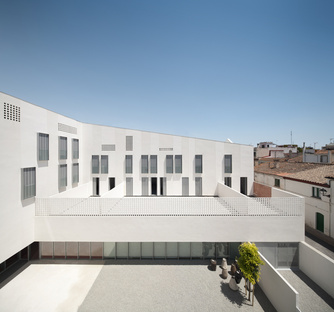 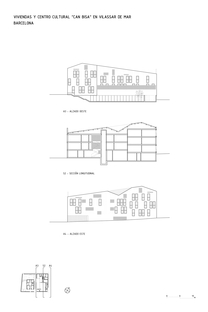 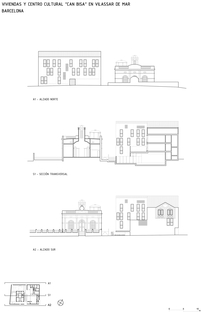 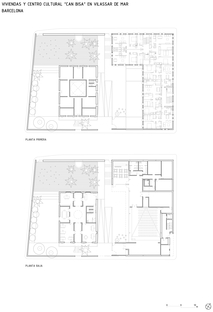 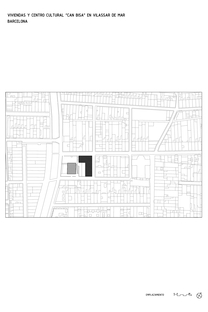