Hua Li, founder of TAO Trace Architecture Office, has designed a coffee interpretation centre in Lujiangba, Baoshan, in Yunnan province. Xinzhai Coffee Manor is a brick complex in which the arches and vaults characteristic of western architecture are built using local construction techniques. 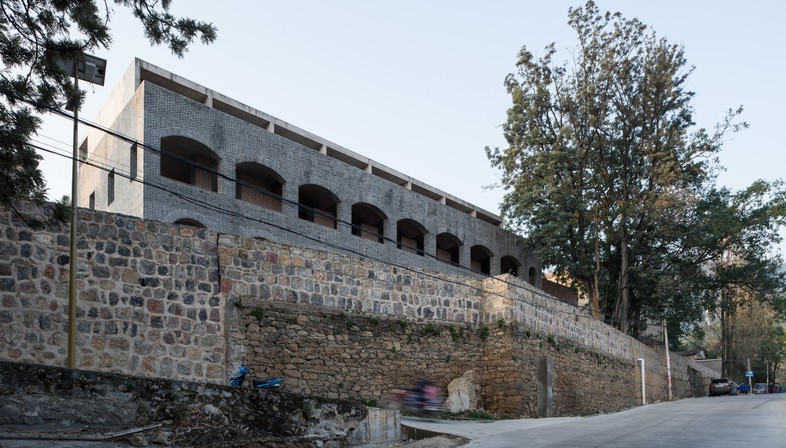 Presented at the most recent edition of the Biennale in Venice in 2018 as a key project in Chinese contemporary architecture, TAO Trace Architecture Office’s Xinzhai Coffee Manor in Lujiangba, Baoshan, in Yunnan province, seems to want to create a bridge between the traditional architecture and characteristic sites of China and those of the west. The rhythm of its long arcades, the most immediately recognisable feature of the project, and the choice of brick as the building material establish a bond with the land and its history while citing a construction process characteristic of the opposite side of the world. Critics have compared the complex and its brick vaults, set boldly in a Chinese landscape traditionally characterised by wooden structures, with Rafael Moneo’s National Museum of Roman Art in Mérida, a construction dating back to the mid-80s with an unadorned structure applied to the stylistic features of Roman architecture to explicitly evoke the solidity of constructions from the civilisation that gave rise to western thought.
The Yunnan region was drawn to the world’s attention in recent years by the definite reversal of a trend: what used to be the land of tea plantations has rapidly evolved into a coffee-growing region, converting almost all of its plantations to grow Arabica coffee, particularly popular among well-off young Chinese, to the point that the ritual of drinking a cup of coffee, non-existent in the country until only a few decades ago, has become a new status symbol.
On a plateau raised above the centre of the village of Bawan, TAO Trace Architecture Office designed a coffee interpretation centre with a hotel for Baoshan Xinzhai Coffee Co. Ltd. The new complex includes an abandoned grey brick cinema building built in the ’80s and a large garden with big trees on the building’s eastern side, an essential element for understanding the project. Unlike the widespread tradition of Chinese construction in which wood is the principal building material, the area has historically used brick as its basic construction material, due to the presence of a brick kiln which is still in operation producing grey bricks close to the site in question. The decision to work with brick and reinforced concrete is a result of Hua Li’s focus on the specific nature of the construction site, which suggests use of materials, idioms and techniques based on local tradition. One of the architect’s first projects to draw the historic heritage of its site is the Paper Museum, also located in the region of Yunnan.
The Xinzhai Coffee Manor is a complex of three buildings: the old cinema, renovated and converted into an auditorium and exhibition hall, the main building, containing an area for storing and processing coffee and the hotel, and a central volume containing a tasting room. Behind the three buildings, aligned head to head along the village road, an alternation of arcades and courtyards constitutes the external communication system. This is the landscape that appears in view as we climb up from the level of the village, contrasting with the natural setting of the valley to the south.
The main building has three levels, with the coffee warehouse in its basement. Hua Li designed ceilings with cross vaults recalling the crypts of churches and monasteries, while using bare brick recalling wine cellars. These large underground spaces made of brick are perfect for storing coffee under constant temperature and humidity conditions. One level higher up, at the courtyard level, is the area where the coffee is processed, with long steel girders and monodirectional brick vaults permitting open continuous spaces to be obtained for use in the roasting and packaging processes. Large windows at regular intervals offer views over the hills and the valley, as the environmental components of the process of preparation of coffee and as the scenic backdrop through which visitors stroll.
On the top level, the transition to concrete and glass also represents a conceptual turning point: the windows become larger, so that the interior and exterior interpenetrate and volumes are lightened, creating the ideal location for the hotel rooms.
Picking up on the association with monastic architecture, the curtain of buildings with its arcades and vaults provides the backdrop for three connected courtyards: the central courtyard, the tree courtyard and the sunken courtyard, which is on the same level as the coffee storage area. The component of perspective, reiterated on multiple levels and in multiple directions, accentuates the sense of structural solidity and symbolises a tradition that is still very recent here, coffee, the future of the region. 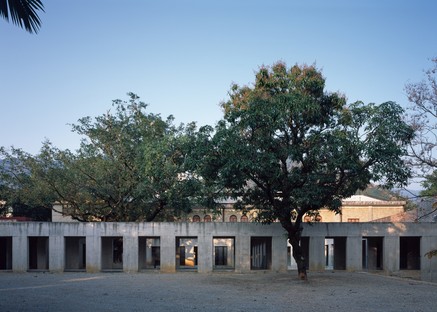 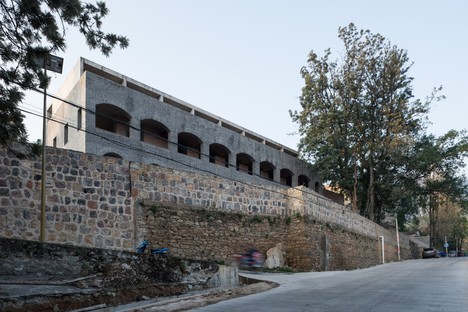 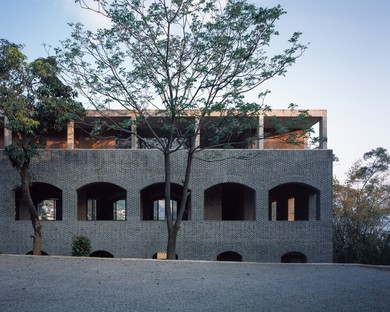 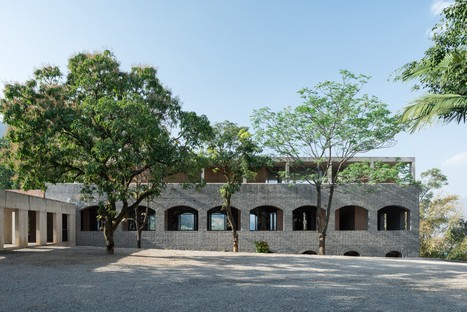 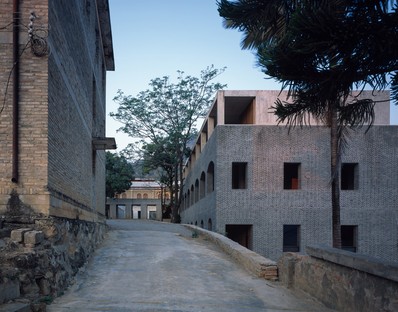 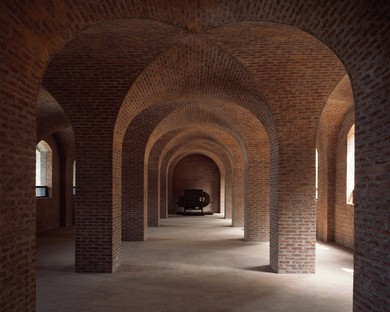 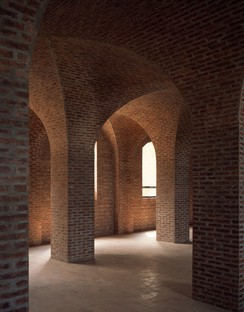 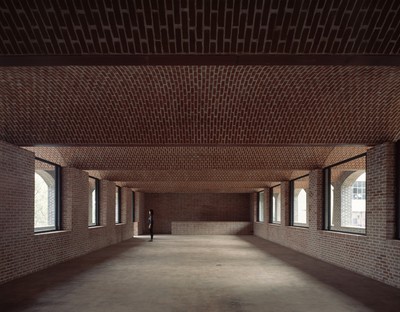 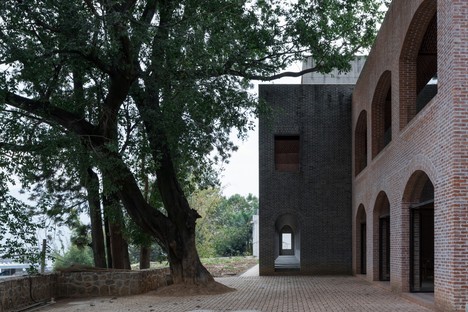 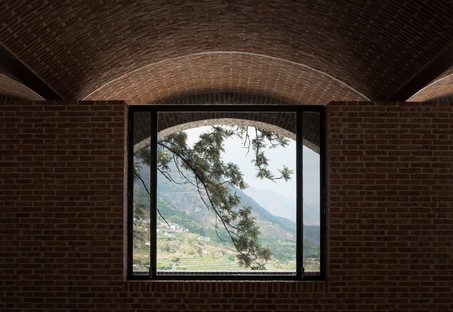 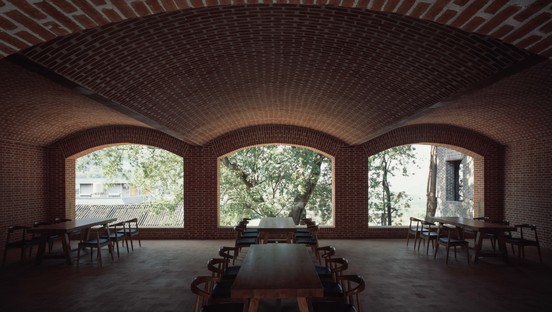 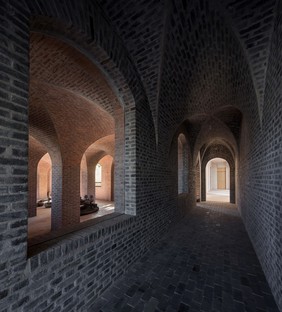 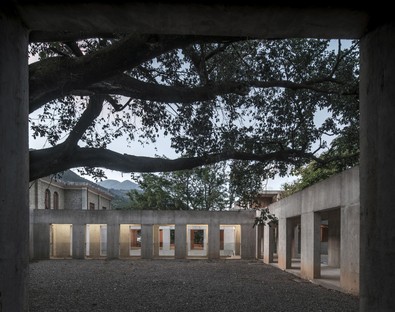 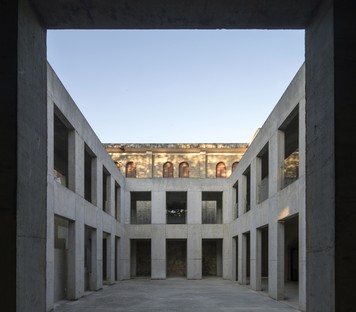 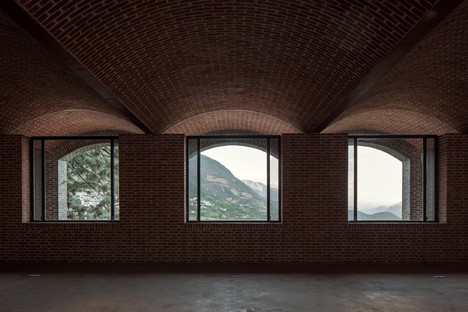 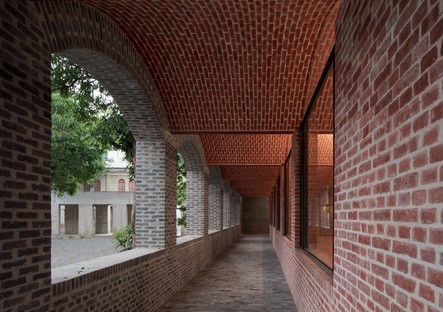 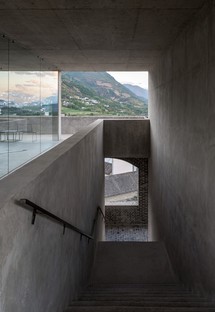 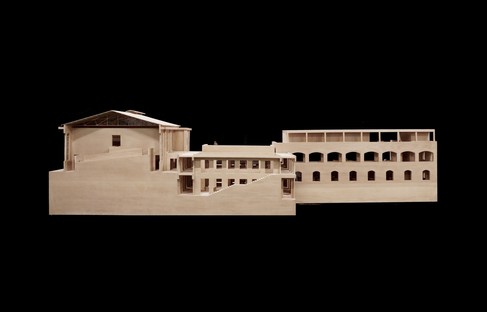 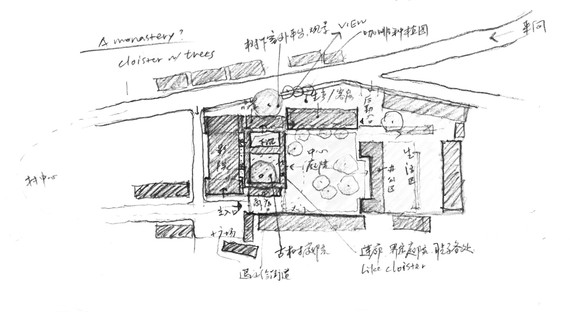 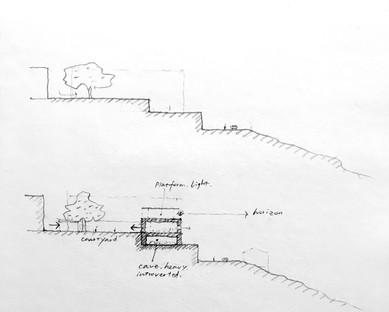