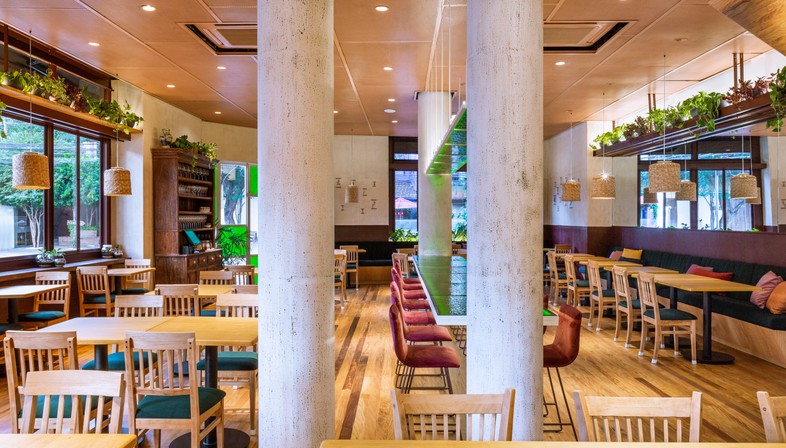 Architectural studio Superlimão designed the interior of a cosy new restaurant in São Paulo’s Jardins district, known for its international restaurants, tree-lined avenues and fashion boutiques. The restaurant’s simple name, Basilicata Trattoria, is a reference to the region of Italy from which the proprietors’ family emigrated more than a century ago, the inspiration for the restaurant’s cuisine, proposing and combining new flavours. The family came to Brazil in the early twentieth century and has been in the food business since 1914, when they opened a bakery in Bixiga, or Bela Vista, considered São Paulo’s “Little Italy” for the origins of the majority of the population. In 2017 the architects of Superlimão designed Empório Basilicata for the same clients, a shop – restaurant in the building containing the historic bakery. Both restaurants are now run by chef Rafael Laurenti, representing the fifth generation of the family that originally emigrated from Italy.

The new “Basilica Trattoria” in Rua Joaquim Antunes builds on the structural and material heritage of the restaurant that used to occupy the space, but with more contemporary traces for a modern, laid-back atmosphere. The operation picks up on many of the key concepts the architects of Superlimão had already expressed in the interior design of Empório Basilicata, with reclamation of original structural elements of the building and creation of open spaces that are flexible and adaptable to respond to changing needs. The Trattoria project reclaimed all the structural elements, restoring some of the decorations and furnishings of the previous restaurant, reused and reinvented to make the spaces cosier and brighter, with soft and colourful tones. The natural wood floors were restored, for example, and the big frames around the doors were repainted and preserved. A new colour was chosen for the metallic plate ceiling lining, while the brown metal plate covering the dining room was painted and sanded to give a new texture and colour to the same material. With a view to reclamation and upcycling, the architects even recycled the old green glass bottles that used to decorate the dining room, melting the bottles down and making them into big plates of bottle green glass, so that they become design elements characterising the big central countertop and the suspended light fixture. Specific actions with a focus on materials reveal the great care the architects take with the spaces, with the primary goal of ensuring great comfort while providing the restaurant with a sufficient number of seats.
The big countertop between the two pillars in the centre of the dining room, with a metal structure that covers its entire span with no floor support, fulfils this requirement, optimising the distribution of space and allowing the number of seats to be increased when required. 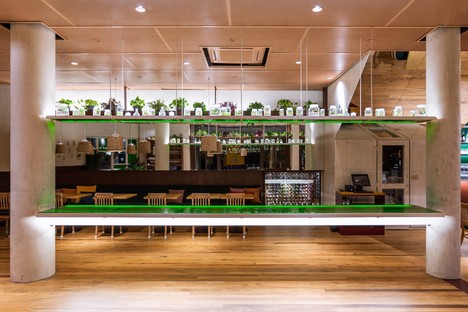 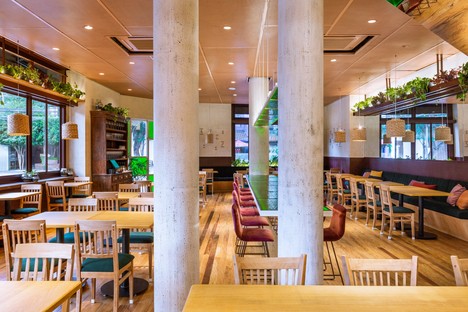 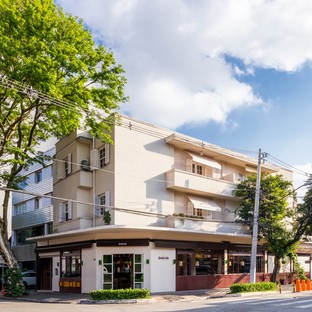 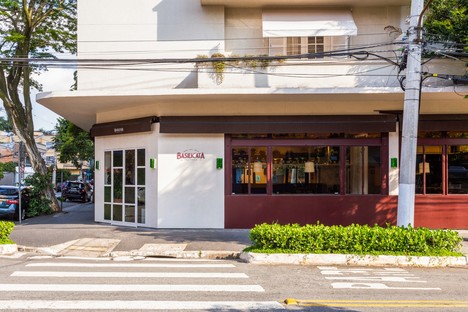 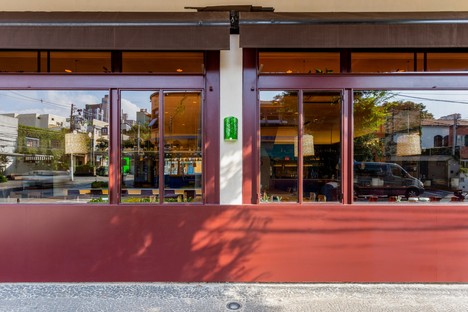 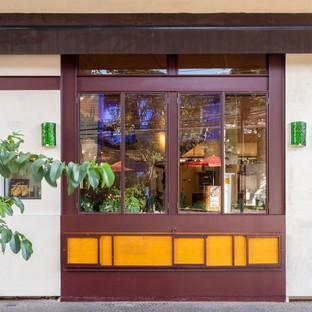 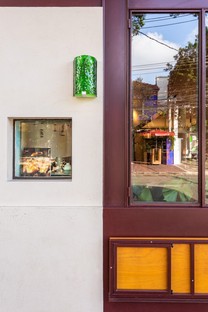 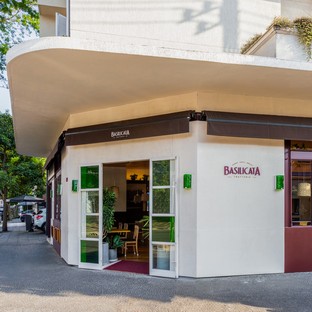 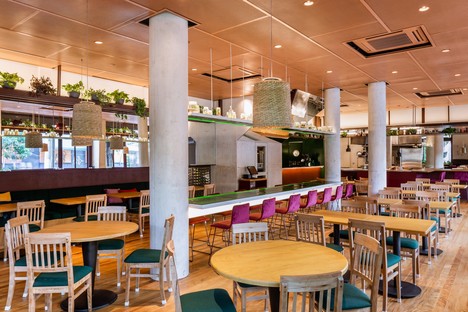 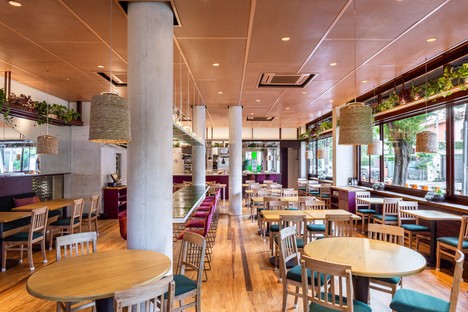 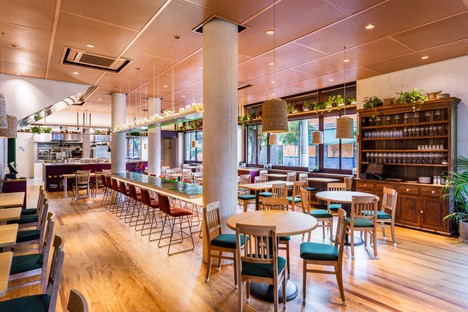 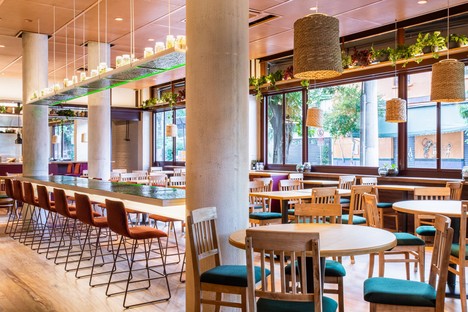 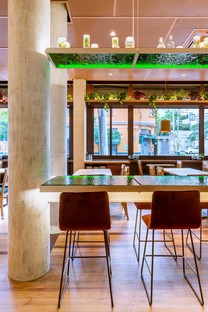 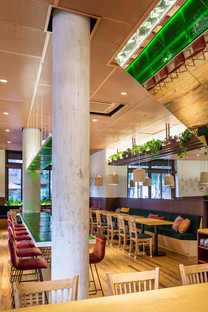 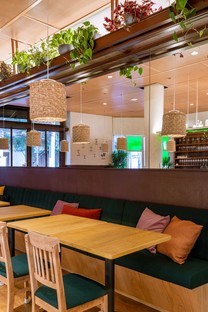 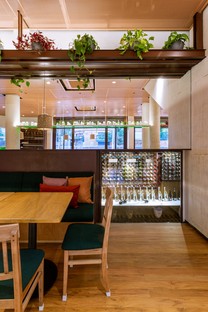 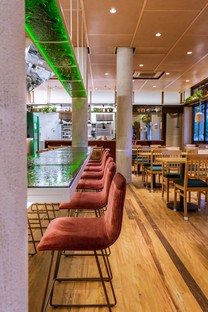 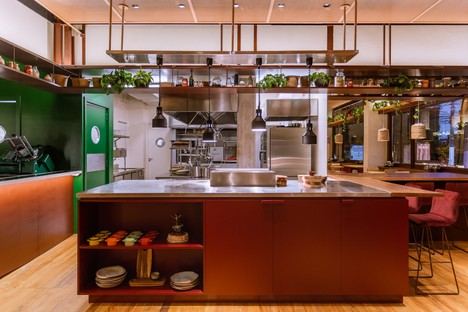 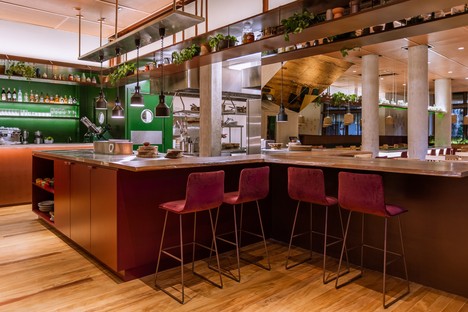 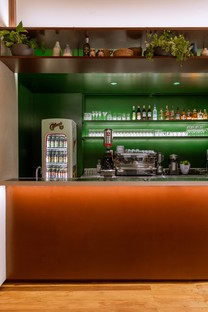 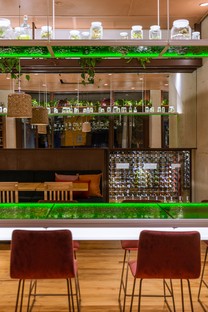 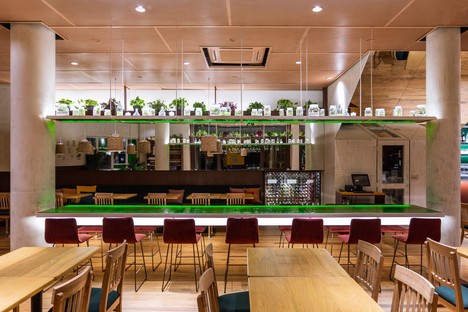 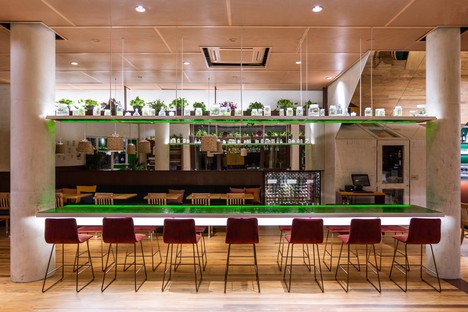 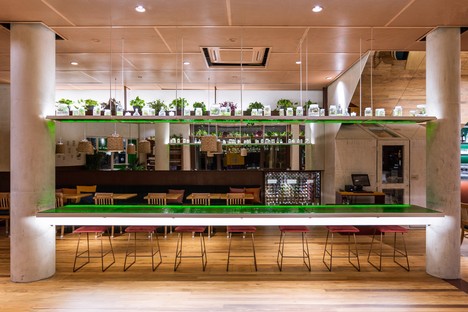 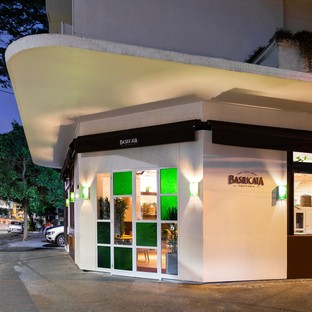