Beretta Associati planned the functional conversion of an office building in Milan, an early-twentieth-century building in a prime location between Piazzale Lodi and Via Sannio that originally housed the headquarters of a historic Italian mechanical company which has been repeatedly expanded and transformed over the years. The Lombardini22 Group supplied consulting services for the interior design and plant engineering in Beretta Associati’s recent project. Since the 90s the city of Milan has seen a number of important urban transformations that have reclaimed abandoned areas such as the Bicocca or completely renewed the city’s image, such as the redevelopment of the Porta Nuova, CityLife, and Expo districts. Plenty of projects on a smaller scale have regenerated key sites in the city’s urban fabric, such as the project recently completed by Beretta Associati for functional conversion of a building between Piazzale Lodi and Via Sannio, a strategic location in view of the major urban transformation projects currently underway and already completed in the area. The building converted by Berretta Associati represents an important part of Milan’s industrial history, an early-twentieth-century property that originally housed the headquarters of T.I.B.B. (Tecnomasio Italiano Brown Boveri), an Italian company concerned with train and railway vehicle design. The building has undergone successive renovation, expansion and reclamation projects over the years. The first of these, also by Beretta Associati, saw the building converted into the Milanese offices of an insurance company in 2009, while the latest project, begun in 2018 and recently completed, was carried out with the consulting services of DEGW, a Lombardini22 Group brand, for interior design and plant engineering. The new project was not limited to architecture alone, for the designers also took the building’s relationship with the public space around it into account, establishing new forms of dialogue with the building’s urban surroundings. Beretta Associati implemented a new project which adapted the building to the clients’ needs while making the most of the complex as a whole. The new project increased the flexibility and autonomy of various office spaces while improving the articulation of the building as a whole, which consists of three connected volumes. The architects designed a new entrance on Via Sannio, clearly identified on the outside of the building by a glass platform roof running along the façade and on the inside by a double-height atrium. The choice of colours and materials underlines the historic value of key elements of the existing main entrance on Piazzale Lodi, such as the pair of central columns.
The internal layout of the spaces, and the vertical links and multiple accesses, are organised and optimised on the basis of possible future divisions. The building’s new function also required work on plants to improve the building’s thermal performance and energy consumption. The architects reinforced the value of communal spaces such as lounge areas and the roof with a covered connection, and brought new life to spaces such as the lobby, now transformed into a brightly-lit all-glass meeting room. The renovation of the building was completed with new lighting design for the façades, giving the building a new image in the city. 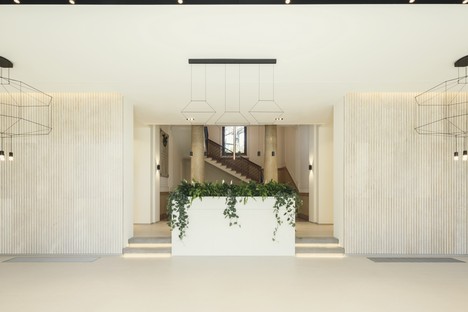 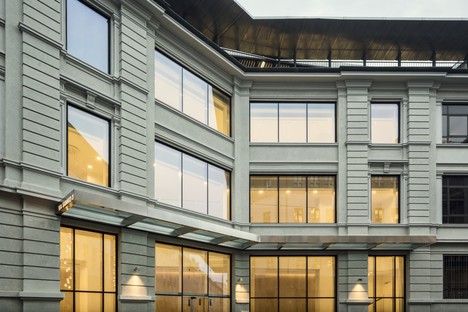 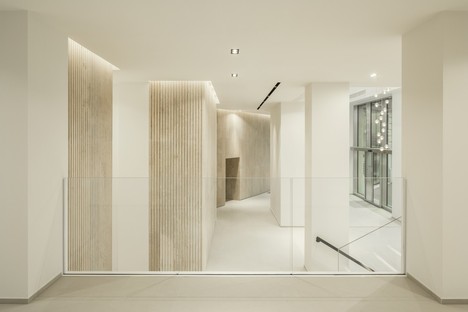 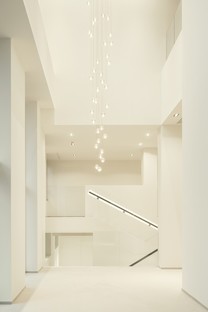 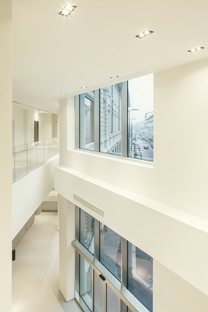 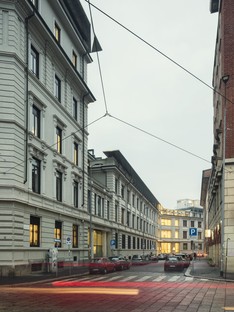 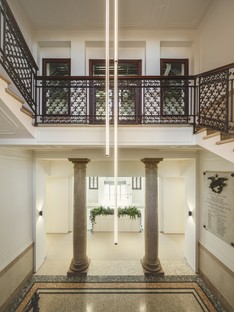 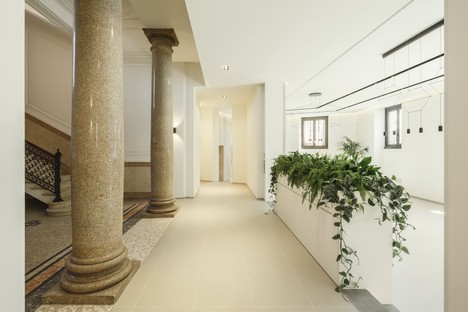 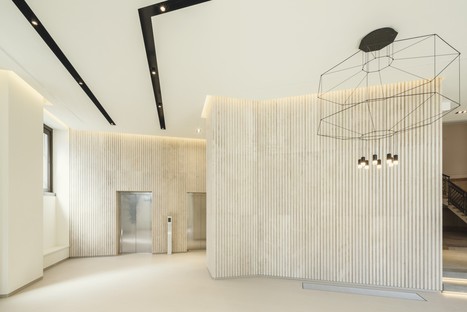