Parisian firm SOA Architectes has designed a new multipurpose building in the heart of the 13th arrondissement of the French capital. The building contains 75 residential units, a kindergarten and, on the lower floors, “La Fab.”, which the architecture firm itself has also designed as an interior for agnès b., a stylist, patron and collector who has spent many years supporting artistic creation in all its forms. Her initiatives are also aimed towards social solidarity and safeguarding the environment, and SOA Architectes’ design has provided a home for all of the patron’s various activities under one roof. 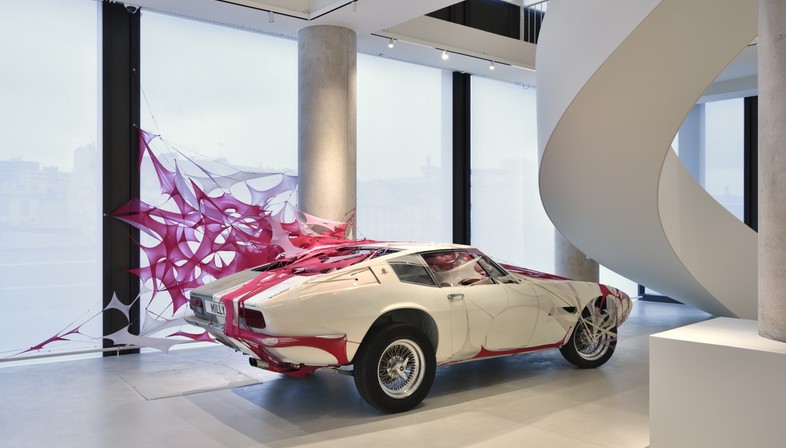 “La Fab.”, the new home of the contemporary art collection of agnès b., designed by SOA Architectes in the heart of the 13th arrondissement of Paris, occupies the base of a mixed-use building which also includes 75 public housing units and a kindergarten. Agnès b., a stylist, patron and collector, has spent many years supporting artistic creation in all its forms, including with initiatives aimed at solidarity and safeguarding the environment. The idea represented by “La Fab.” is to bring together all the patron’s activities under one roof with a strong iconic value: a project that found fertile ground in the building designed in the 13th arrondissement of Paris by SOA Architectes, the firm which won the design competition held by Paris Habitat in 2014. 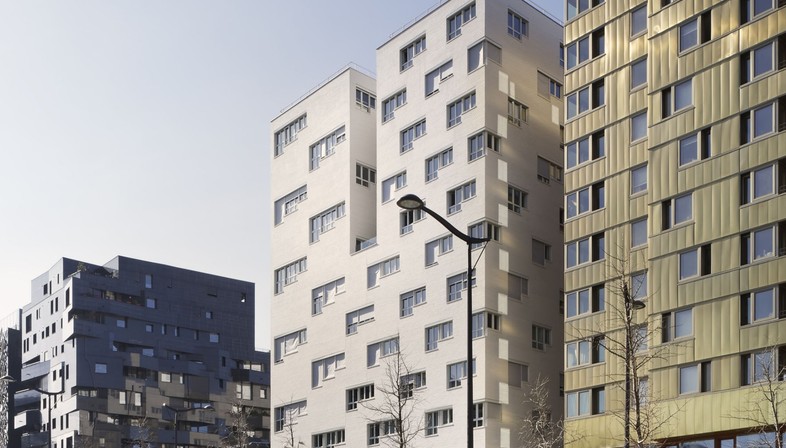 The architects reinterpreted the essential lines that characterised the buildings of l’Avenue de France in the 13th arrondissement, with the buildings lined up along the street and the entirely glazed façades of the lower floors. The need to construct a building on an “empty space” due to the presence of the underground railway line, to create an attractive building in the context of the public space and to offer welcoming residential units for social housing were just some of the stimuli and issues tackled by the architects and translated into elements, materials and designs capable of establishing architectural connections with the neighbourhood of Tolbiac-Masséna. The building designed by SOA Architectes is an iconic and complex block, piecing together a selection of different architectural styles which overlap in the vertical development of the construction and echo elements present in the 13th arrondissement. Each part of the building, characterised by its own individual style, corresponds to a specific function of the programme, and the overall result strikes the observer as a truly timeless building. The architects also play with gravity, reserving the transparent, ethereal section for the glass base, home to “La Fab.” and the kindergarten, upon which the heavy brick walls of the upper floors - home to the residential units - rest in an intriguing inversion of expectations. The first two floors of the building, which were originally intended for commercial spaces, were purchased by patron agnès b. in 2018, following which she also commissioned SOA Architectes to design the interiors in order to create exhibition spaces and the offices of “La Fab.”. With the consultancy services of Yves Dessuant, La Fab. has finally become an innovative programme in which the exhibition space, which is home to the art collection owned by agnès b., is at once a gallery, a bookshop and offices. At the structural level, the architects designed large, 9-metre-high concrete pillars for La Fab., arranged at a distance equal to the width of the railway tracks. All the available space is organised in the style of two large exhibition galleries connected by a single internal staircase integrated into the tour route. 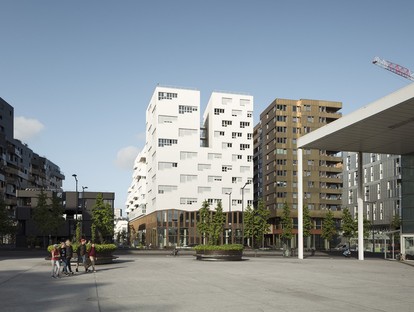 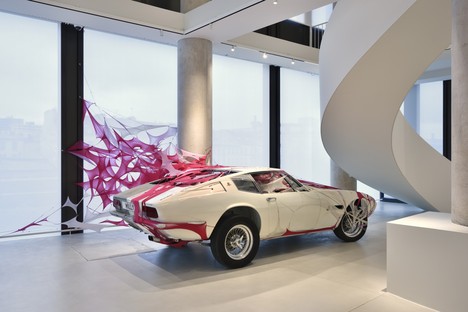 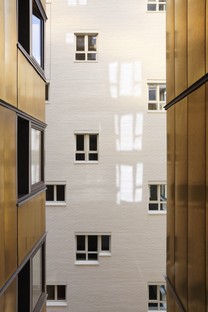 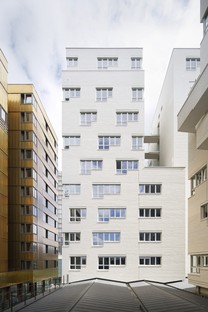 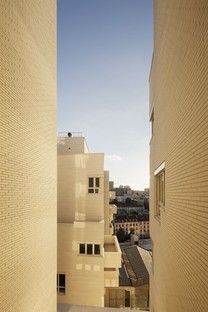 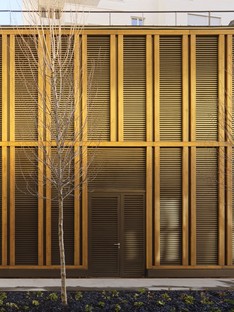 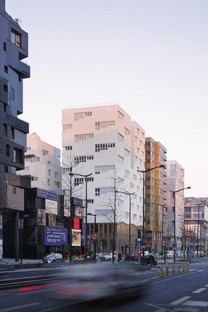 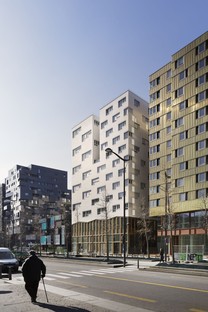 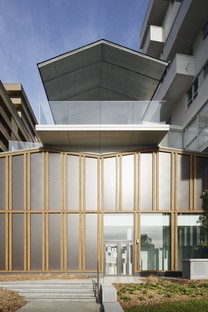 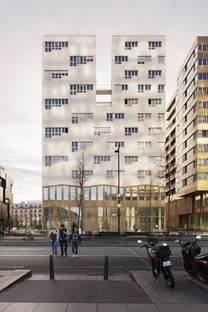 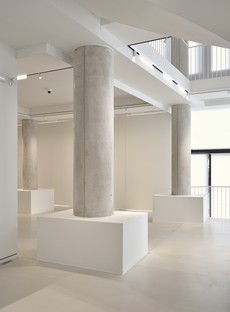 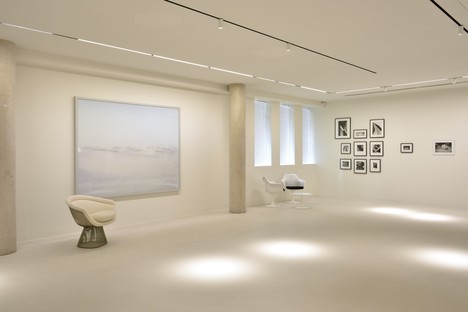 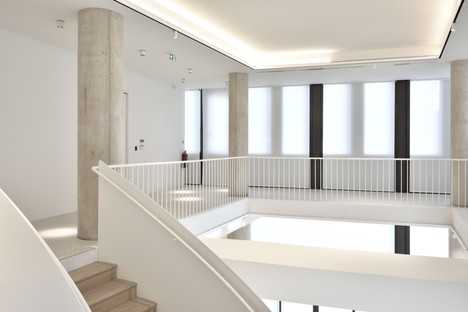 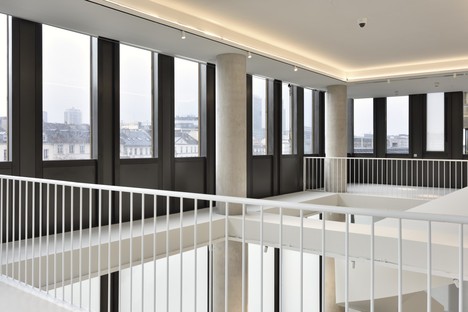 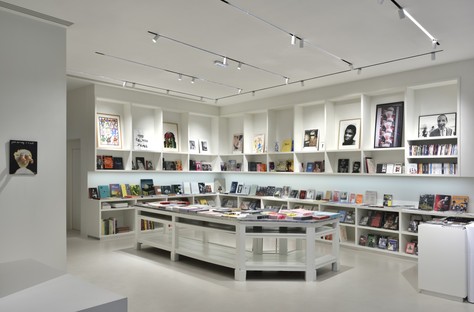