The Hérault Arnod Architectures studio has designed the Espace Mayenne in Larval, France, a multifunctional structure containing, in a single volume, a sports hall suitable for entertainment shows, a gymnasium with a climbing wall for international competitions and a conference hall. 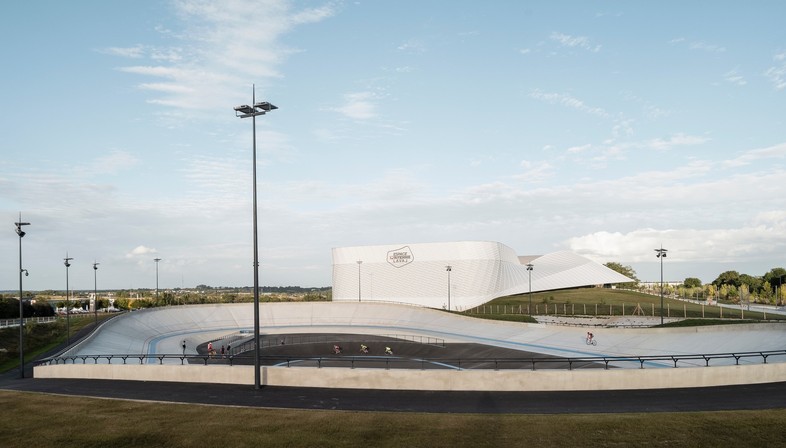 In Laval, a French city of medieval origin and famous for being the birthplace of the painter Henri Rousseau, known as Le Douanier or the customs officer, the Hérault Arnod Architectures studio has designed Espace Mayenne. A recently completed multifunctional structure consisting of a single volume containing three main halls and other supporting spaces, designed as modular environments to accommodate artists or sports guests. The three main spaces of the Espace Mayenne consist of a sports hall, also suitable for hosting shows with a capacity of 4500 seats, a gymnasium with a climbing wall for international competitions and a conference hall. Outside, a 250-metre-long cycling ring with a central training track, a 670-space car park and a landscaped area complete the project.
The intervention was carried out on a former military site west of Larval. An area undergoing an extensive transformation, important for the revitalisation of the entire city and which, in the future, will become part of a new neighbourhood. The Hérault Arnod Architectures studio found themselves face to face with remarkable local context, including from a landscape point of view. The site, in fact, includes a natural area with marshland, woodland and wet meadow in which an old pattern of sculptural trees and perfectly preserved paths is embedded. To enhance this area, the architects have designed a pedestrian and bicycle path in an east-west direction that crosses the public car park and the wetland area and then widens out as it approaches the building to form the entrance square to Espace Mayenne. As in other works completed by the firm, the architects' approach was systemic. Through their design, the architects sought to reveal the full potential and unexpressed energy of the site, while respecting the landscape context and the memory of the place. The organic aspect of the project has not been imposed on the territory as an artistic gesture but, rather, is the result of a careful study process, born out of the need to contain, in a single volume, the three main halls distributed across the site, according to their specific characteristics.
The façade, composed of a series of horizontally stacked stripes made of aluminium sheet metal, changes depending on the vantage point of the building. A flexible and dynamic plane that elevates itself at different points to reveal windows and openings, while at the same time, with its fluid movement, this metal skin envelops the entire complex, restoring the image of a unified volume. 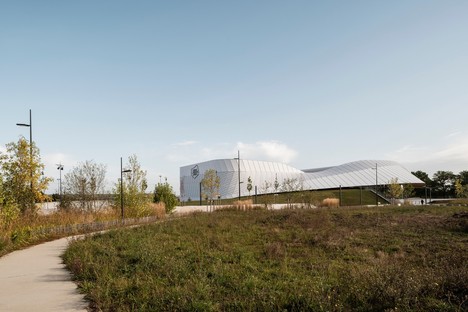 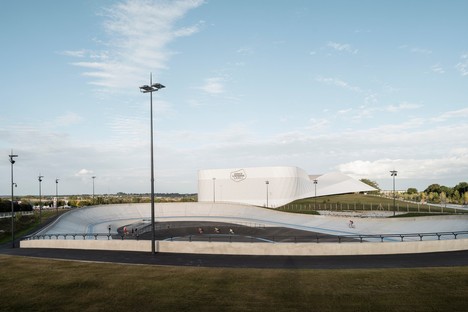 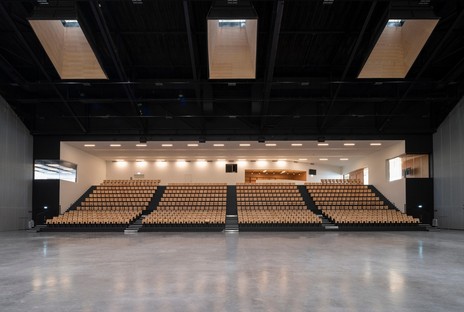 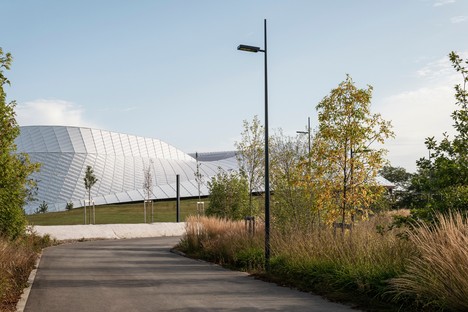 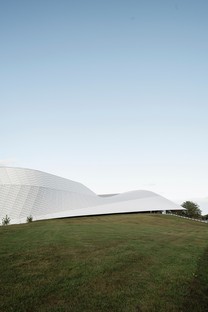 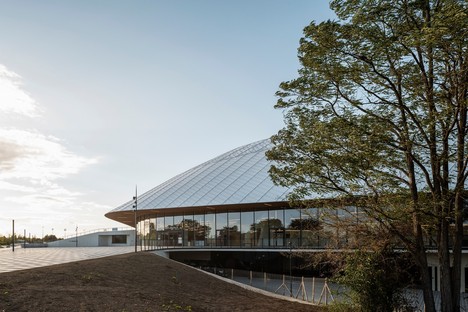 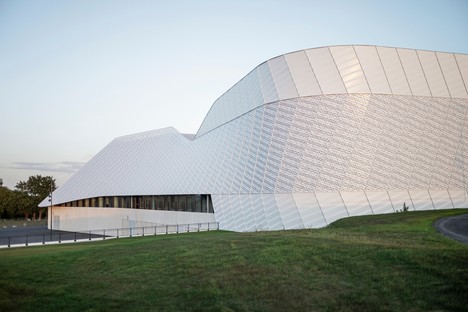 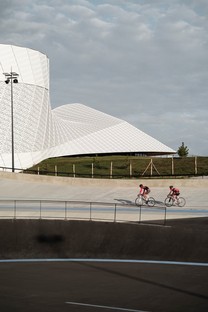 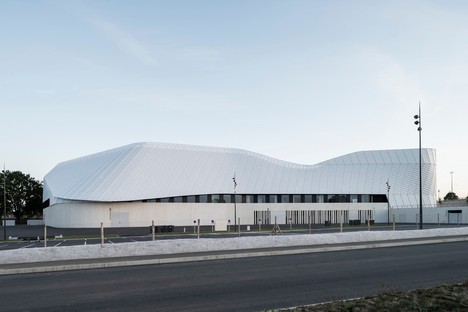 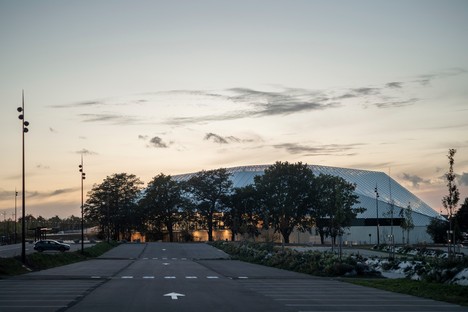 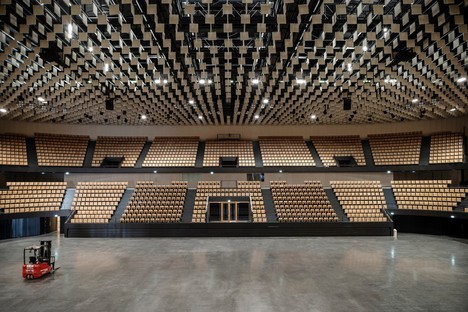 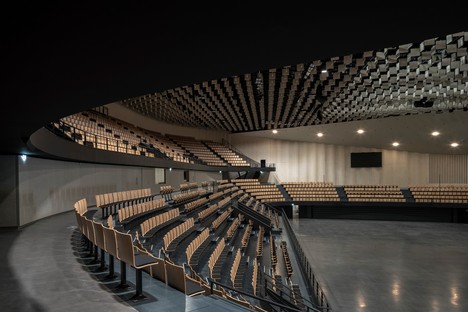 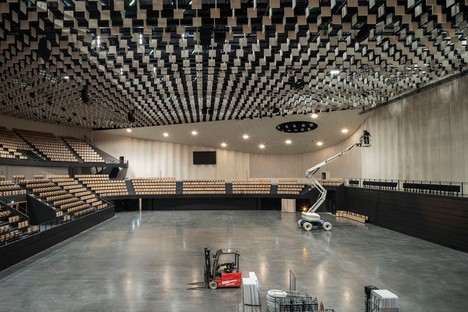 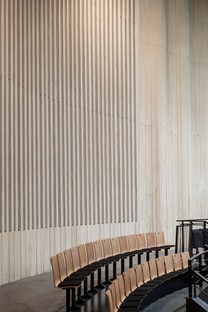 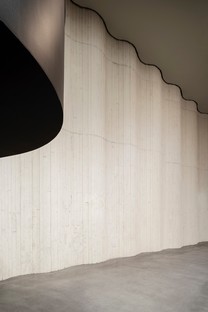 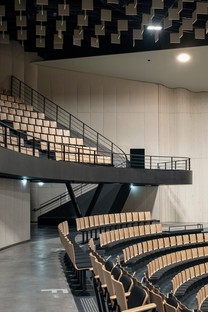 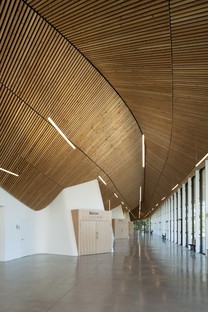 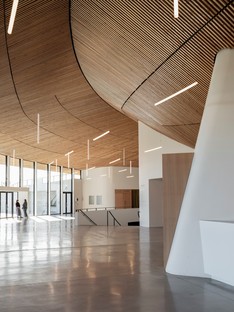 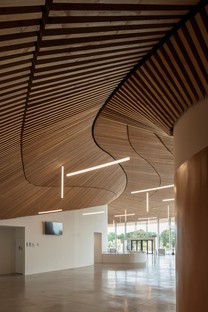 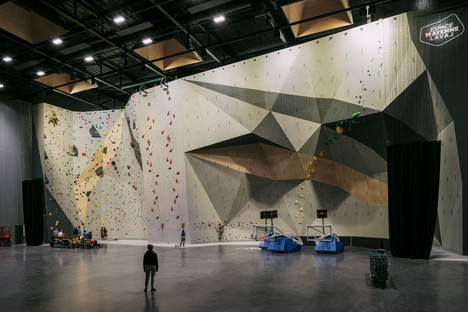