In Tsinghua Ocean Center in Shenzhen, Open Architecture has designed a symbolic building inspired by the sea, in which the model of the university campus with pavilions take the form of a broken-down asymmetrical tower which Open Architecture paints in all the colours of the abyss. 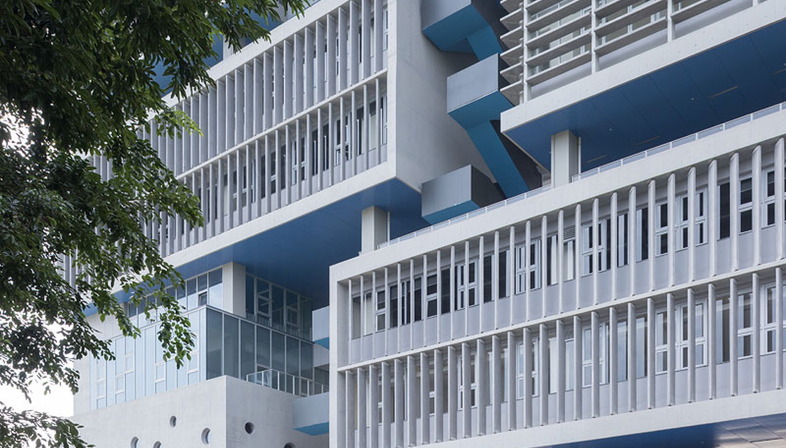 Tsinghua Ocean Center in Shenzhen (China) is the product of Open Architecture’s reflection on the theme of university architecture. The Chinese studio underlines the phenomenon of development of huge campuses outside China’s urban areas, leading to neglect of the aspect of social interaction among individuals. Far removed from all the services and connections associated with the city, these places are often constructed out of proportion, and tend to neglect human interaction.
The courtyard model of the university campus commonly used in the past is thus radically altered and seen from a new point of view, going beyond the idea of typically horizontal spaces for interaction in favour of vertical spaces.
Tsinghua Ocean Center, containing the laboratories and offices of the new oceanographic research centre, is the last building to be constructed in Tsinghua University Graduate School in Shenzen. Its radically new design makes it a symbol of the world of the oceans and a part of the university concerned with experimentation, renewal and advanced research. Open Architecture has designed a 15 storey tower in which every level is different, where the offices and laboratories are horizontal blocks of different sizes set one beside another without intersecting, but communicating both horizontally and vertically through public areas for socialisation. The courtyard’s role in the traditional layout of the home is translated into transitional spaces between floors with stairways and elevators which not only connect different levels but offer places to stop to contemplate the landscape and use of public space. Conference rooms, brainstorming areas, an exhibition space, studies, coffee shops and other communal facilities vertically divide the private laboratories and offices while at the same time serving to join them, promoting dialogue and exchange of ideas. All the installations are arranged around the short outside walls and enter the laboratories via false ceilings, so that all the space inside is free, and can be rearranged to suit the work going on inside it.
This compositional system divided into parts produces a fragmented form of architecture which nonetheless retains all its impact and its monumental style. Compact and closed-in on its east-west axis, the building is open and transparent on the north-south axis, aspiring for the image of an electronic circuit, an advanced mechanical component, the appearance of which conveys the desire for innovation.
Its bold verticality is further underlined by a podium that raises it up, just as it raises the people who access it by climbing the concrete staircase leading to the multimedia space. The plaza leading into the lobby and exhibition area is dug into this base, with a very important reservoir for marine research right below it.
Like abstract sculptures in the plaza, three conical skylights convey natural light underground.
The presence of the sea is also evident in a number of symbolic features, such as windows that look like portholes in the concrete walls of the short sides of the building or the intrados of the levels, painted blue, a blue that gradually changes in hue to allude to the changing hues of the sea at different depths. The sunbreaks on the building’s long walls, a technical feature permitting use of natural ventilation inside the building, underline the marine metaphor: every element has a different inclination, creating motion of light inspired by Debussy’s “La Mer”. 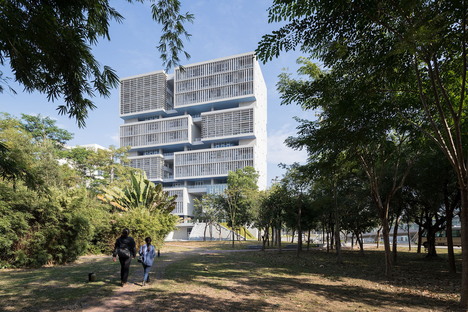 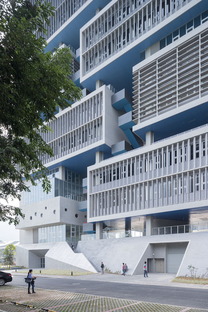 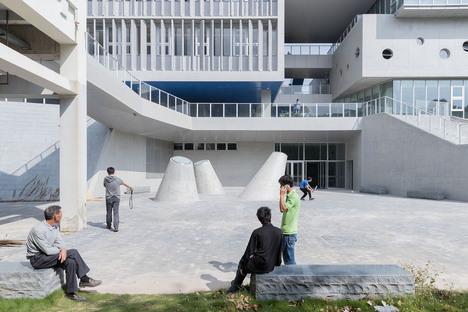 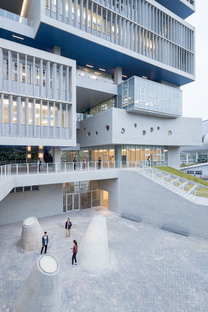 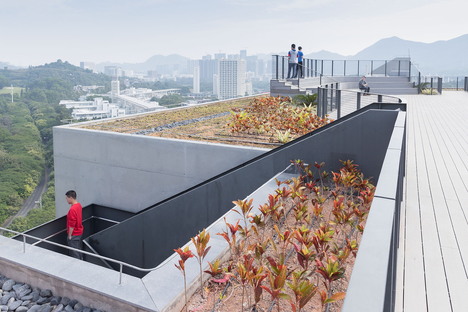 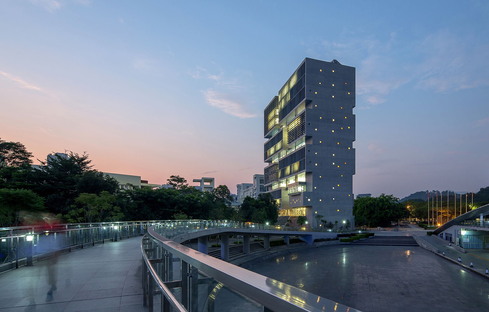 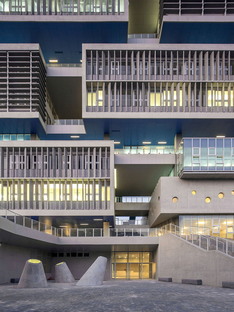 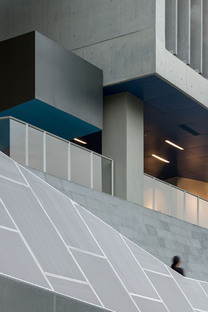 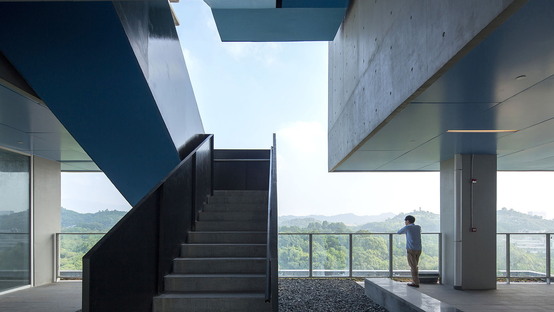 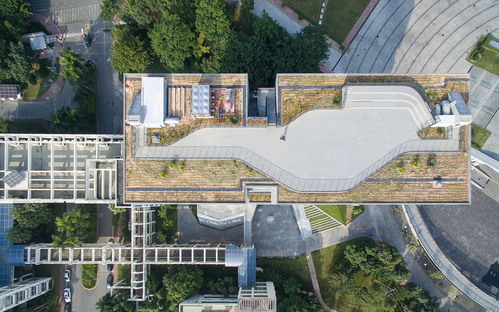 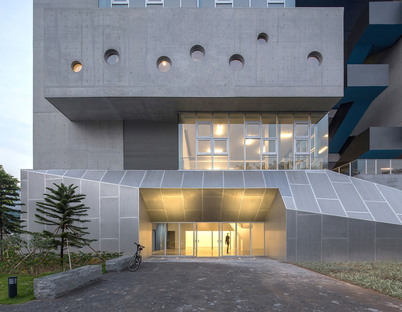 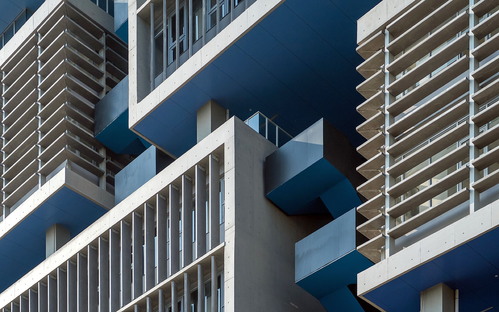 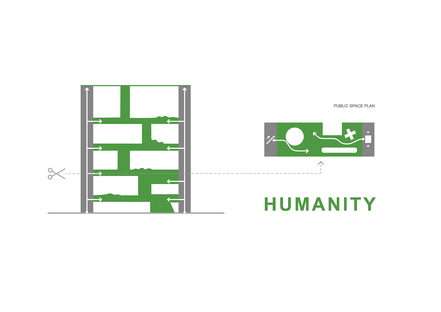 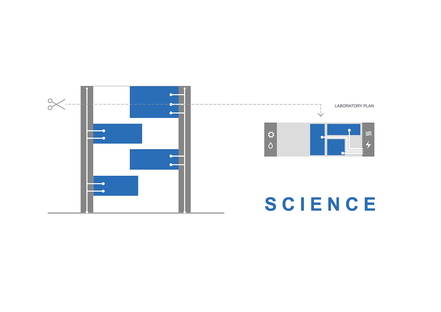 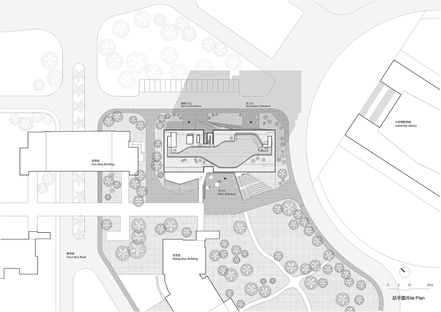 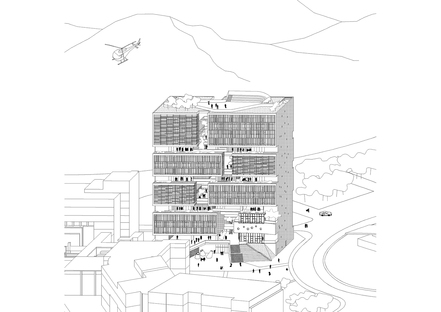 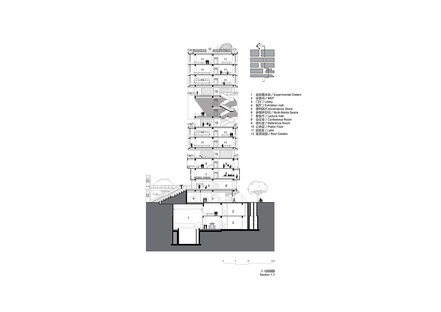