OOPEAA Office for Peripheral Architecture designed the Riihi house in Alajärvi (Finland), a home that updates the model of the Finnish farmhouse built around a central courtyard, with red fir cladding both inside and outside and great energy efficiency. 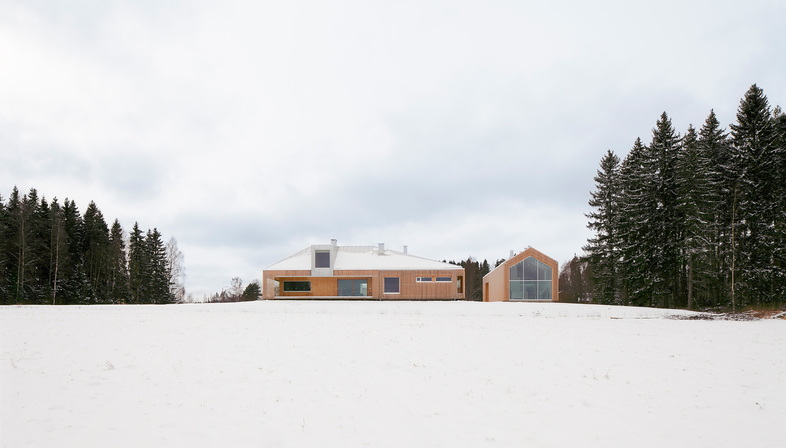 The Riihi house designed by Helsinki studio OOPEAA Office for Peripheral Architecture is located in Luoma-aho, in Alajärvi, a small village in Southern Ostrobothnia in Finland. The Riihi house – Finnish for barn – is a building inspired by the traditional Scandinavian farm, in which one or more timber buildings face onto a courtyard. The search for a local model familiar in the people’s imagination led to architect Anssi Lassila of OOPEAA’s choice of timber for the frame and façade of the home and subdivision of the three main functions requested by the client, the home, garage and studio, into three separate volumes built around a single courtyard.
There is a relationship of direct dialogue with the home, an L-shaped pavilion with lots of windows that seem to embrace the courtyard. A relationship of proximity with the garage and a denied relationship with the studio, the main part of which, the part used by the artist, is completely shut off from the courtyard, opening up to the north, toward a little stand of conifers, and to the east, toward the endless expanses of fields.
In this village in the middle of Finland, with a population density of 10 inhabitants per square kilometre, the Riihi house meets the requirements of space, perspective, and relationship with nature of a family consisting of a businessman, an artist and their two children. The austerity of the interiors, completely clad in red fir, with minimal bedrooms, is a declaration of intent: the home is a place affording shelter from nature, but at the same time a place for contemplating nature. Nature comes right into the mother’s studio through the eastern wall, two floors high and made entirely of glass; here, the wooden cladding is painted white to make the interior brighter. The alternation of solids and hollows in the walls around the perimeter is a symptom of a struggle between the need for protection against the rigid climate and the urgent need to break down these barriers to permit a visual relationship between inside and outside.
The interior layout is set slightly back from the external perimeter to make room for three verandas, two facing the inner courtyard and one facing outwards, offering mediation with the landscape.
All the buildings are built on a single level of double height, confirming the model of the riihi on two levels. Only in the home is there a staircase to the upper level, where a bridge leads to a big south-facing window: the eye of the home, its highest viewpoint, with views extending further into the distance. At the top of the stairs one finds oneself alone with the landscape, framed by the big window and the wooden walls; this space has no particular function, but can be used for anything, reading, playing, lying down, chatting. The space is also a light stack, letting daylighting into the big living room below.
Designed to fit into the history of the place, the home will be completely recyclable at the end of its life cycle: all the metal parts are made of aluminium, while the structural parts are made of wood or paper. The house is self-sufficient in terms of water, electricity and heating. And in formal terms, the cladding made of thin strips of wood, the aluminium roofing and the base raised just a few centimetres above the ground give the house a lighter appearance, almost a temporary character. 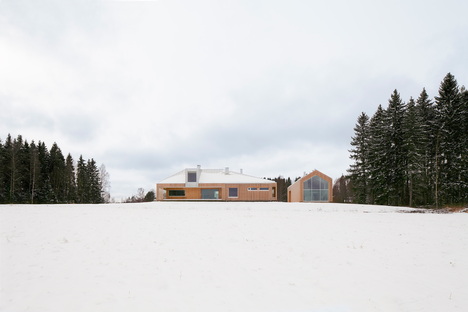 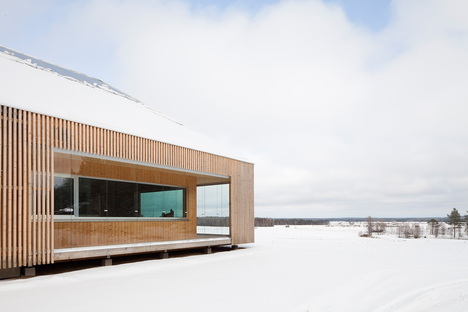 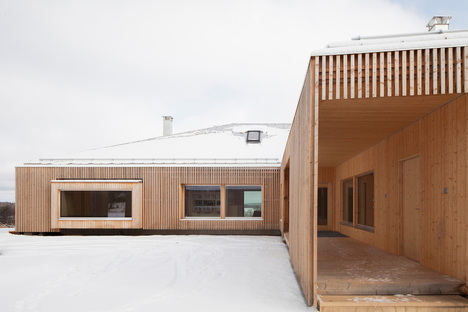 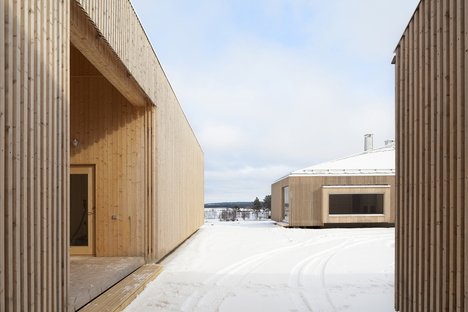 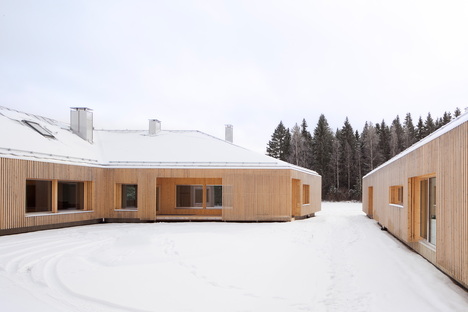 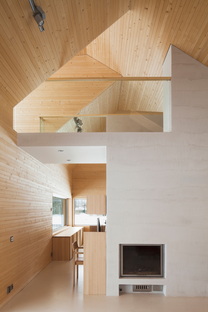 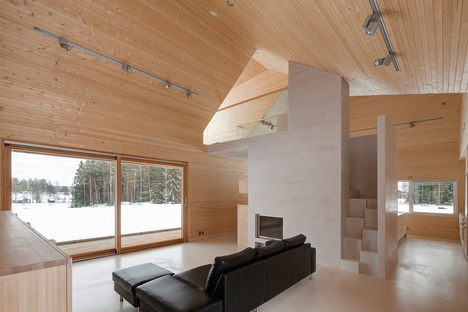 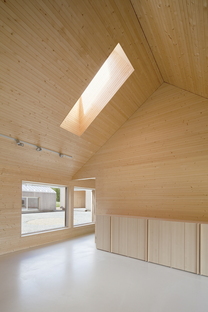 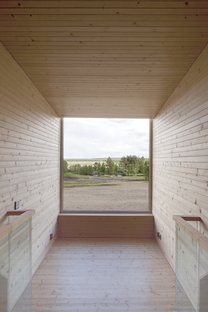 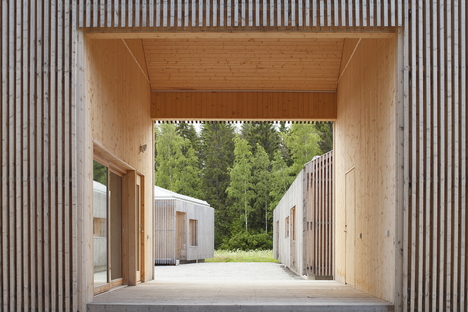 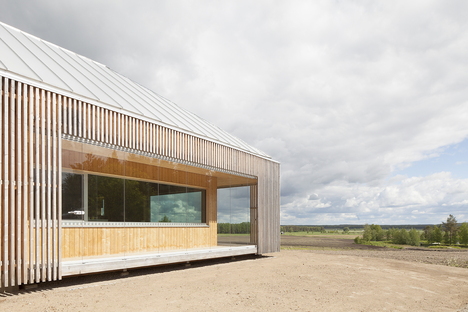 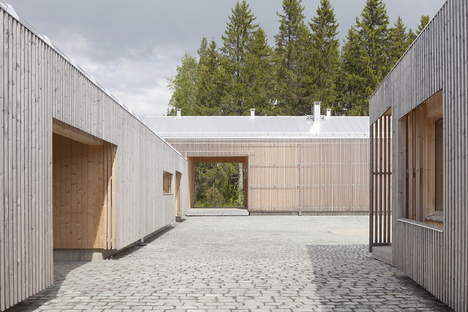 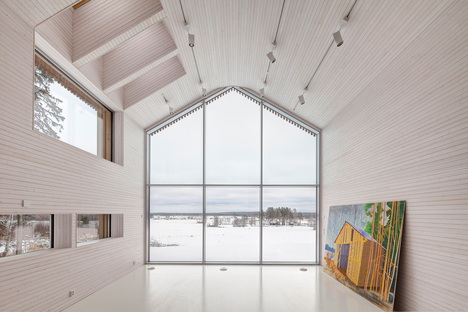 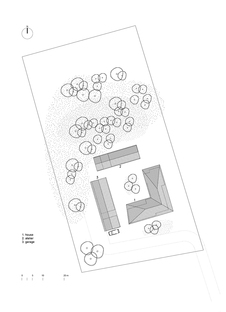 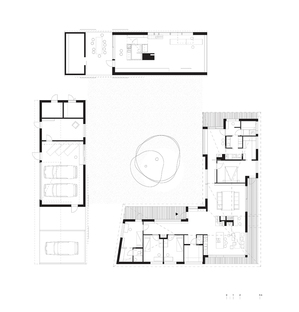 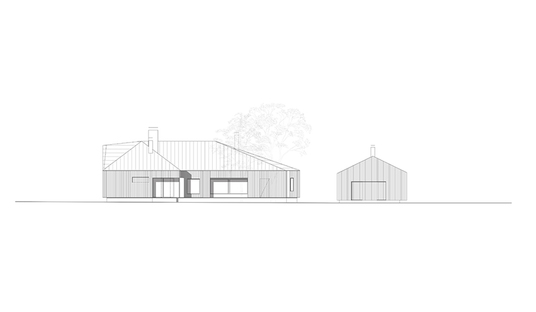 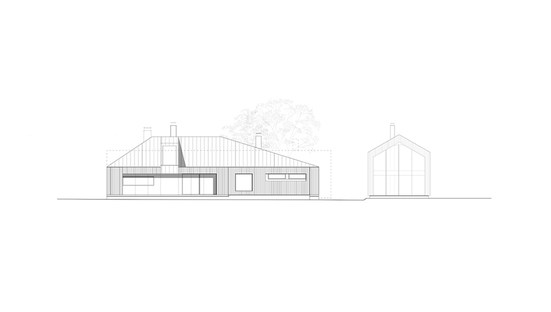 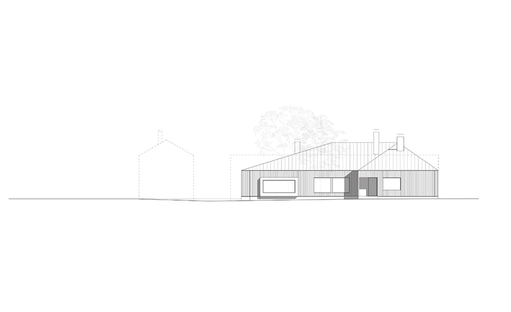 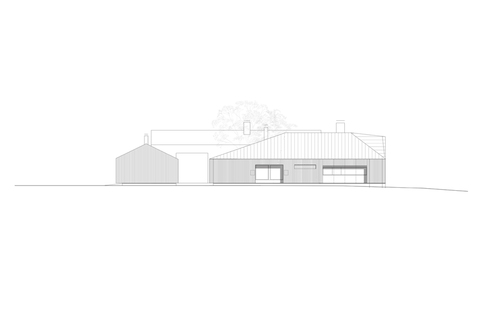