With the aim of putting the patient at the heart of the design, JKMM has created the Hospital Nova in Jyväskylä, following a new model for a healthcare environment and a new floor plan. A large atrium is the landing point for emergencies and provides access to all the various departments. Meanwhile, the in-patient wards are inspired by the concept of a hotel. 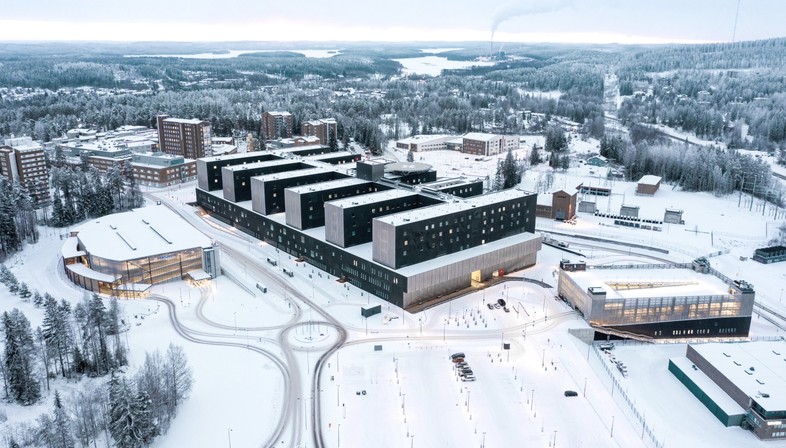 The region of Central Finland is the largest non-university hospital district in the country. The Hospital Nova, built in Jyväskylä between 2016 and 2020 based on a design by JKMM Architects, provides specialist medical assistance services to 275,000 inhabitants across the region, as well as basic healthcare services to around 56,000 residents of Jyväskylä.
These figures say a great deal about the importance of the project, but in order to truly appreciate the added value of JKMM’s work, one should know that it was born out of a need to rethink the very concept of the large healthcare centre serving an entire region.
Working on this task, which was originally undertaken more than 10 years ago, as part of his studies at Aalto University in Helsinki, Teemu Kurkela, a partner at JKMM, headed up a research project in which he developed theoretical models for the hospitals of the not-too-distant future. Designed to replace the city’s old healthcare centre, the Hospital Nova is the first innovative project so far in a sector that has long suffered from not only aging facilities, but also a lack of new healthcare models.
According to the analysis carried out during the design phase, it is the first large general hospital to be built in Finland since the 1970s. Since the mid-20th century, the dominant architectural model for new-build hospitals has been the so-called “tower with a podium” style. This model was created when healthcare was centred around keeping patients in beds within the hospital for long-term care. As a result, the number of beds needed to be maximised, with urban hospitals growing vertically, hence the ‘tower’ element. Today, quite the opposite is true: the policy is to keep patients in the hospital for as short a time as possible (the average inpatient stay is only two days), and so the new design orientation promoted and followed by JKMM minimises the number of inpatient beds and instead seeks to support and improve care processes. As such, the first port of call was not to address the appearance or external impact of the architecture, but rather to overhaul the design starting from the rooms. The team worked on what frustrates and upsets patients and their families above all else, namely orienting themselves within a large hospital - the idea of spending a long time trying to find their own “path to recovery”, or even getting lost.
By placing the patient at the centre of the healthcare system and looking at the hospital from the patient’s point of view, rather than that of the healthcare processes, as was the case in the past, JKMM started by transforming the floor plan of a traditional complex. The firm’s design has evolved compared to the model of the large-scale, often labyrinthine building, disjointed into its component healthcare sectors; instead it creates a unitary structure that is well-oriented and designed according to its functions. Four separate building typologies have been identified and incorporated into the building: Hot Hospital (surgeries and specialised care), Hotel (wards), Health Care Shopping Mall (outpatients) and Factory (supporting functions). Using a model similar to that of shopping centres and airports, all hospital functions are organised along a long public atrium that also represents the central axis of the design. This is a three-storey-high space which is directly accessible from the entrance, where visitors can orient themselves easily thanks to sightlines through the departments on each side and the subdued lighting. The use of soft colours and surfaces such as natural wood inspires a sense of homeliness. Decorative ceiling lights emphasise the spaciousness of the area, whilst curved elements arranged all along the atrium invite visitors to move through the space.
Located directly off this long gallery are 360 consultation rooms, which have been renovated conceptually. No longer considered the ‘fiefdoms’ of the various types of staff, with specialised equipment reserved for specific uses, these rooms are instead all standardised, fully equipped and shared by different medical specialties. The patient is seen here in the first instance and stays in the same consultation room for the entire duration of their treatment, with the medical staff moving around the hospital to see patients instead. Specialists have been encouraged to leave the confines of their offices and take a step towards their patients as people, as well as to work with their colleagues in consultation spaces for regular meetings, thus ensuring a more holistic view of the profession and a better overview of the patient’s state of health.
Furthermore, a selection of patient reception and comfort services have been installed along the length of the atrium, including a restaurant, a seminar room, and an “art courtyard”. For children, there is also an open area playground designed using log structures, offering a window into nature within the built environment. 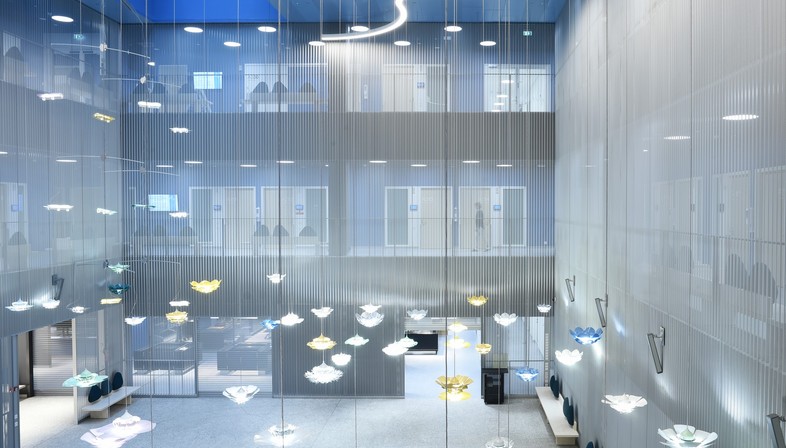 The functions open 24/7 have undergone a dramatic transformation, and have now been centralised in the so-called Hot Hospital. The emergency, diagnostics, intensive care and surgery units - i.e. the key elements for the proper functioning of any large hospital - have all been gathered into a single unit which occupies just 25% of the hospital’s total surface area.
The Critical Patient Pathway ensures rapid movement of emergency cases to operating theatres.
Finally, the Hotel department represents a new approach to the idea of the in-patient ward, in which careful attention to the interiors of the patient rooms was central to the design: vast windows, decorative wallpaper and homely wood for the furnishings, paired with the metal of the healthcare facilities, all help patients to feel comfortable and at ease. In terms of the interior design, every area has been treated with particular care and sensibility, taking nature as a key point of reference. Indeed, it is well known that the Finnish have a strong connection with their homeland, and the nearby pine forests, hills and lakes so familiar to all those who use the hospital - as well as the references to these natural elements within the building - create a meaningful connection, according to Laura Hämäläinen of JKMM. 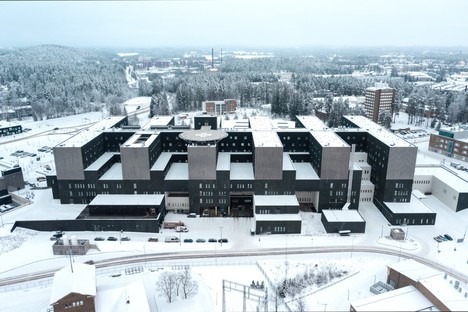 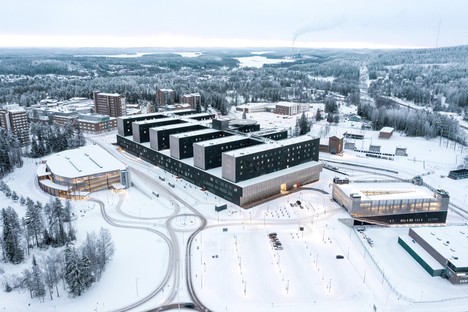 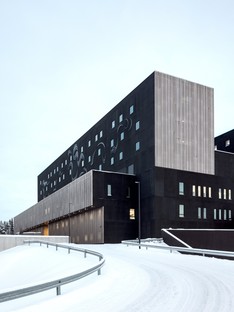 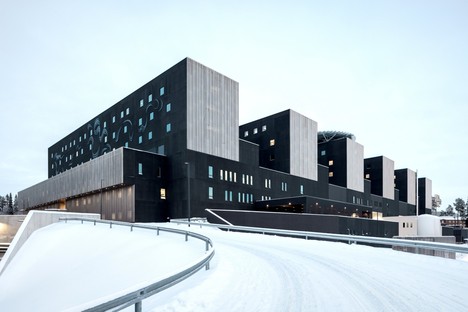 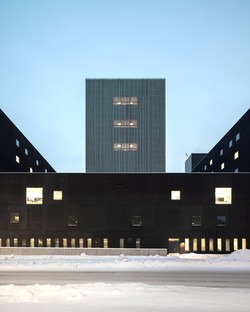 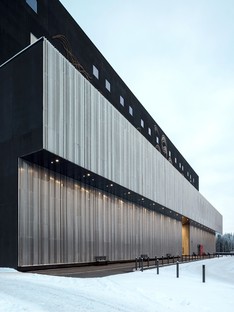 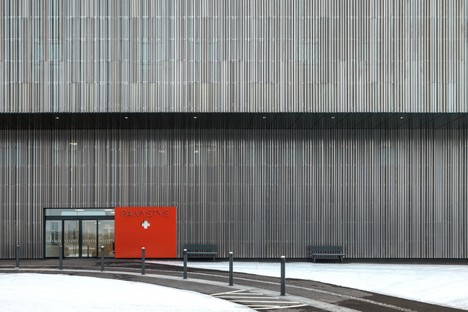 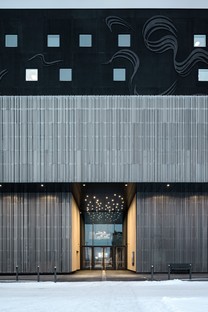 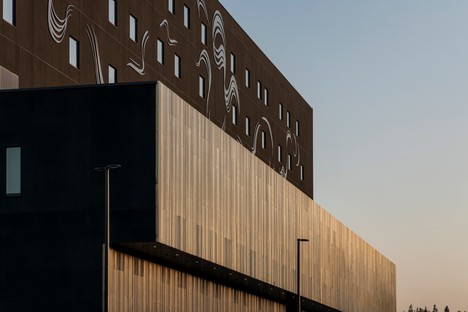 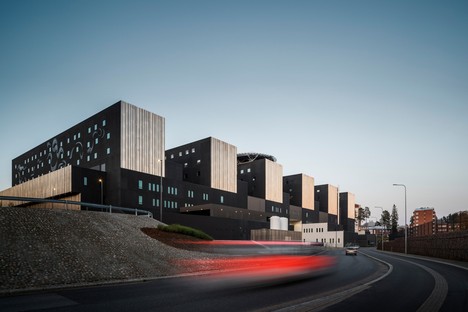 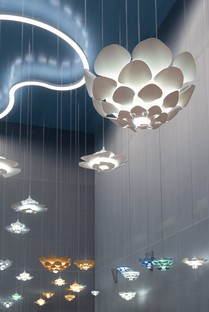 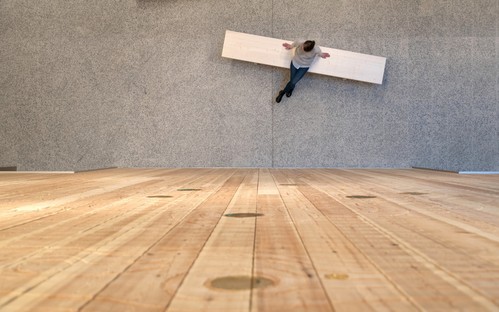 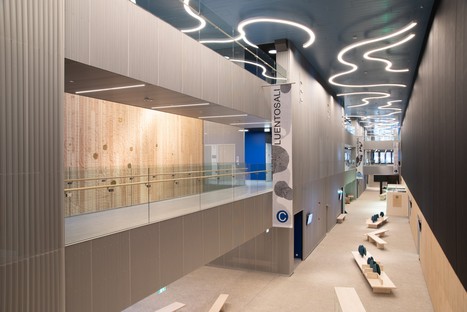 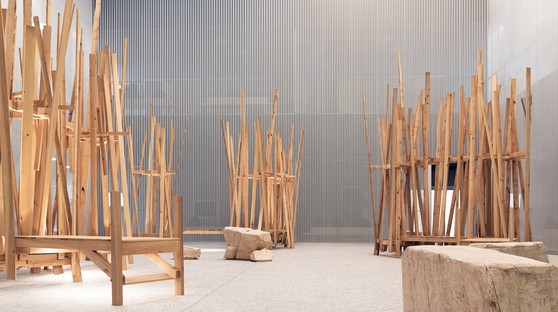 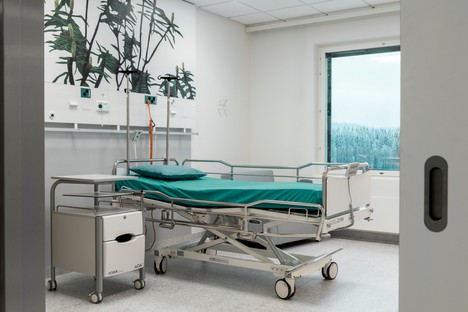 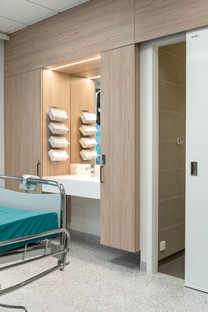 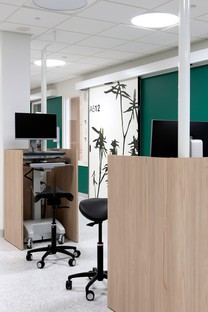 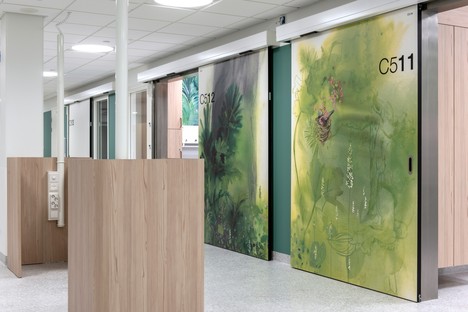 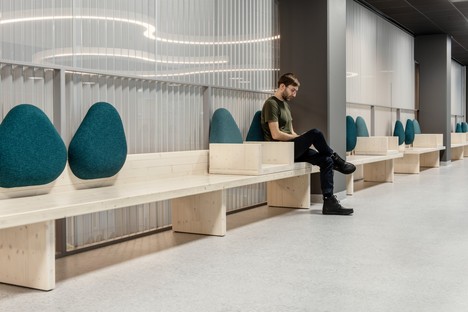 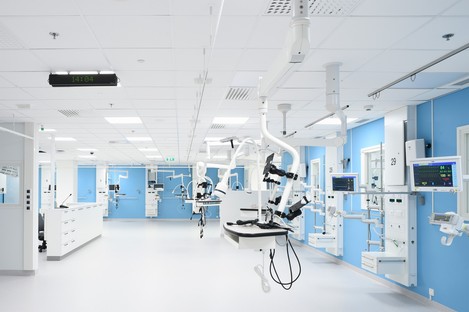 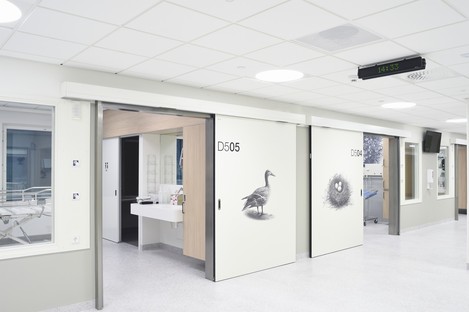 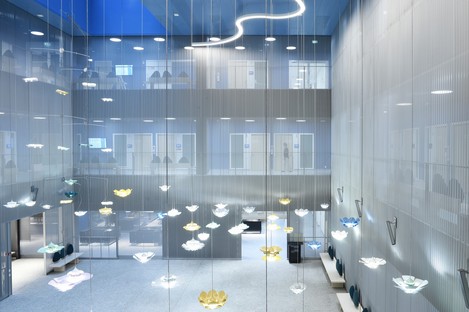 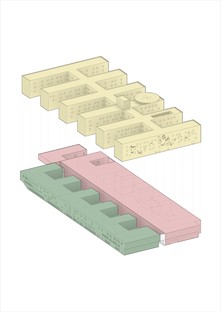 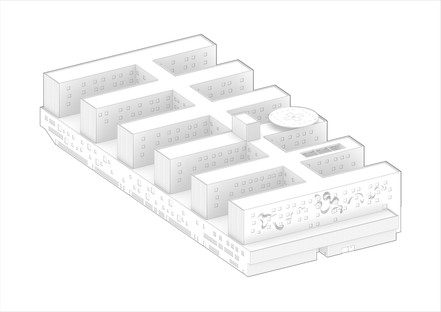 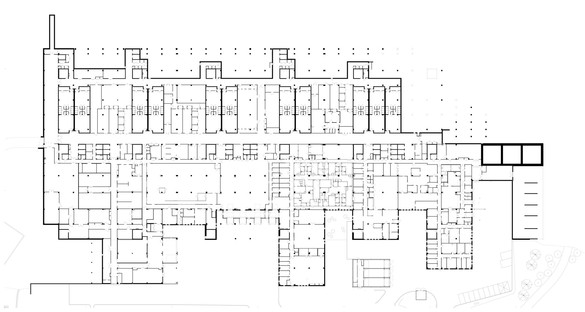 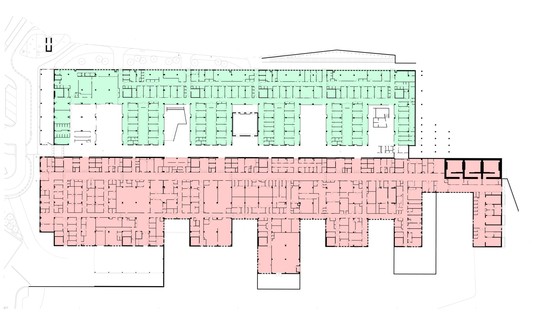