On June 22, the new garden of the Casa Coccapani nursery school was inaugurated. The structure’s existing green space was significantly redeveloped thanks to the programme promoted by the Fondazione Iris Ceramica Group, in collaboration with the Municipality of Fiorano Modenese. The project of ideas that creatively transformed the existing green space into a "planetary garden" was conceived by architect Bruna Sigillo, winner of "Next Landmark 2020", the international contest promoted by the Fondazione Iris Ceramica Group and by the Floornature architecture portal. 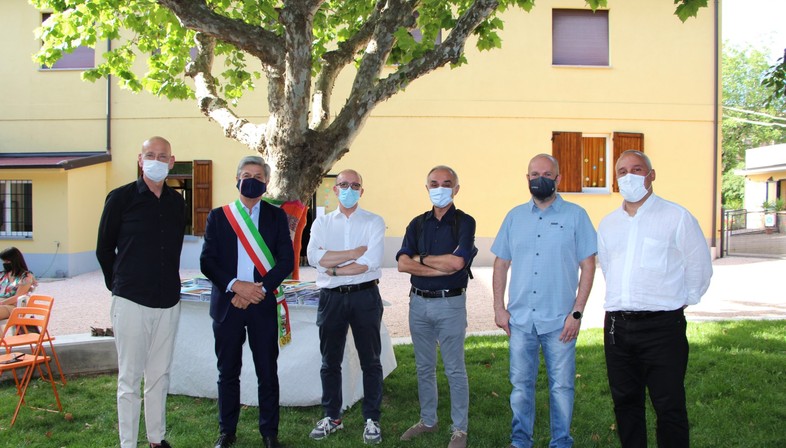 Creativity, sustainability and biodiversity: the essential elements characterising the project for the new garden of the Casa Coccapani nursery school in Fiorano Modenese (in the Emilia-Romagna region), inaugurated on June 22 and made possible by the programme promoted by the Fondazione Iris Ceramica Group, in collaboration with the Municipality of Fiorano Modenese. The project of ideas that creatively transformed the green space belonging to the Casa Coccapani nursery school into a “planetary garden” was conceived by architect Bruna Sigillo, winner of "Next Landmark 2020", the international contest promoted by the Fondazione Iris Ceramica Group and by the Floornature portal, dedicated to architecture, design and project culture.
The initiative is part of the activities carried out by the Fondazione Iris Ceramica Group to help support the culture and professional training of the new generations of architects and designers, as Stefano Luconi, Corporate Foundation and Social Responsibility Manager of the Iris Ceramica Group explained during the inauguration of the project.
The Next Landmark is, in fact, aimed at young architects and designers who graduated in the last decade. For the 2020 edition, competitors took up the challenge of an ideas competition entitled "An educational garden in Fiorano Modenese". The young architects were asked to develop a project that could help enhance the external areas of the Coccapani school, without involving substantial changes to the layout of the driveway spaces and preserving the existing trees dotting the large, green space. The intent was to complete the building restoration intervention involving the school structure, enhancing it with qualitative outdoor areas, such as an “educational garden” for the young students. The space would serve as the entrance and reception for the school’s children and parents, as well as offering an important space to carry out collective educational and training activities. “An open space in which the children of the nursery school could, as safely as possible, continue their growth path together and as part of a community”, as Stefano Luconi explained.
The jury of the competition – composed of Mario Cucinella (MCA ARCHITECTS / School of Sustainability), Massimo Imparato (SOS - School of Sustainability), Don Antonio Lumare parish priest of Fiorano Modenese (President of the Fondazione Coccapani), Francesco Tosi mayor of Fiorano Modenese, Federica Minozzi (Fondazione Iris Ceramica Group) and Paolo Schianchi (IUSVE teaching architect) – found in Bruna Sigillo’s project of ideas a perfect correlation to the proposed theme. Architect Bruna Sigillo, in fact, designed the “Planetary Garden” for the nursery school’s green spaces inspired by the principle of the “planetary garden” conceived by French biologist and landscape architect Gilles Clément. The simple and disruptive idea proposed by the architect is that of a garden which, in turn, becomes a “plant nursery” for the city. A nursery characterised by a human aspect, as a place of interaction, training and growth for its young citizens, as well as by a “plant” aspect, where the children can learn to discover, appreciate and protect diversity, starting with that of the plant ecosystem. A result achieved thanks to a minimal intervention consisting of a few and carefully studied elements that respect the existing structures and trees. This includes the addition of the scented shrubs and flowers to add a touch of colour and highlight the school’s entrance, as well as the changes to the area that serves to separate the school from the city. Finally, the project also saw to the creation of an outdoor classroom that uses the foliage of the trees as its roof and that can accommodate the many activities of the young students. The new open-air space was, indeed, successfully used during the inauguration to host the delightful theatrical performance that saw the involvement of the children, excited and happy to have a whole new garden at their disposal where they can grow and play. 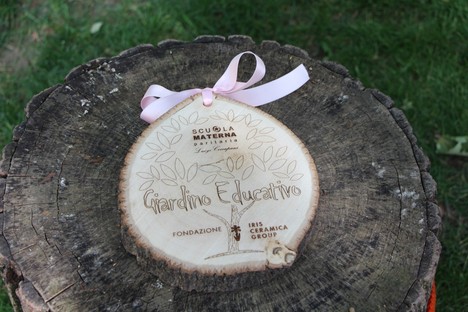 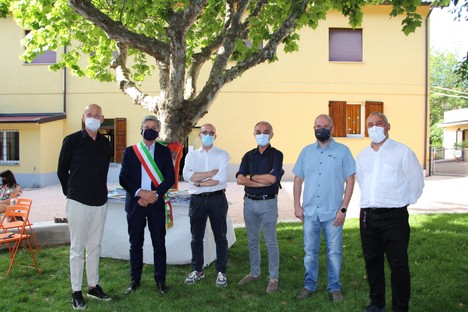 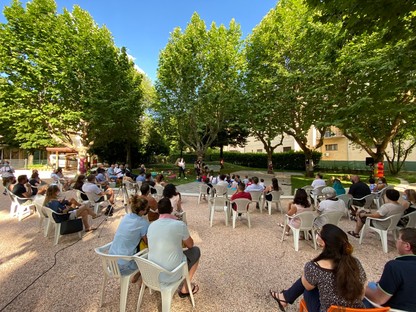 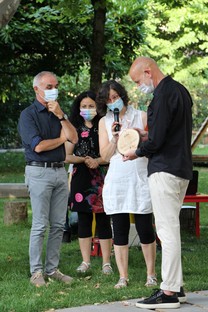 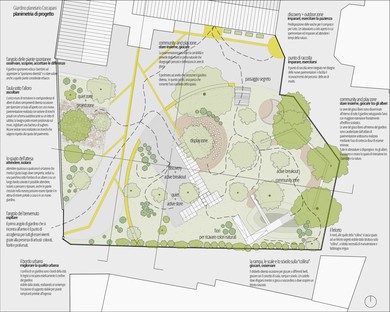 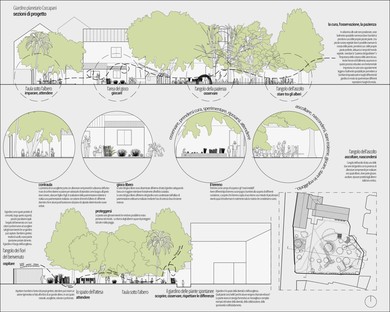