The construction of the Perennial Garden, a large 4,000-square metre garden began in May 2020. It was designed by Piet Oudolf, the famous Dutch landscape architect who created important public parks such as the New York High Line, the Hauser & Wirth Somerset gallery, the Serpentine Galleries and the Venice Biennale. The new garden will be built on the meadow that stretches between the VitraHaus designed by Herzog & de Meuron and the Vitra production centre designed by Álvaro Siza. 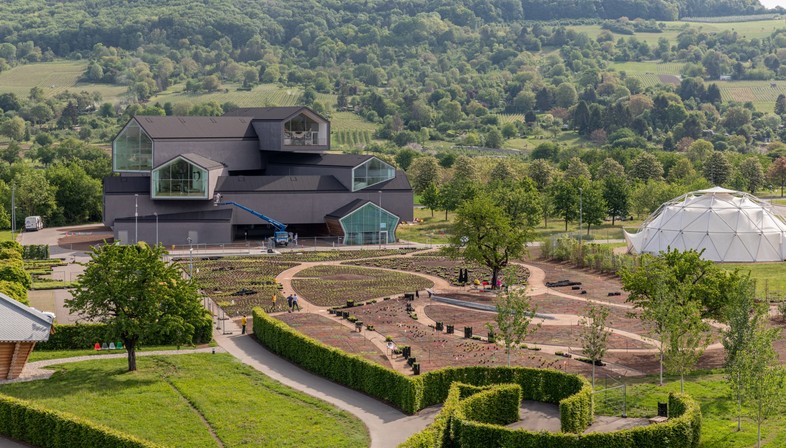 At the Vitra Campus in Weil am Rhein work was recently started on a new project: not a building but a "green architecture" covering a space of nearly 4,000 square metres. A green artistic composition that will gradually reveal itself, designed by the well-known Dutch landscape architect and designer Piet Oudolf.
Speaking of the new project, Rolf Fehlbaum,, Vitra's chairman emeritus, explained that “during the first decades of the Vitra Campus development we did not ask ourselves the question of landscape design. The first landscape interventions came with the launch of the projects by Alvaro Siza (Siza Promenade) and Günther Vogt, when the north and south areas of the Campus were connected. Piet Oudolf's garden gives it a new dimension and offers visitors a different experience; an experience that also changes continuously”.
Over time, the Perennial Garden will complement the different architectures designed by Tadao Ando, Frank Gehry, Nicholas Grimshaw, Zaha Hadid, Herzog & de Meuron, Carsten Höller, Renzo Piano, SANAA and Álvaro Siza, which all characterise the Vitra campus, without however being a mere decorative element. The goal, underlined by Piet Oudolf, is to integrate the architecture surrounding the garden and to give a new perspective to the buildings, as well as providing visitors with an evolving experience. As the architect stressed, his gardens offer a sensory experience not only in the spring, when the plants attain the period of most luxuriant growth, but throughout the year. A result obtained through meticulous research and a balanced composition of the “community” of plants, taking into account the different flowering periods and the life cycle of each plant species introduced. 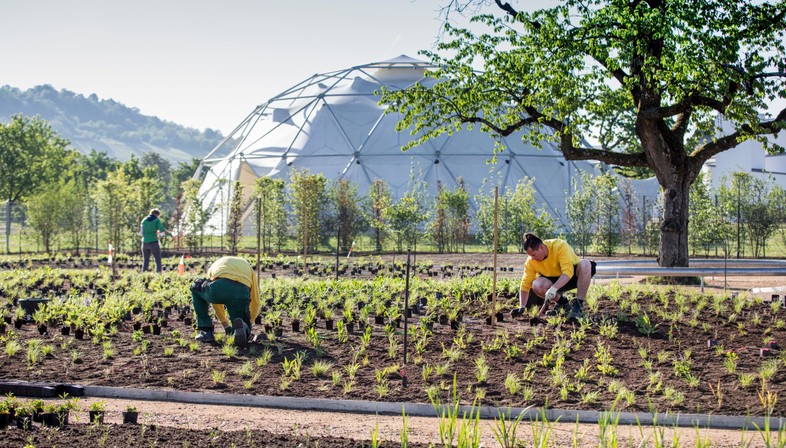 The new garden was built on the meadow stretching between the VitraHaus designed by Herzog & de Meuron and the Vitra production centre designed by Álvaro Siza. About 30,000 plants were planted to create the garden, organised according to a pattern that is only “wild or natural” in appearance, but that was designed and meticulously controlled by Piet Oudolf. The Dutch landscape architect was the precursor of new theories on landscape architecture, focused on overcoming the traditional green architecture seen as too ornamental and expensive in terms of work and resources. Instead, his approach focuses on using multi-year, self-renewing plants, perennial shrubs, herbaceous plants and wild flowers. “Let others say what I am. For some, I'm just a gardener” said Piet Oudolf of himself. A gardener, nevertheless, who is the designer behind some of the most important public parks in the world, such as the Hauser & Writh Somerset gallery, the Serpentine Galleries in London and the Venice Biennale, where in 2010 he created the “Garden of Virgins”, a flower garden at the former monastery of Santa Maria Vergine. Piet Oudolf also designed the High Line, a public park in New York City built on the last disused piece of what was once the elevated railway, demolished in 1960. An important project with which the landscape architect generated a new debate over gardens located inside cities. Just as in the High Line, which provides passersby with countless opportunities to stop, look and discover, in the Vitra Campus Perennial Garden Piet Oudolf catches visitors’ attention, drawing it away from the buildings and down to the ground, encouraging them to stroll through the plants and lose themselves in the garden, for an emotional and aesthetic experience. 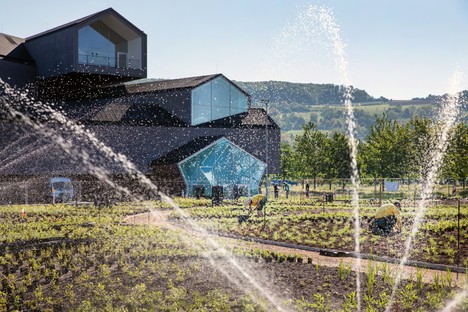 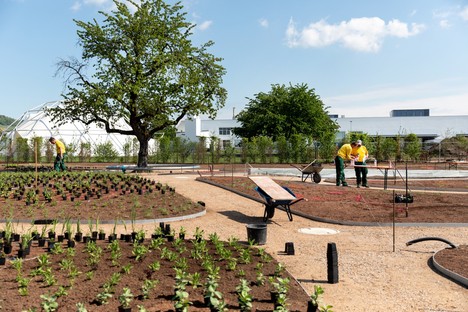 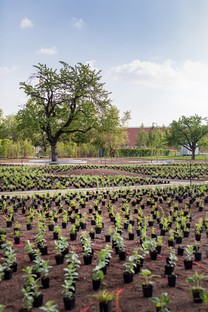 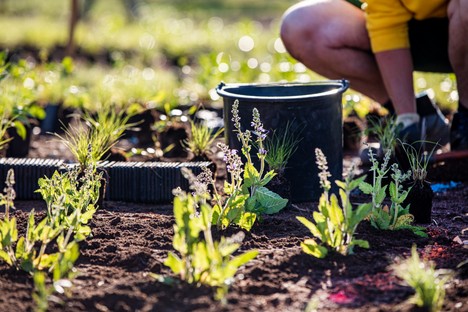 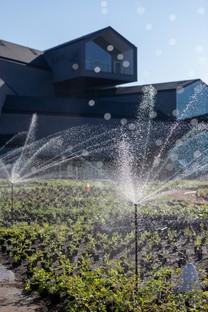 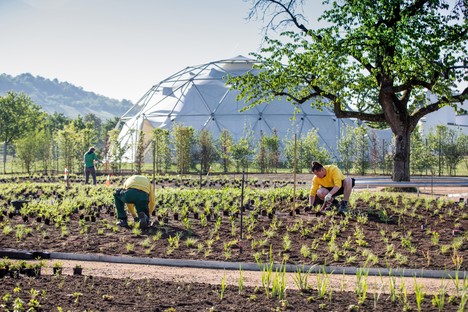 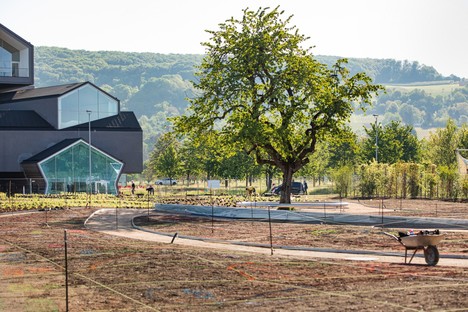 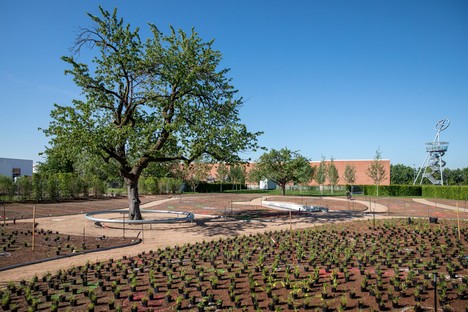 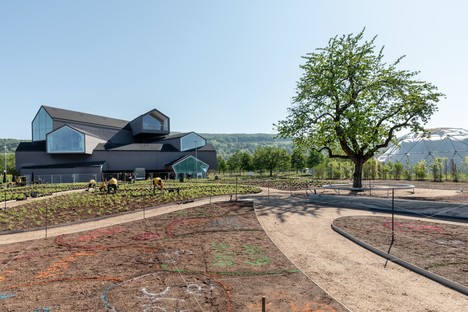 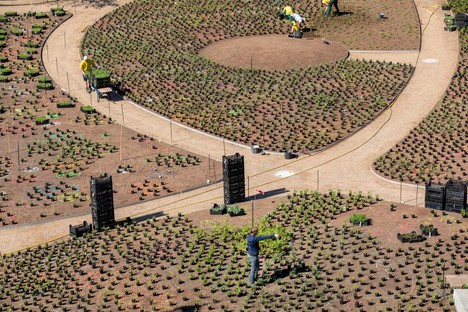 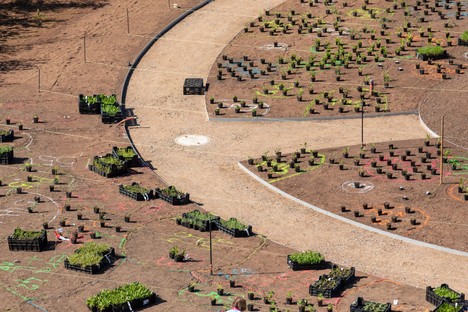