Roskilde Festival Folk High School, designed by MVRDV and COBE, was recently completed in Denmark. The school and student housing block complete the masterplan for the area including Ragnarock Museum, which opened in 2016. 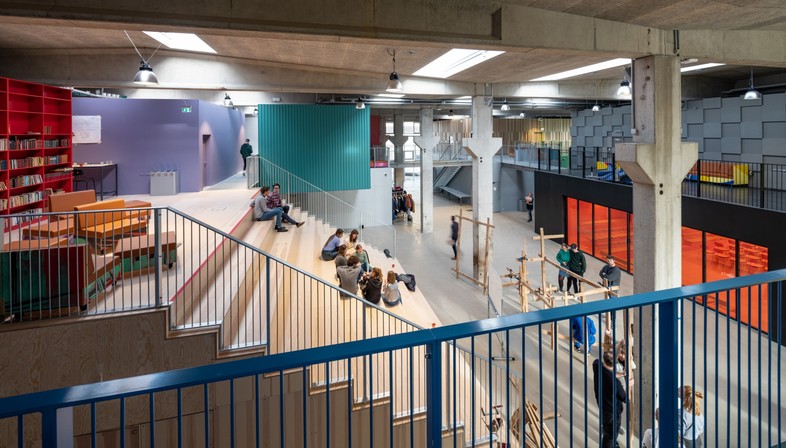 The long partnership between architectural studios MVRDV and COBE produced the recently completed student housing and Roskilde Festival Folk High School building, the final act in the ROCKmagneten masterplan. The two studios began working together in 2011, when they won a design competition for conversion of an old concrete factory in Roskilde, a Danish town near Copenhagen famous for its music festival. The former industrial site has been transformed into a contemporary centre for music. The first project in the series was in fact construction of the famous Ragnarock inaugurated in 2016. As the name suggests, Ragnarock is a museum about rock and pop music and youth music culture in general.
The music festival is a totalising event for the town, attracting enough people to make Roskilde Denmark’s fourth-largest city in terms of population density for the duration of the eight-day festival in the month of June. It was only natural that the design of school should be intimately linked with the famous Roskilde Music Festival and the concept of "life-long learning" characteristic of the Danish educational system based on the ideas of 19th-century Danish intellectual N.F.S. Grundtvig.
The school offers programmes in music, media, leadership, politics, art, architecture and design on the basis of a formula in which students and teachers live together for full immersion education. 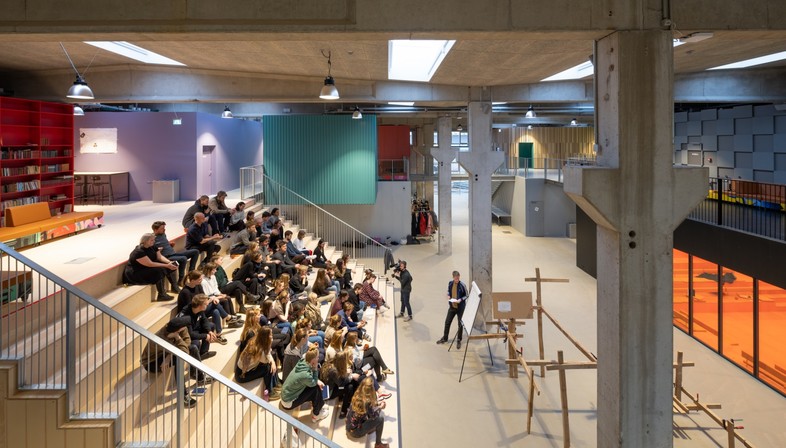 The school is housed in a former concrete factory, preserving the existing structural elements, including the pillars and beams and the roof, while radically altering the building’s interiors and façades.
The project is completed by two new student housing blocks, staff housing and a row of adaptable structures for innovative start-ups linked with music and facilities supporting Ragnarock Museum. These buildings pick up on the simple, evocative character of the area’s industrial past; the modular blocks containing the housing units, for instance, have wooden frames covered with metal panels like shipping containers. 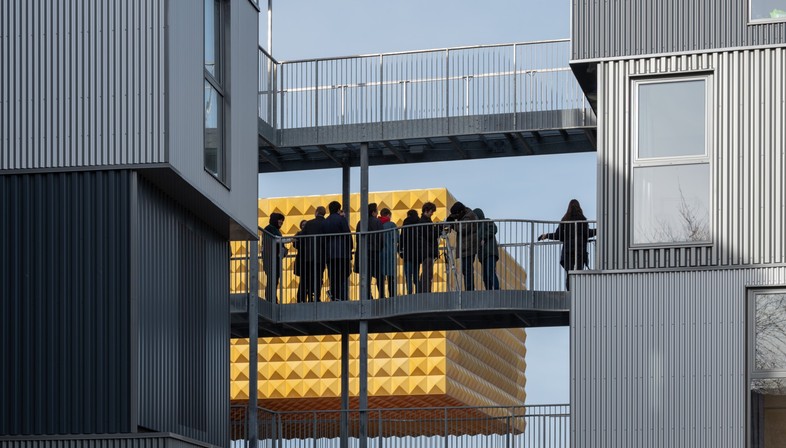 The architects express the key concepts behind the music festival - music, art, activism, fun, and above all freedom – in the design of the school, which is based on the concept of “a box within a box”. Functions are distributed in colourful modules contained within the wrapper of the former factory, arranged along a central spine which crosses the building from one side to the other. Along the spine is a wooden tribune which acts as the communal heart of the school, housing a variety of functions in different “boxes”: an auditorium, a recording studio, workshops and classrooms for dance, art and architecture. The educational facilities are divided into three areas: one for pursuits of the mind (writing, debate, leadership), another for activities involving use of the body (dance and music), and a third for the visual arts (art and architecture). 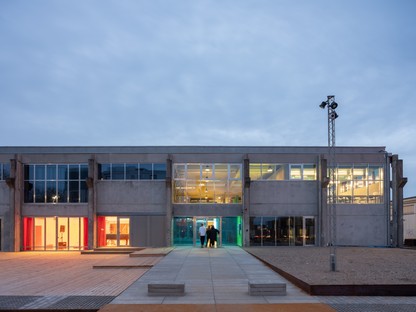 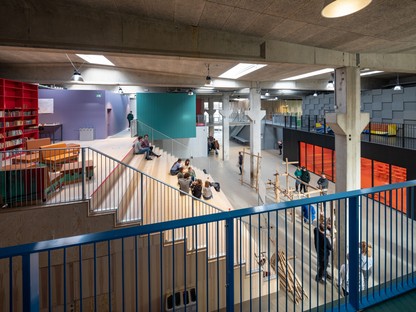 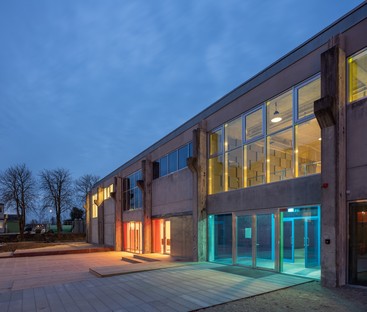 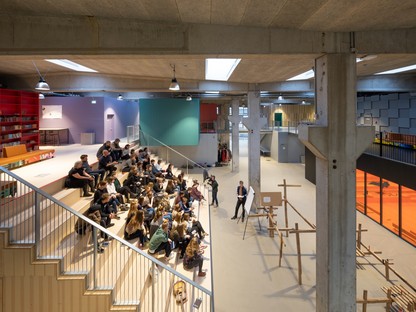 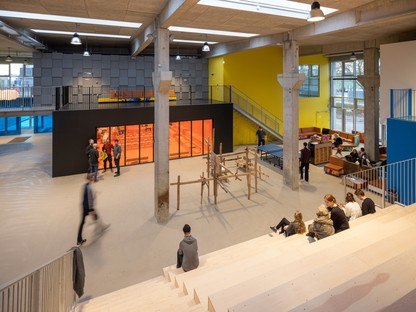 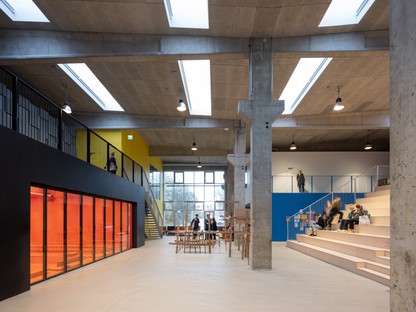 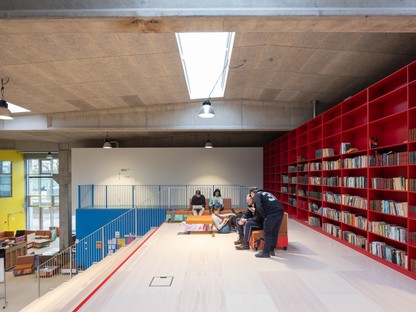 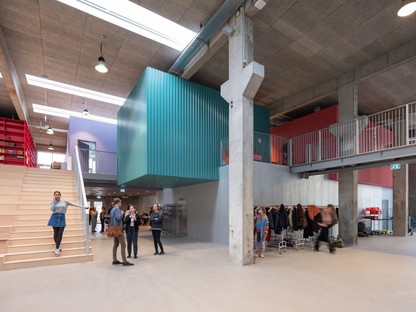 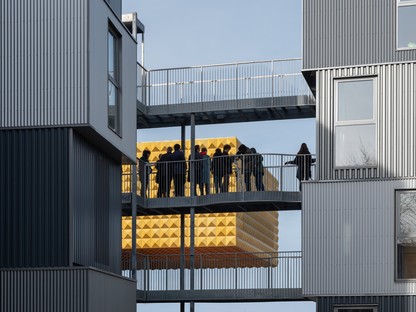 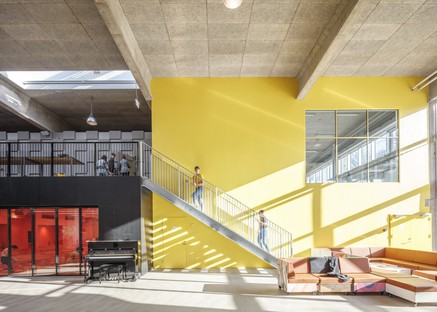 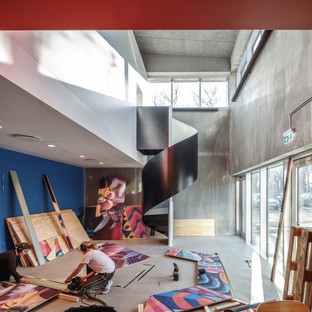 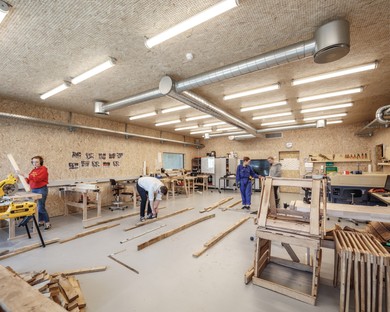 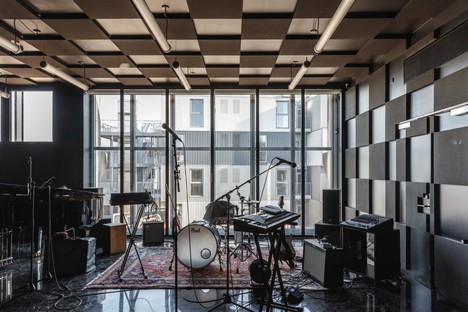 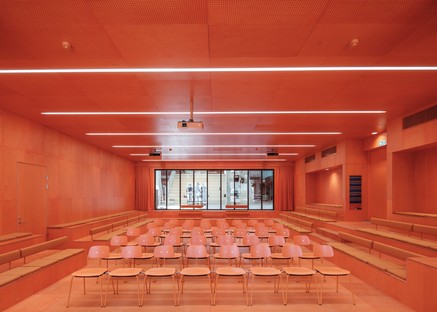