In Barceloneta, the old residents are the true records of the area’s history, including its local landmarks. One of the legendary examples that they might point out - a place largely unknown to tourists - is the Cheriff restaurant, which has been serving up fresh fish and seafood from the nearby docks every day since 1959. This local institution commissioned the Mesura architecture firm, also from Barcelona, to oversee the restaurant’s restoration, ensuring that it stayed in line with what has been Cheriff’s unmistakable style for the past sixty years whilst also updating it for the 21st century. 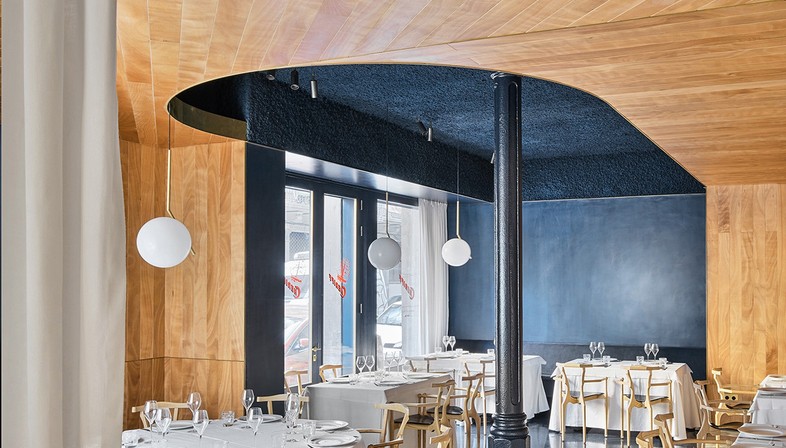 Barceloneta Beach is one of the most famous tourist destinations in Europe. Every day, it is flooded with thousands of people, and the incredible turnover of new bars and restaurants opening there make it very difficult for visitors to find their bearings amidst the many offerings of the neighbourhood. However, those who truly know Barceloneta intimately - that is, those who have been living in this special area for decades - are capable of pointing out its historic spots, those which have had their roots in the neighbourhood since time immemorial, the ones that bring joy to all thanks to their delicious traditional fare and cosy atmosphere redolent of yesteryear.

One of these legendary eateries is the Cheriff on Carrer Ginebra, which opened its doors in 1959. Famous for its seafood, paella and freshly-caught fish sourced every morning directly from the fishermen’s boats docked just a stone’s throw away, the Cheriff is also renowned for its dining rooms which evoke the Barcelona of old, a city now lost to the hustle and bustle of a globalised world and the incessant growth of a fluid contemporaneity.

To mark its sixtieth birthday, the Cheriff decided it was time for a makeover, bringing its aesthetic up to date whilst ensuring that the singular identity it has created for itself over the years remains intact. A delicate job, to be sure, which led the restaurant to call upon the locals at Mesura, a Catalan architecture firm specialised in creating unique and elegant spaces.

Cheriff is part of Barceloneta’s historical memory. The architects at Mesura, whose designs are always characterised by the strong theoretical underpinnings of in-depth research, immediately understood that the aim was to create a timeless style to make the past shine once again with a contemporary light. The architects themselves paraphrasing Massimo Vigorelli, saying: “timelessness is created when things are easily understood”. Vigorelli spoke of “intellectual elegance”, as simplicity is by no means “simple”, but rather the result of a long process of experimentation, revaluation and refining”. This sentence encapsulates the approach to design taken by Mesura, whose architects spent a long time testing various ways of dividing up the new Cheriff into plans and sections.

The existing layout of the restaurant, which is divided into several compact areas, an echo of the neighbourhood fishmongers’, was maintained so as to empathise with the local community. The venue’s signature materials, namely wood and brass, were recycled and used in coverings and furnishings for some areas of the restaurant, maintaining the marine, seafaring feel of the place. Mesura then suggested an important addition: a colour, navy blue, so as to provide a colour contrast whilst keeping with the maritime theme. This shade is found in various materials and textures throughout Cheriff, acting as a sort of fil rouge (or rather, fil bleu) to provide a sense of consistency to the various areas of the restaurant, separated by clear lines thanks to the use of different coverings.

According to Mesura, a fundamental part of preserving Cheriff’s authentic, timeless atmosphere involved including craftwork at both the design and practical levels. The architects believe that the use of craftsmanship makes the design more human: “artisanry adds subtlety, strength, and value. It’s closely connected to identity and authenticity, as its origins are traceable to collective creativity. ‘The arts of the people’ evoke notions of uniqueness, honesty and attention to detail. Being authentic is about being sincere and responsible. Craftsmanship draws on knowledge, skill and history, hence its connection to quality.”

As such, Mesura decided that the flooring should be handcrafted. To create the distinctive pattern used for the floors, as well as obtain a variegated colour effect in the joints to complement the navy blue, an unusual technique known as ‘terrazzo’ was used. A blend of chips of marble, quartz, granite and glass was poured on-site with a cement- and polymer-based binder, in combination with white marble tiles, pairing well with the white tablecloths and curtains and creating an intimate atmosphere.

Mesura’s work on Cheriff is now complete, and the restaurant’s look has seen a complete overhaul: from a popular tavern offering typical cuisine, it is now a contemporary, refined and elegant restaurant which has retained its main attraction, namely the authentic flavour of old Barcelona. What has truly never changed in Cheriff’s sixty-year history is their delicious paella and seafood offerings. 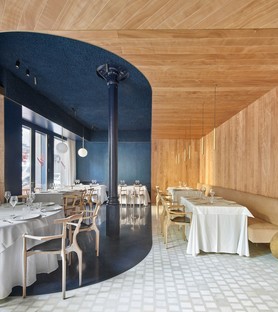 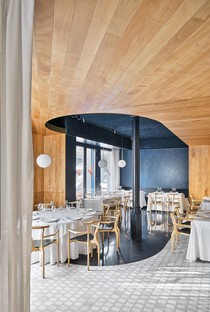 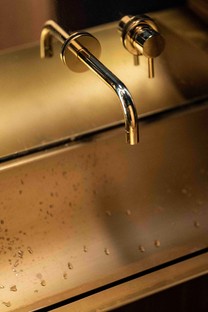 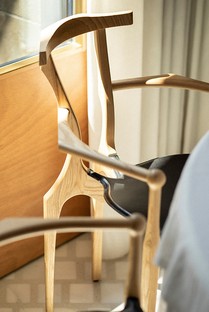 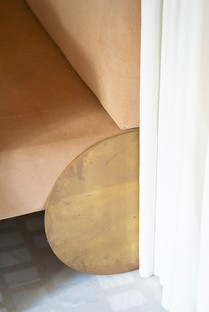 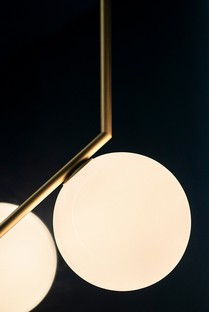 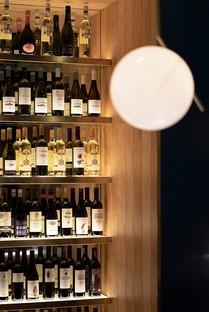 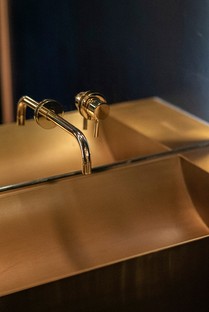 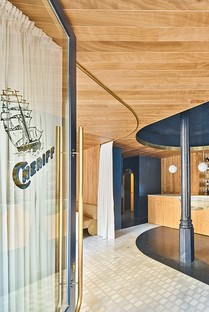 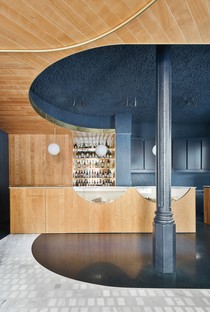 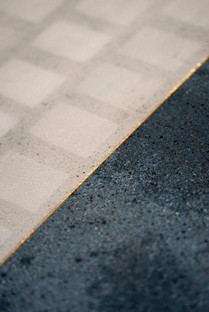 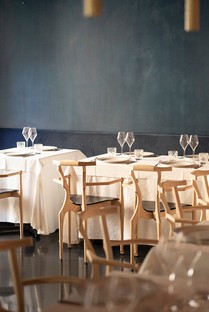 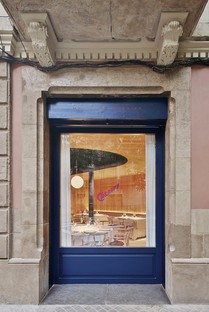 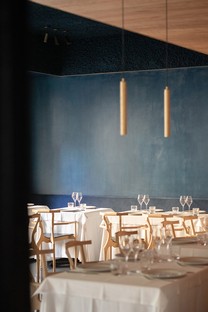 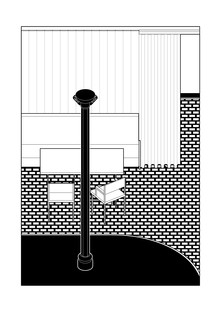 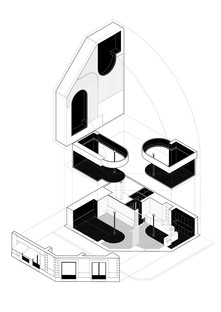 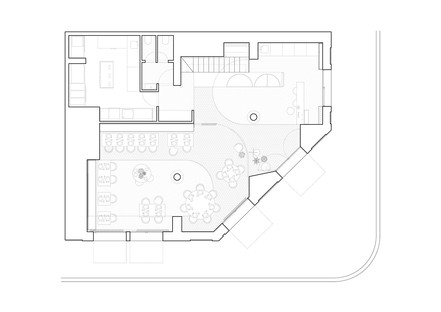 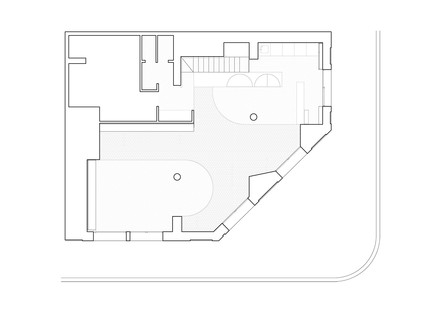 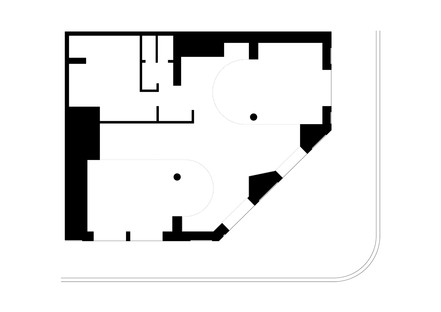 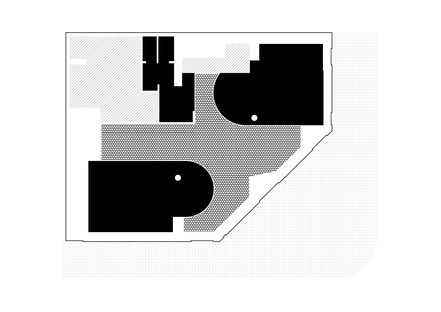 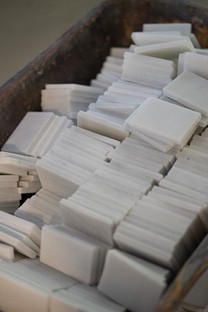 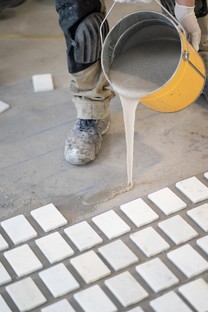 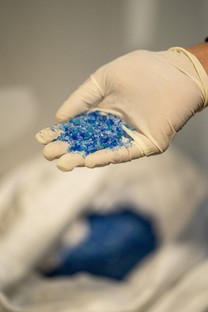 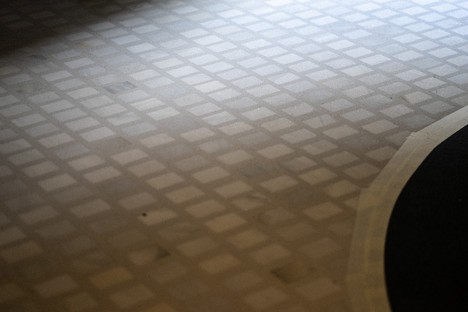 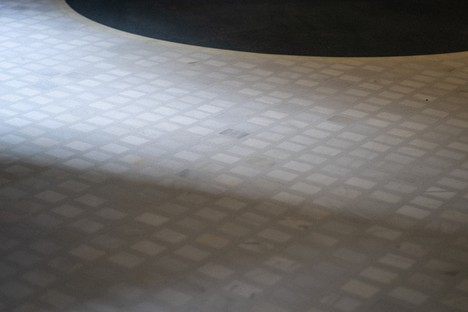