Enrique Espinosa and Lys Villalba are working together on a house inspired by the theme of migration between city and country in Spain. In Cercedilla, a small town near Madrid, the architects have made a home built in the 1970s into a manifesto of contemporary living. 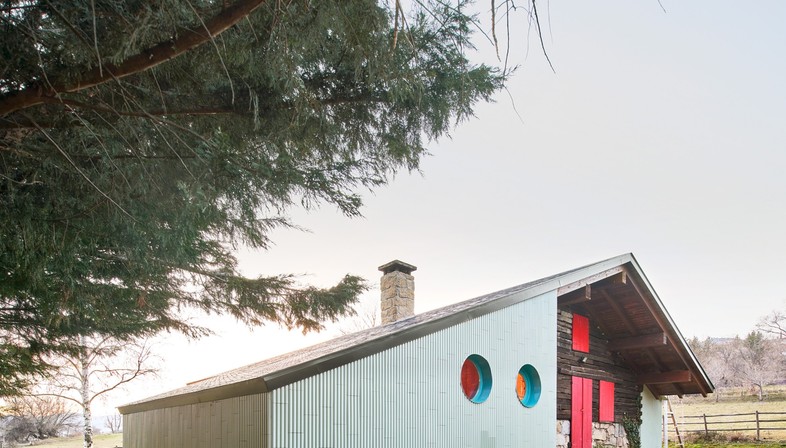 Starting out with the theme of contrast as a linguistic pretext, Enrique Espinosa and Lys Villalba work together once again on an “old-young” home for “rural-urban” living in Cercedilla, once again distinguishing their design process through use of colour.
We were particularly curious about their work on Educan school in Breunete, which transformed an obedience school for dogs into a form of multispecies architecture that can be inhabited by a variety of different local animal species. Construction of a habitat for fruitful coexistence of different worlds, and the concept of hybridisation of reality to promote a new way of coexisting in nature, has a lot in common with the theme of the house for “rur-urban” living in Cercedilla.
In this home in the mountainous area of the Cuenca of the Guadarrama River, the concept of boundary space is addressed on three levels: the first has to do with the theme of country-city migration, from an urban lifestyle to one more in contact with nature; while the second reflects on the construction schedule, imagining that the project has been dilated into multiple phases, in which the building is not something stable but is constantly changing; and the final level is reclamation and transformation of matter, as the way of using materials evolves.
The architects report that Cercedilla, a touristy village north of Madrid, has in recent decades been affected by various forms of migration between the country and the city. But today we speak rather of a constant state of migration, in permanent transit, in which people have gone back to living amid nature without embracing the type of work normally associated with the country, maintaining strong ties with the urban lifestyle and continuing to work in the city, travelling there when necessary. These are people who are attracted to do this by the rural landscape, but do not intend to go back to making a living from the soil. “Ana and Manolo’s field at The Young Old House is pasture for a local farmer’s cows. Luis’s livestock tends to this area of the mountains in exchange for fresh grass. The coexistence of traditional rural communities and new ‘rur-urban’ inhabitants make it possible to build new ecologies, crucial in order to care for and maintain the balance of a changing territory”, say the architects of the project.
So what should a home for a rural-urban lifestyle be like? This is the question Espinosa and Villalba asked in order to respond to the request of a family with 4 children. First of all, their approach was not to demolish and then rebuild, but to regenerate existing constructions on the foundations of this new way of living outside the box. The project is based on the principle of expansions preserving the building’s original structure, increasing it where necessary to respond to changes in the family’s way of life. 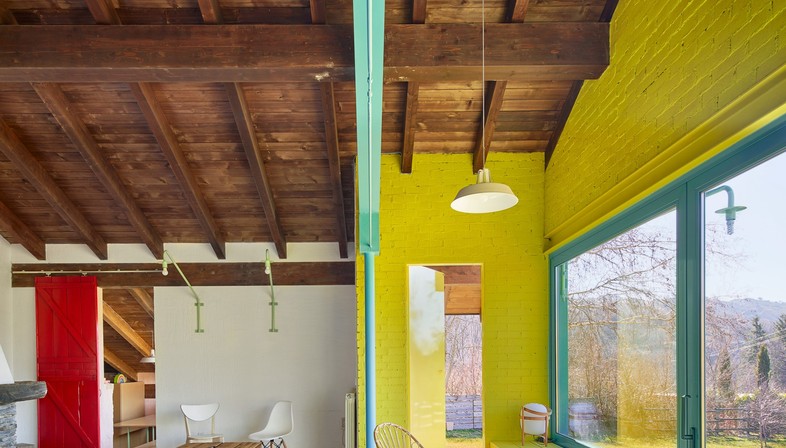 The house had been built as a rustic holiday home in the 1970s. With a square floor plan and a big roof with two gables extending into an arcade to the east, it had no insulation at all, and failed entirely to establish a relationship with the landscape. The interiors contained a large living area with sofa-beds and a single master bedroom with bathroom.
In the first phase of the project, the only one visible at the moment, the architects built a three-volume extension within the roof perimeter, using a corrugated ceramic covering to distinguish the new parts. The outdoor areas under the eaves, including the arcade, have been closed off to become a part of the interiors, expanding the living space while opening up new panoramic views of the landscape. Portions of the stone walls have been cut and replaced with pitched metal beams and tie rods, opening up the entire living area towards the natural landscape. The roof has been changed, and the materials reclaimed in the process have been used to make the furnishings in the home.
The living room breaks down the southern wall to create a dining area with a big table and a sunny window facing the greenery; the master bedroom is now followed by the children’s room, located where the garage and wood stack used to be, while a utility room has been added next to the bathroom on the western side.
In the next phase, the walls of wood and stone will be partially demolished on all sides to add insulation and then reconstructed using the same reclaimed materials, but on the basis of a different scheme which uses colour and combinations of materials to help reconstruct the evolution of the home’s history.
Reclaimed materials from the emptying-out of the walls and roof will be reused to make furniture and finishings, starting with simple, pared-down components: new doors will be made from the red window shutters, while the slate from the old roof will become cladding for the new walls. Above the older layer we can already see the results of the recent work, primarily employing unusual ceramic surfaces and metal objects in bright colours underlining the difference. 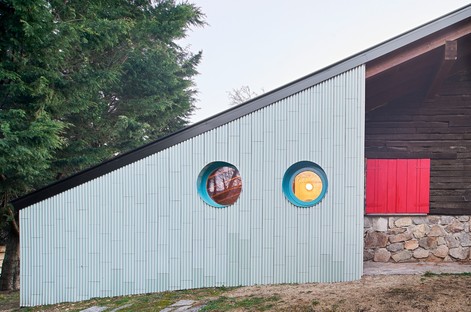 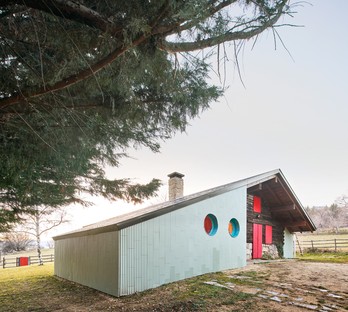 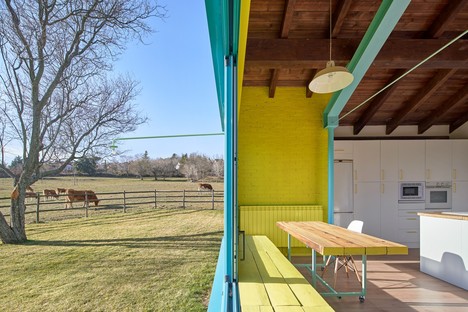 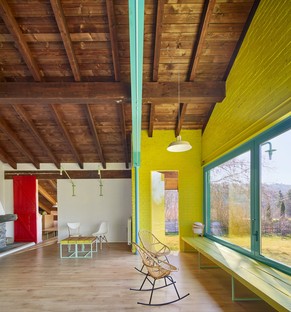 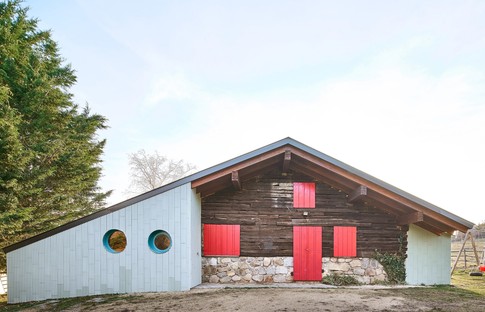 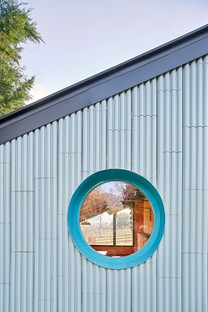 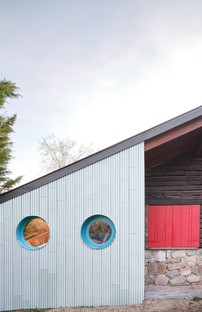 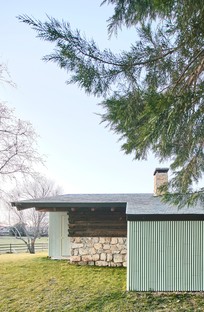 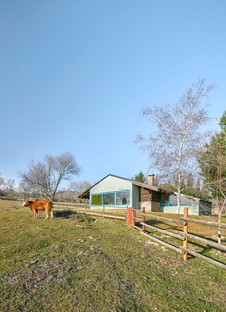 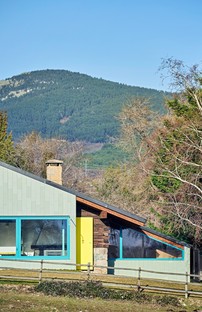 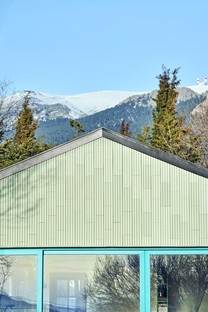 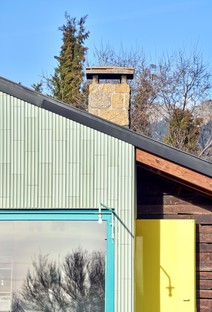 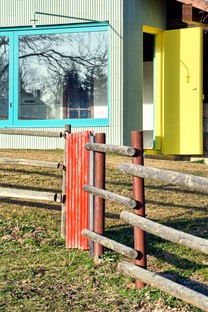 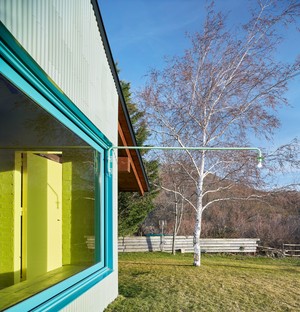 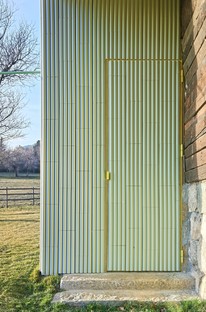 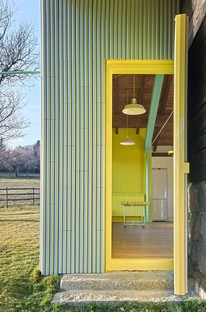 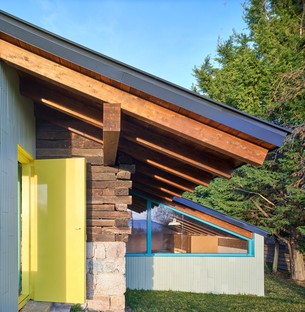 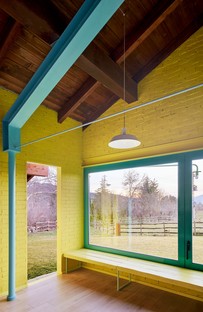 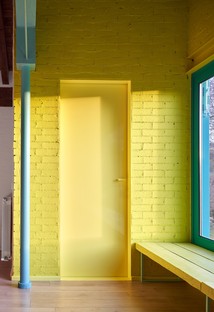 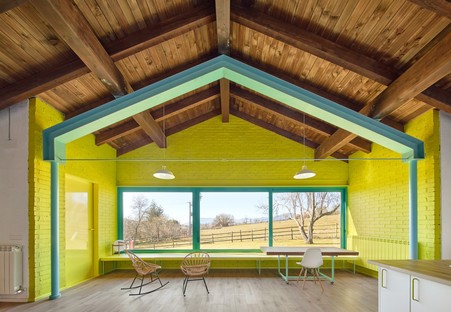 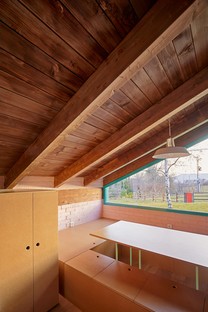 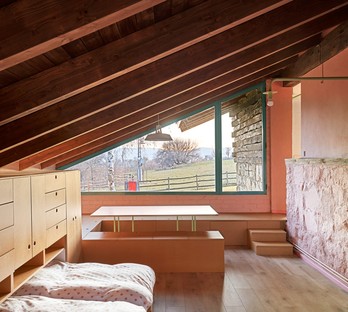 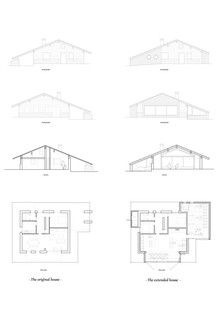 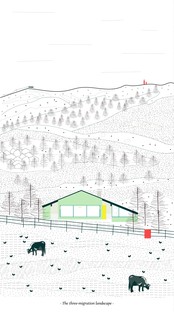