Utopia, the Library and Academy of Performing Arts completed recently by KAAN Architecten, redesigns parts of the historic town centre of Aalst, underlining its urban context and incorporating a late nineteenth-century historic building into the new complex. 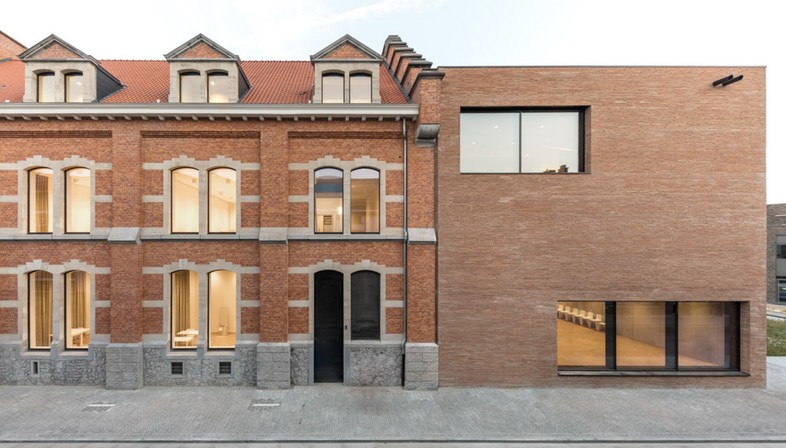 The new Library and Academy for Performing Arts completed recently by KAAN Architecten in the Flemish town of Aalst is named after Thomas More’s “Utopia”, which was first printed by a citizen of Aalst, Dirk Martens. 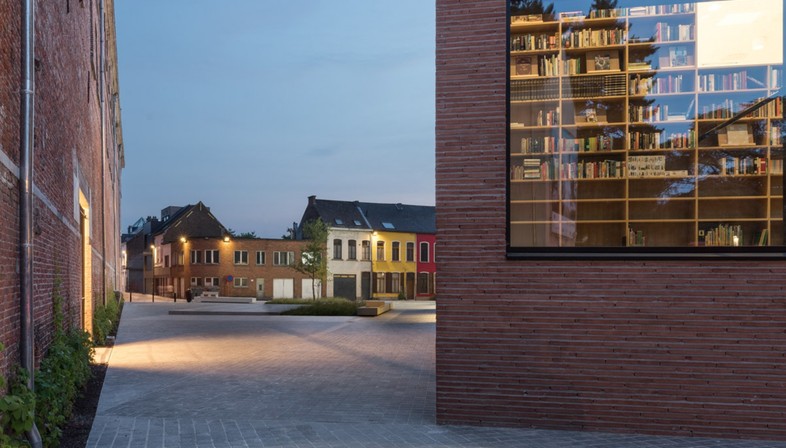 The new “Utopia” Library and Academy for Performing Arts designed by KAAN Architecten perfectly incarnates the hidden meaning of the title of Thomas More’s book, linked with the word’s Greek etymology. What the visitor sees is an “excellent place” but also an unusual place that gives rise to a sensation of alienation, a building containing another building. The project fits into the urban fabric of Aalst, on the irregular streets of the city centre. Interacting with this urban context, it becomes a new landmark englobing a historic building.
The 1880 Pupillenschool was where children of soldiers were educated for a life of military service. The historic building becomes a part of KAAN Architecten’s project, providing the solution on the corner of the new Library / Academy. The architects integrate the façade of the historic construction on both the outside and inside of the new building. Inside, the new floor slabs and grey concrete staircases dialogue with the brick elements of the historic façade, picking up on the colour contrast between the brick and light grey stone of the base and the other elements on the façade of the historic building. 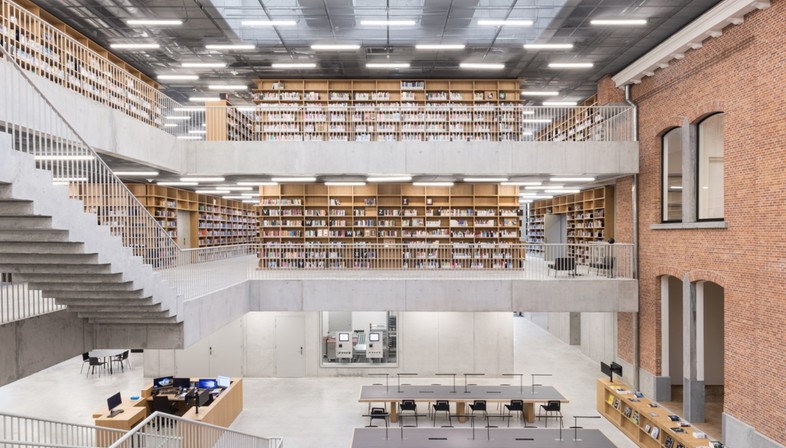 The architects created an uninterrupted visual connection between the city and the new building through big, tall slices in the brickwork. The windows cut the brick volume at several points, revealing both the books and the dance and rehearsal rooms. The place of honour is occupied by a big bookshelf 11.50 m tall, visible from the road through the big square window, containing all the books donated by the citizens of Aalst. The main entrance leads to a big foyer, where visitors are enthralled by the height of the structure, a bright, airy space where bookshelves and reading tables on several levels may be glimpsed, facing onto the foyer and the historic building’s brick façade. The open flights of stairs give the space a grandiose feel and offer a unique experience of dynamic perception of space. The image the atrium conveys to visitors is that of reinforced concrete floors floating in space and supported directly by the books. The bookshelves are constructed on concrete structural elements, hiding them and leaving only the jutting floor slabs visible. On the outside, the roof of the new building is hidden, while on the inside, metallic mesh attenuates the sunlight coming in from the big skylights and, balancing it with artificial light, creates a peaceful atmosphere throughout the day. 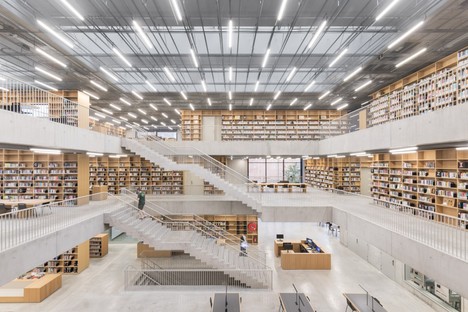 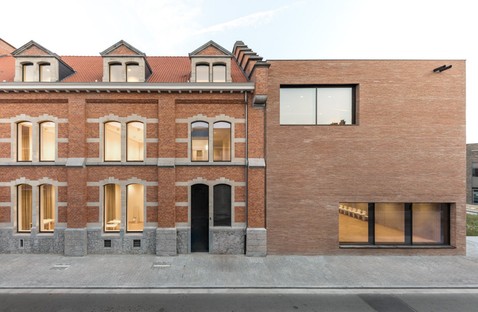 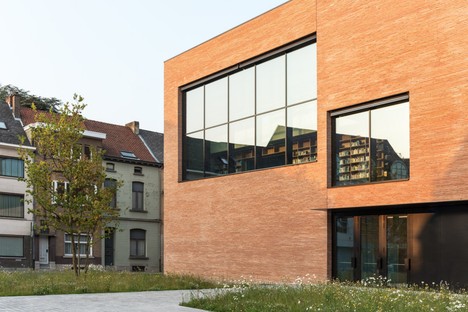 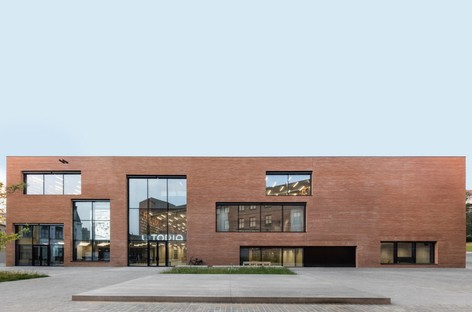 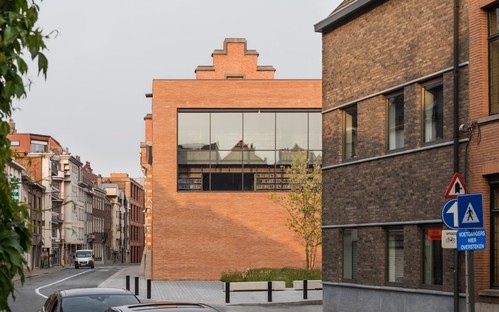 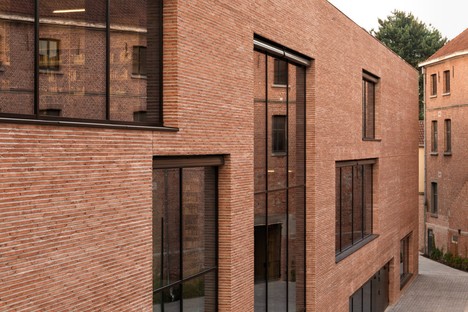 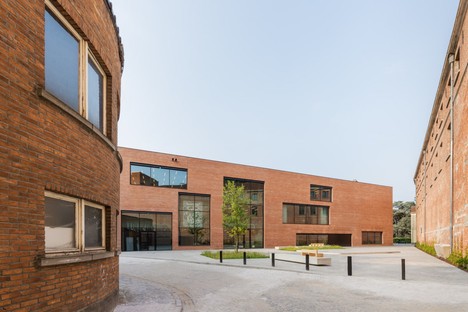 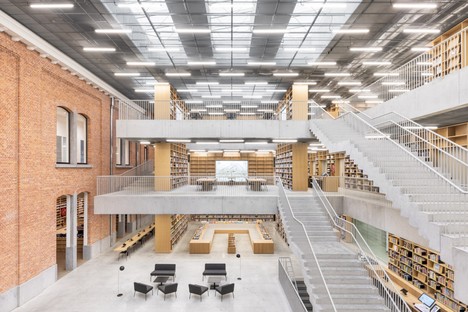 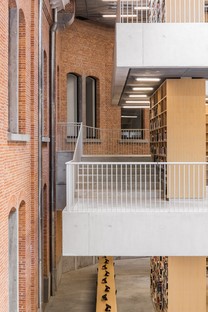 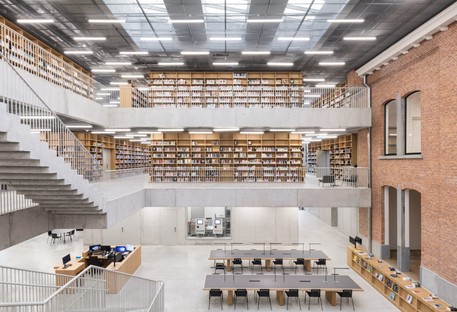 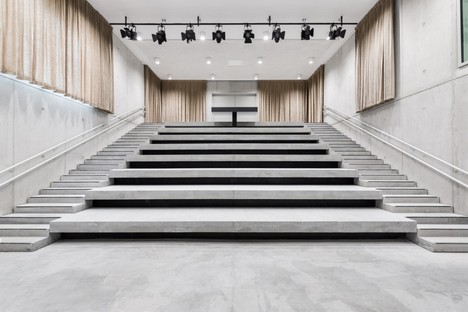 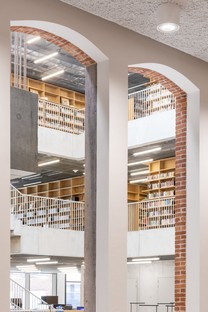 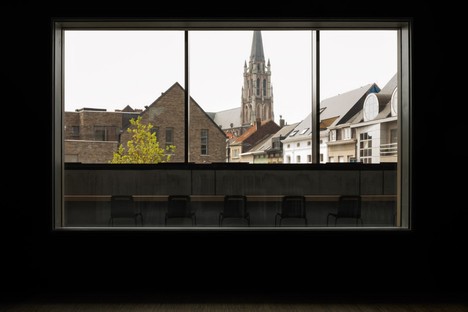 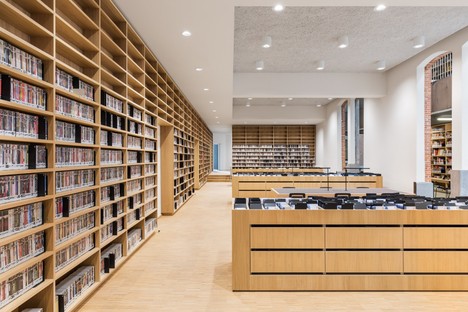 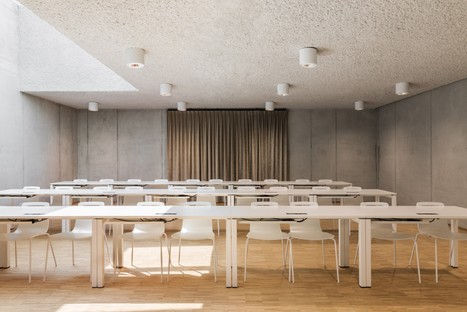 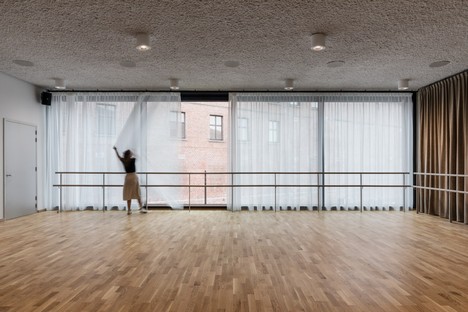 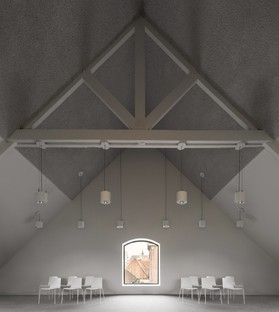 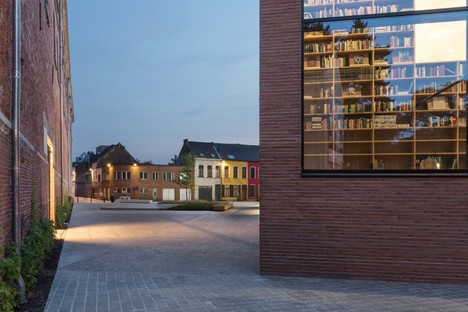 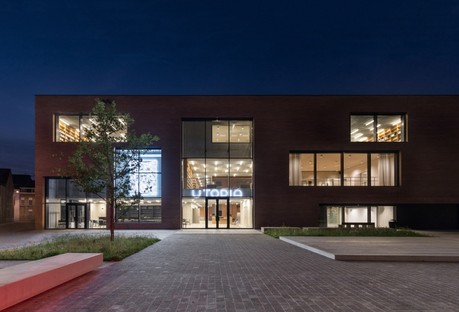