On the campus of the Eberhard Karls University in Tübingen, Kaan Architecten designed the new GUZ geo-environmental centre, a state-of-the-art facility for interdisciplinary research on environmental issues. This is the first work that the studio, founded and led by Kees Kaan, Vincent Panhuysen and Dikkie Scipio, has undertaken in Germany. 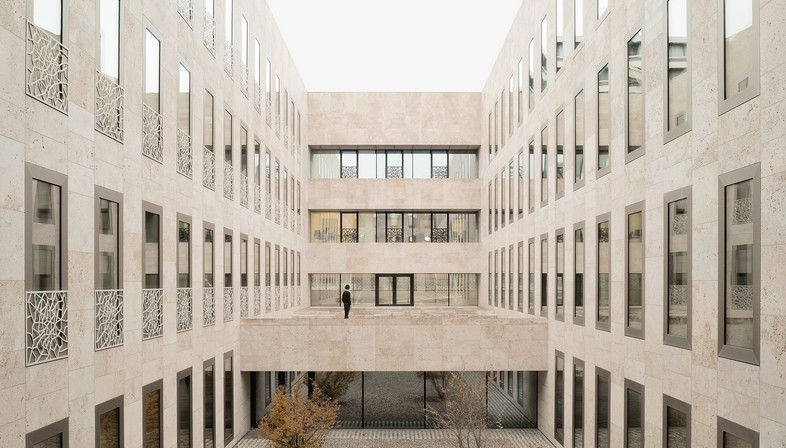 A new project has been added to the list of buildings for science and knowledge designed by KAAN Architecten, namely GUZ, the geo-environmental centre of the Eberhard Karls University in Tübingen, and the first project completed in Germany by the studio, founded and led by architects Kees Kaan, Vincent Panhuysen and Dikkie Scipio. GUZ is a state-of-the-art facility for interdisciplinary research into environmental issues, particularly water, soil and atmosphere-oriented research. The KAAN studio was commissioned for the project, which won the international competition launched in 2013. The finished project complements the Morgenstelle campus of the Eberhard Karls University of Tübingen, taking advantage of its unique hilltop location with a view of the valley and the city.
The campus was built in the 1960s and an extension project by Harris + Kurrle Architekten is currently underway. The new master plan includes the construction of four new buildings around a central square. This also includes the new geo-environmental centre designed by KAAN which has made it possible to bring together in a single location the science departments that were previously divided between different faculties.
The building is located in the northern part of the site, in an ideal position. Taking advantage of the orography of the area, the architects decided to construct a building partially embedded in the natural slope. The building is six storeys high, and planimetrically the spaces are distributed around two internal courtyards set at different heights to follow the natural gradient of the hillside.
The main entrance is located on the north façade and looks towards the campus square. The south side, on the other hand, opens towards the city. Inside, the centre combines different types of spaces, from public spaces for teaching to specialised activities. The common areas, such as the auditorium and classrooms, are accessible from the north side through a large double-height entrance hall, which is clearly visible from the campus square. The foyer is a place for meeting and interaction, housing study areas for students and, via the elegant, sculptural freestanding staircase, access to the galleries on the upper levels. Following a flexible layout and with a view to further development, the architects arranged workshops and laboratories on the east side of the building in two compact blocks, while to the south and west are the offices and meeting rooms, connected by internal corridors running along the façades and surrounding the two internal patios. From the outside, and seen from a distance, the building seems to evoke a block of stone with deep fissures revealing a precious glass interior. The wide bands horizontally lining the façade are inspired by the character of the other buildings on the campus, and they become more apparent as one approaches the building. The façades of the inner courtyards, on the other hand, punctuated by neat rows of windows, are reminiscent of the historic city centre where the previous offices were located, recreating a familiar atmosphere for users that balances the view of the natural landscape outside. 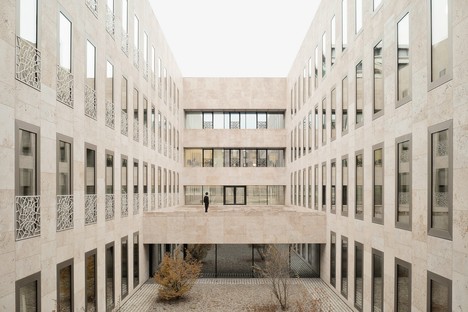 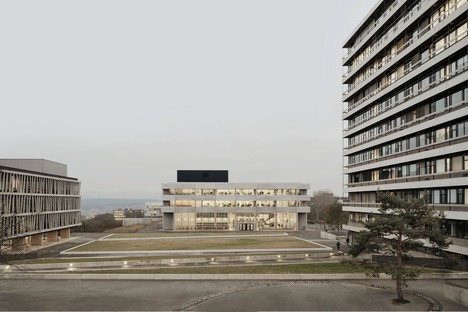 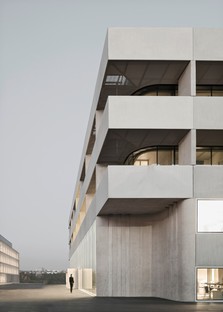 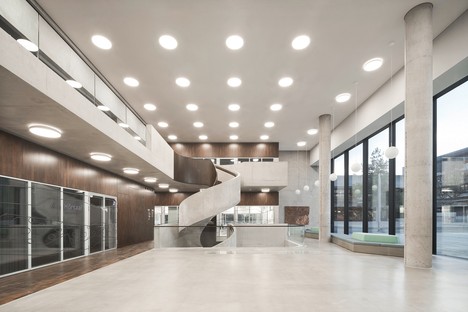 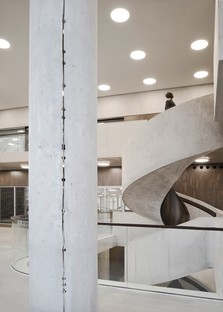 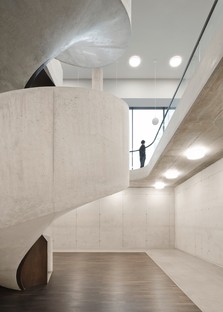 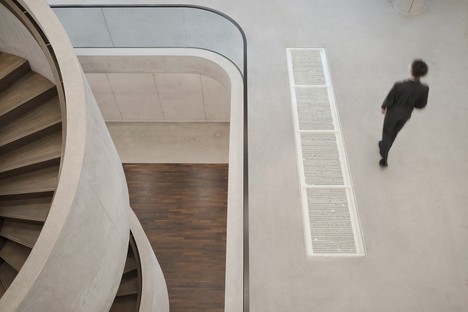 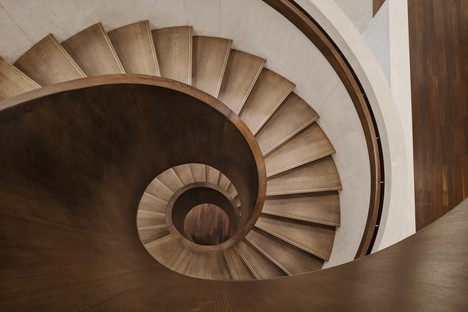 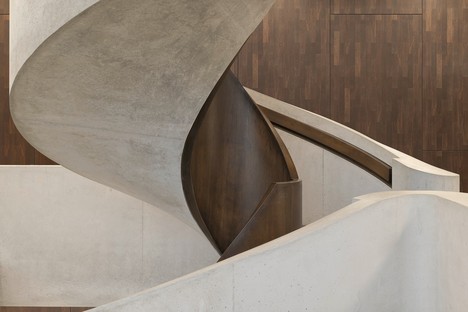 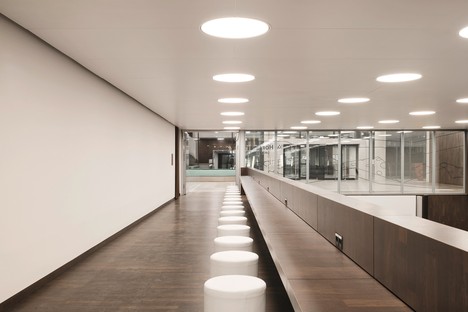 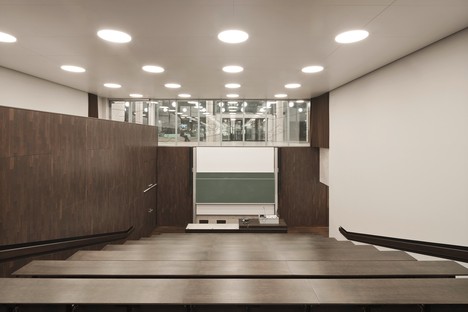 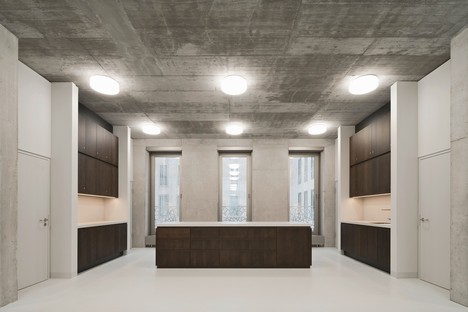 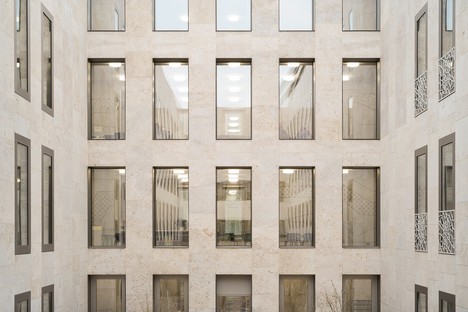 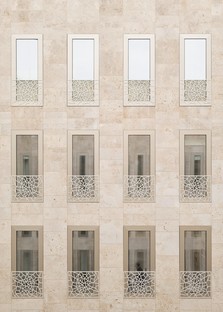 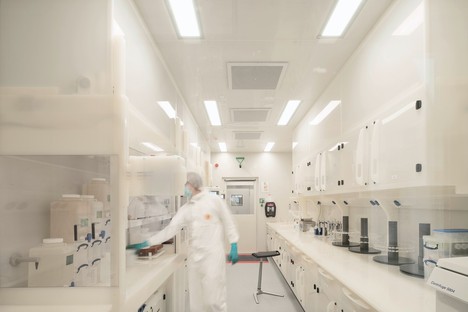 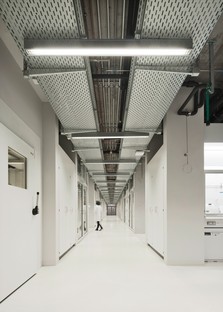 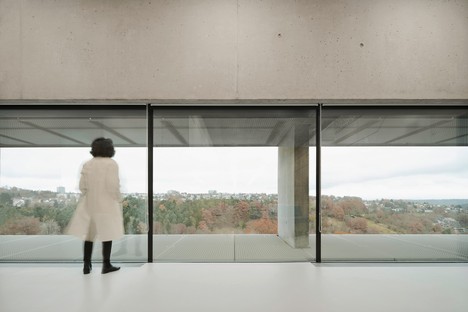 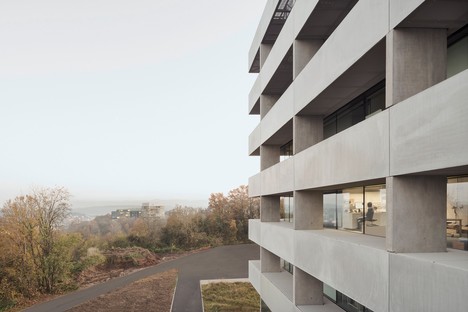 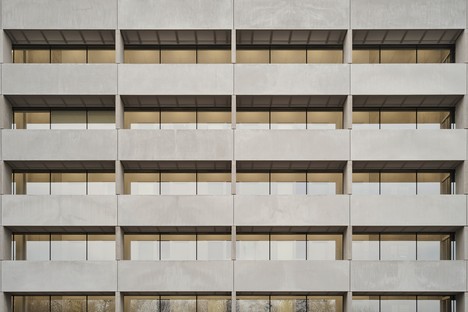 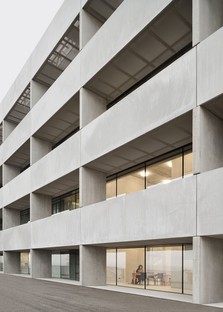 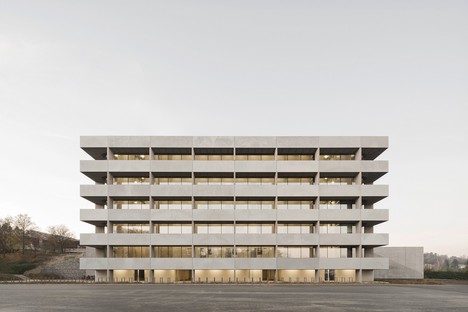