The name of the sports centre recently designed and built by Dominique Coulon & associés is a direct reference to Strasbourg’s role as home to the European Parliament and the European Court of Human Rights. 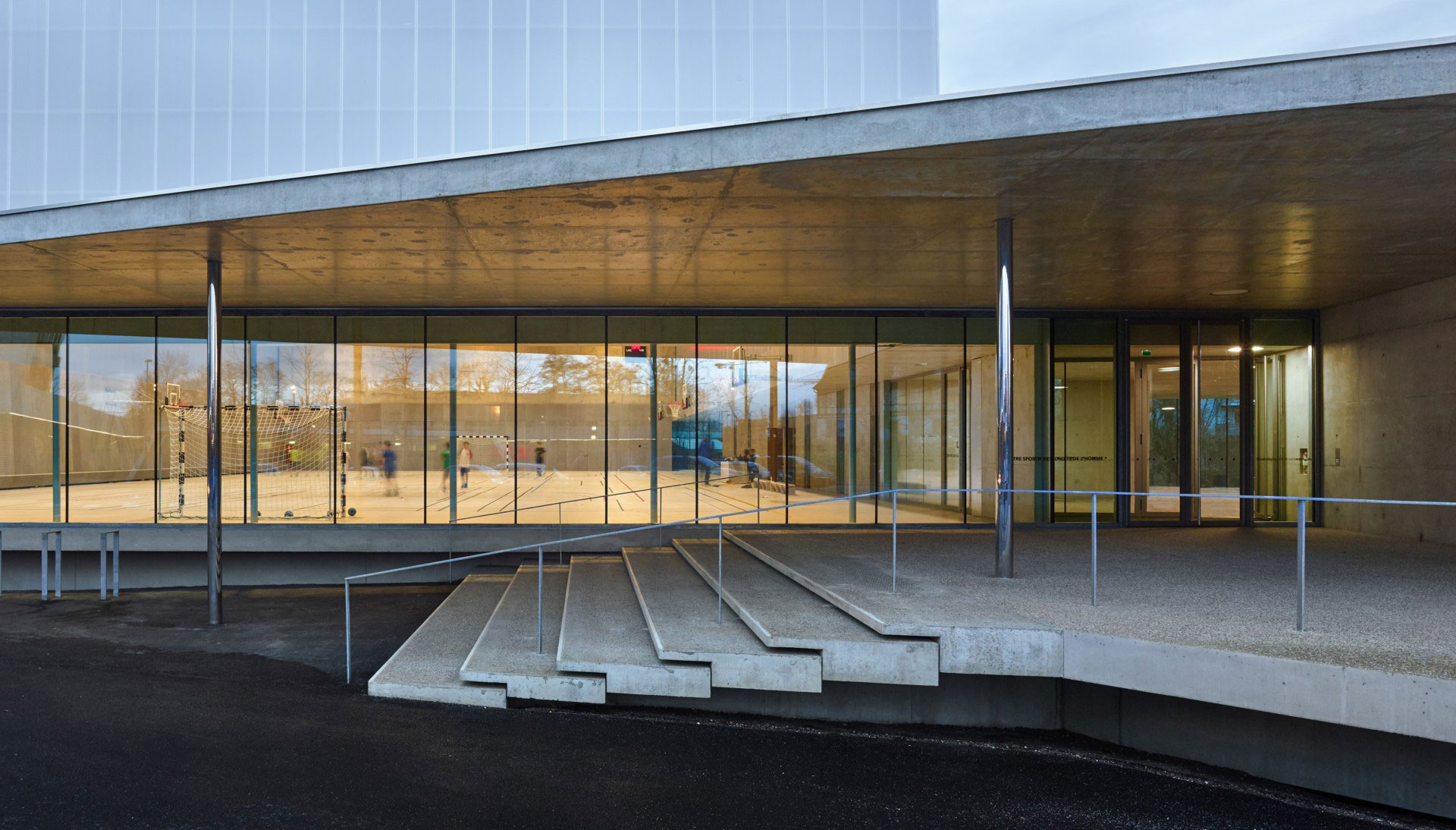 The project recently completed by Dominique Coulon & associés, the Human Rights Sports Centre, completes the campus of the European School in Strasbourg. The school building, already completed, was designed by DRLW Architectes (Dietschy Rey Lesage Weinmann Architectes) with Auer + Webercon. The new sports centre is named “Human Rights Sports Centre” to recall Strasbourg’s role as the home of the European Parliament and the European Court of Human Rights, and consists of a multi-sport gym and a multipurpose hall, as well as changing rooms and other service areas. 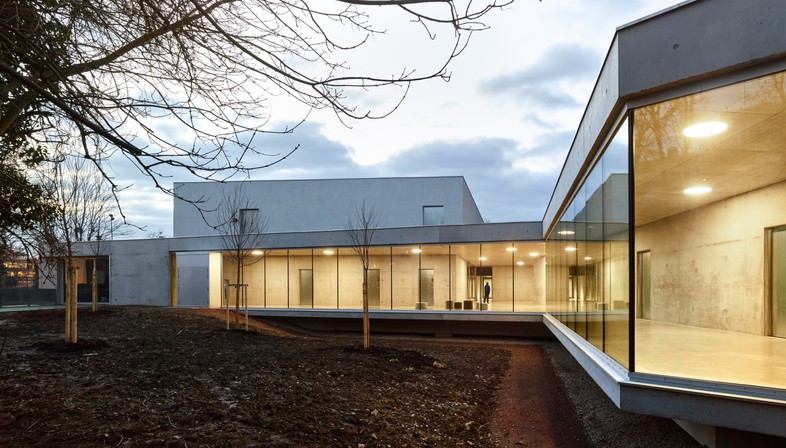 Strasbourg’s role as European capital, home to the European Parliament and the European Court of Human Rights, results in the permanent presence of a considerable number of European and international officials in the city; the city government has responded by giving the city a multicultural education system, the “European School”, offering students a complete course of studies from nursery school through to secondary school graduation.
The city government provided an area in the La Robertsau district for construction of the school campus; a strategic location in a green neighbourhood close to European and international institutions.
The European School was completed in 2015 to plans by DRLW Architectes (Dietschy Rey Lesage Weinmann Architectes) with Auer + Webercon. The building is organised into three separate poles, for different levels of schooling, arranged around an open central space, and is large enough to safely contain 1200 pupils. Guided by the consideration that the area allocated for the school is located in the part of the district with the most trees, close to the European institutions, the architects assigned great importance to the building’s integration into its surroundings and the complex network of roads accessing the site. 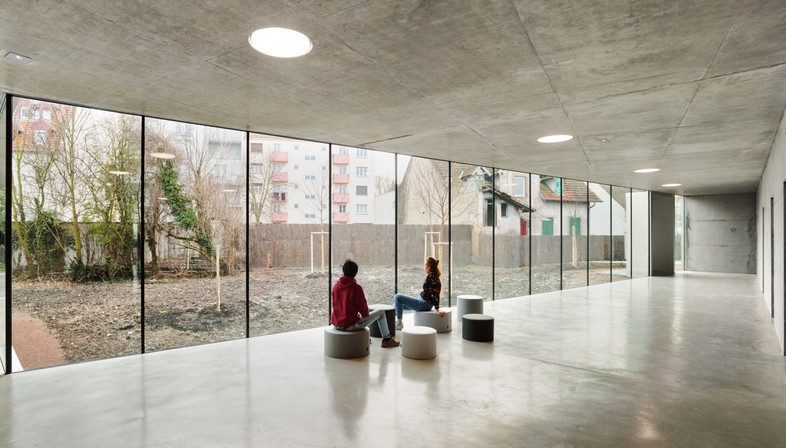 The Human Rights sports centre designed by Dominique Coulon & associés completes the sports facilities available to students and residents in the area. The sports centre is not for students only; the client specifically asked for a facility that could be opened to the public. The programme involved construction of two large spaces: a multi-sport gym and a multipurpose hall where events of all kinds, not only sporting events, could be held, in addition to changing rooms and technical and service facilities. Dominique Coulon & associés designed a building combining architectural and functional qualities with a dialogue with the European School building already present on the site. The architects therefore prolong the logic of “fragments” used in the school building, designing two dissociated volumes set at an angle to contain the two main halls. The larger hall is built on an axis perpendicular to the street, on the northern edge of the site, in a position which minimises the building’s impact on the site and makes it more porous in relation to the landscape. 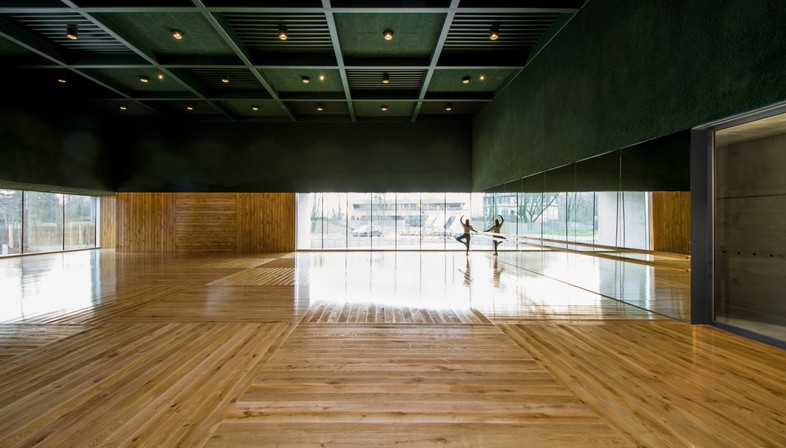 The transparency and continual visual exchange with the outside and between the two halls is permitted by the accessory spaces that divide the two halls, bounded by large floor-to-ceiling windows. The same windows may be found in the entrance hall, providing views of the forest behind the site.
The architects use rough, long-lasting materials: bare concrete, galvanised steel and glass in the multi-sport hall, all in different shades of grey. The multipurpose hall, on the other hand, is square in shape, with a more elegant, precious look; the floor is made of varnished oak parquet laid in a chequerboard pattern, curving upwards to cover part of the walls. The ceiling picks up on the chequerboard pattern of the floor, in a dark green enhancing the warm hues of the wood. 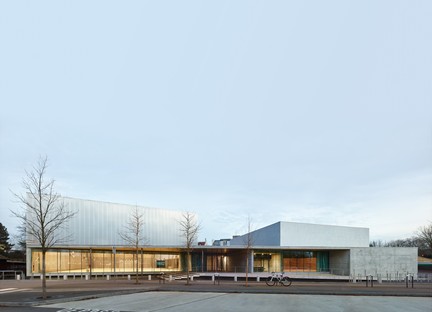 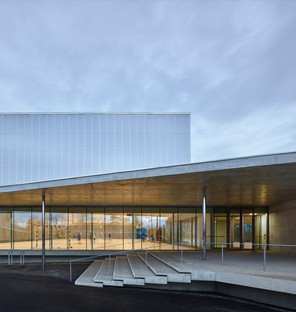 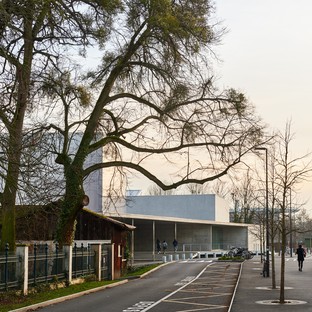 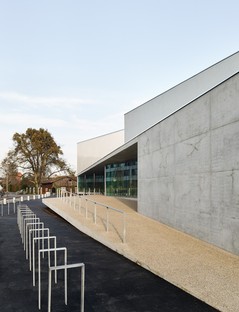 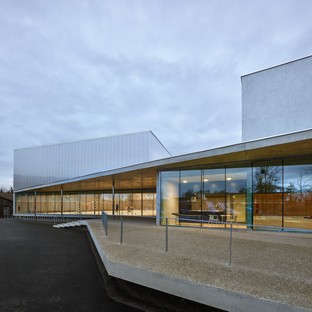 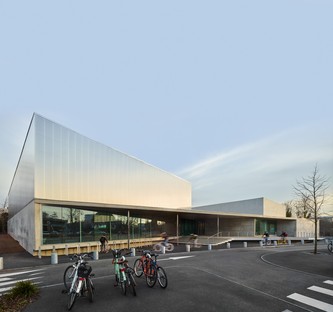 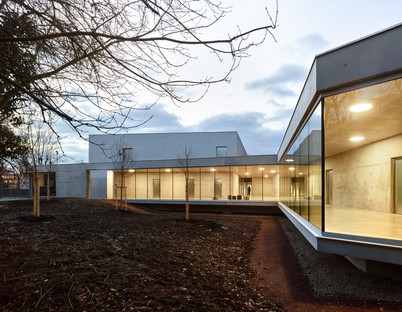 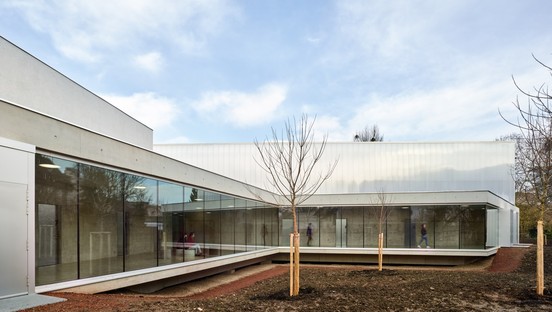 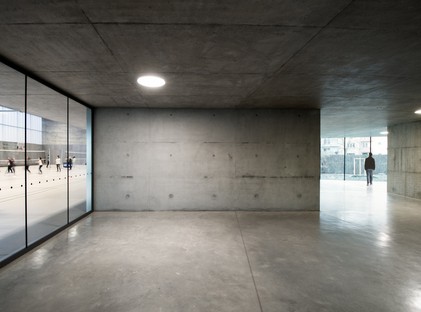 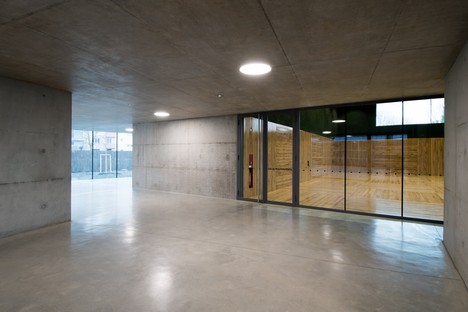 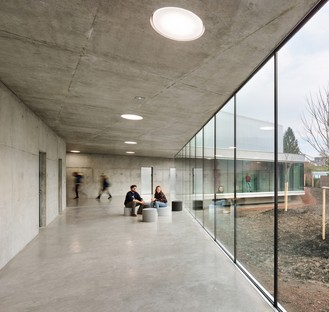 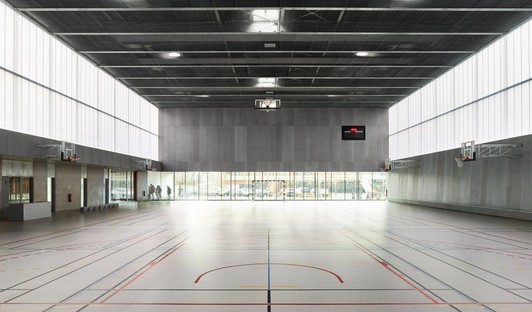 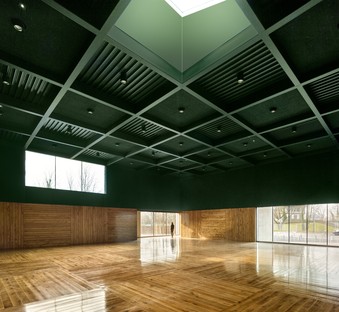 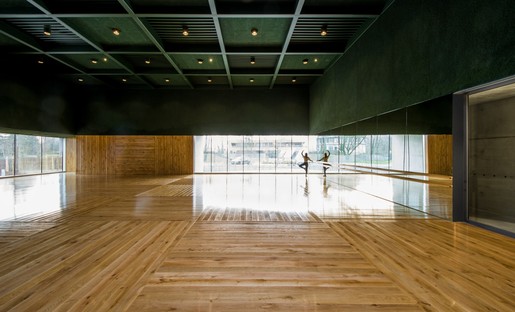 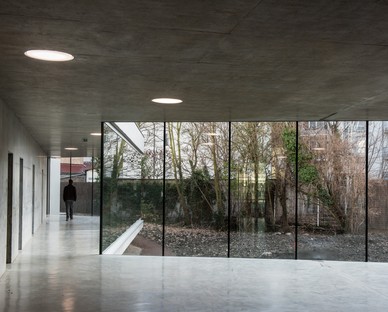 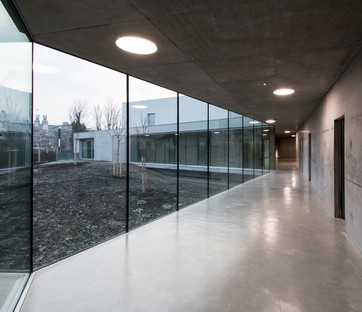 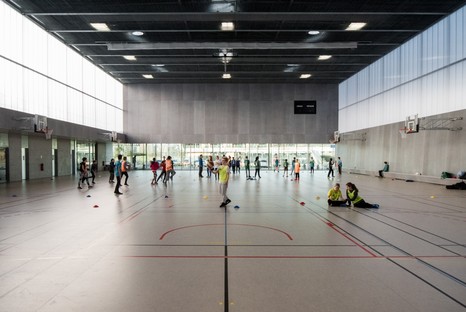 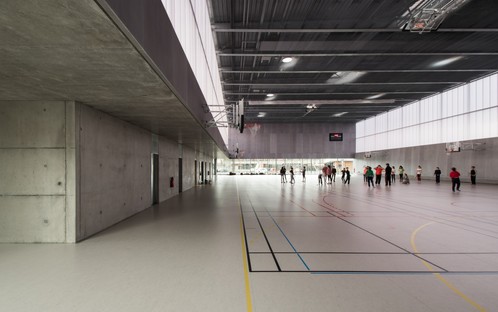 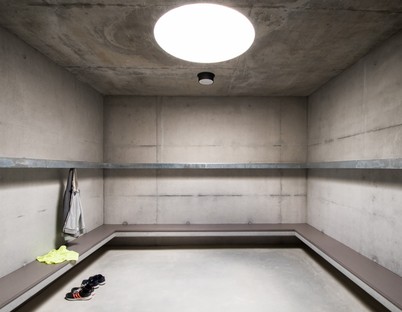