Dominique Coulon & associés designed the new René Beauverie school campus in Vaulx-en-Velin, a small town in the Est Lyonnais. The new school is the key element in a wider-ranging plan for urban renewal including facilities such as a gym and a multipurpose hall that will benefit the community as a whole.

Colour is an important component of all Dominique Coulon & associés’ projects, and René Beauverie school campus in Vaulx-en-Velin, a small town in the Est Lyonnais, part of the Métropole de Lyon, is no exception.
Its shades of blue are the most striking element of the project, dialoguing with the sky as shown in the photographs by Eugeni Pons.
The choice is the result of careful chromatic study; the architects use different hues of blue and take into account the angle of the light to create a series of hues of blue ranging from ultramarine to sky blue with which to paint walls, floors and objects. White is also included in the game, though it never looks purely white due to the orientation of the sun, and its reflections contribute to the sensation of architecture in motion. In the interiors, corridors and classrooms, the architects turn to the warm hues and vitality of yellow to underline the natural light. 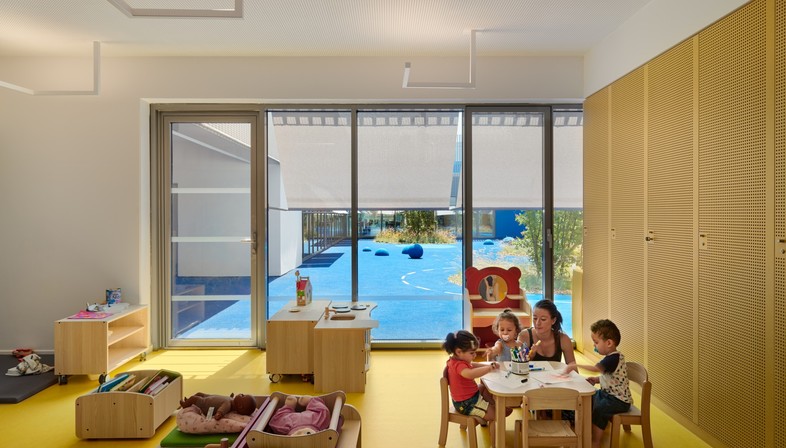 Vaulx-en-Velin is a town with a young population where Dominique Coulon & associés won a 2015 design contest for the construction of René Beauverie school campus. The project is a key element in a wider-ranging programme for urban renewal of the district with great political and social value of its own. The new complex includes not only an elementary school and kindergarten but a creche, a multipurpose hall, a gym and a recreational centre, all facilities designed to meet the requirements of the neighbourhood and its citizens. Hence the need to construct a “recognisable” building for the local people, a public building that clearly serves an urban function.
Despite the school’s many souls and functions, the architects have created a unitary structure, obtained using regular geometric shapes and a comb layout of the main volumes: a solution ensuring that each part of the complex enjoys its own independence. The entrances are all arranged around a common forecourt, extending below the 40-metre-long bridge-like structure containing the elementary school classrooms. The ground floor houses the creche, the gym and the kindergarten, with a big staircase leading to the large first-floor courtyard and the elementary school. The presence of patios on different levels lightens the overall volume and provides the classrooms with natural lighting and ventilation, offering a variety of different points of view over the landscape. 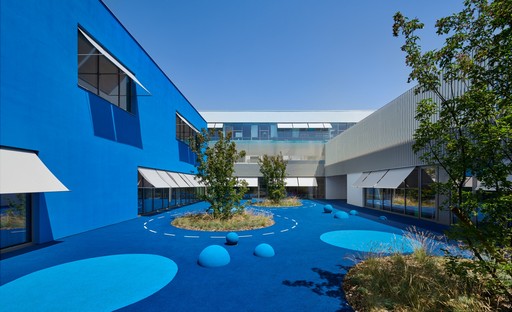 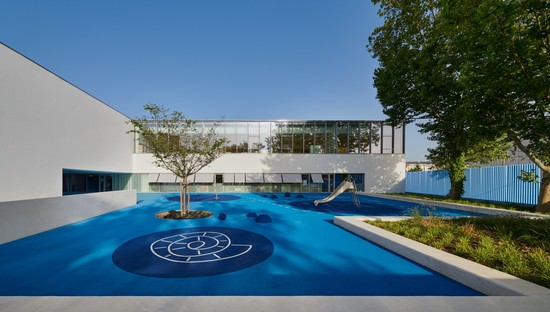 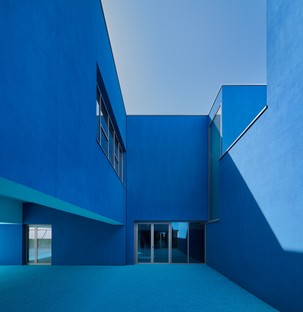 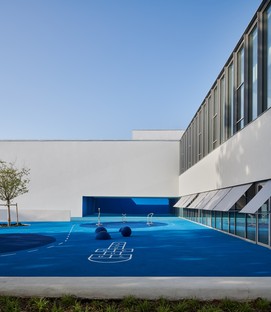 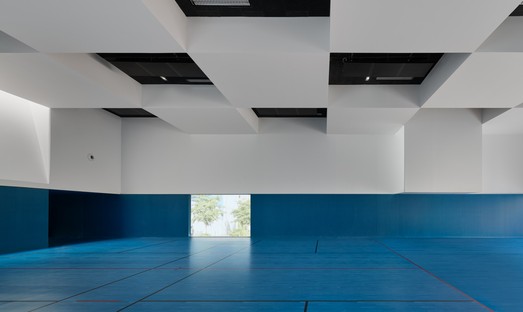 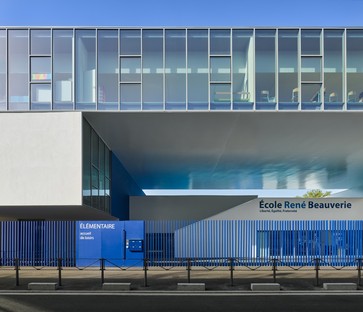 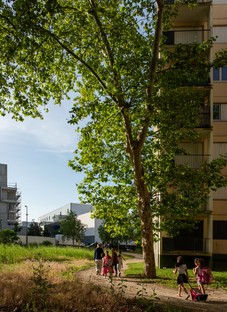 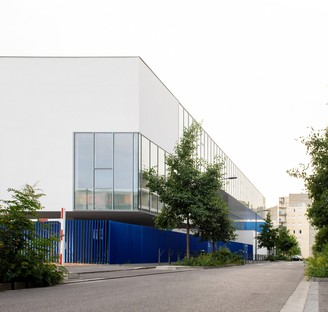 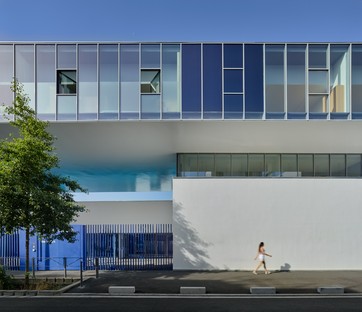 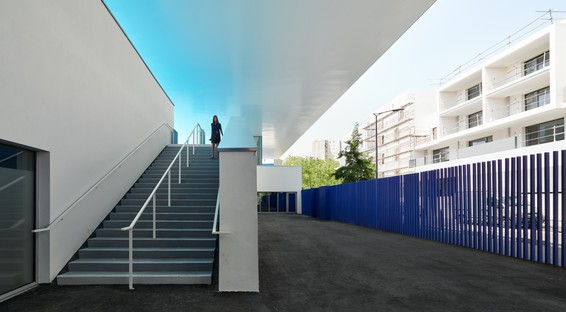 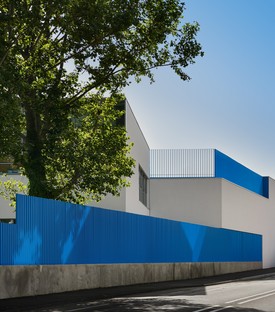 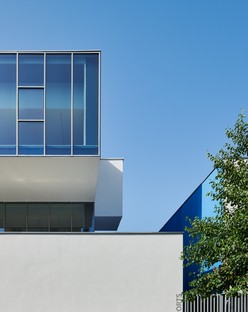 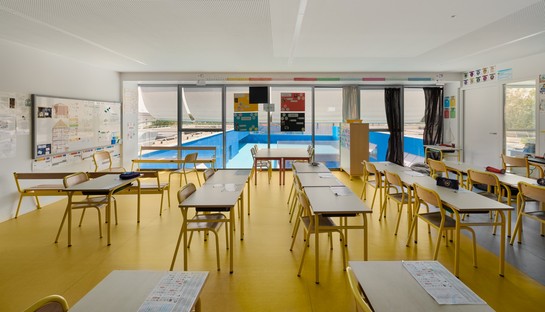 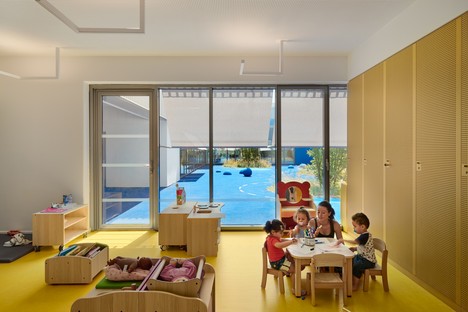 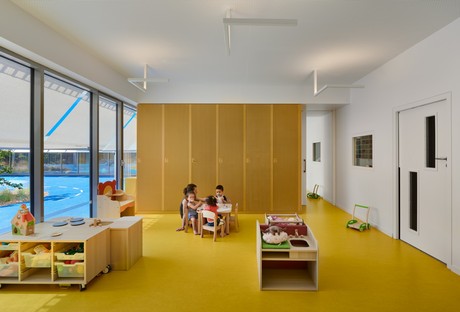 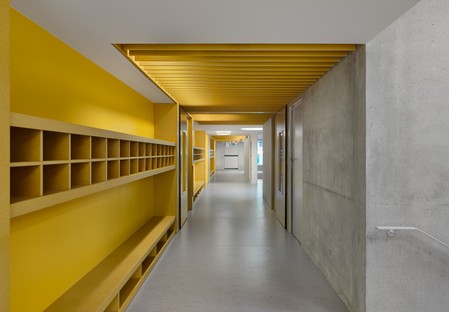 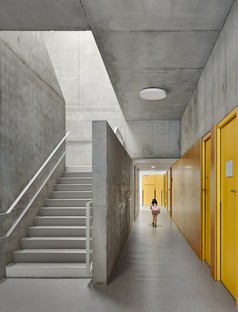