The new Music and Theatre Hall in Odense designed by C.F. Møller Architects has become a driving force for culture in the Danish city, containing a world-class theatre and music hall and the head offices of important institutions such as the Danish National Academy of Music and Odense Acting School, all under a single roof. 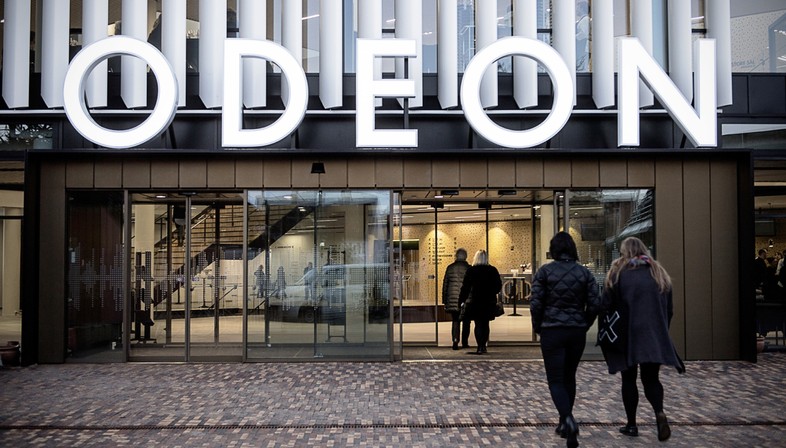 The new Music and Theatre Hall in Odense designed by C.F. Møller Architects has quickly become a new hub of culture in the city of Odense, Denmark’s third-largest city, hometown of Hans Christian Andersen.
The new cultural centre offers plenty of opportunities, as demonstrated by nine days of celebrations held for its inauguration. The 32,000 sqm new building hosted more than 100 initiatives, including theatre performances, concerts, public events and exhibitions, culminating in a gala ceremony upon the visit of Queen Margrethe of Denmark. The Odeon Music and Theatre Hall contains a world-class theatre and music hall and the head offices of important institutions such as the Danish National Academy of Music and the Odense Acting School. The building also contains residential units for young artists and a grocery store. The architects conceived of the Odeon as a cultural centre and a place for the promotion of culture with events both large and small, an important urban landmark that will be a draw for the local population even when there is no show on. The building symbolises the transformation of the city district where it is located into a new car-free district closely connected with the port, the city centre and the railway station. 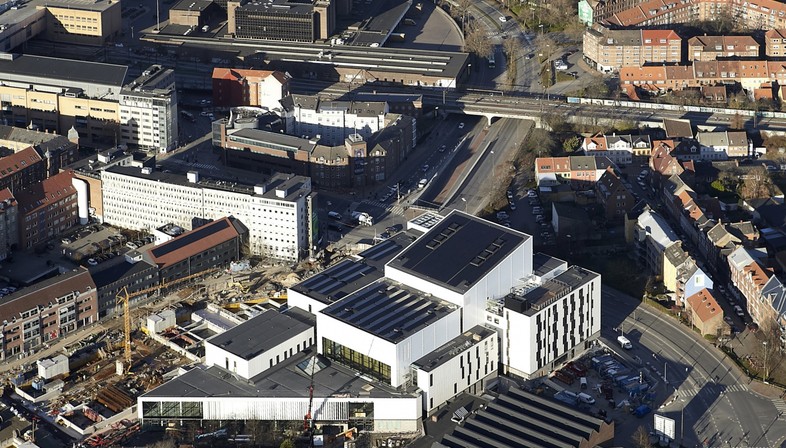 C.F. Møller Architects won the design competition held in 2008 for the awarding of the appointment with a plan based on the idea of making the cultural centre a city within a city. Its urban surroundings provided the architects’ source of inspiration: the Hans Christian Andersen district, bordering on the city’s historic centre with its low houses and more modern neighbourhoods with multi-story residential buildings. Klaus Toustrup, the architect in charge of the project for C.F. Møller Architects, says that the architects used an approach similar to that of urban planning in relation to the building’s context, dividing up cultural functions in volumes of different heights connected by internal pathways and courtyards, which also provide links with the city around it.
The cultural centre contains four performance venues: a big multi-purpose hall large enough to seat 1800 or contain a standing audience of 3000, a smaller hall for 300 spectators, a chamber music hall and a dance hall, as well as a restaurant, a bar/lounge with a panoramic terrace, offices, a cafeteria and an underground parking lot. 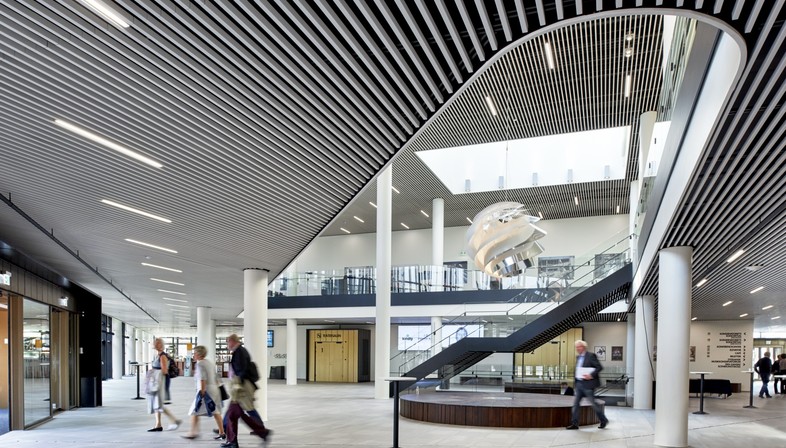 The cultural centre’s complexity and variety of functions are balanced by use of simple materials such as dark brick for the base shared by the whole building, concrete vertical elements modulating the effects of light and shadow on the building’s walls, or the black steel staircase inside, with ash wood flooring.
Architect Klaus Toustrup notes that the desired effect was to create a tranquil background for the many activities that take place in the Odeon. A golden colour was chosen for the large hall to underline its identity as a special place for celebrations and golden occasions. 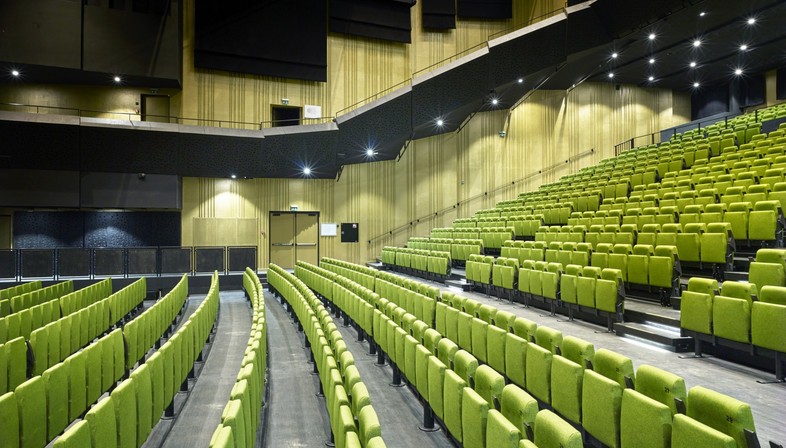 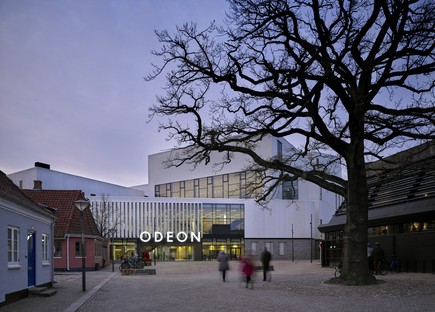 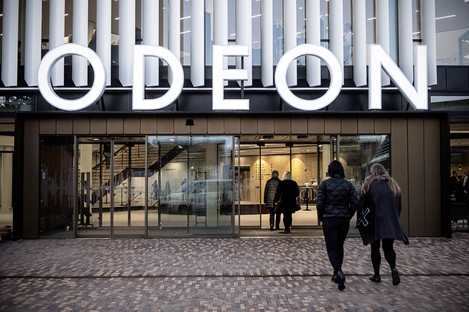 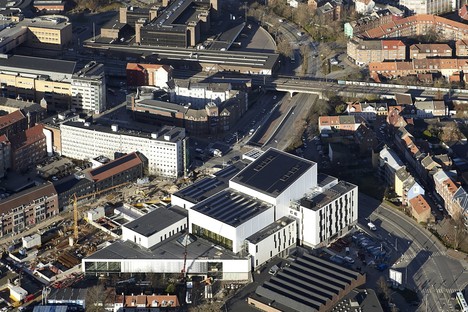 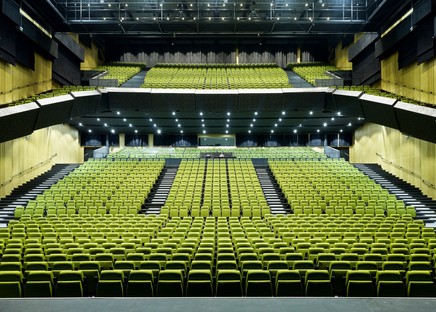 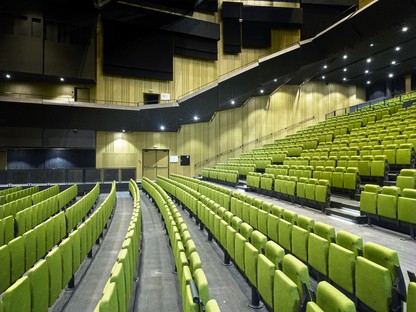 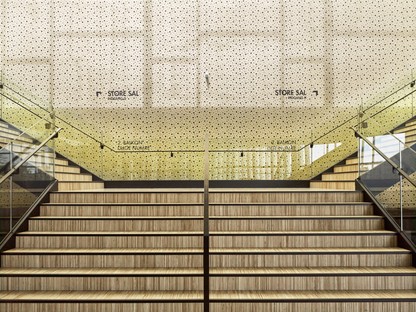 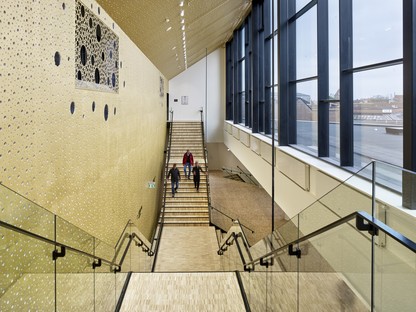 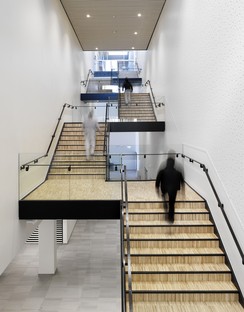 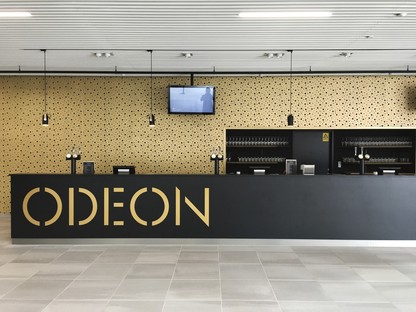 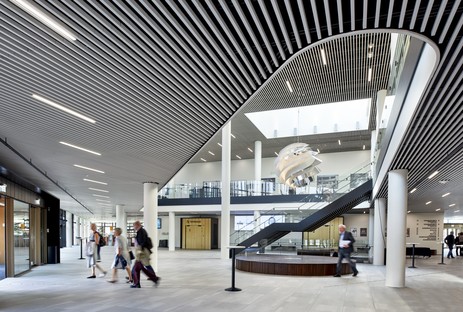 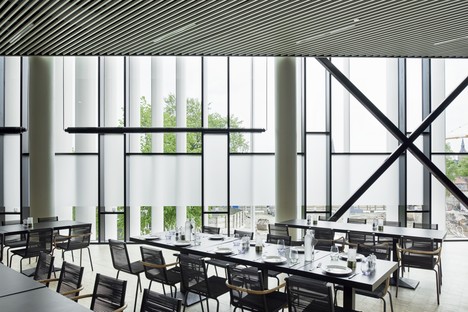 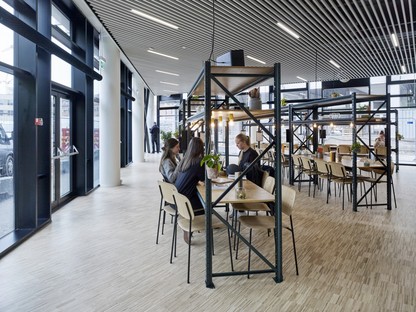 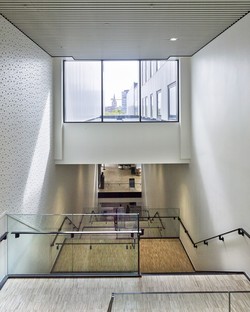 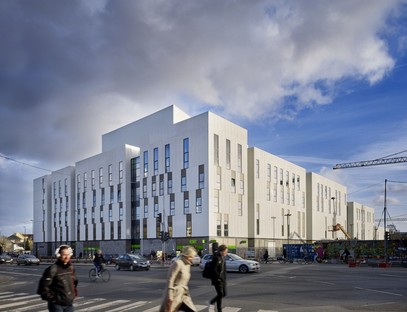 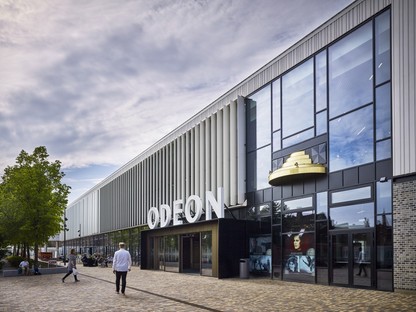