'Mass is More’ is an installation designed by the Institute of Advanced Architecture of Catalonia (IAAC) and Bauhaus Earth, bringing the innovation of solid wood construction to the Mies van der Rohe Pavilion in Barcelona. The project establishes a dialogue between the industrial modernity of the 20th century and the new low-emission buildings of the 21st century. 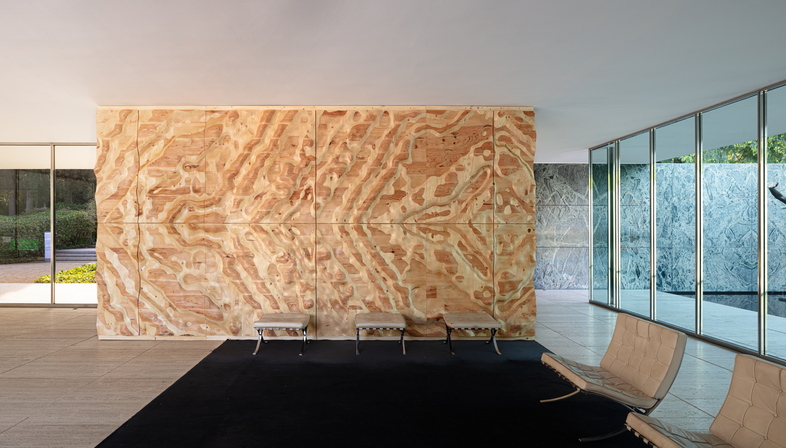 With an installation in one of the sacred sites of 20th century architecture, the German Pavilion designed by Ludwig Mies van der Rohe and Lily Reich in 1929, the IAAC and Bauhaus Earth propose to create a dialogue between the past and future of wood and an exhibition exploring the use of biogenic materials for architecture. The famous pavilion also hosts the biennial EU Prize for Contemporary Architecture / Mies van der Rohe Awards, demonstrating the role and influence of the Fundació Mies van der Rohe in today's architectural context.
As the installation was only open to the public from October 3 to 9, we can enjoy "Mass is More", the project created by Daniel Ibáñez and Vicente Guallart from the Institute for Advanced Architecture of Catalonia (IAAC) and Alan Organschi from Bauhaus Earth (BE) thanks to the photos captured by Adrià Goula. A short period of time, in which the authors use the temporary work to reflect on how to regenerate our cities using low-emission practices, to achieve the EU’s environmental targets for 2050.
Consistent with the architectural language of the pavilion, „Mass is More“ – a direct reference to the English saying „Less is more“ - creates a dialogue between the most advanced materials of the 20th and 21st centuries. The designers opted for a series of elements made of cross-laminated timber (CLT) panels sourced from local forests, to demonstrate the structural capabilities of this new material and its suitability for constructing more sustainable buildings with a much lower environmental impact.
Taking a closer look at the intervention, the design of the installation reflects the formal grid of the original pavilion, creating an alternative narrative and a different way of experiencing the site with new pathways and scenic corridors. It immediately becomes apparent how the entrance to the space inverts the traditional circulation, first passing through the trees in the garden behind the pavilion, offering a new perspective and thus a new experience of the architecture. An elevated walkway leads to a cantilevered platform offering a unique view of the Barcelona Pavilion which, in turn, provides access to an auditorium where small meetings and talks are held.
But the physical installation also includes a 4.8-metre-long diorama illustrating the path of wood from the forest to the city, as a material with carbon sequestration and storage properties. Thanks to an interactive digital application developed by Bestiario, a leading data visualisation company, a comparison can be made between the environmental impact of the 1929 Barcelona Pavilion and the solid wood installation. All this, of course, considering only the architectural elements, such as the roof, walls, columns and floor for a fair comparison. The comparative analysis includes the carbon emissions embedded in each element, as well as the energy used, the kilometres travelled and steps taken during the different processes of extraction, production, transport and assembly.
Analogue labels placed on various vertical elements of both pavilions show all the materials used to manufacture them. Just like food products are required to disclose their ingredients, the same approach is adopted here in relation to the architectural practice to offer maximum transparency. In addition, a video installation by director Jaume Cebolla projected inside the pavilion talks about the material transformations that the timber logged for the construction of the solid wood structure underwent, from a first-person point of view.
Mass is More becomes an excellent example demonstrating how the choice of certain materials can limit the environmental footprint of construction because „most of the emissions from buildings occur during the construction process, including the sourcing of materials, rather than in the emissions from their operation“, as we read in the press release. 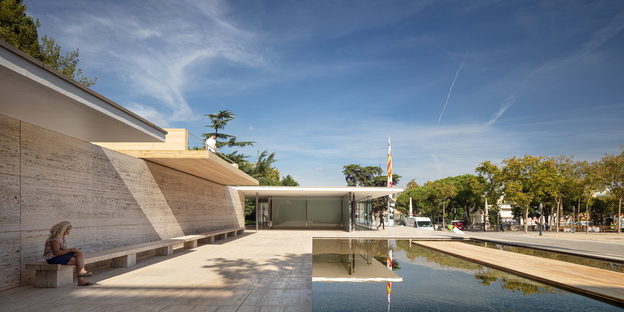 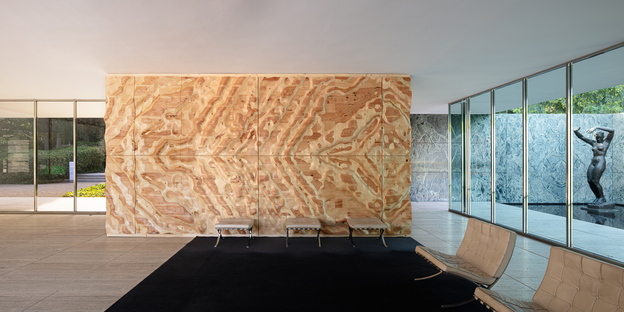 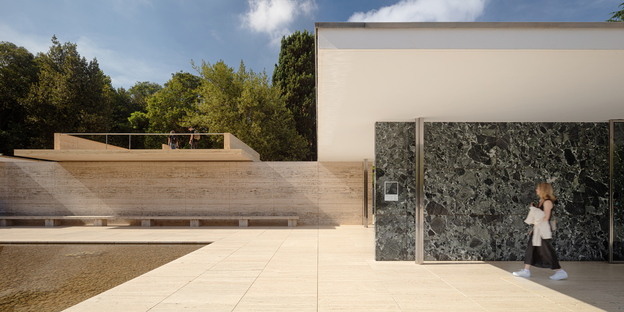 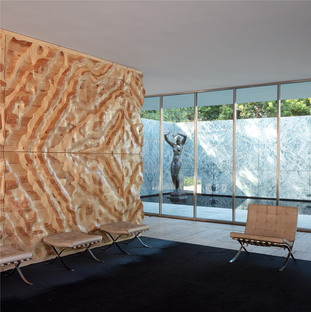 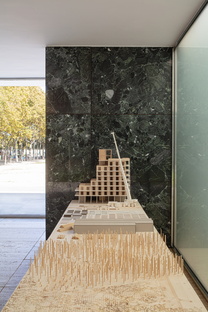 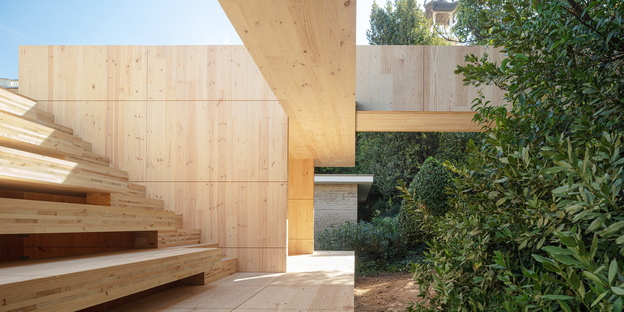 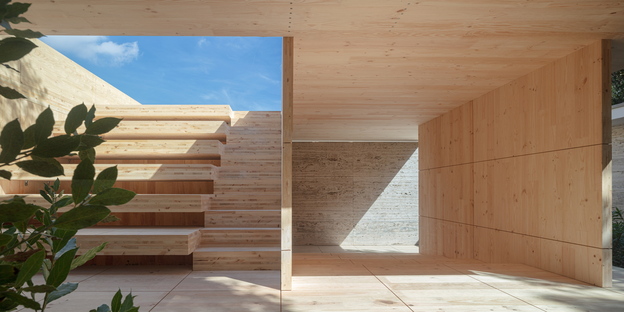 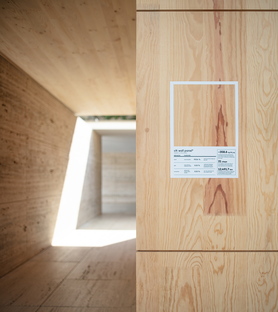 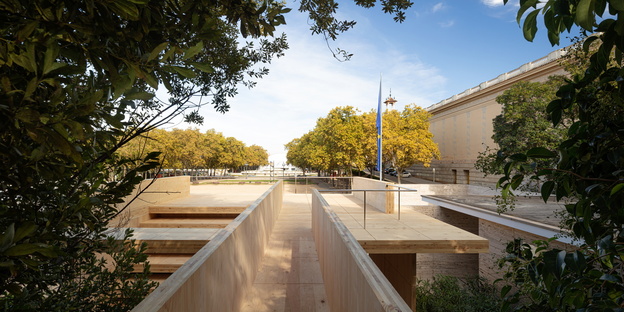 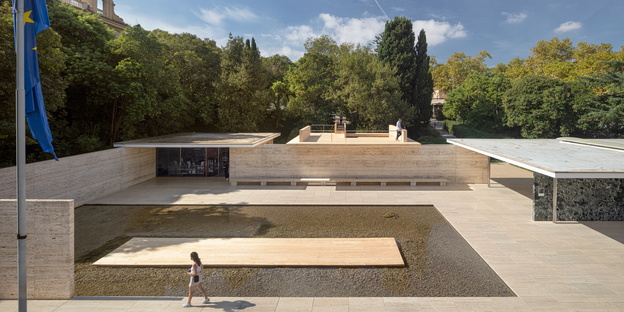