The Studio Perspektiv designers, who have been involved in the interior design of work environments for years, have completed the new design of WebSupport offices in Bratislava, Slovakia. 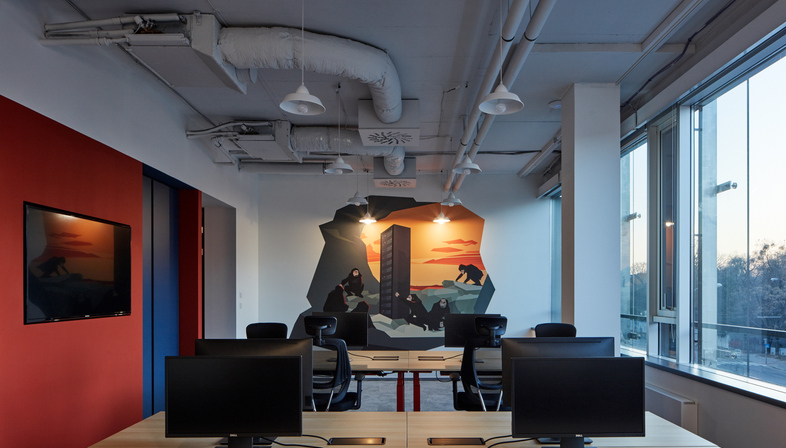 The Studio Perspektiv designers, who have been involved in the interior design of work environments for years, have completed the new design of WebSupport offices in Bratislava, Slovakia. Spaces that tell the story of the company's core business and inspire employees as they work.


Major changes are often reflected in the architecture. This is the case for one of the biggest players in the Slovakian tech community, WebSupport, a major Central European provider of web hosting and web services. It went through lots of changes in 2018 and has now become a member of the international Loopia Group. This bold step was a turning point that ended with a move from the centre of Bratislava to Mlynské Nivy. This is the new business district developing around the large domestic and international bus terminal of the capital of Slovakia, built midway through last century.
WebSupport approached Studio Perspektiv to design their new work environments. The Prague-based design firm is known for its eclectic creations of sustainable workplaces, inspiring spaces that leverage current and future potential to create unique concepts that meet the needs and desires of the users.
Studio Perspektiv took on board the communication approach and visual style of WebSupport, already known through the tech firm's digital presence. So the architects decided to design the office as if it were a computer motherboard, the basis for everything that is digital. Each functional part is implemented within a neutral colour palette of shared spaces. Every section was assigned a colour based on brand identity graphics crafted by the graphic designer, Pavel Novak. The nuances of the shades and the infinity mirrors with the endless neon reflections give the rooms the specific depth of a cartoon image.
You get the feel of WebSupport's open-minded approach before you even cross over the doorstep. This is because the project aims to engage with the exterior so everyone can see what the new tenants on the third floor of the building are up to, immediately recognising that they're far from ordinary.
The space is arranged to be intuitive: the main hallway is a natural invitation to visitors to the communal area that is directly connected to the terrace. This central “living room” alongside the terrace can be turned into an attractive events space.
The large dining table immediately became the meeting point for shared breakfasts and lunches. Materials like the spruce cladding, the untreated sheet metal countertops and the bare ceiling that exposes all the system workings really give you the impression of an unusual workplace, completely unlike the traditional office environments that the building itself suggests.
Despite all the major changes in the company structure, the main goal of the architects from Studio Perspektive was to craft a work environment that would reflect their brand identity on the one hand but that would also continue to be the relaxed, family-like atmosphere that all of the employees were used to. This approach has helped the tech company to build and boost its corporate culture and at the same time helps the team to be more effective and focused on their jobs. 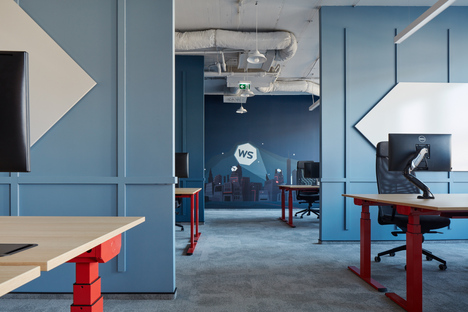 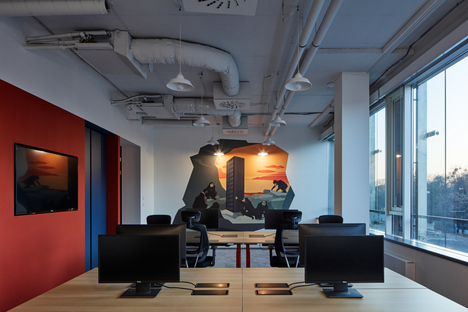 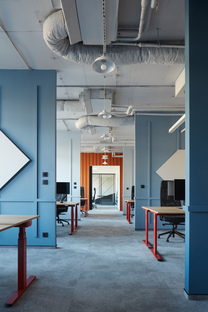 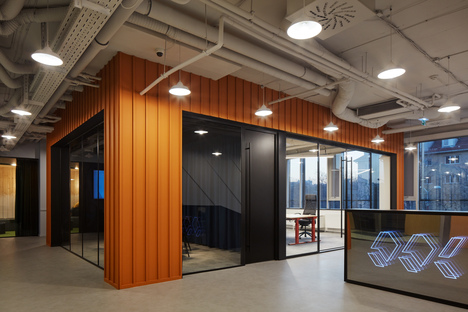 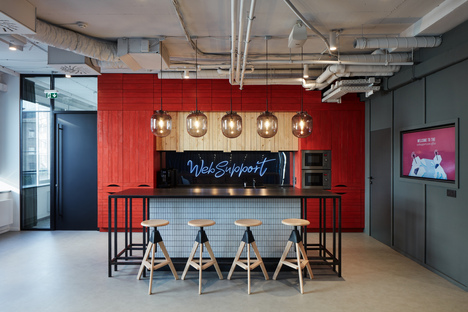 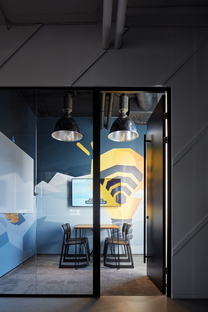 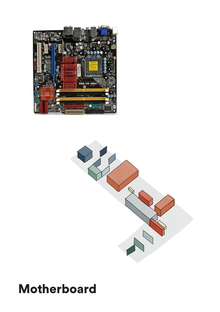 HubHub, a co-working space in Prague by Studio Perspektiv