Lonna Sauna by OOPEAA in Helsinki

OOPEAA, Office for Peripheral Architecture, has completed a new public sauna on the island of Lonna off Helsinki.

OOPEAA, Office for Peripheral Architecture, has completed a new public sauna on the island of Lonna off Helsinki. The construction has been built using only natural materials and is part of a historical context dating back to the 19th century.


The project by OOPEAA, known to Floornature readers for Casa Riihi and the chapel of Suvela (link), is the output resulting from the decision of the governors of the island of Suomenlinna - a world heritage site - to revive Lonna, another stunningly natural island located in the Helsinki archipelago, to construct a public sauna. Until not long ago, Lonna was a military zone, and therefore off limits to the general public. The buildings there were constructed in the 19th century when Finland was under Russian rule.
The 190-square-metre sauna has been built using only natural materials with visible, untreated wooden logs and an iconic zinc plate roof. Wood-burning stoves provide the heat and it all blends into this practically untouched landscape. It is set slightly apart from the complex of historical buildings, on the banks of the island and gives users eye-catching views across the archipelago.
This project sits at the crossroads of the almost wild nature of the place and the nearby city, a favourite of OOPEAA, that is inspired by these “in-between” states - urban and rural, traditional and contemporary, local and global. Because Lonna, which you can only get to by boat, gives users something that goes far beyond the simple experience of the community sauna, a tradition that seemed to be passing into oblivion but that is now picking up against thanks to targeted actions. Visitors to Lonna are greeted not only by an original, cosy building for a healthy, shared ritual but also by a place that provides a calming and peaceful experience, rare in this frenetically paced world. 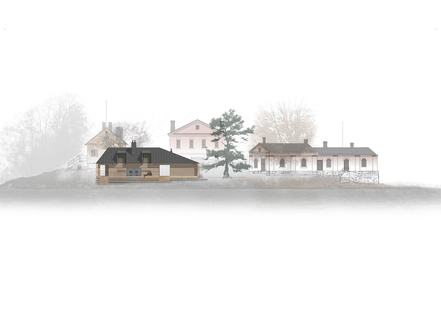