The corporate kindergarten located at the headquarters of the mobile game developer Supercell in Helsinki was created based on a design by the Finnish interior design studio Fyra. An intervention that starts from the children’s wellbeing, enabling a visual and physical connection with the surrounding landscape. 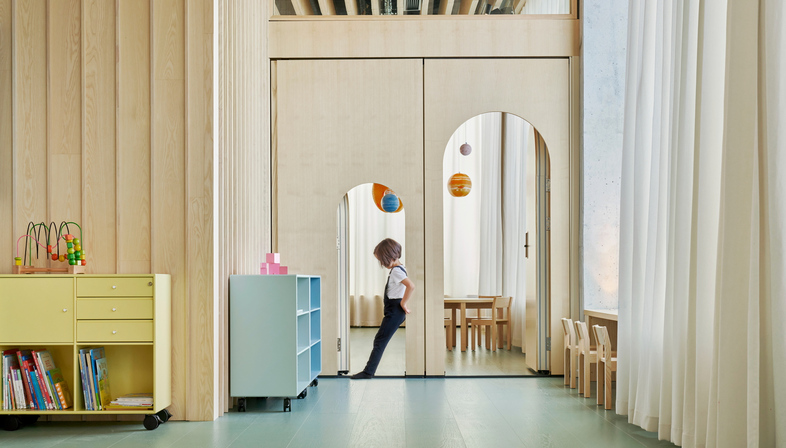 At the end of the summer holiday period par excellence in the northern hemisphere, here we are with a school project for you. A corporate kindergarten located at the headquarters of the mobile game developer company Supercell. The company’s headquarters, an impressive wooden structure built by Anttinen Oiva Architects at the entrance to the Jätkäsaari district in Helsinki, is part of the new Wood City, an urban residential neighbourhood constructed in wood, developed in collaboration with the Finnish construction and project development company SRV and the renewable energy company Stora Enso. The district is located in Jätkäsaari, on the southwestern tip of central Helsinki, facing the open sea. The area originally housed a freight port and has undergone a massive transformation process to become a new residential area. When completed in 2030, 18,000 residents will live here and there will be jobs for 6,000 employees, including Supercell.
The gaming company offers its employees a kindergarten run by New Nordic Schools and has commissioned Fyra to design the interiors.
Founded in 2010, Fyra has established itself on the international interior design scene, in particular in recent years thanks to the prestigious awards won, from the Dezeen Awards 2021 to the Architizer A+ Award in 2022 as Best Interior Design Firm. Faithful to their philosophy based on collaboration and functionality with sustainable choices, the design starts precisely from the users, in other words the children attending the kindergarten. To collect the ideas and requests of the user group, various workshops were organised by the children’s architecture school Arkki. As the designers explain in their press release, "the point of the design process was to create a functional space that would support children’s development and inspire creativity, security and joy."
Taking into account the children’s input, the heart of the common area is a large open serving kitchen characterised by the theme of hearth and conviviality which, in turn, favours the children’s interaction during lunchtime in a homely and inspiring setting. The relaxation area, instead, has been designed with maximum acoustic comfort in mind, to ensure that children can rest properly during nap time.
All the design choices take into consideration not only the needs of the children, but also the location of the new nursery, just a few steps from the Baltic Sea. This proximity has meant that the sea and nature are the strong themes running through the interior design. Fyra has favoured an organic design language, where the abundant use of wood speaks both to the building and to its surroundings, with wavy and round fish-inspired shapes softening the space and adding to its playfulness.
Of course, there is no shortage of illustrations and decor elements to stimulate and accompany the children during their day in kindergarten. The Piñata animation and illustration studio has created an entire cast of animal characters that roam the nursery, adding fun little surprises to the space. The wave paintings on the large street level windows, on the other hand, offer protection and privacy from outside streets.
Let’s be honest, which parent would not like to take their child with them to work, leaving them in such a beautiful and welcoming space? 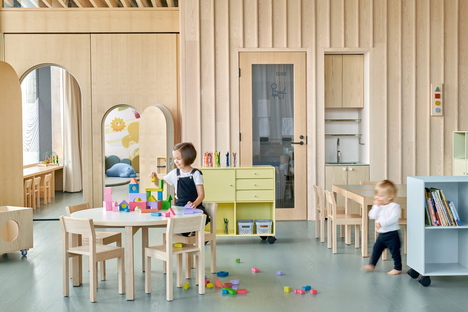 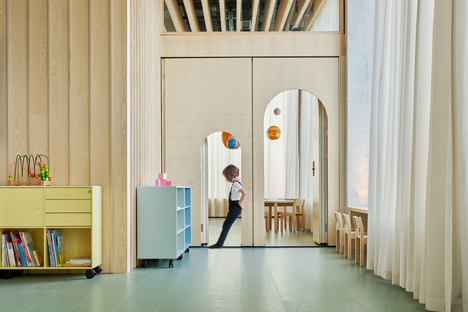 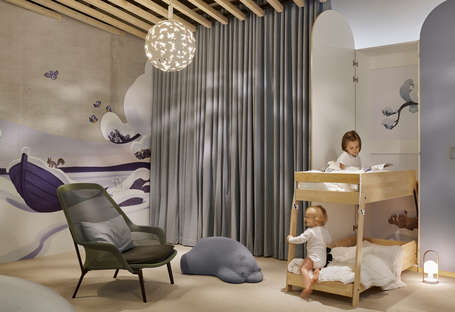 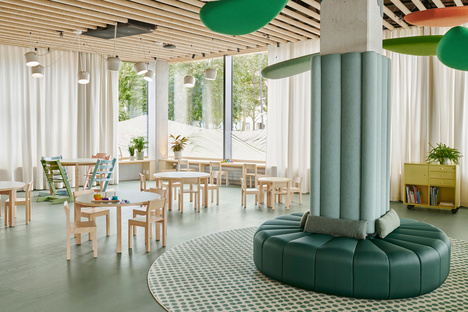 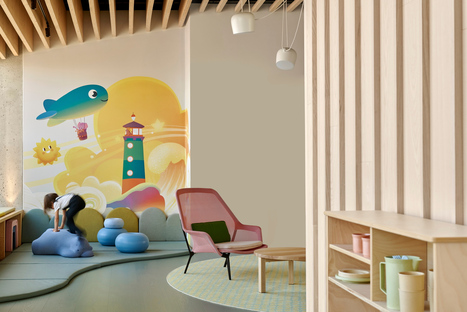 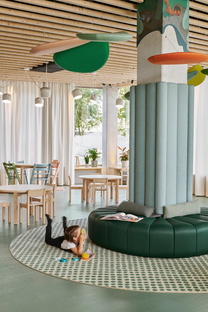 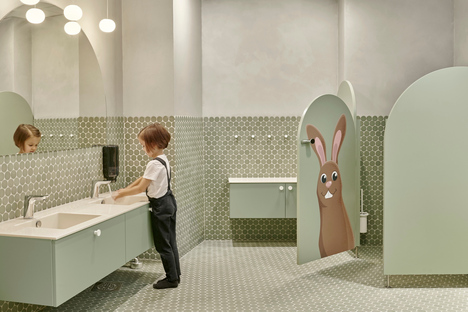 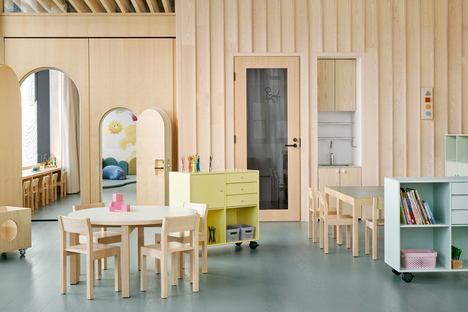