It’s intriguing how the name of the project by young architects Marie Combette and Daniel Moreno Flores in Ecuador, La Cueva della Mini Bestia, which translates as The Cave of the Tiny Beast, riffs off the name of their studio. The project involves restoring, or rather building, a small house in Quito for a couple and their dog.

Home Sweet Home: the right to housing was first enshrined in the Universal Declaration of Human Rights, promoted by the United Nations and signed in 1948. It is incorporated in many constitutions, but as the Italian saying goes, “tra il dire e il fare c’è di mezzo il mare”, meaning between good intentions and real results, there’s an ocean to cross, similar to the English “there’s many a slip ’twixt the cup and the lip”. On the one hand, there is a continuously growing demand for affordable but decent housing. On the other hand, our contemporary cities are full of unused, wasted and underused places, which are gradually forgotten. The architects Marie Combette and Daniel Moreno Flores, founders of the firm called La Cabina de la Curiosidad, see lots of potential in these spaces. They need to be reorganized to boost the wellbeing of each individual and, if possible, using the resources we have at hand, all while integrating the existing infrastructure.
Behind their work is the firm belief that architecture must be accessible to all. The two architects demonstrate that with enough consideration and the right intentions, all spaces can be transformed, whether it’s a small storage space, an abandoned room, or spaces that we didn’t even imagine existed.
Young people are particularly affected by the problem of finding a house to live independently because they are often hampered by a lack of money. So often—not only in Quito—parents make part of their own homes available. We’re talking about underused areas or places that need refurbishment, so their children, on their own or with their partners, can create their own world. If the government doesn’t intervene, those who have the means do.
This is the exact situation of the project called La Cueva della Mini Bestia, which translates as The Cave of the Tiny Beast. This small, almost 50-square-metre home is simply the combination of two rooms that were initially a studio inside the main house in a residential district of Quito. The architectural project was developed quickly and is based on the idea of combining the two areas, which are on two levels. After punching a hole in the ceiling, a multipurpose piece of furniture has been used to reorganize the reclaimed two-level space. This timber construction defines the area and acts as staircase, kitchen, cupboard, desk, shelf, and railing, making the absolute most of the double height down to the last millimetre. A very eye-catching solution, carefully studied by the designers, which allows the users, a couple and their dog—the “beast”—to enjoy a two-storey house with the privacy they need, despite the compact size. Speaking of privacy: the bedroom is protected by a 10-metre long curtain, a space in the space on the upper level. And another small gem is revealed here too: the cupboard in the old studio was divided and turned into the wardrobe that stands against the new wall separating the “cave” from the main house.
With La Cueva della Mini Bestia, the architects from La Cabina de la Curiosidad have whet our curiosity, and at the same time have shown us that with a touch of imagination you can create engaging, affordable and independent opportunities even under the same roof as your parents. 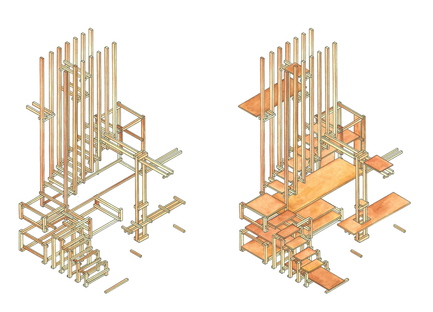 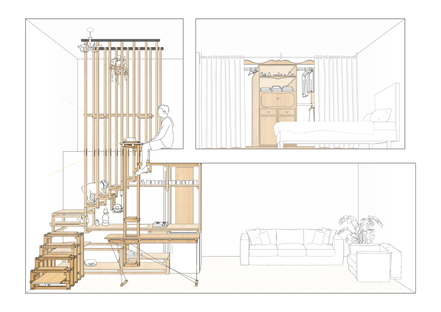