Swedish architecture firm Bornstein Lyckefors Arkitekter, together with Swedish landscape architects from the Mareld Landscape studio have recently renovated the central square of the town of Kärdla, in Estonia. The intervention is one of several projects launched to celebrate the centenary of the nation’s declaration of independence. 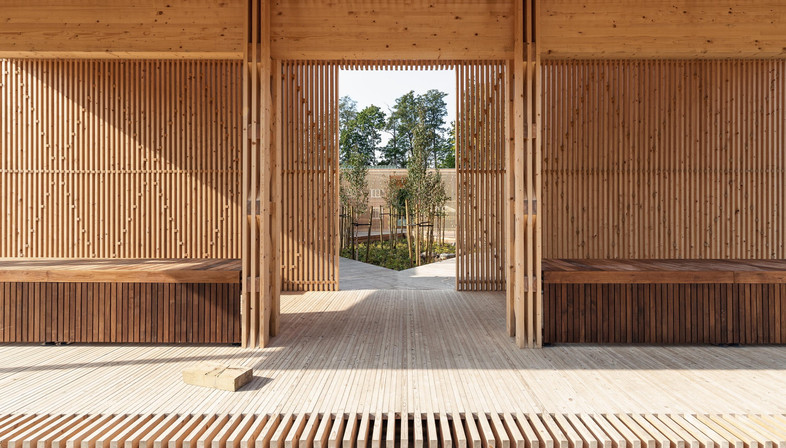 A little over 100 years ago, from 1918 to 1920, the Estonian people were involved in the Estonian War of Independence against the Soviet Offensive of the Western Front. The most significant day for the small nation was February 24, 1918, when Estonia declared its independence. An important date commemorated as a national holiday and whose 100th anniversary has inspired various initiatives, including some of an urban and architectural character. Because what’s better to celebrate a nation, than providing citizens with well-conceived shared places?
This is precisely what took place in the city of Kärdla, located on the island of Hiiumaa – or Dagö in Swedish – approximately 28 km or 90 minutes by ferry off the west coast of Estonia. An open international competition was launched calling for a renovation of the city’s central square, which included features such as a market, a public library and bus stops. In other words, everything that makes the city centre an attractive space to its inhabitants.
Swedish studio Bornstein Lyckefors Arkitekter, in collaboration with the Mareld Landscape studio, won the competition that included the construction of an iconic pavilion for the city, completed last year. The project conceived by the two Swedish studios starts from a careful analysis of the local context. Kärdla is the only town on the island of Hiiumaa, which boasts a population of just over 3,300 residents. It is the administrative, economic and cultural centre of the island, where Hiiumaa’s only elementary school is located, together with the island’s hospital. A town which in recent years, however, has been characterised by a significant urban expansion. The promoters of the project, well aware that new flows of people must be created to breathe life into the centre, wanted to concentrate public life around the central square. It is precisely for this reason that the project proposed by Bornstein Lyckefors and Mareld introduced a market pavilion, which includes landscape architecture as an urban element to break up the large urban void of the square.
As the architects explain: “The layout of the pavilion is based on the idea of the Hortus Conclusus, the enclosed garden. Thus, at the same time it becomes a void and a container of space and landscape, a frame with which to relate in the construction of the larger urban landscape. The walls surrounding the inside serve only as a backdrop to the park.”
The innermost space serves as a place of contemplation, while on the outside we find the whole programme designed by the architects to enliven the surrounding square. This includes the former street market, an urban stage for public events and an info-centre. Everything takes place inside the pavilion, a structure built entirely in wood. The wooden pieces used to create distance between the bars are placed in such a way that they resemble and pay tribute to patterns used in the former textile industry that was once Kärdla’s largest industry. The glass-covered roof, on the other hand, enhances the sensation of being covered in a delicate, semi-transparent wood fabric.
Over time, the wood will lose its colour and blend in with the road, the closed garden will become denser and greener, tightly incorporated into the urban fabric, of which it will continue to remain a fixed point named Kärdla Bouquet Park by the designers: a precious garden wrapped up by the city like a bouquet of flowers.
The project designed by Bornstein Lyckefors Arkitekter in collaboration with the Mareld Landscape studio therefore proposes – with a simple yet highly effective structure – a real local community activator. 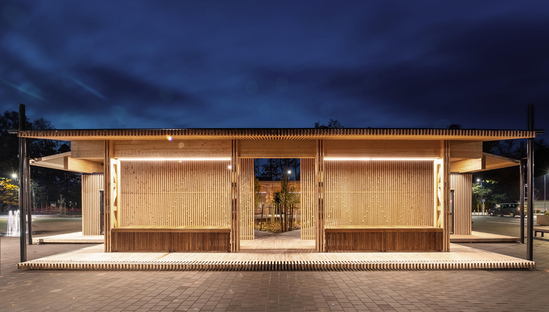 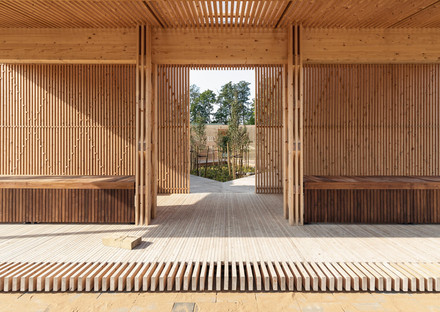 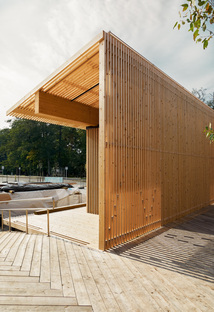 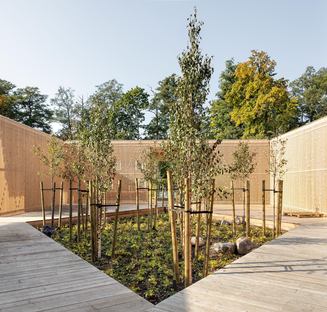 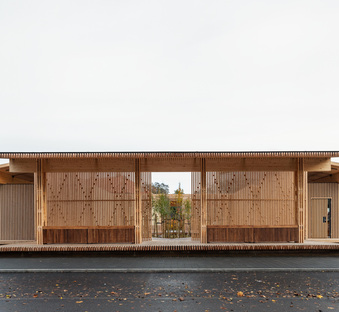 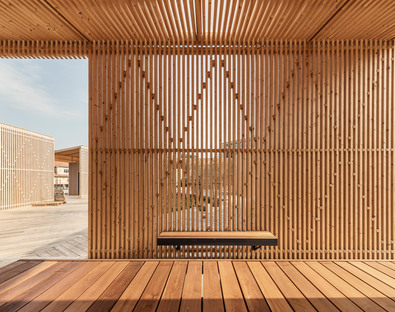 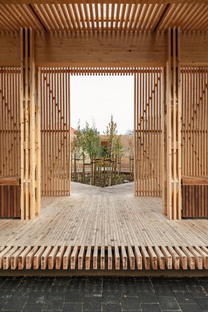 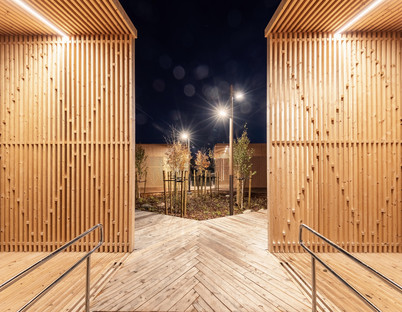 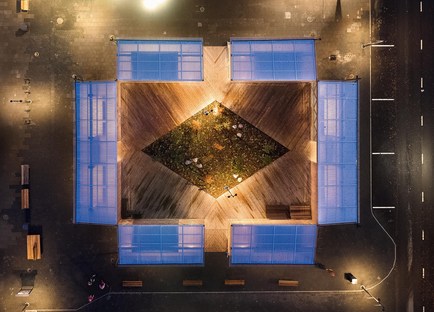 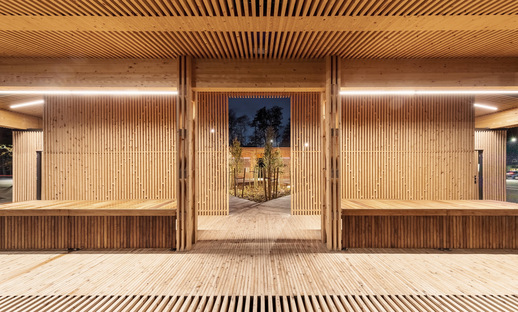 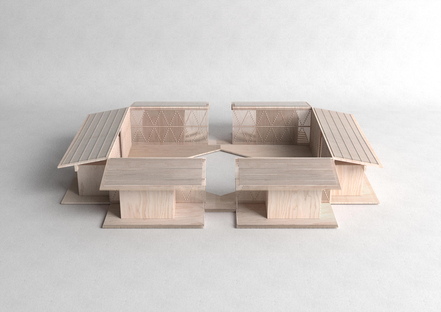