We were very pleased to learn that Catalan-based firm Batlle i Roig won the Landscape of the Year award at the 2018 World Architecture Festival in Amsterdam. 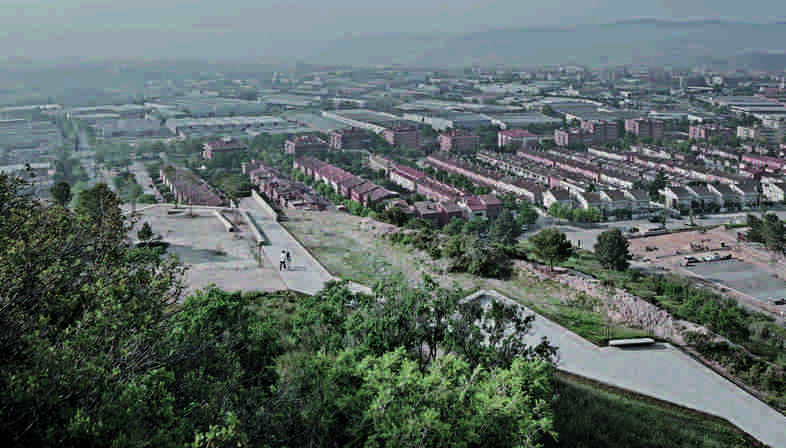 We were very pleased to learn that Catalan-based firm Batlle i Roig won the Landscape of the Year award at the 2018 World Architecture Festival in Amsterdam. An important recognition for its project for the environmental reclamation of an old gypsum mine in Igualada, Barcelona.


Catalan-based architecture firm Batlle i Roig were guests of Iris Ceramica Group at the Venice Architecture Biennale, with Mario Cucinella MCA, curator of the Italian representation, and Mexico's Harari Landscape Architecture as part of the Round Table discussion around the theme of the 16th International Architecture Exhibition – La Biennale di Venezia, FREESPACE. They have won the Landscape of the Year award at the 2018 World Architecture Festival, which just ended in Amsterdam, for their project to reclaim the old gypsum mines of El Caret and El Pelfolt on the outskirts of Barcelona. After the closure of the played-out gypsum mines, they were used as a municipal waste transfer station until the end of the 1970s when that facility was also closed and the whole area was abandoned without any further corrective action or clean-up.
Batlle i Roig's project to rehabilitate these highly degraded sites, completed in 2018 after two years of hard work, is part of the global project for the Igualada Green Ring, which aims to create a set of pedestrian and bike paths in the form of a green belt that runs right around the outskirts of Barcelona. A more wide-ranging project that we have already covered with the presentation of another part that was also designed by the Catalan firm, a new bike and pedestrian path along Avinguda Diagonal that turned a long-forgotten no-man's land into a place that gives people somewhere to meet and provides seamless urban continuity for the metropolitan community (link).
After carefully studying this over-exploited and debased site - first as a mine, then as landfill - Batlle i Roig saw its great potential: unparalleled scenic views of the city's skyline because it stands higher even than mount Monserrat. Not only that but they also discovered small zones where the original pine groves still stood, even after suffering through all the activities on the site. This gave them the idea of creating some attractions that would pull the community back to these suburban no-man's lands, giving people something that would make them want to take back ownership of these spaces in order to experience and make the most of this stunning view of their city.
So the design team, true to the firm's idea, whose approach to the major challenges of urban planning over the upcoming years is to help overcome the barriers that have been built and or have arisen between the urban spaces and the city, crafted a succession of walkways and bike paths with a number of lay-by areas.
They used materials in keeping with the site and actually sourced there, and the projects were supplemented by the reclamation of the landscape and of the local biodiversity, laying the grounds needed to generate a new dynamic in the place that will progressively improve its environmental conditions. A delicate operation that also involved hydrogeological studies into the dynamics of rainwater absorption, and planting olive and almond groves to help shore up the old open quarry faces.
The efforts by Batlle i Roig in the area known as Les Guixeres of Claret and Pelfort paid off when they won the Landscape of the Year award at the 2018 World Architecture Festival (WAF), which just ended in Amsterdam. The judges were impressed by the landscape's innovative use of materials and its “poetic response using minimal means [engendering a] process of observation, translation and transformation.” 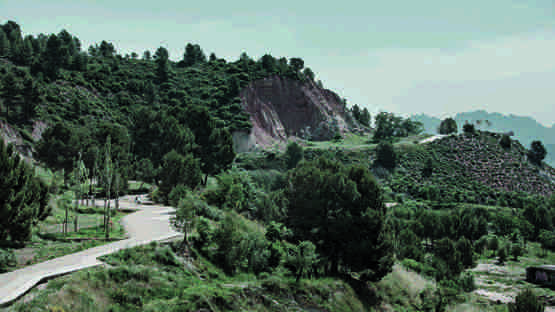 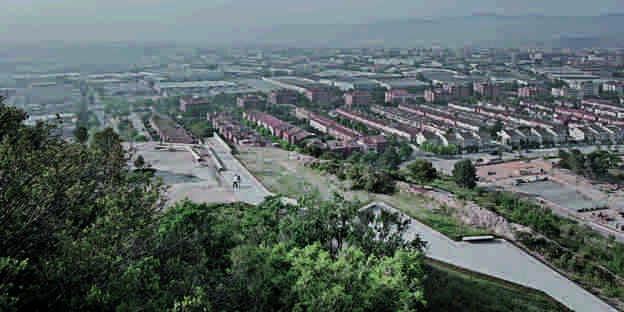 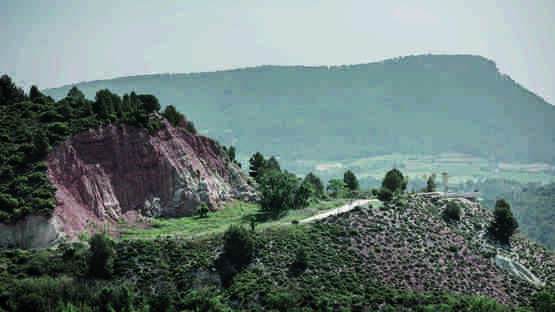 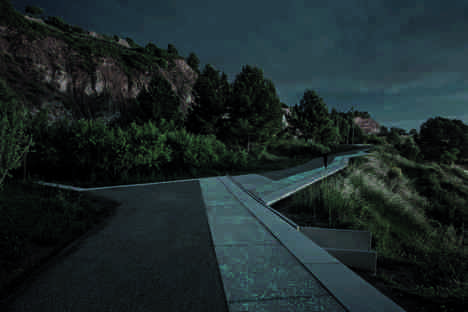 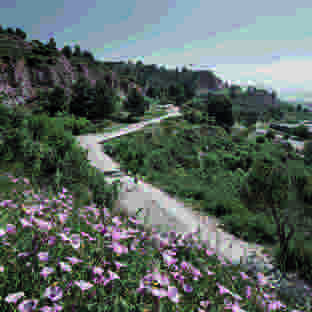 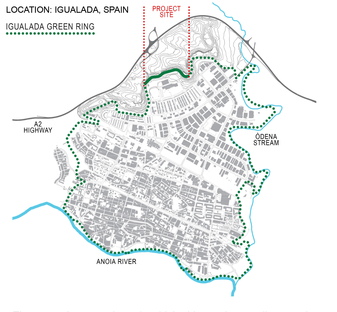 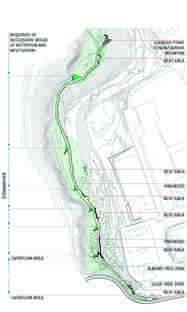 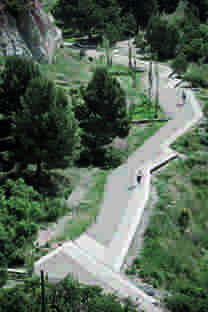 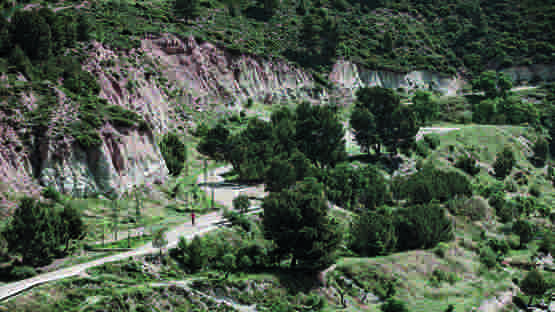 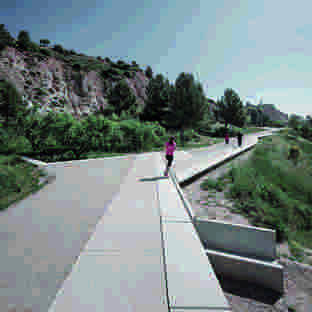 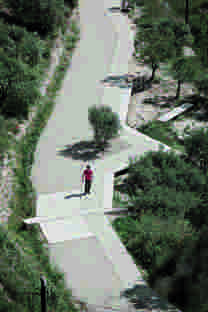 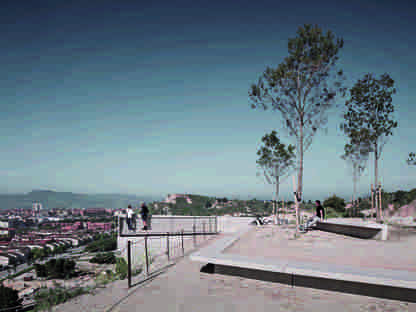 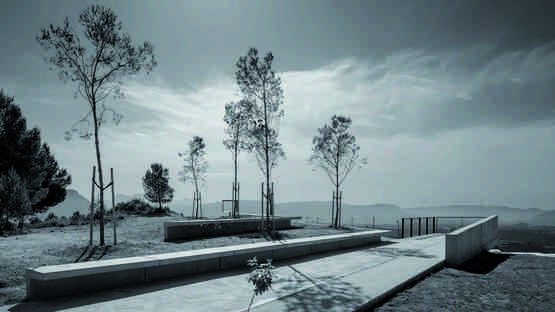 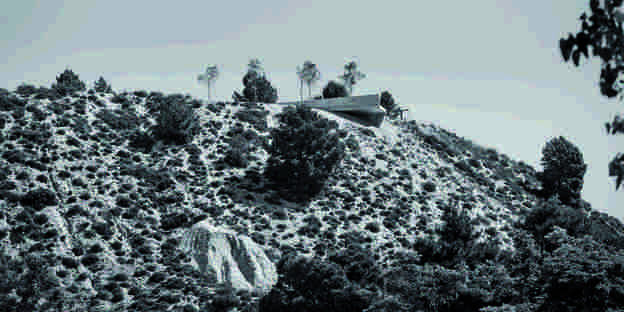 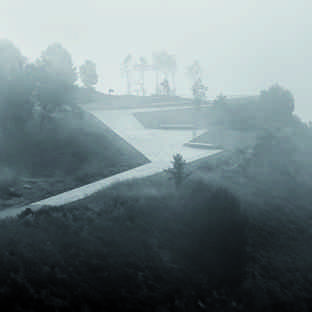 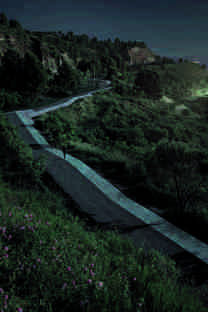 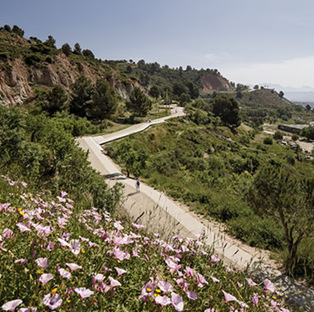 A bike path by Batlle i Roig