A 30-metre-long wooden construction winding between the trees and the natural setting: Community Landscape is a huge grandstand and the biggest art installation in the city of Tromsø. Commissioned by the municipality and designed by Bjørnådal Arkitektstudio, the artwork becomes a part of the natural landscape and a meeting-point for the community. 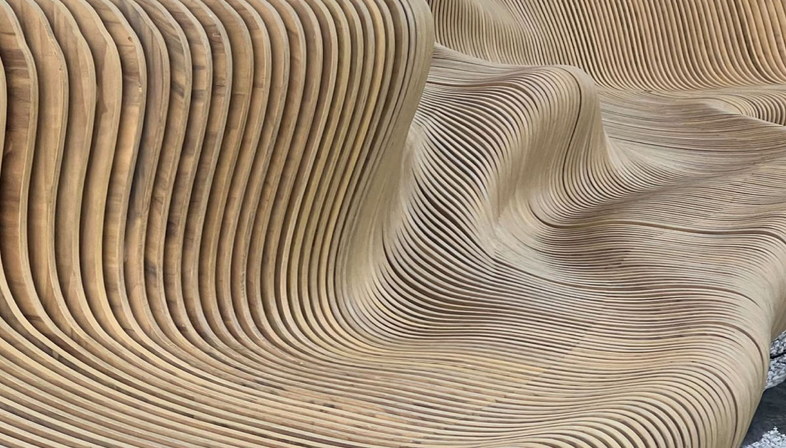 The city of Tromsø, located north of the Arctic Circle in Norway, is one of the best places to see the spectacular northern lights. With a population of over 70,000, it is the biggest city in Northern Norway and has been home to the world’s northernmost university since 1963. Built on two islands as well as the mainland, Tromsø is also known as the "Port of the Arctic Ocean“, and since 1874 it has been the point of departure for numerous expeditions, including the North Pole expeditions led by Roald Amundsen and Fridtjof Nansen. The city’s spectacular natural setting is underlined by Bjørnådal Arkitektstudio’s 30-metre-long construction offering an amazing view of the mountains around the Arctic city.
But Hans-Petter Bjørnådal’s project is more than a public artwork in its own right, more than the biggest art installation in Tromsø and most likely one of the biggest in Norway, more than a viewpoint over the natural landscape. The construction’s true purpose is suggested by the title of this public artwork commissioned by the Arctic city: Community Landscape.
The oversized bench by Grønnåsen school is intended to be a community meeting-place. „Because the art and architecture that really mean something to people are the ones they come into contact with every day,“ explain the architects of Bjørnådal in their press release. „Here, on the bench, students can relax with a view of the basketball court, and after school, all the people in the neighbourhood can find a place to sit with other people, or just enjoy the view.“
The structure is made of Duraply, a wooden material designed for intense outdoor use. The studio’s founder Hans-Petter Bjørnådal, who has always had a strong focus on sustainability, wishes to demonstrate how a natural, renewable material such as wood can be used in exciting new ways, in this case with the aid of parametric design. He explains that „using this technique, we can freely model and create organic shapes in a standardised way. Instead of traditional methods, we use printers and milling machines to create unique shapes. And as this is an art project, we can further expand on these forms.“
Speaking of forms, it is clearly evident how the Community Landscape naturally becomes a part of the neighbourhood and its environment, as a result of the grandstand’s position on the site, which is designed to ensure that the installation becomes a part of its natural surroundings. Bjørnådal sees the city’s demands as a great source of satisfaction, demonstrating that „the municipality understands the importance of the environment for people who live in the town.“ As an architect, he realises full well that „our surroundings influence us more than we think.“ This is why creating something beautiful is an act of public good, giving new meaning to the phrase „combining the useful with the enjoyable“. 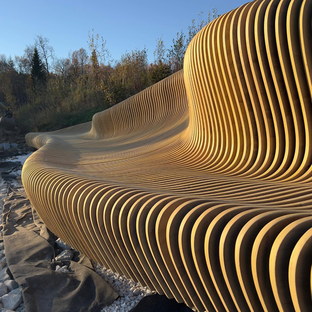 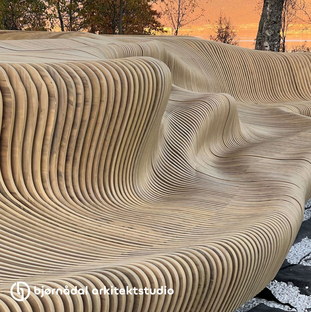 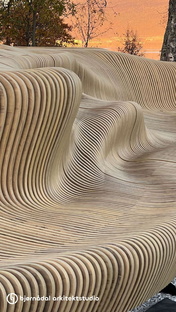 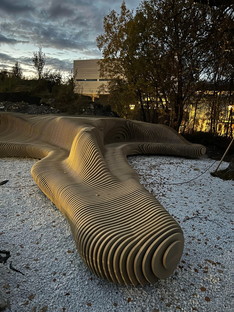 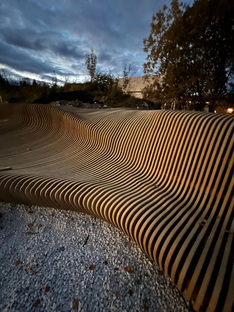 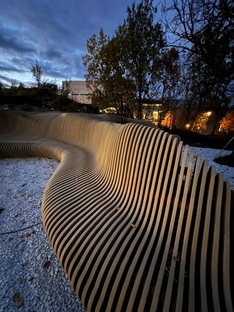