The Chinese architecture firm Wutopia Lab has crafted an aluminium mountain in Luofu, Canton. This intriguing architecture is the showroom of the Industrial Park of Traditional Chinese Medicine, and it bounces off the power and the spirit of the local landscape. 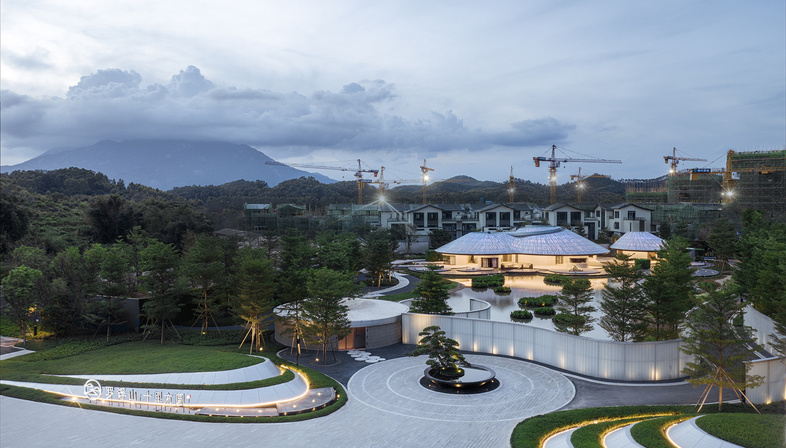 The mountainous zone of Luofu, located in Huizhou, Guangdong province, China, is formed of Mount Luo and Mount Fu. The area is full of environmental tourist attractions, including innumerable waterfalls and dramatic rock formations. It is also a sacred place for Taoists, where the immortals live and improve their theurgy.
To this day we can still find a lot of architecture associated with Taoism, which is why Wutopia Lab’s project for the exhibition showroom for the Industrial Park of Traditional Chinese Medicine commissioned by Ping An Real Estate and Guangzhou Fangyuan Group is based on the history and spirit of the place, all striving for the utmost harmony with the natural landscape, which is the focal point of the architectural project. The unusual concept of a mountain shape for the centre, as the architects say, was inspired by their first visit to the site, and their view of Mount Luofu. It was raining heavily, but then the top of the mountain suddenly appeared as if it were floating above the fog, an image that the design team reproduced in the new centre, designed as the third mountain in the natural context.
Visitors arrive at a round reception area and from there travel to the main building by boat, passing alongside round, green-covered islands. Platforms with water features and artificial fog turn the journey into an intense experience. It’s like going on an adventure tour that continues inside the volume. The spaces are dominated by a white and grey colour palette that echoes the shades of the mountain range as well as providing a neutral backdrop for the display.
All the main functions were located in the basement to minimise the centre’s visual impact, with the visible part consisting of a large roof area with two “peaks”, appearing to float but actually sitting on six reinforced concrete columns. The spectacular, 11.9-metre high spiral staircase leading from the basement to the top of the building is instead an independent structure. It is the roof, clad in perforated aluminium panels, which gives the architecture its name and defines its relationship with the context. The use of different sized holes in the panels ensures that the base of this “aluminium mountain” looks thicker, gradually appearing to become lighter as it reaches the “peak”, and ultimately losing its marked materiality at night when it is lit from below and looks like an ethereal lamp hovering in the air.
The design team from Wutopia Lab intended to craft a centre to market the new estate, which aims to communicate both a sales message and the sense of a lifestyle that has been lost in the frenetic pace of everyday life. In an environment full of symbolism, in a space built using modern technology and that showcases traditional wisdom, we should feel happy. The idea behind this new architecture - the third mountain - is to lead us to a better life, becoming a celestial palace of our times, according to the local traditions. 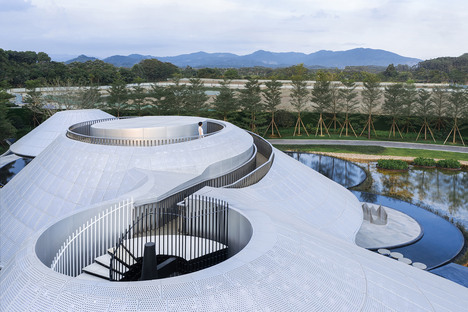 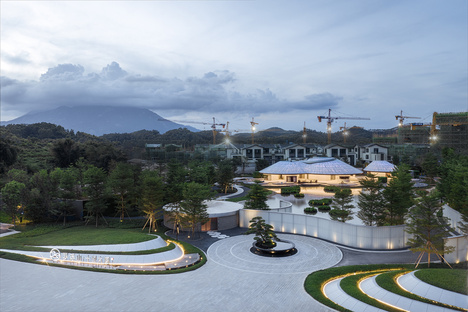 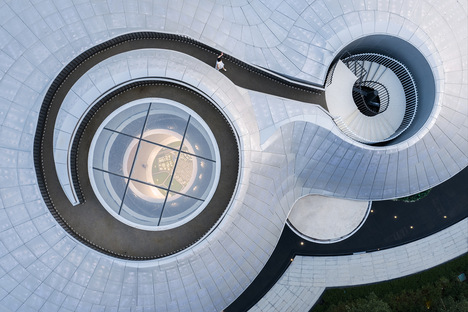 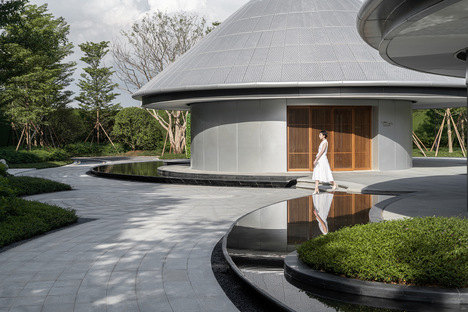 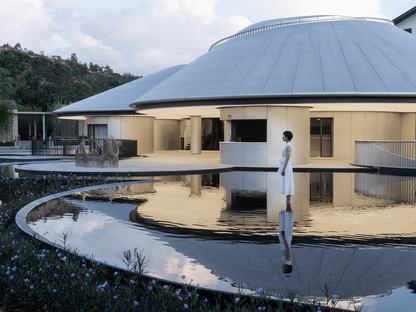 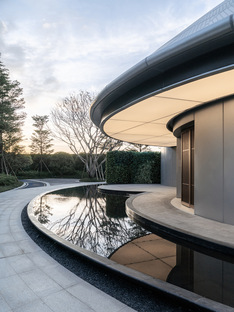 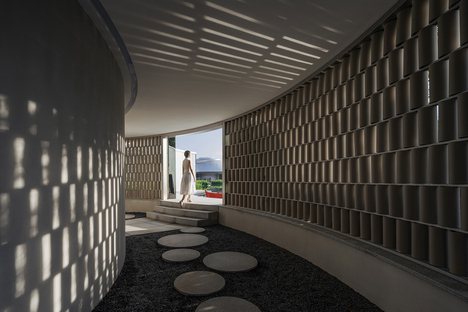 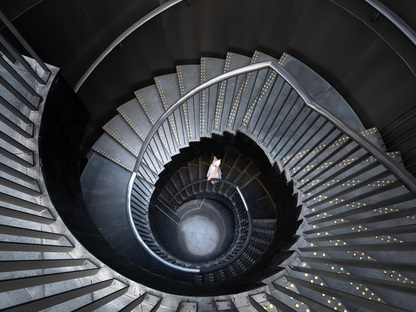 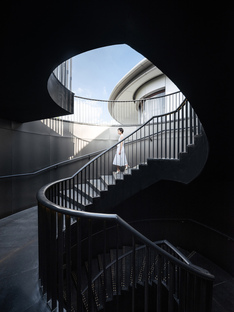 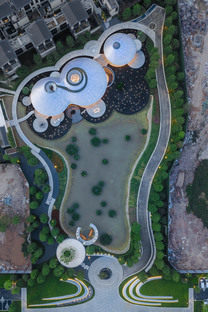 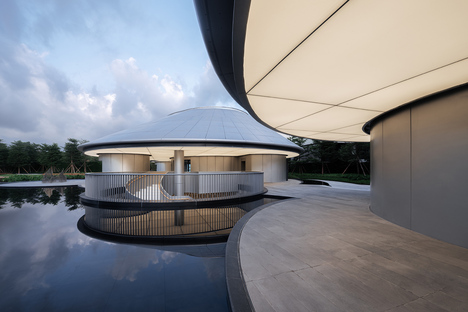 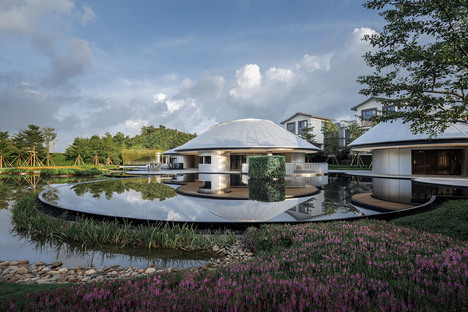 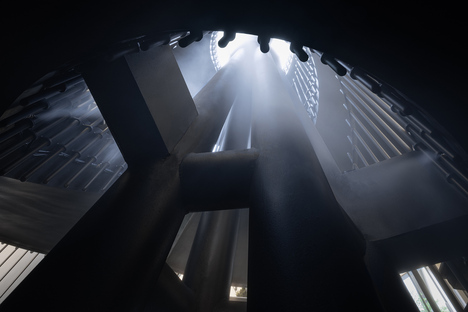 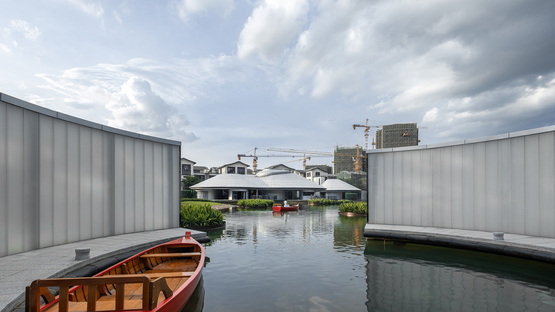 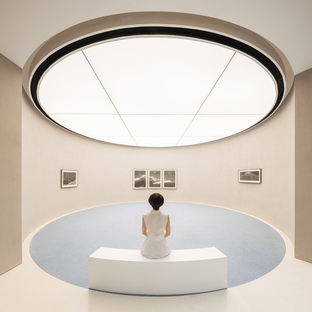 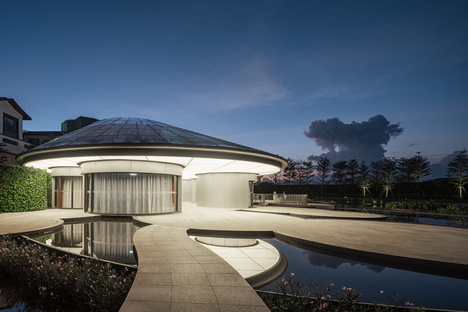 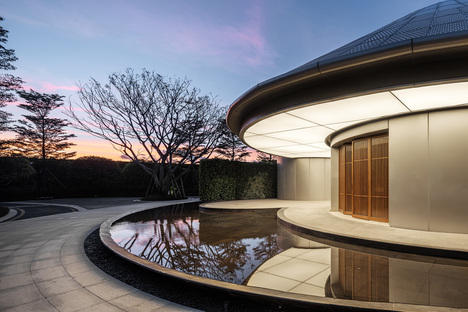 Family life and memories, a home in Shantou, China