Barkow Leibinger has designed a new apartment house in Berlin’s Prenzlauer Berg district, on the site of a building that was demolished during the war. With a double skin of brick and a sloped roof, the Apartment House fits in while standing out from its surroundings. Barkow Leibinger’s Apartment House in Prenzlauer Berg, a well-known and lively district in Berlin, is a building of great interest for its similarities and contrasts with its surroundings, the neighbouring buildings in the same complex. Barkow Leibinger, a studio based in Berlin with offices in New York, managed to reconcile the contrasting restrictions of conservation requirements and the current building code. As a heritage building, the new Apartment House completing the courtyard had to measure the same size as the demolished old building, even though it did not meet the requirements of today’s building code for the distance between buildings. A compromise was reached by building the eaves only 7 and a half metres above the ground, which means, in a building measuring about 18 metres, that the roof ends up being taller than the volume it covers. The base of the building is on two different levels, while the roof contains four, with an inclination of about 70° which makes the space perfectly usable. Its importance is considerable, and its form is appropriate for this: a truncated pyramid rising above a cube and ending in a panoramic terrace. A house like the archetypal house in children’s drawings, as the architects themselves describe it.
Between the apartment house and the end wall of the building to the south next to it, a fire wall creates an obvious seam joining the building to its neighbours while at the same time underlining its differences from them. While it stands out with its atypical volume, the building does everything it can to blend in and avoid interrupting the harmony of the pre-war buildings. Barkow Leibinger conducted a study of the colour range of the plaster on the surrounding buildings in order to come up with the colours used on the brick skin of the new building. Twenty thousand bricks in colours ranging from white to yellow, from orange to brown, and from pink to grey cover the structure on its three free sides and help it blend into its surroundings.
The building attempts to blend in even while standing out from its surroundings, maintaining an enviable formal equilibrium. Flush-mounted aluminium window frames contrast with the warm hues of brick and acknowledge the neighbourhood’s historic heritage of industrial architecture. They are irregular in shape: the windows nearest the old buildings are inspired by the proportions of their vertically oriented windows, while farther away the windows widen out to become square, and the top windows are rectangular and horizontally oriented. The third level of windows is exactly at eave height, coinciding with the row of cornices on the building next door.
The building’s formal uniqueness permitted design of two large interiors: a 200 sqm apartment with a ground-floor living area opening onto a private garden and three bedrooms with bathrooms on the first floor; and a second apartment on four levels, decreasing in size from the third to the fifth floor and culminating in a panoramic terrace. Here, the steep slope of the roof ensures that all the available floor space is usable, and the skylights offer an unusual perspective over the surrounding area. Whether seen as extraneous or familiar, this modern block forms the focus of attention in the courtyard, not only because of its evident formal unbalance, which becomes an aesthetic choice, but because of the great care that went into the choice of brick cladding. 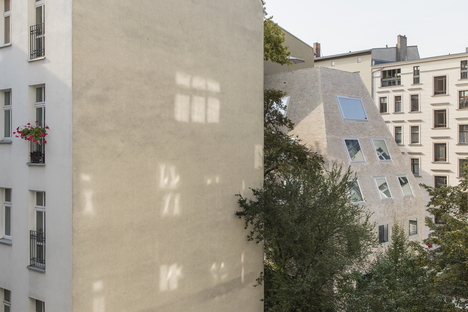 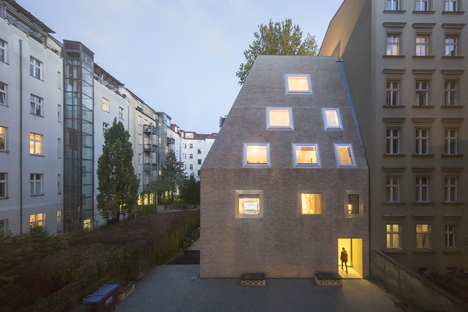 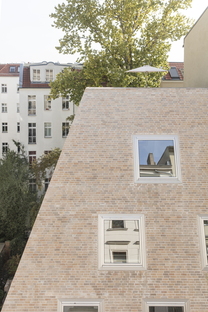 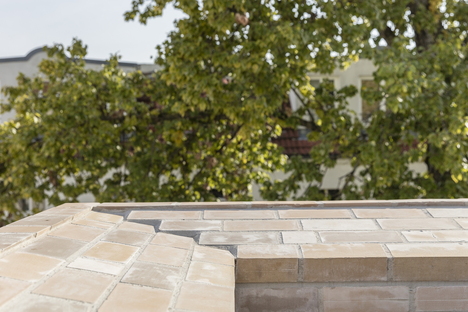 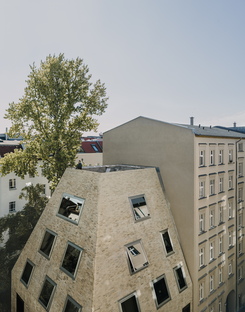 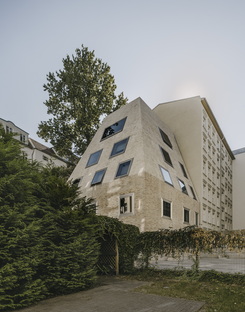 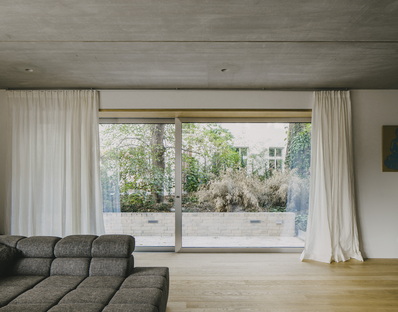 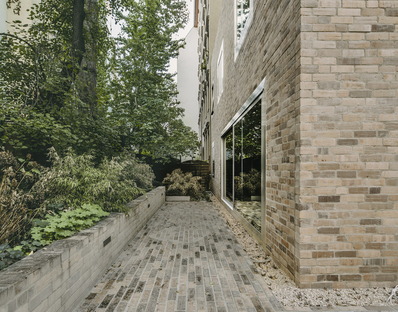 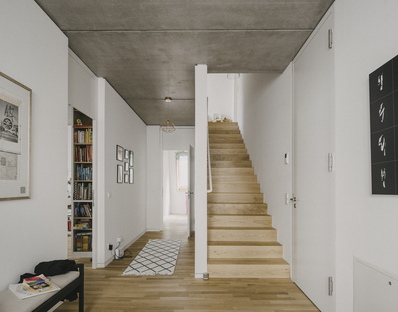 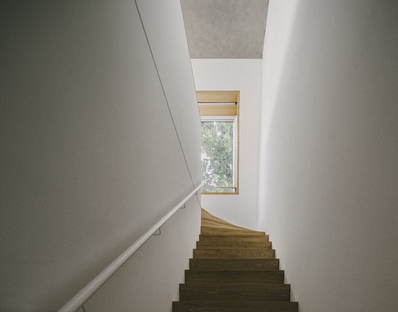 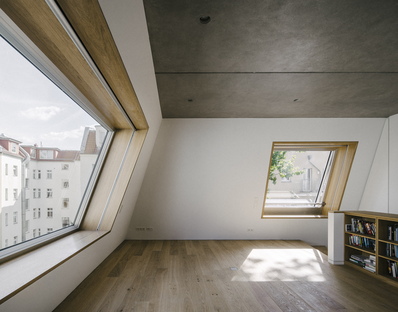 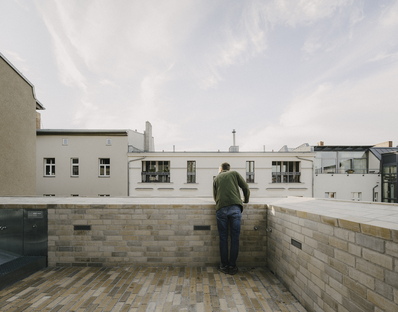 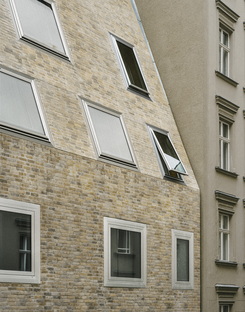 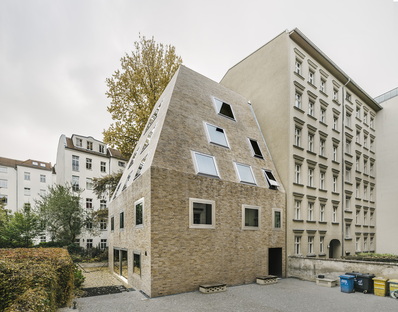 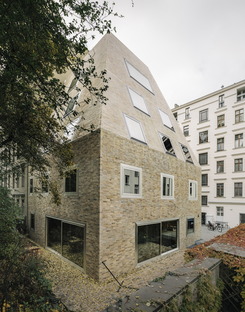 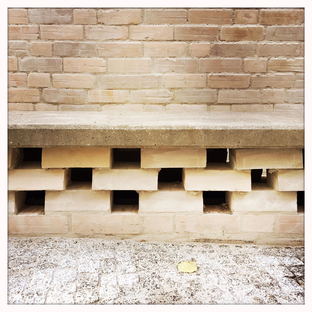 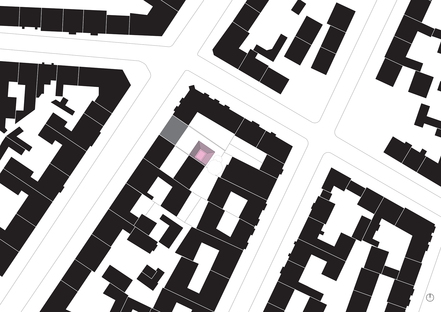 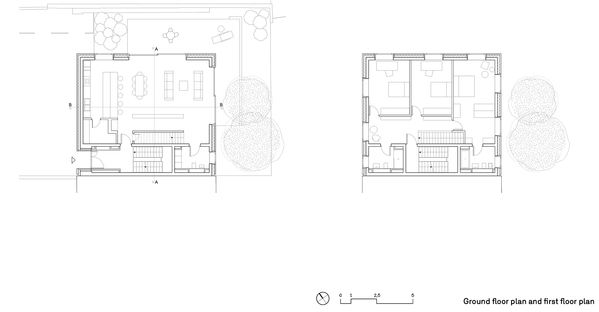 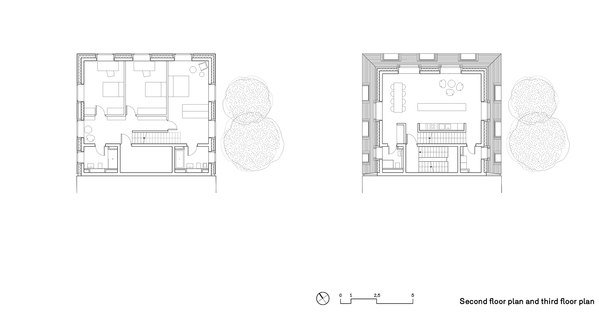 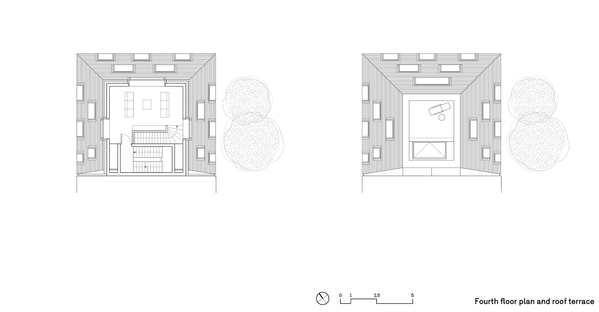 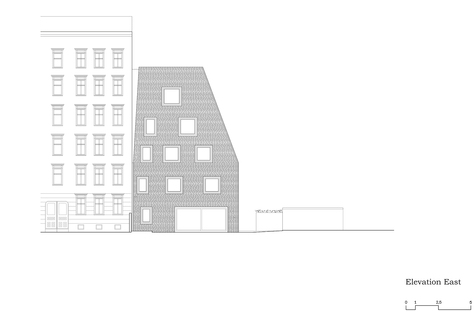 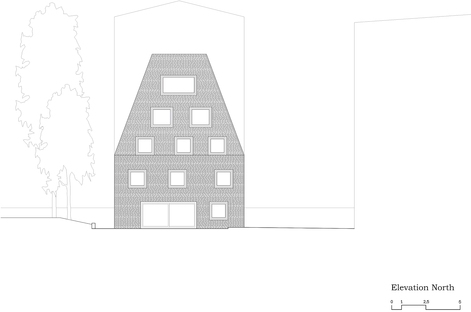 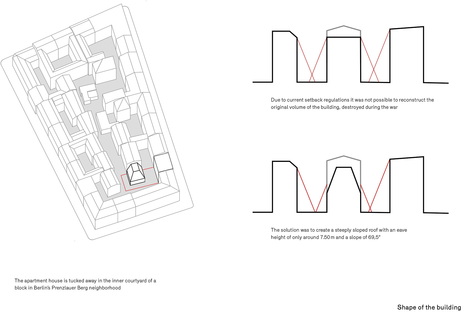 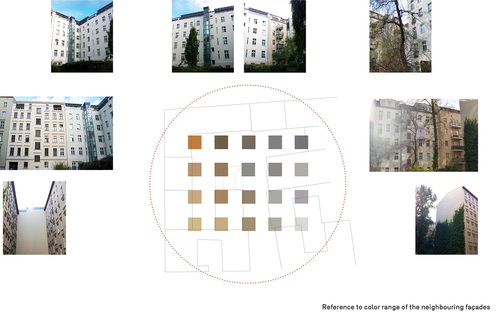 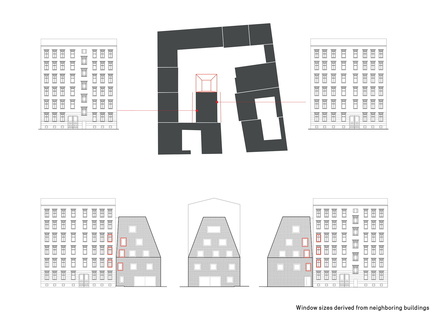