InSpace puts Boulevard de la Villette in Paris back together with a social housing project inspired by the façades of the neighbourhood, built in the style of the Haussmann renovation, and by Oscar Niemeyer’s Communist Party Headquarters. InSpace has designed 14 social housing units and offices for the Paris PMI family centre. 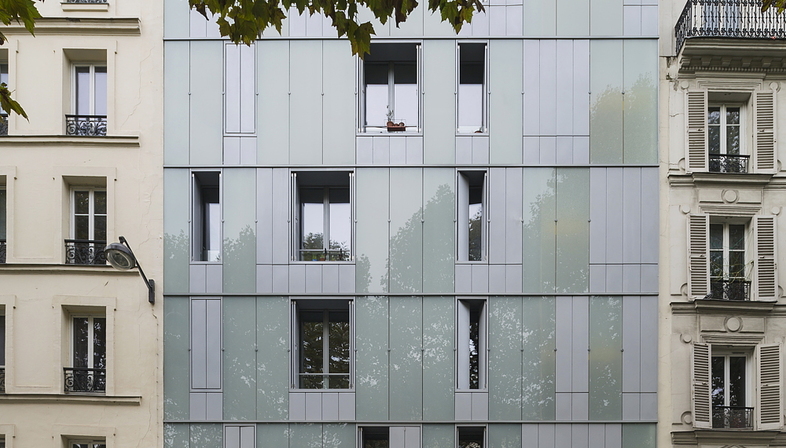 Having placed first in the public competition, InSpace of Marta Mendonça & Gonzalo Galindo designed 14 social housing units and a family centre at number 73 Boulevard de la Villette in Paris. The project was commissioned by SIEMP, a real estate company that builds and manages social housing in Paris, and incorporates new homes as well as offices and clinics for the PMI: the Centre de Protection Maternelle et Infantile in Paris.

The building’s unusual features, such as the design of its façades and its layout, are the result of the inspiration the architects draw from the urban fabric of this suburban area, so that the building at no. 73 Boulevard de la Villette fits perfectly into and completes an uninterrupted street front in the style of the late 19th-century Haussmann renovation of Paris. On the lot, which is rectangular in shape, 11 metres wide and 29 metres deep, the building closes the wall on the street, occupying a volume similar to that of the constructions on either side of it, and then unexpectedly opens up at the back onto a treed courtyard facing south, so that the homes on all 7 levels enjoy plenty of sunshine and light. The courtyard, formed by two patios, visually separates the main body, a multi-storey tower overlooking Boulevard de la Villette, from a smaller secondary building with only two floors. The ground floor embraces both buildings in a single construction with a dual soul: one imitates the canons of the façade on the access road, with variations, using glass and metal as covering materials; while the other overlooks the garden, with a wooden façade recalling the hues of green appearing in the complex. The compact northeast wall redraws the lines of the stringcourse on the balconies of the adjacent buildings and the vertical lines of the 19th century windows, using glass panels with openings set into them.

The regular grid of the Haussmann-era façades is interrupted here and there, with a varied rhythm creating anomalies in the architectural system to give the project a contemporary look. In 1971 Oscar Niemeyer build the headquarters of the Communist Party in Place du Colonel Fabien, where the boulevard ends: a concrete and glass building with a continuous façade that cannot be ignored in this setting. The southern façade contrasts with the building’s apparent impenetrability, which cuts out the noise and city traffic of Boulevard de la Villette; it is completely covered with wooden panels, interrupted here and there by openings and by glass, covering the ground floor surfaces. While the upper levels contain social housing units, the lower level is occupied by the Paris PMI, a state-run organisation that provides various forms of support for families in difficulty. The reception area is located at the entrance on Boulevard de la Villette, while the waiting room and service areas are arranged around the first patio. The offices and clinic are located at the end of the lot, so that they benefit from plenty of natural light and all the required privacy. The internal volume on two levels has a green roof which gives even the residential units at the highest levels a domestic feel, in which the city is left outside and has no influence. 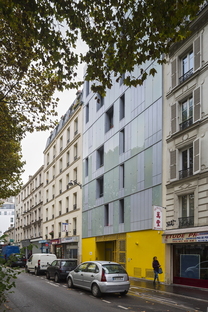 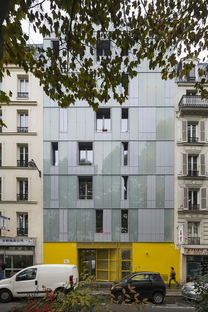 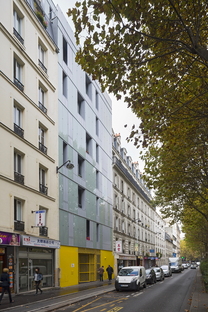 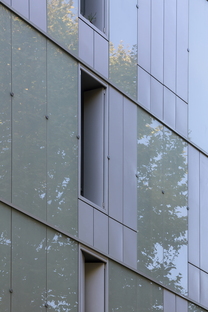 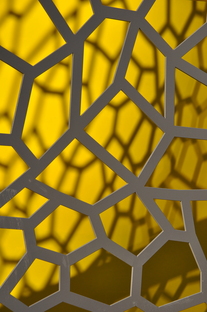 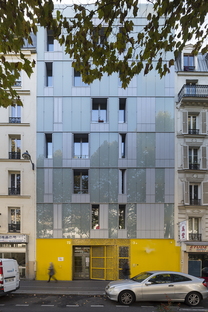 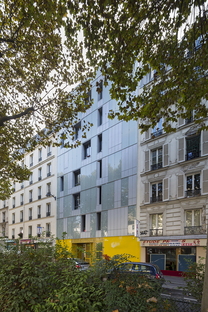 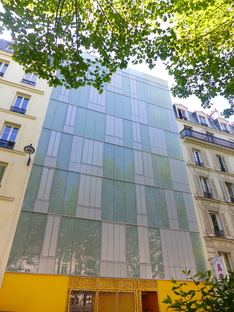 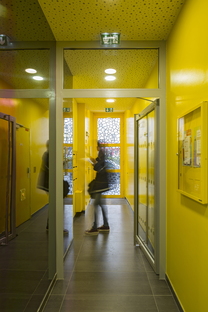