The best new building in the United Kingdom is Foster + Partners’ Bloomberg project, winner of the 2018 RIBA Stirling Prize, announced on the evening of October 10. 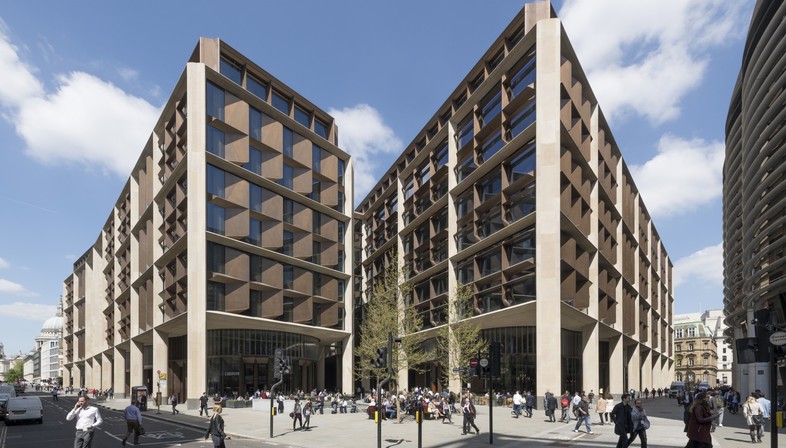 Foster + Partners have won the 2018 RIBA Stirling Prize, the most prestigious award for architecture in the United Kingdom, with their plans for the new European headquarters of the multinational company Bloomberg.
The announcement was made during an awards ceremony held at The Roundhouse Venue in London on October 10. RIBA president Ben Derbyshire said that the jury came to a unanimous decision to choose Bloomberg’s new European headquarters following a vigorous debate. He added that “the creativity and tenacity of Foster + Partners and the patronage of Bloomberg have not just raised the bar for office design and city planning, but smashed the ceiling.”. This is the third time Norman Foster’s studio has won the RIBA Stirling Prize, presented to the Imperial War Museum, Duxford in 1998 and 30 St Mary Axe (known as The Gherkin) in London in 2004.
Ben Derbyshire’s enthusiasm is justified not only by the fact that the new Bloomberg headquarters are accredited as the world’s most sustainable office building, having achieved the maximum possible score in British BREEAM certification, but also by the reclamation and restoration of important archaeological artefacts. The project uncovers and makes visible the route of an ancient Roman road under the site and incorporates a museum exhibiting the ruins of an ancient Roman temple. The Bloomberg complex covered with sandstone cladding is also London’s second-largest stone building, after St Paul’s Cathedral. 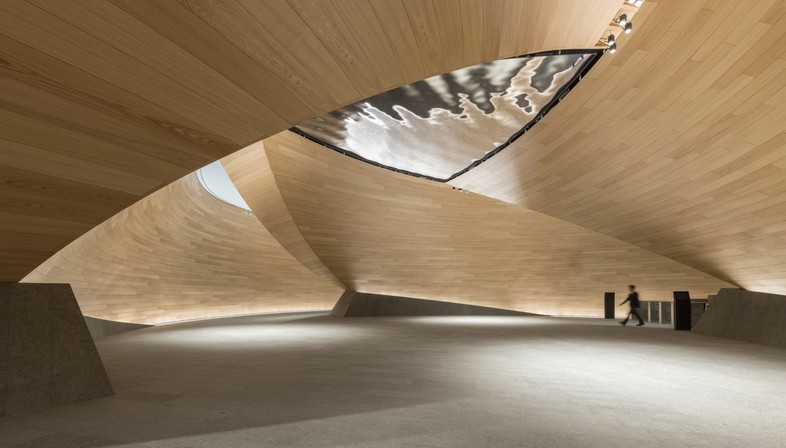 The multinational’s new headquarters occupy a whole block in the City on the site where a Roman Temple of Mithras was discovered about sixty years ago. Foster+Partners’ project takes the archaeological artefacts into account: the architects designed two buildings linked by a bridge, each of which stands on one side of the new public arcade, a complex layout permitting recovery of the route of the ancient Roman road. Three new public spaces form a part of the plan for the new Bloomberg headquarters: a new entrance to the underground station, a shopping gallery with bars and restaurants, and a museum exhibiting the ruins of the Roman temple. 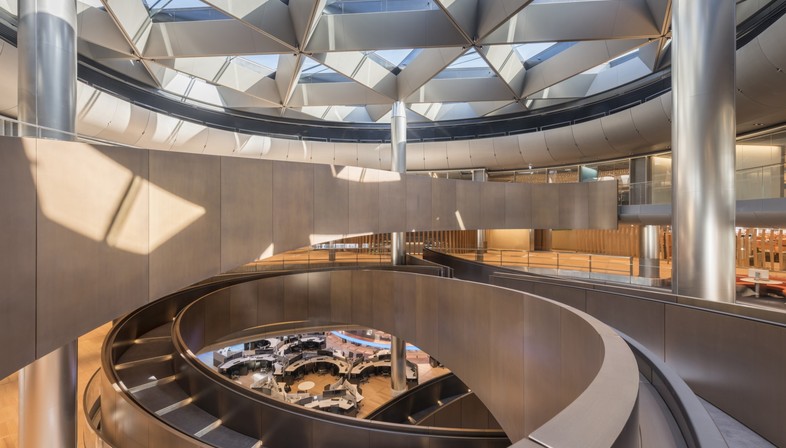 Unlike its sombre, monumental sandstone exterior with bronze wings on the windows, the inside of the building is very dynamic. The building’s choreographic layout is accessed via the “Vortex”, a work of art two floors high made up of three curved wooden shells. High-speed lifts take visitors to a sixth-floor panoramic foyer and café with views over the City. A bronze ramp winds down from there to the office levels below. The aluminium “petals” on the ceiling regulate the acoustics, temperature and light of the open-plan workspaces below. 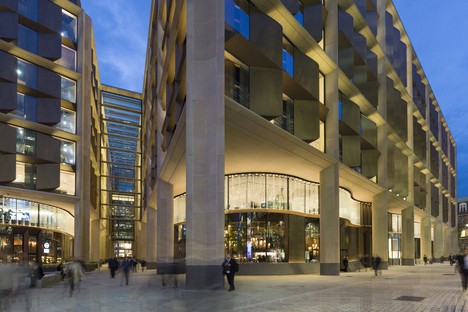 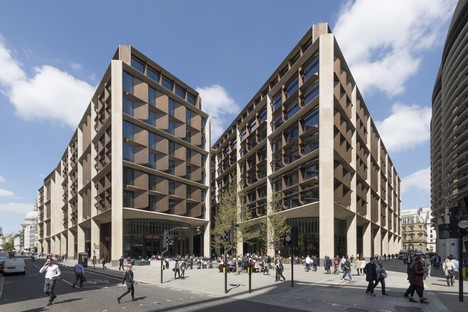 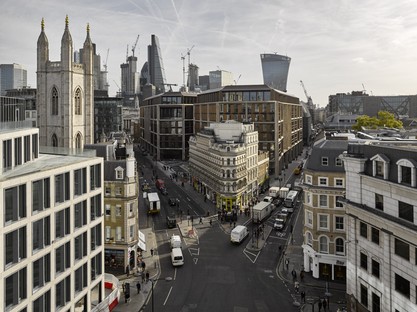 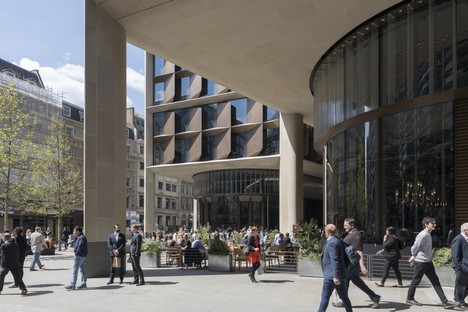 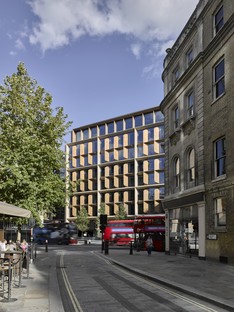 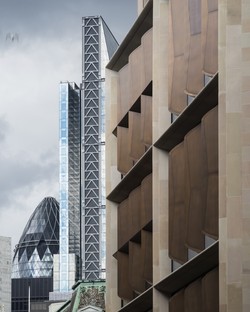 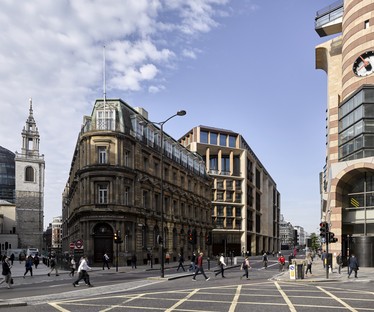 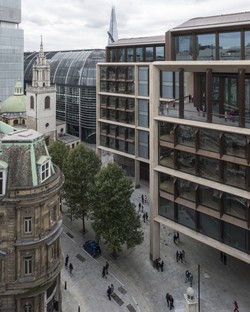 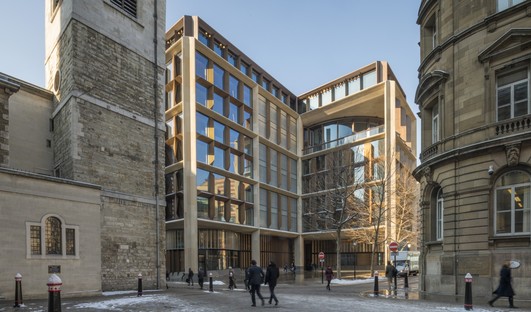 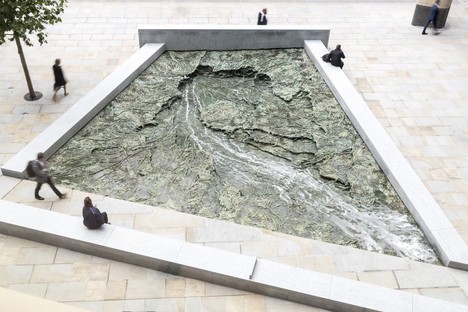 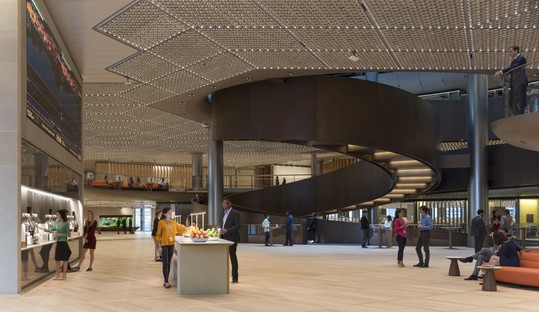 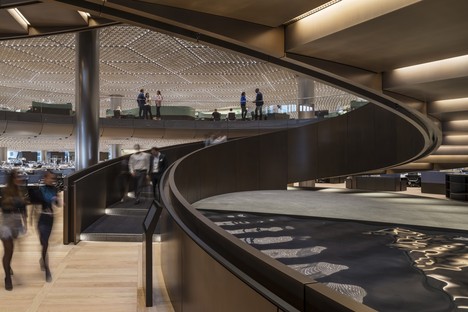 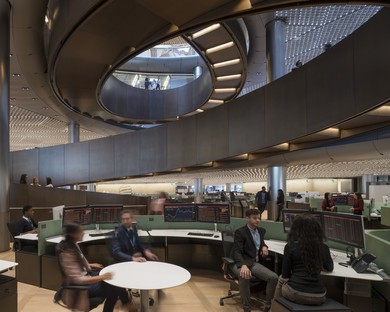 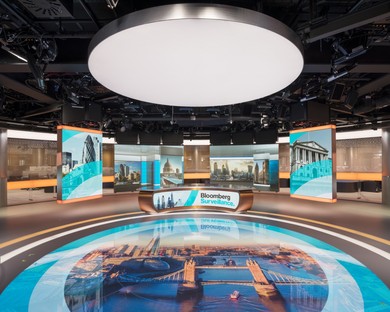 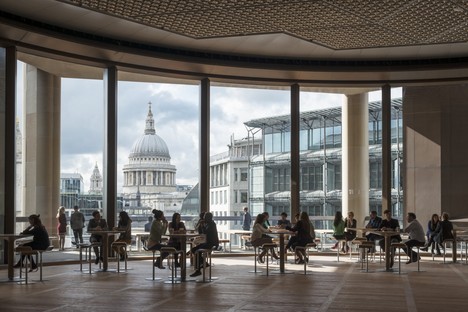 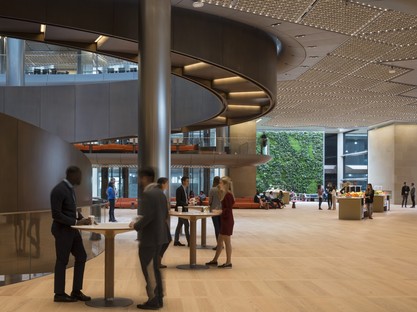 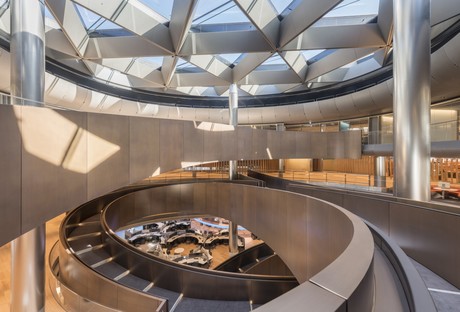 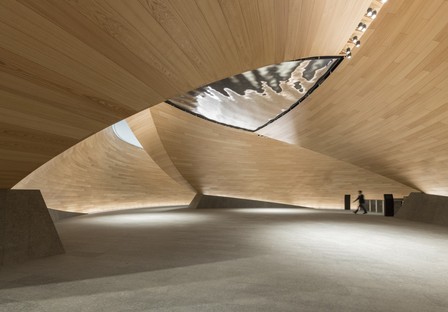 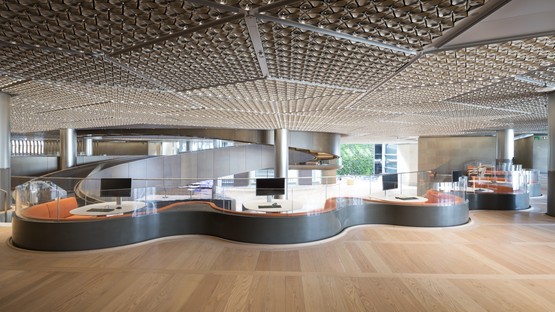 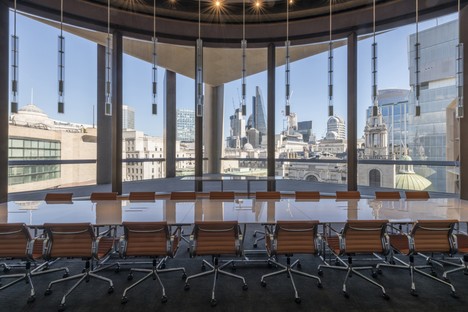