Italian studio Westway Architects has completed work on the Santa Margherita winery in Fossalta di Portogruaro, a project begun in 2008 and completed ten years later with a new bottling line that is part of a masterplan inspired by the concept of a small village. 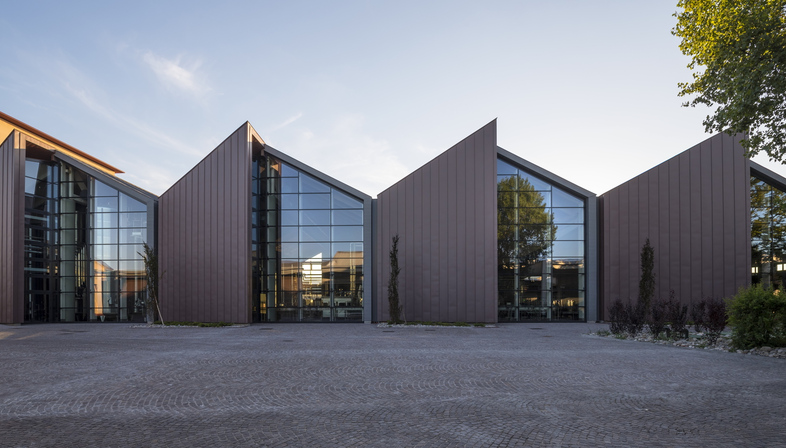 The prestigious history of Cantina Santa Margherita is back in the public eye thanks to the decision to aesthetically and functionally redevelop the principal productive facilities in Fossalta di Portogruaro, with a project awarded to Westway Architects of Italy that began in 2008.
It took about a decade of work to bring to light the value of the historic Santa Margherita winery complex, originally built in 1935, with new buildings and a restyling of the façades. Before the original winery was built, Count Gaetano Marzotto, heir to a dynasty of textiles entrepreneurs with plants in Valdagno, in the province of Vicenza, realised that the vast marshy plain between Fossalta di Portogruaro and the Venetian lagoon had great agricultural potential and set out to have it drained. A thousand hectares of fertile land were brought under cultivation, responding to the growing demand for food in Italy at those years of growing industrialisation and early urbanisation. Naming the estate after his beloved wife, Margherita Lampertico Marzotto, the Count decided to plant it with traditional grapevines, marking an economic turning point. At the end of the war he decided to focus on making quality wine, a decision which was to pay off over the years. The estate expanded beyond the confines of Fossalta, planting Pinot Grigio for making white wine in Alto Adige. His great success first in Italy and then abroad has made Marzotto a world-renowned name, associated with constant advancement and experimentation in production.
The need to keep up with the state of the art in the plants and renew the winery’s premises in Villanova, a small hamlet in the municipality of Fossalta, also demanded restyling and control of the building’s impact on the landscape. The company commissioned Westway Architects to work on the project in 2008, and they carried out the project in stages, beginning with redevelopment of the storage areas, and then the wine-making area, followed by the winery and offices, concluding the plan in 2017 with the construction of a new bottling plant. The masterplan was inspired by the concept of the village, by the idea of founding a sort of new centre; a little city of wine on the western edge of the centre of Villanova Santa Margherita, built in the ’fifties by Count Marzotto in an example of a virtuous project combining production facilities with homes.
The new bottling and storage building stands in place of one of the old buildings from the ’30s, a succession of blocks with double-gabled roofs which were copied in the new project as an element distinguishing the new construction while at the same time providing a link with the history of the industrial site.
The plants inside the building are all contained in a single space with a glulam timber roof, offering a look that considerably mitigates the visual impact of the building as a whole. The western wall is in fact a succession of solids and hollows in which the solids are covered with rose-coloured zinc-titanium and the hollows are filled in with floor-to-ceiling glass. Materials are alternated by cutting each bay in half vertically. Here, the zinc-titanium wall is inclined slightly outwards to make room for the entrance halls and add dynamism to the façade.
Between the new bottling plant, with its iconic rose zinc-titanium and glass bays, and the winery pavilion is a sort of plaza forming the ideological centre of the little town, a centre with plenty of trees for receiving workers and customers and adding variety to the sequence of buildings. To the north, where the winery building slopes toward the new bottling plant, the architects have created a 110 metre platform roof with an accent on the connection between the two phases in production. The massive naked structure, painted white, is the symbolic gateway to a 3000 square metre yard for manoeuvring vehicles. The pillars are aligned with the existing trees, ideally continuing the urban path. 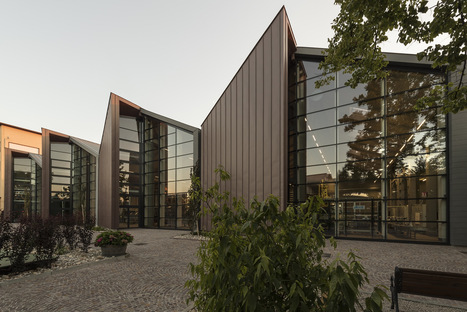 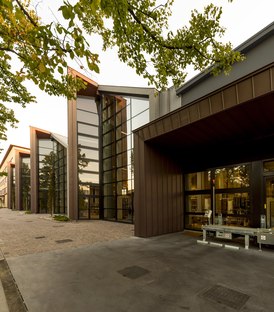 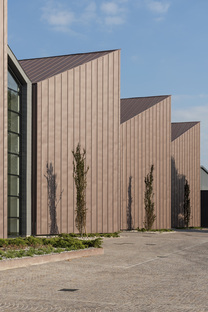 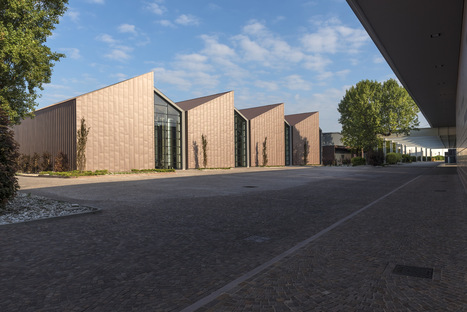 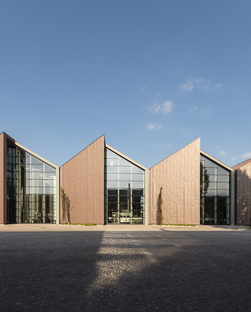 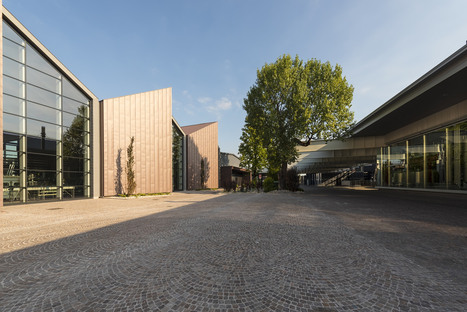 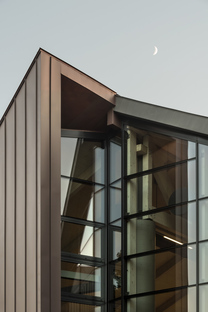 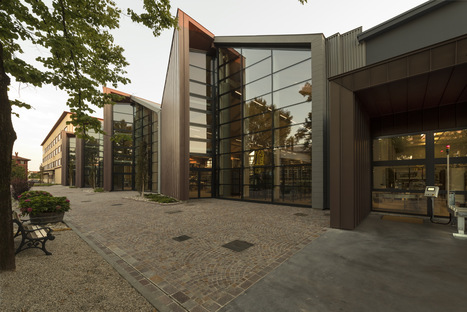 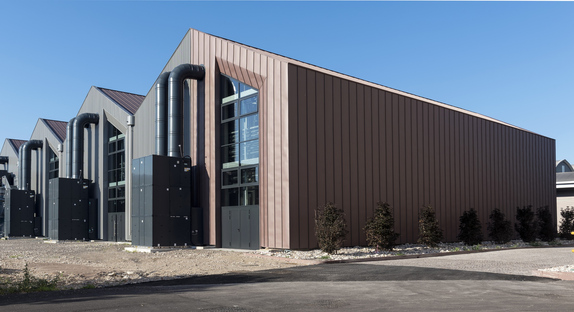 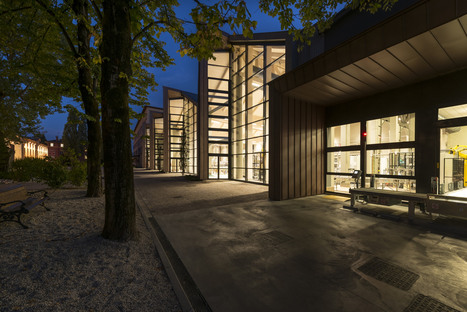 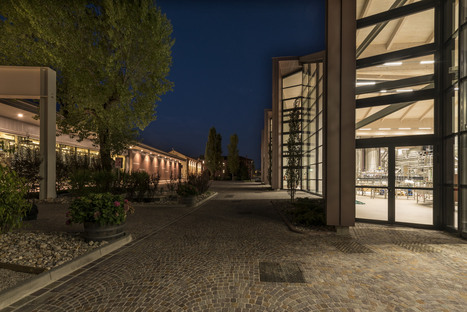 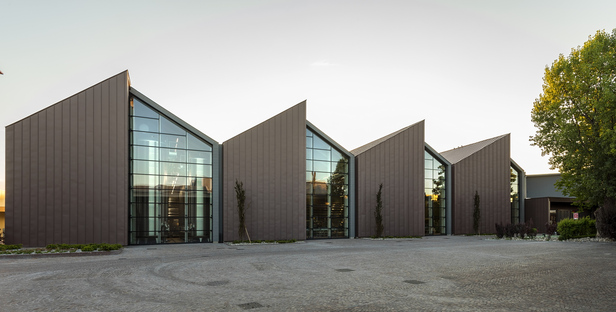 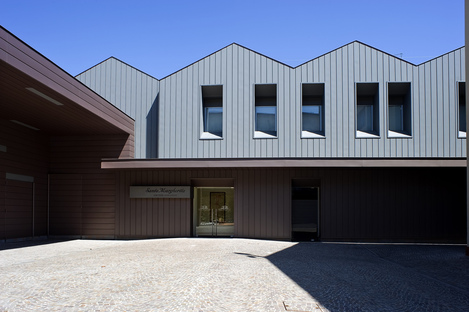 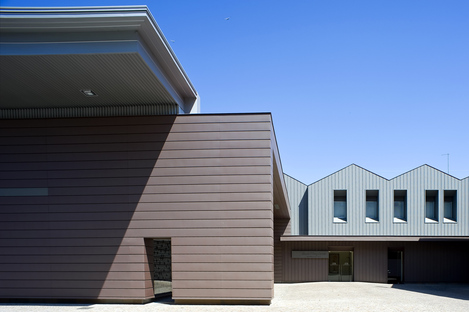 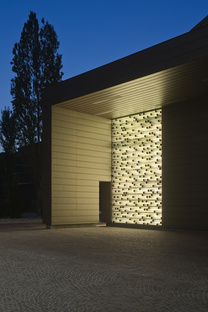 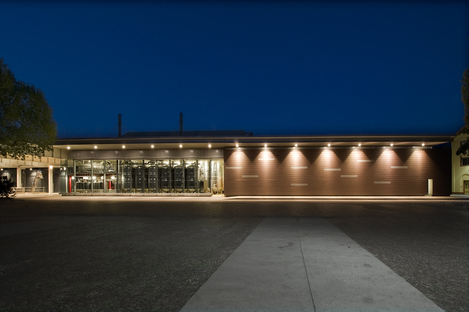 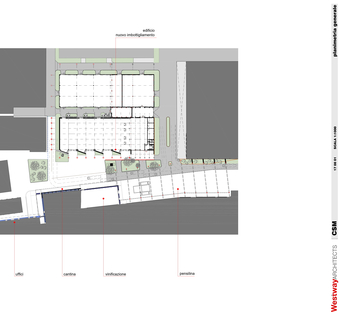 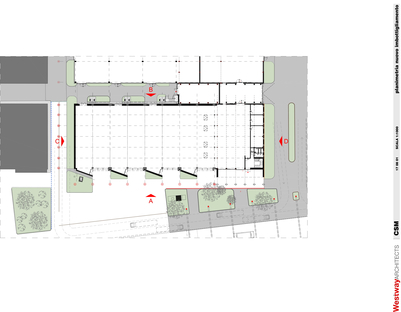 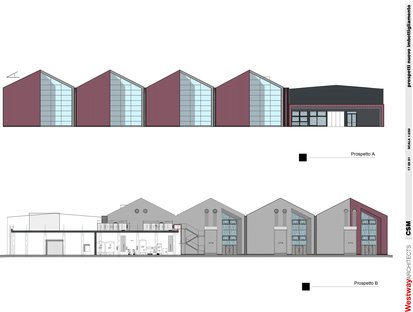 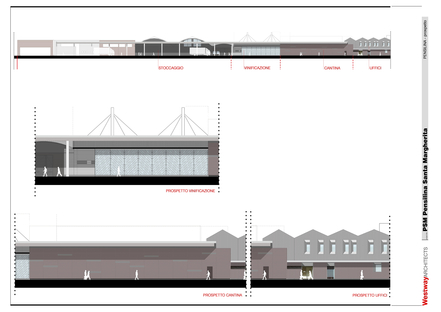 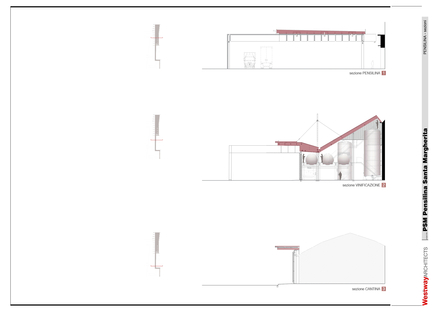 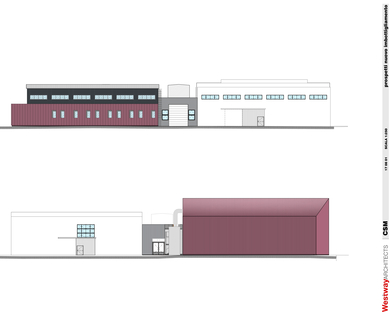 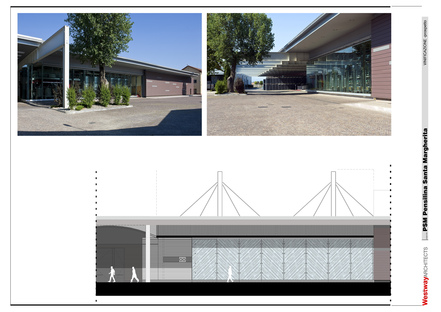