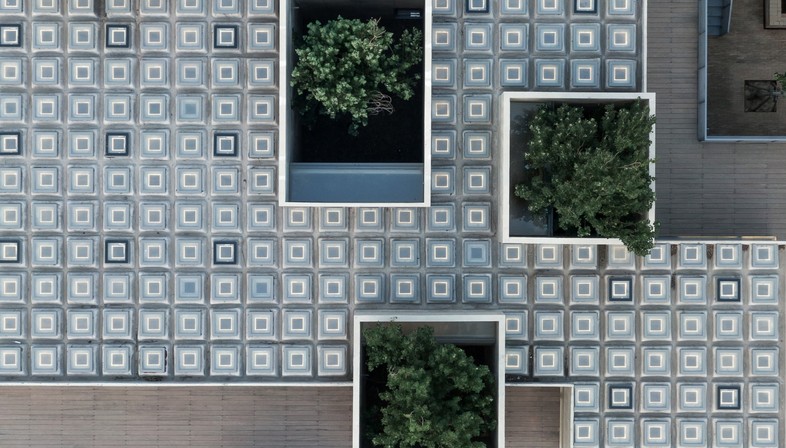 Vector Architects’ Restaurant y Sea is the last building in the real estate development commissioned by Beijing Rocfly Investment (Group) Co., LTD. nine years ago in Bohai Bay in China’s Beidaihe New District. The group asked Vector Architects to design a holiday housing development directly overlooking the beach. In addition to the homes, the Chinese studio’s masterplan included a series of entertainment services and facilities: the Seashore Chapel and the Seashore Library, a surprising concrete building anchored on Beidaihe beach like a solitary shipwreck washed up by the waves. We have already discussed this project, which won the Archmarathon award and has been much discussed in the world of architecture, in Floornature. Along with other cultural and recreational facilities, the development included construction of a restaurant, which was completed and opened at the end of 2018, and from which the Seashore Library and the sea may be seen in a single sweep of the eye.
The new restaurant included in the masterplan established a relationship with the library in terms of scale and building materials. In both cases, bare concrete provides the link between architecture and landscape: the bare, unfinished material does not claim any superiority of the artificial over the natural, but the artificial volume appears to be worked by time and the elements in its environment, the sea, the wind and the waves. The library, on the other hand, stands on the shore, proudly facing the sea like a bastion of civilisation, while the forms of the restaurant’s architecture attempt to blend in with nature.
Diners enter the restaurant via an entrance on a downhill slope, symbolically locating the level within a protected, partially concealed space. The contrast with the library is immediately obvious: while the library acts as an “observation tower” for looking out over infinity, and therefore does not want any obstacles before it, the restaurant is a homely “hearth” welcoming and comforting visitors. The level on which the restaurant effectively functions is made almost entirely out of glass, and many of the walls slide so that the structure seems to disappear. In contrast, the waffle roof, a concrete coffered ceiling, reveals its imposing thickness on the outside so that it seems to fluctuate over the inconsistent level of the interiors.
Observing the building in cross section, we may note that it is constructed on three levels which do not correspond to actual floors, but to three different material planes, each of which plays a different role in the composition. From a distance, the high foliage of the trees around them and those embraced by the building within its patios tower over the concrete plane, creating the illusion that a forest has grown on the roof. In actual fact the central part of the roof is a skylight consisting of numerous windows with a conical section which, thanks to the waffle beams, allow a delicate diffuse light to filter into the dining room. Around its perimeter, an open-air pathway allows guests to go up and admire the view, sitting in little raised terraces.
Inside, the beams in the Waffle system minimise the number of load-bearing walls, aligned with the patios (and in the service area to the north). These internal gardens which break through the roof and bring in direct sunlight are distributed in a spiral shape in the restaurant’s layout, serving the function of big pillars supporting the weight of the roof. Thanks to this, columns only 120 mm in diameter are sufficient to support the load of the eaves, slender steel columns like tree trunks which ideally blend in with them to make the garden into a forest.
The coffered ceiling, positioned above the line of the eaves, offers arriving visitors diffuse natural light with its impact on this large open space. The towering foliage, swaying in the sea breeze, casts its shadows on the skylights so that the light is constantly flickering, meaning that the light inside the restaurant is continually changing. The patios serve as stage sets, dividing and yet visually connecting the restaurant spaces. Consistently with this style, the floor plan is irregular, with covered parts radiating out toward the garden interrupted by the patios, as if it were a living and changing organism. 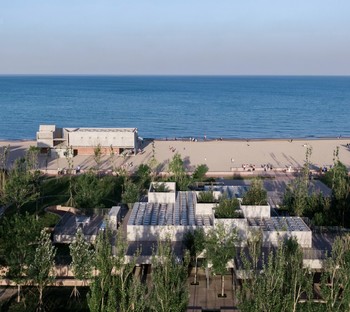 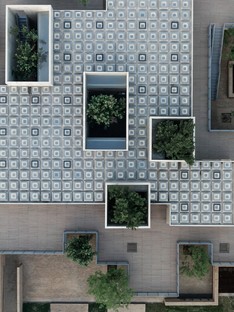 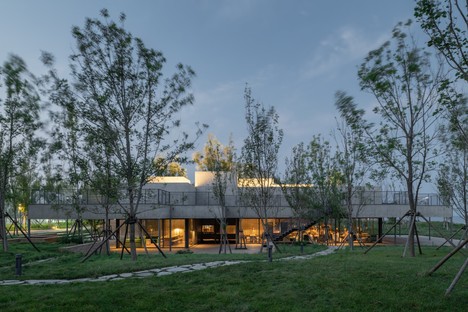 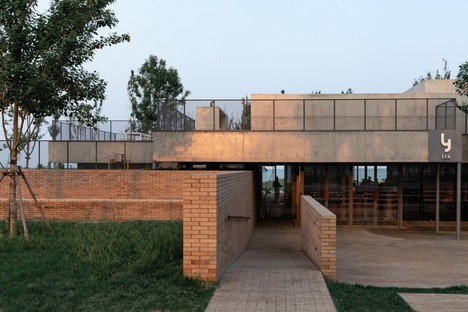 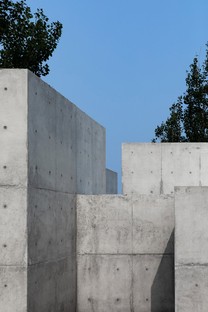 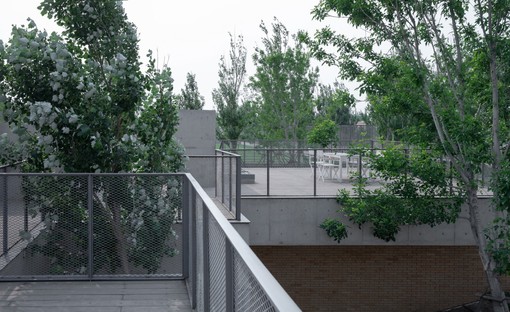 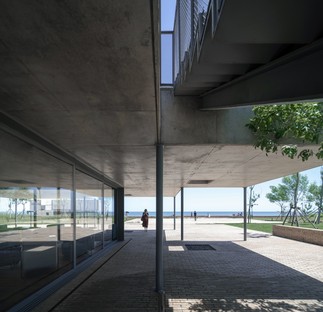 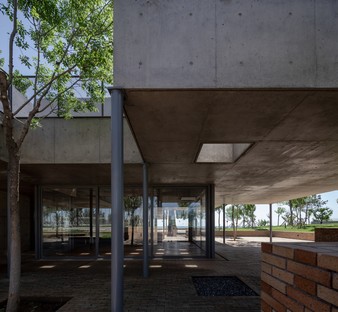 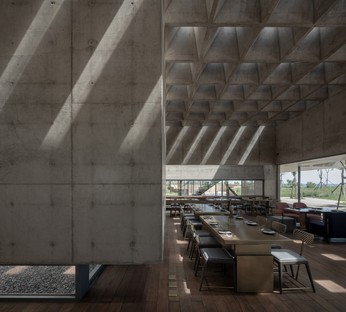 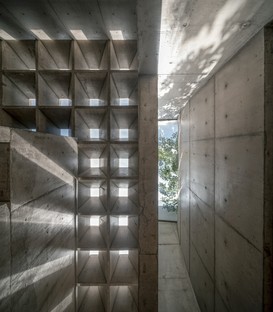 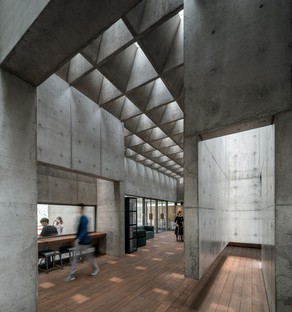 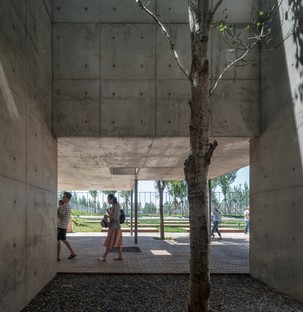 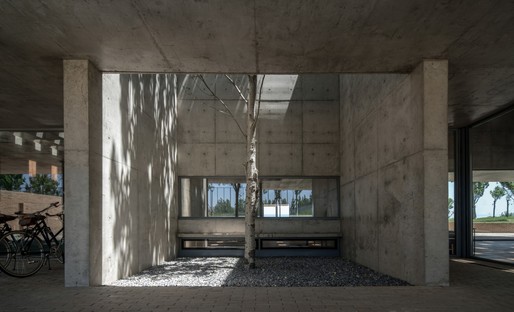 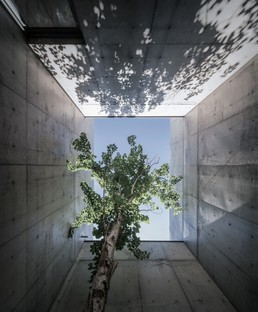 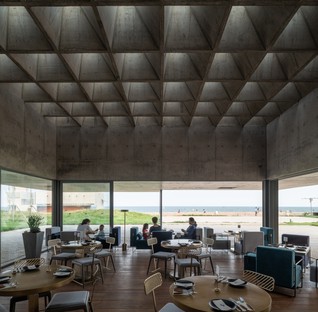 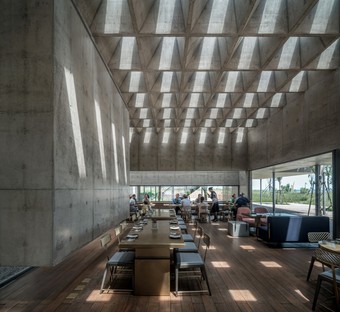 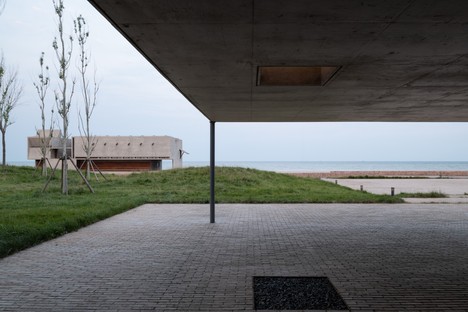 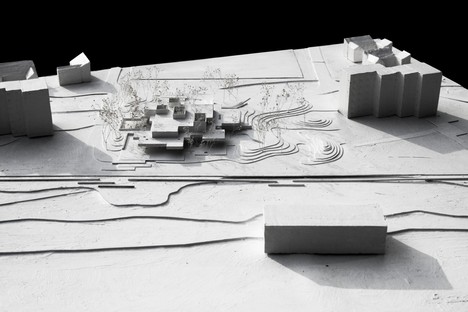 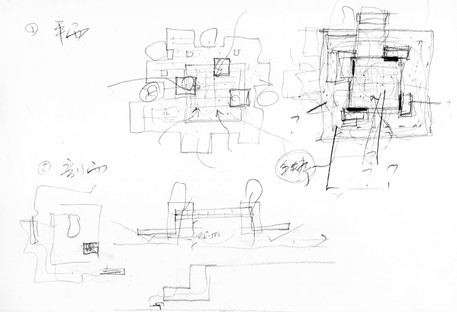 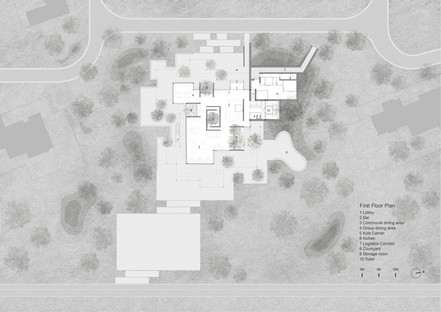 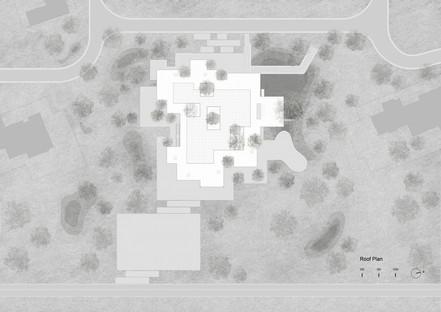 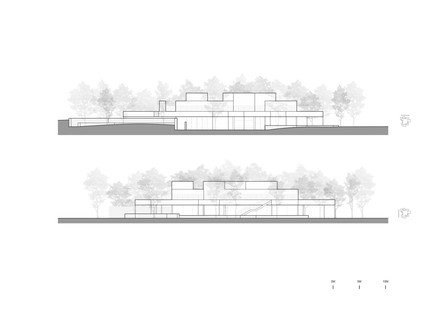 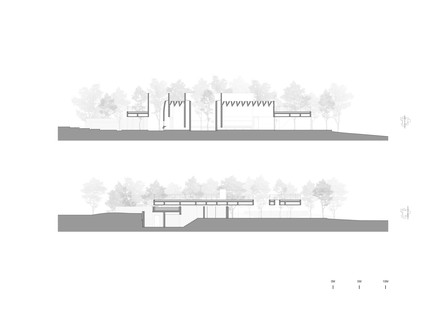 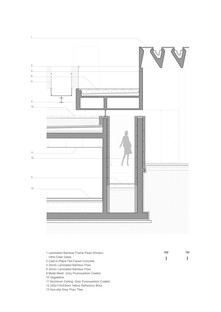 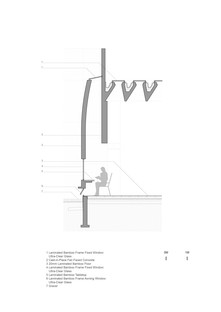