A residential building in a densely populated area of New Delhi opens from the inside out, to elevate the living experience. Light, ventilation and interconnection are the key elements of the project designed by Studio Lotus. Traditional building models cleverly combine with technological innovation. 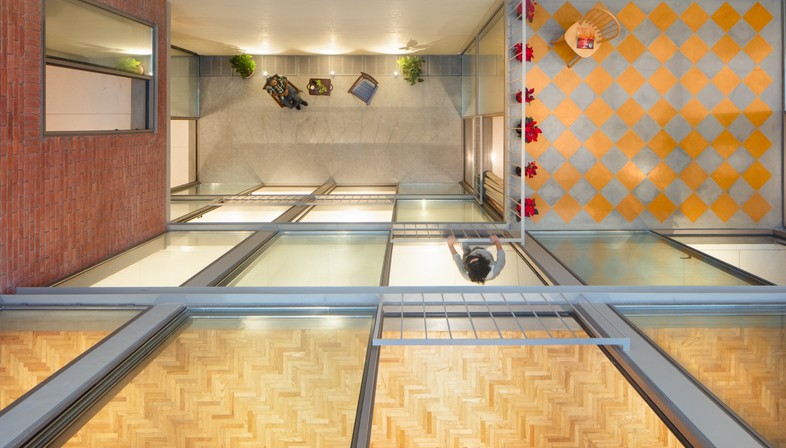 Studio Lotus is an architecture studio based in India that combines a design impulse towards contemporaneity, structural innovation and international breath, with the influence of its Indian roots. The Stacked House, built in 2019 in New Delhi’s Panchsheel district can be interpreted as an example of an important path for the implementation of an alternative morphology of residential areas in India: a synthesis between traditional building models and innovative technological choices.
Founded in 2002 by Ambrish Arora, Ankur Choksi and Sidhartha Talwar, Studio Lotus has distinguished itself over the years for its multidisciplinary approach based on conscious design and therefore on development paths that put the local environment at the centre.
One of the most recent and brilliant examples of this approach was the Krushi Bhawan, a government building commissioned by the Department of Agriculture and Farmers’ Empowerment, in which local Indian craftsmanship techniques have been harmoniously incorporated into the design of the façades, transforming architecture into a cultural manifesto.
With the Stacked House, the studio instead tackles the rather challenging issue of population density in New Delhi, with a new construction project on a small plot closed off on three sides by the surrounding residences. Overlooking the street to the west and standing 9 metres tall, the entrance front must provide for the light and ventilation needs of the whole building, immediately becoming a place of exchange with the vitality of the neighbourhood.
The new residence actually needed to house two families, that of a son with his wife and two children, as well as that of his parents. The idea was to create two independent residential units in the same building, as superimposed but also interconnected duplexes. 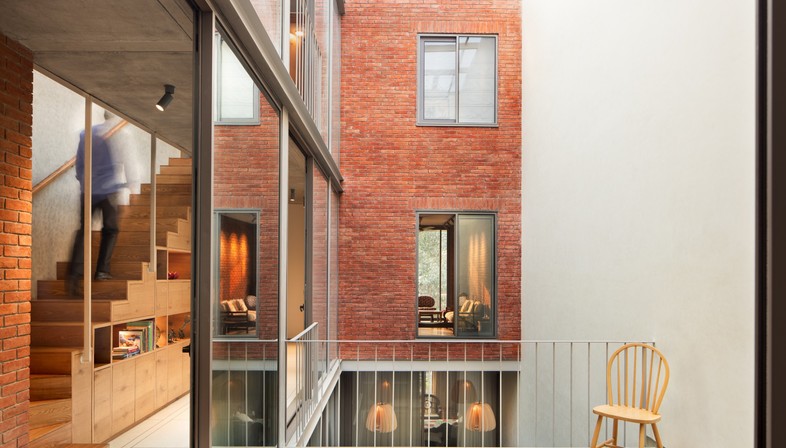 In Southeast Asia’s traditional buildings, the presence of vegetation as an element that offers an ideal climate holds a central value. In large cities, that natural element – which in the countryside is part of the local context and of the housing ecosystem – is often denied. On the contrary, the high population density drives urban developers to exploit every square metre of common land. Those who can, compensate for this unnatural state by obtaining space for plants within their own living environment. When and where possible, this choice means the creation of courtyards, patios and double-height rooms favouring the life of plants and vegetation, but also the exchange of air and light.
This is precisely what Studio Lotus also had in mind for the Stacked House, conceived, as the name implies, as an overlapping of different levels, interconnected not only by stairs, but also by a system of patios closed off by sliding doors and external and internal windows and characterised by a mutual staggering.
The building is vertically distributed over 5 floors, plus a usable garden roof, with rooms organised around these two focal points inside a closed volume on three of the four sides. The natural air circulation originates from the balconies built on all floors and facing the street to the west, and develops indoors thanks to the open patios.
What is often considered a microclimate problem in houses closely built together and without a double view – in other words the absence of air and natural lighting – has been resolved by Studio Lotus by opening up the house from the inside out.
The presence of these “vital wells” also makes it possible to open up numerous views between the floors, favouring a strong visual connection between the different units. The apartments, located on different floors in order to offer mutual privacy are, at the same time, able to favour the development of that important and much needed sense of community life.
The only open façade – the one that frames the face of the building – has been constructed with brick cladding, alternating with the balconies in smooth exposed concrete that extend towards the street with staggered depths depending on the floors. A simple gate divides the street from the inner courtyard, which continues into the covered but open vehicle garage.
The west side of the building houses the living rooms and the double bedrooms of the two units, opening through the main courtyard into the rear volume which, respectively, houses the dining room and kitchen on the lower floors and the bedrooms on the upper floors. The general internal staircase connecting the duplexes is illuminated by the smaller patio. Balconies and walkways connect these living spaces, focusing the attention on the triple-height central courtyard. The verandas overlooking this side are extensions of the internal living spaces, from which the members of the family can converse just as they would in a traditional Indian "aangan" (typical open courtyard).
To maximise the permitted heights, engineer BL Manjunath conceived an innovative hybrid structural system consisting of a modular metal grid of beams and columns with concrete poured into the frame, thus obtaining an unobstructed view and a rather “light” and modern internal landscape. Indeed, with details such as this one, integrated with the use of white plastered walls, exposed metal finishes and a significant amount of glass, the Stacked House appears to describe a western home. 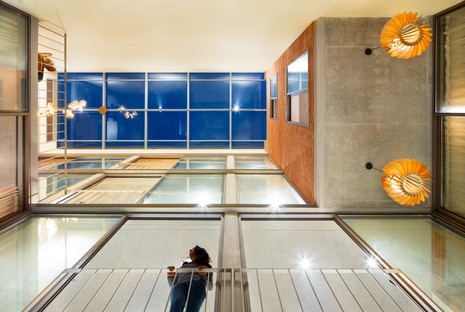 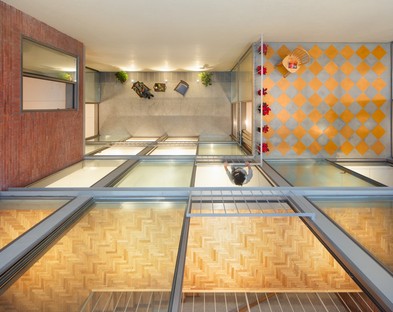 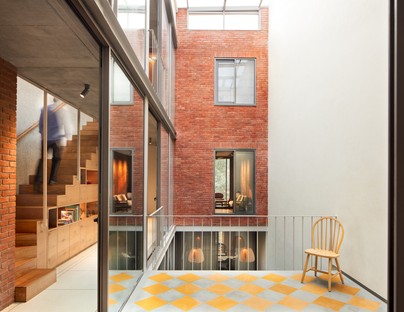 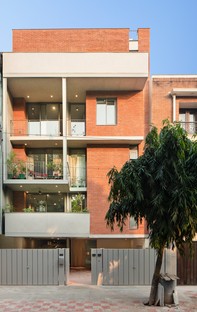 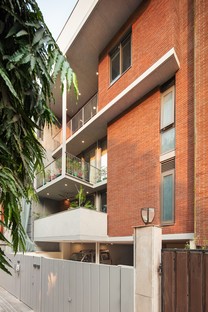 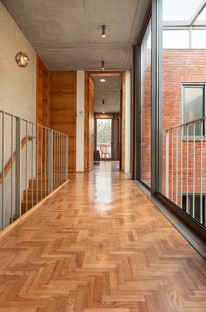 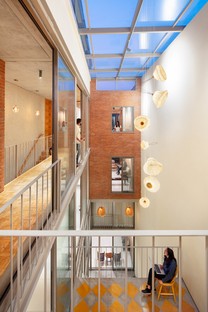 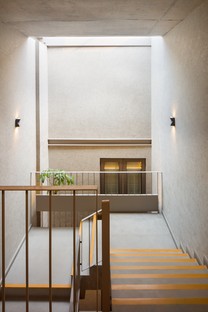 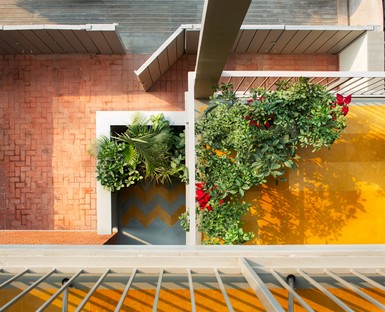 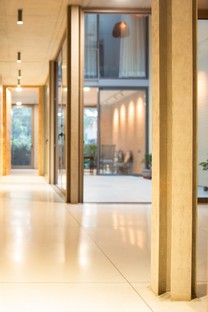 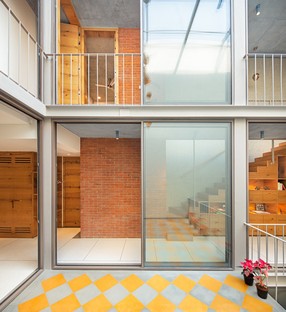 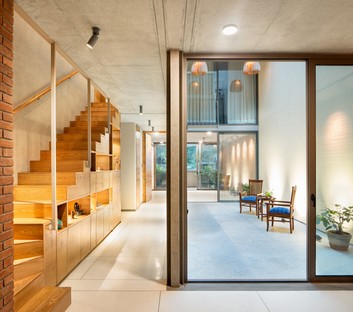 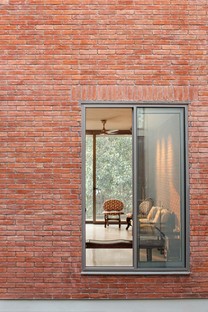 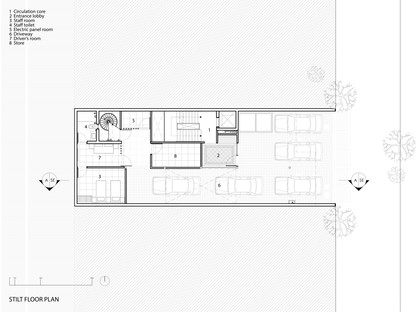 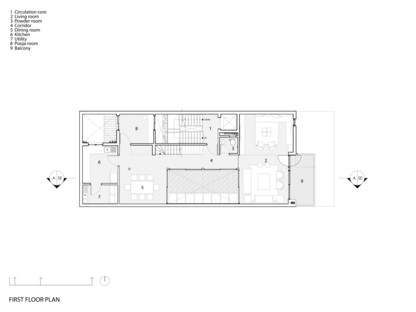 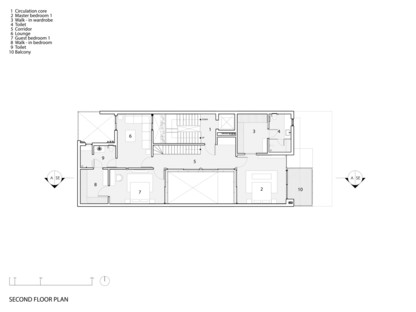 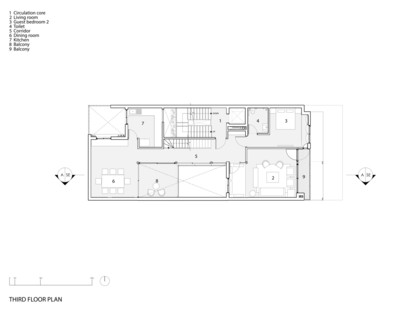 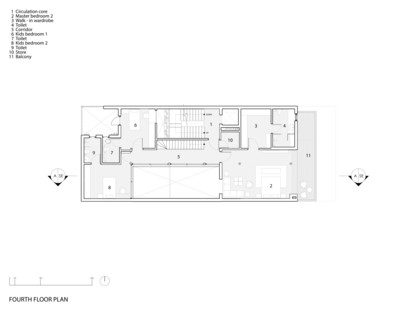 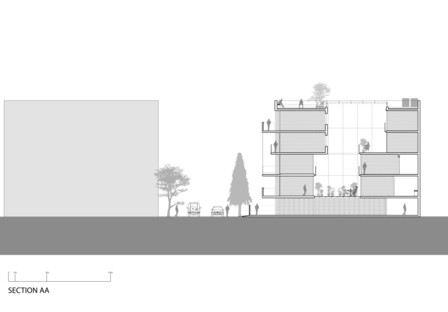