ZED Lab is an Indian firm that specialises in passive and sustainable architecture, one excellent example of which is the new girls’ hostel at St. Andrews Institute of Technology and Management. The team of architects, headed up by Sachin and Payal Rastogi, describe the project as the intersection between education, housing and sustainability, as viewed through a vernacular lens. 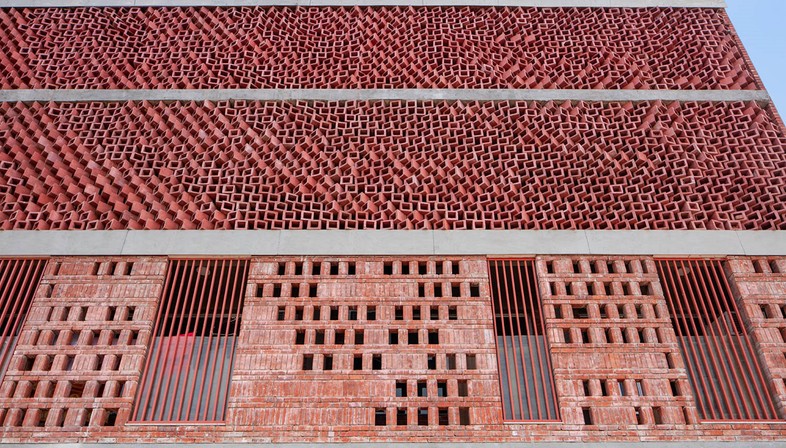 The new Girls’ Hostel Block at the St. Andrews Institute of Technology and Management is the work of Indian architecture firm ZED Lab, which stands for ‘Zero Energy Design’. A firm which specialises in the design of sustainable, passive buildings which are capable of providing for their own needs. This project, located in the city of Gurugram in the state of Haryana, northern India, was completed at the end of 2020, taking inspiration from an adjacent building that is home to its male counterpart.
Made from brick and exposed concrete, it features distinctive structural elements left in full view, both internally and externally, as well as on each side of the building. Its spatial layout also offers total freedom of movement within the rooms, which have been designed for optimal thermal comfort and a with a functional distribution intended to achieve the goal of total passivity and sustainability. All in all, it can accommodate around 130 students over four floors of dormitories. In addition, there are also auxiliary spaces such as a canteen, break areas, and rooms for the girls to socialise. The ground floor is home to twelve double rooms, but also a reception, a pantry and an activity room, where students are free to organise their own meetings, get-togethers and social events.

With the constraints put forward by the client in mind, ZED Lab decided to connect the interior and exterior spaces on different levels, blurring the boundaries that would usually distinguish them. However, the stand-out feature of the Girls’ Hostel Block is, without question, its self-supporting façade, which stands a full ten metres from the main body of the building. The resulting gap is large enough to contain the entrance foyer and hall, designed to be outdoor spaces that are, however, covered on several sides by the vast windows that provide views from inside and plenty of natural light from outside. What makes these façades truly unique is the use of a type of exposed brick that was specially created to ZED Lab’s specifications in a hollow cube shape. With the aid of parametric modelling, these bricks were then arranged in such a way as to create a striking and highly dynamic effect, redolent of a wave rippling across the façade. But that’s not all - according to the architects, these custom-made bricks serve not just an aesthetic purpose, but also three key practical functions: “Not only do they provide adequate thermal mass to absorb the heat, but with a depth of eight inches, the direct radiation has to penetrate through several layers within the block, getting reflected on different surfaces before entering the interiors and reducing the glare. In addition, since the block is penetrable, the air volume passing through this mass loses its heat through compression on the basis of Bernoulli’s principle. The blocks are also slightly rotated at a specific angle based on the insulation analysis with respect to solar heat gain”.

Lines of LED lights, areas covered with lush turf and colourful furnishings round the project off, helping to lend it that fresh, contemporary spirit which - as per the creators’ idea of using bricks cast on site - pays homage to the rural architectural tradition of the building’s location.

In a press note, the architects of ZED Lab also comment that the intrinsic functionality of the double façade - with one layer on the inside and the other located ten metres from the main body - helps to shade and regulate the temperature of the interior with a controlled flow of air. What’s more, the innermost façade creates a space peppered with balconies and a courtyard that is freely available for the students to use, with a constant level of thermal comfort made possible by the building’s adaptive behaviour.

Finally, in terms of energy consumption and environmental impact, this system proves to be extremely functional. Indeed, the press note from Zero Energy Design Lab reveals that: “The double-skin facade acts as thermal mass, reducing the incident direct and diffused radiations by 70% on the principal façade, thus, minimizing heat gain within the habitable spaces behind the block wall. This further reduced the mechanical cooling loads by 35%, a marked increment from the ECBC (Energy Conservation Building Code) base case of public buildings”. 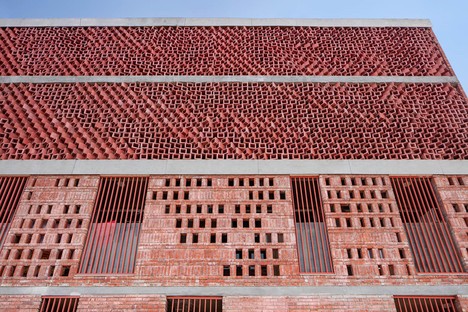 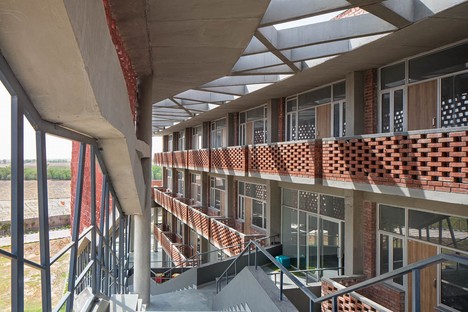 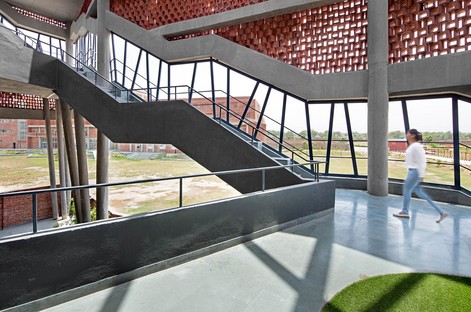 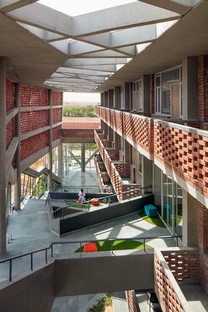 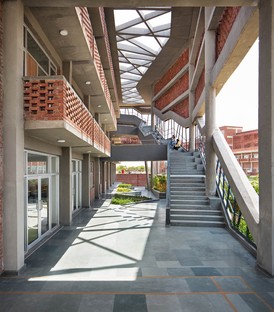 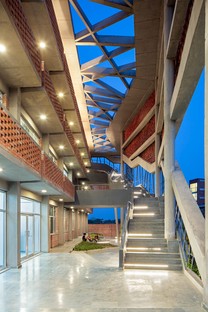 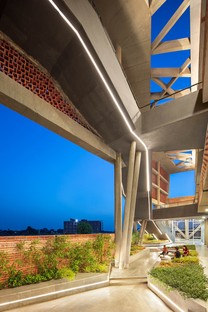 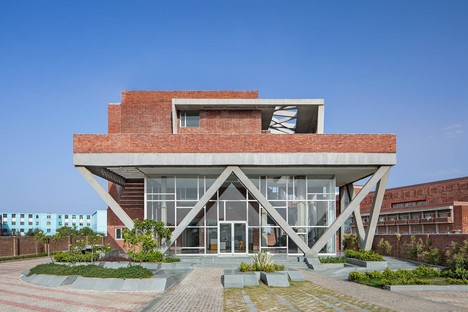 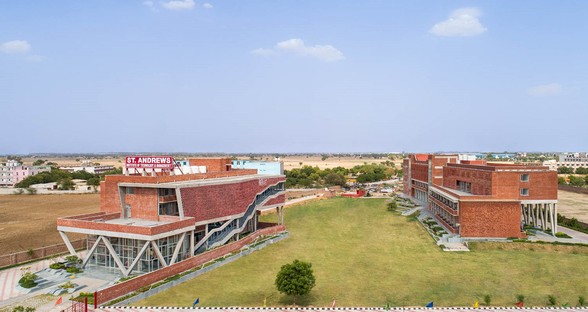 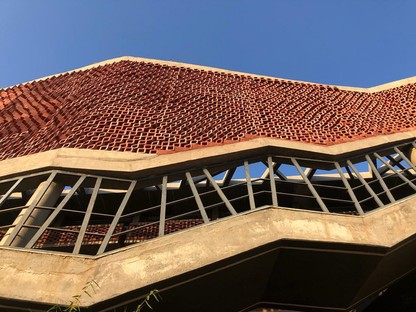 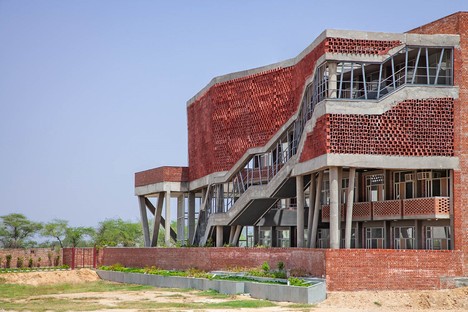 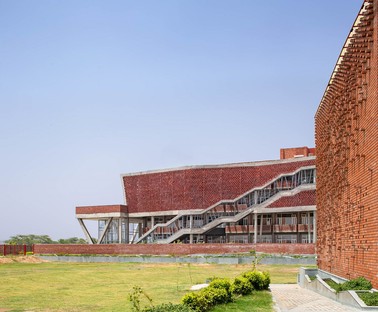 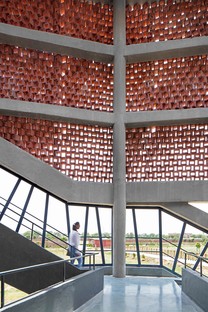 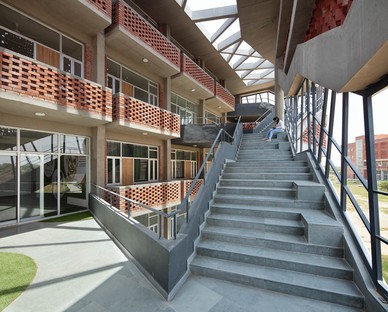 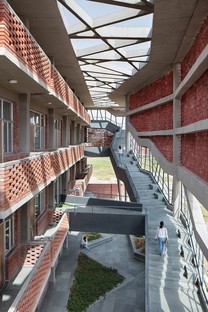 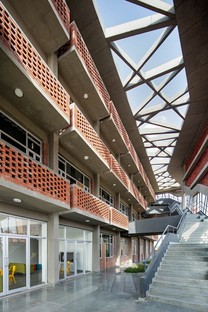 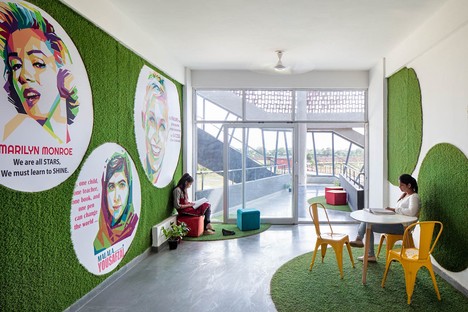 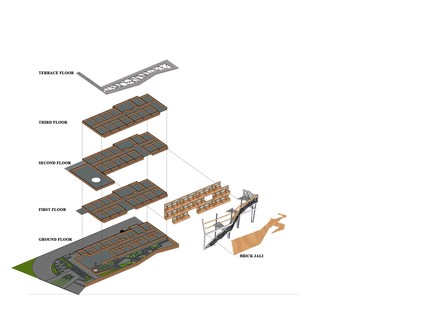 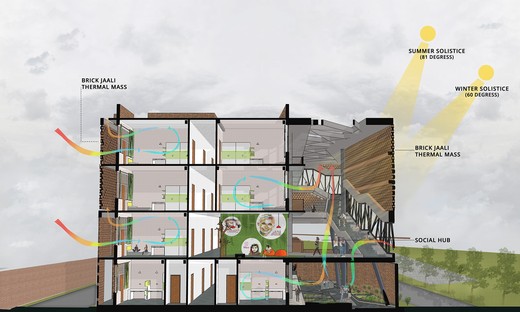 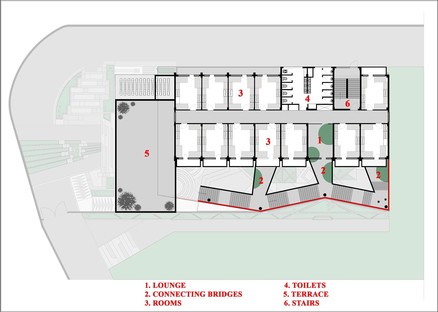 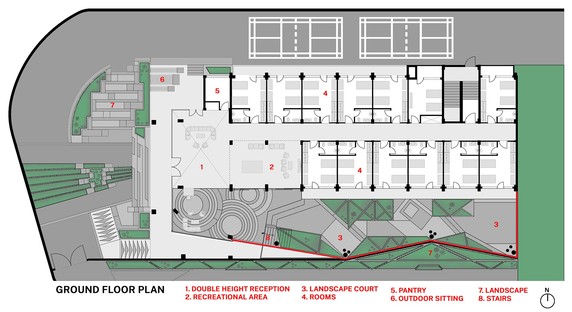