Studio DideA new image for a residential interior in Palermo

DiDea radically renovated a 70s apartment in Palermo, giving the home a completely new image by improving the distribution of spaces and functions and letting more daylight into the rooms. DiDea redesigned the interior of a top-floor apartment in a residential building constructed in the 70s overlooking Parco della Favorita in Palermo. The architects came up with a radical project giving the home a completely new image, improving the distribution of spaces and functions and letting the maximum amount of light into the interiors. 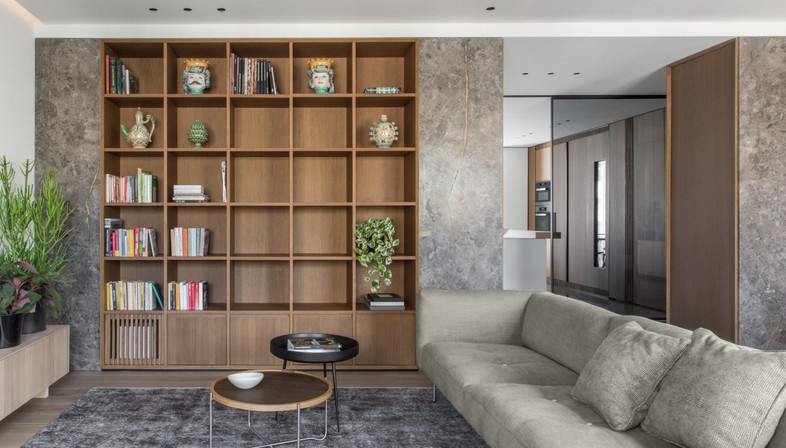 The apartment renovated was a fairly anonymous one with the layout and distribution of space typical of the 70s: a central corridor with a succession of rooms on either side. The architects gave architectural form to the client’s demands by completely renovating the flat, demolishing all the partition walls and radically altering the functional layout. The architects of DiDea made the part of the apartment at the front of the building the living area, and placed the sleeping area at the back, with utility areas concentrated in blocks which are clearly identified with different wall coverings, made of wood.
The organisation of functions was planned taking the apartment’s orientation into account. In the new layout, the architects do not interrupt light lines crossing the apartment from the windows on the eastern and western sides of the building, ensuring that the entire living area enjoys plenty of daylight. The living area is an open space combining the kitchen, living room and dining room; the kitchen can be separated from the other rooms by a sliding smoked glass door. 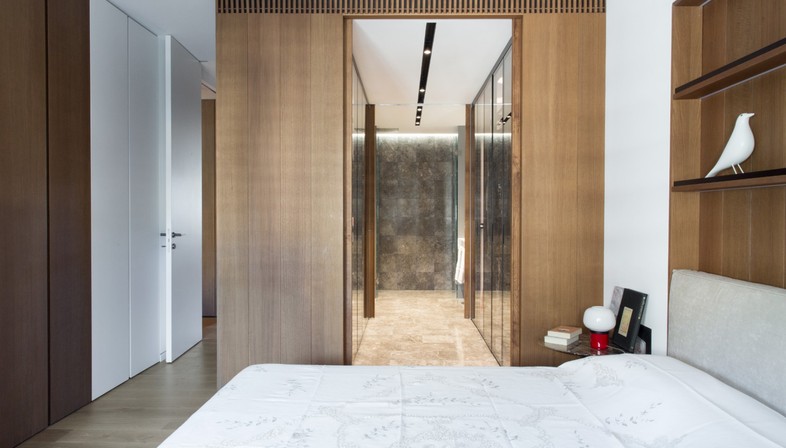 The project was implemented with great care and attention to detail, with furniture almost entirely custom-designed by the architects of DiDea and made by local artisans, leaving nothing up to chance. In the big space created by completely eliminating all the partitions in the apartment’s original layout, the architects separated the living area from the sleeping area with a folding smoked glass door and designed two wooden walls containing the utility areas today’s homes require. The first of these wood-covered areas begins by the pillars in the kitchen and crosses the entire dining room as far as the study, containing the pantry and courtesy bathroom. The second wood-covered area contains the cabinet of the study and crosses the corridor to incorporate the walk-in closet and the bathroom serving the master bedroom. 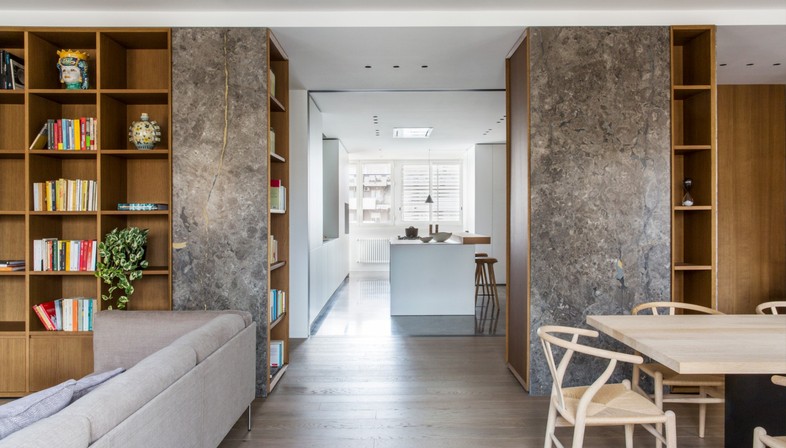 This painstaking attention to detail is matched by a measured colour palette in hues of beige and brown, such as the tobacco colour of the oak woodwork and the oak parquet flooring in the living room and bedrooms. The colour palette highlights a number of details by contrast, such as the white elements in the kitchen or the cabinets in the guest bathroom, or the black wall of the study. In the organisation of space and design of the furniture, it is always simple, minimal lines that prevail, in contrast with the mass-produced image of 70s apartments, giving the space a new identity of its own. 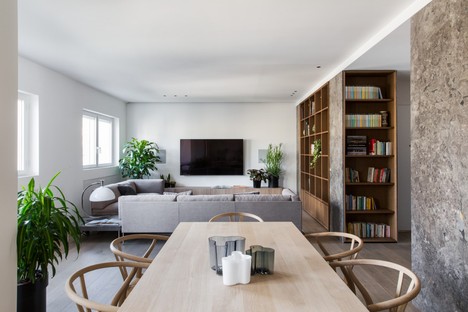 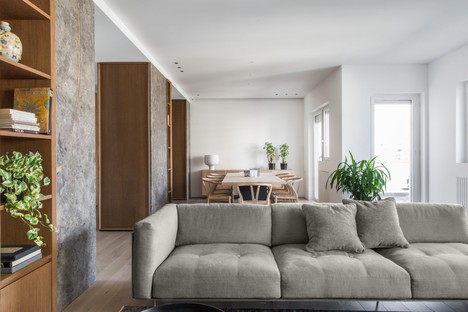 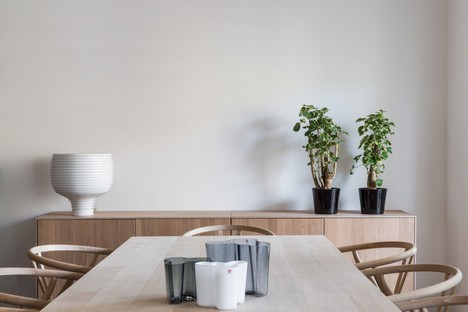 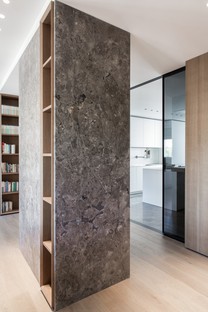 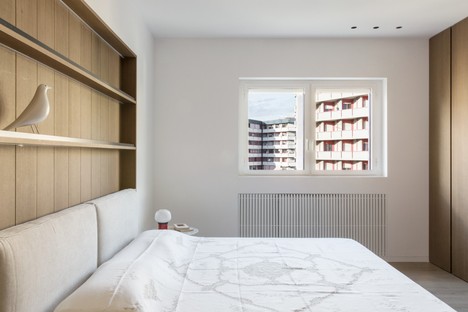 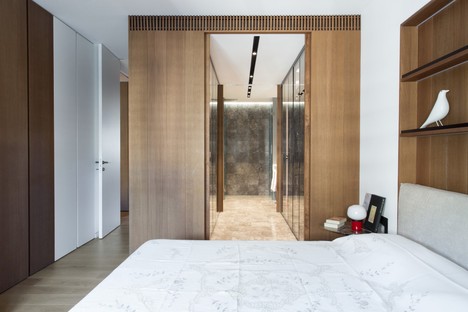 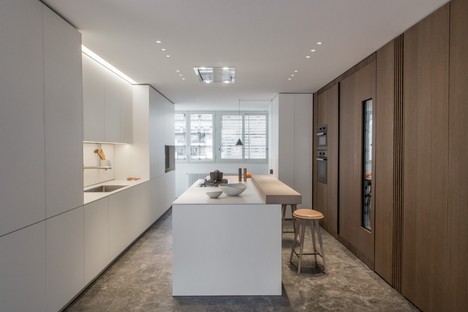 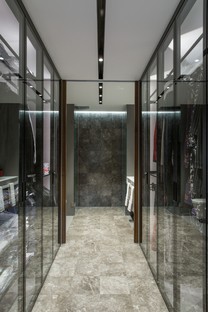 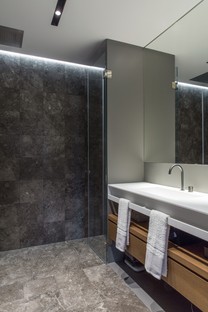 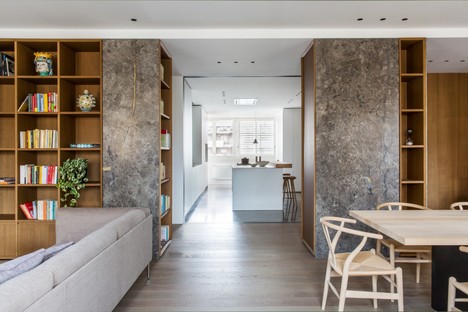 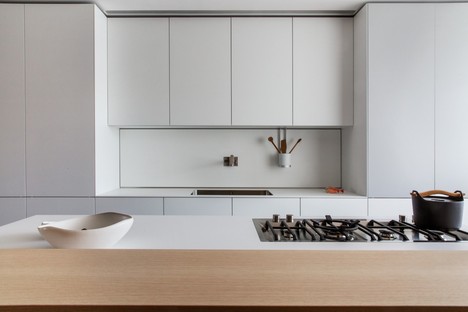 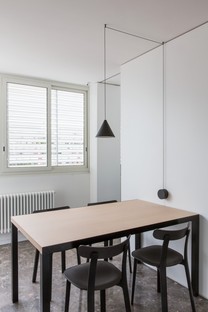 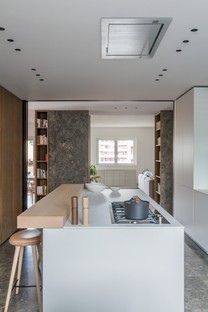