The South Street Seaport district of Manhattan, New York, has undergone major redevelopment, including the new pier building: Pier 17. The project was designed by the firm SHoP Architects which, until 13 September, will be the star of The Architects Series, the cultural programme of SpazioFMGperl’Architettura, the Iris Ceramica Group gallery in Milan. 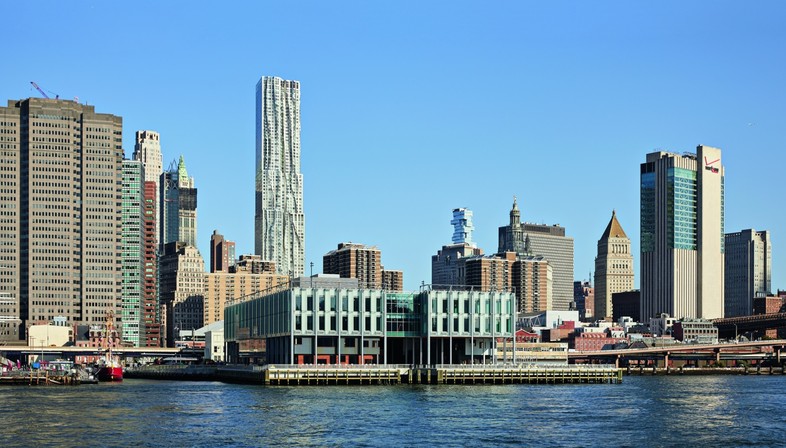 SpazioFMGperl’Architettura, the exhibition gallery of Iris Ceramica and FMG Fabbrica Marmi e Graniti, the top brand of Iris Ceramica Group is about to reopen in Milan after a summer break. Until 13 September, the New York-based firm SHoP Architects will be the star of the 9th edition of The Architects Series, the cultural format that the magazine The Plan has been publishing for SpazioFMGperl’Architettura since 2018. The behind-the-scenes docufilm dedicated to the architectural firm offers an insight into the modus operandi of the architects and illustrates some of SHoP Architects’ well-known projects. One of the most recent ones is Pier 17, the renovation project of the new South Street Seaport pier in Manhattan, New York, which has become one of the city’s trendiest spots, just a few months after its official opening. 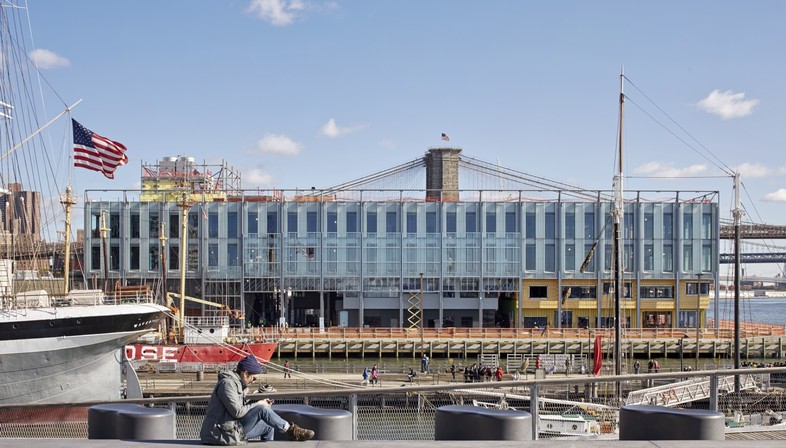 South Street Seaport is one of the oldest districts, or rather urban areas, of New York City. It is precisely in this southern tip of the island of Manhattan, where the most important skyscrapers can be found today, not far from the city’s Financial District, that the “old port” of New York was built in the 19th century. Thanks to its position and favourable winds to set sail, this area was the preferred place for mooring sailing ships. Throughout the 19th century, the port was extremely busy and the adjacent district had been considerably expanded with the construction of the docks, characteristic red brick warehouses that are still considered among the city’s oldest buildings.
The development of steam ships, which resulted in sailing ships being no longer used as a means of transport, inevitably led to the decline of this area. In fact, the conditions of the riverbed and the lack of space to expand the port made it impossible for large ships to dock.
Since the late 1960s, several attempts have been made to recuperate the area, which had become run down, leading to the opening of the large Pier 17 mall in the mid-1980s which, however, failed to achieve the desired success.
The urban restoration project implemented in recent years, with the Pier 17 redevelopment by the architectural firm ShoP, has brought this truly fascinating place back to life and has now become one of the trendiest shopping areas in New York, just a few months after its official opening. 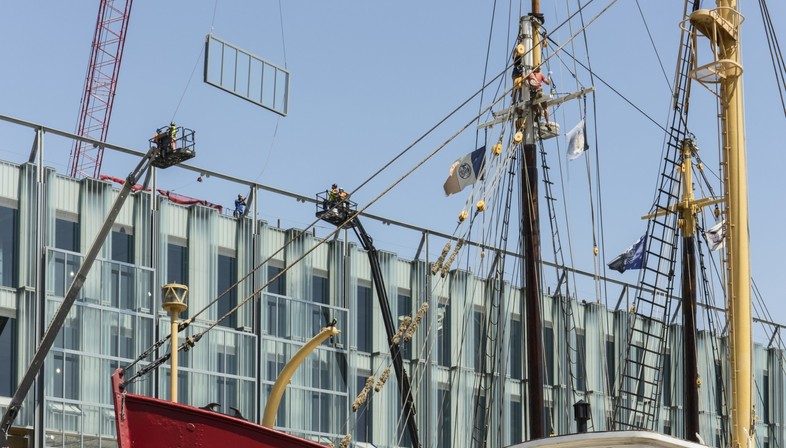 The project by SHoP’s architects remodelled the existing mall to create a mix of retail and dining spaces that hinted at the typical New York street landscape, made up of smaller individual buildings separated by outdoor pedestrian walkways. The building itself, spread over the two upper levels, forms a large single roof for these small shops. In case of bad weather, huge glass doors descend from above to protect the ground floor from the elements, yet still opening up views of the urban and natural environment. This is a key element of the project that the fully renovated Pier 17 also offers from its fully equipped rooftop, from where visitors can enjoy a breathtaking panoramic view of the Manhattan and Brooklyn bridges, a must-see tourist attraction featured in all of the city’s itineraries. 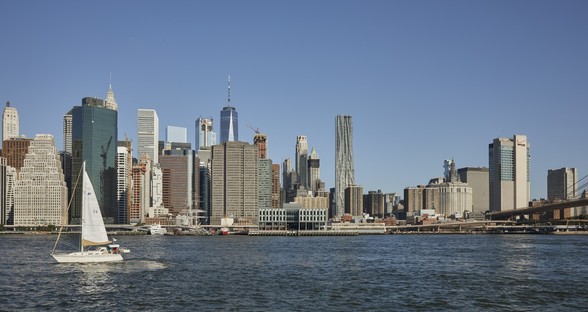 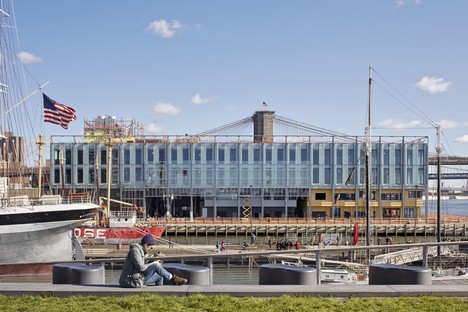 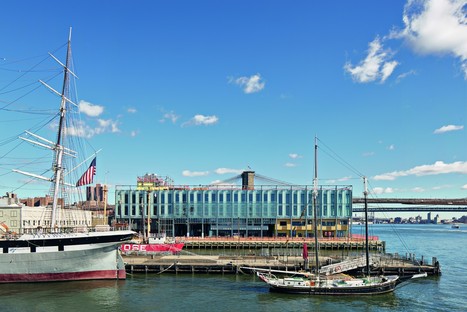 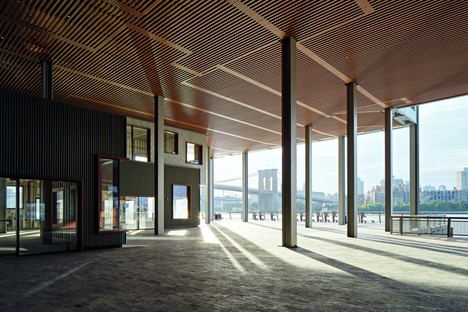 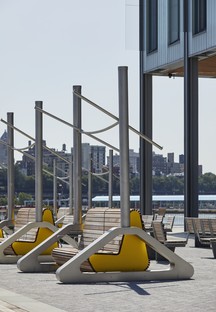 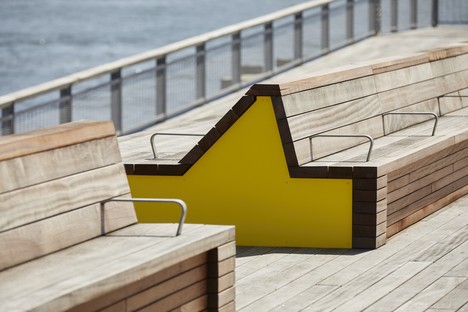 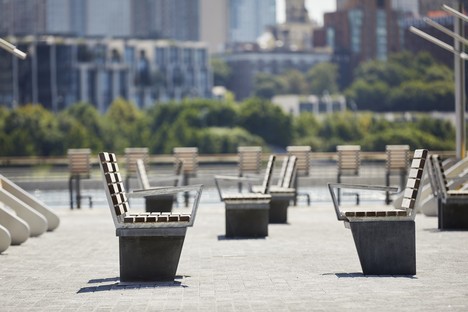 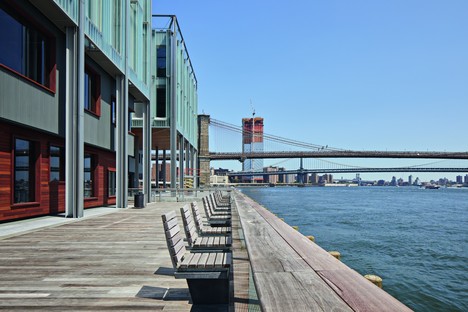 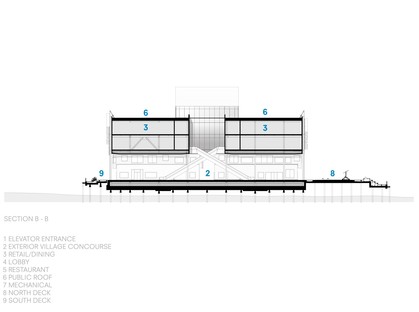 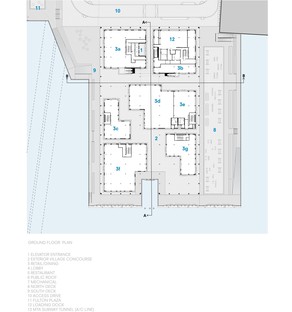 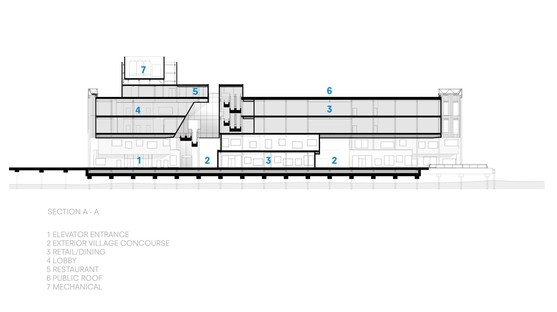 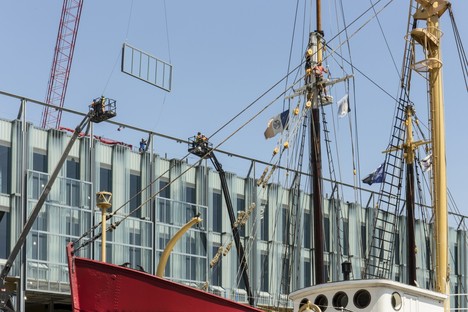 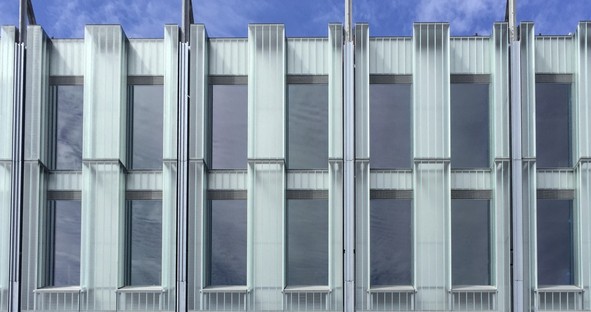