Renzo Piano Building Workshop’s new courthouse near Porte de Clichy in Paris is complete and due to open on April 16, combining courtrooms and judicial offices in a single building. 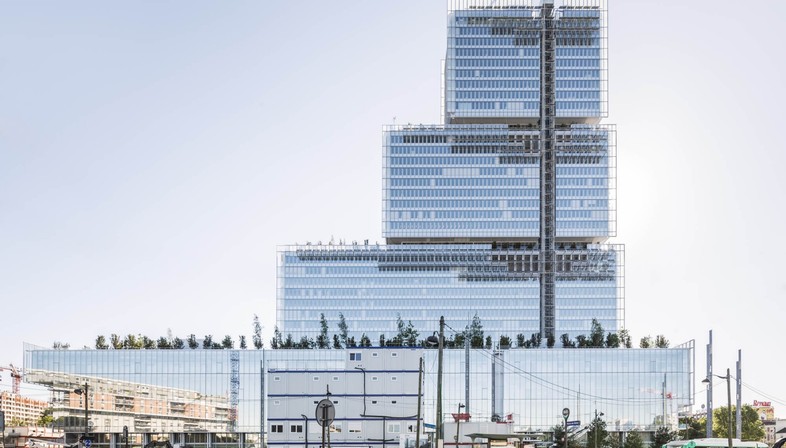 The new Palais de Justice in Paris designed by Renzo Piano Building Workshop is now fully operative. The building was officially completed on August 11 2017, but after the Paris terrorist attacks, it was judged necessary to improve antiterrorism measures in view of the building’s critical function. All the courtrooms and judicial offices which had previously been scattered around the city have now been combined in a single place, leaving symbolic, prestigious roles such as the Court of Assizes, the Court of Appeal and the Court of Cassation to the historic Palais de Justice in Île de la Cité. 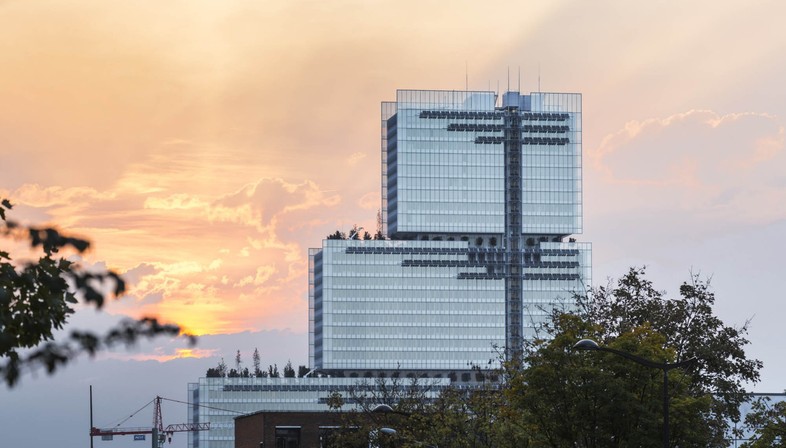 The idea inspiring RPBW’s project was that of bringing together all the courtrooms and judicial offices in a single building, a construction that would become an important urban landmark, a vertical city of justice and a symbol of rebirth for the entire Porte de Clichy district. At the same time, the new Palais de Justice symbolically conveys a modern, humanistic vision of justice, a feat achieved using a number of elements such as transparent, brightly lit spaces, or the building’s orientation on a northwest / southeast axis symbolic of its opening toward the city.
The new 160 m skyscraper was built on an L-shaped lot near Porte de Clichy, in the 18th arrondissement, between Boulevard Périphérique and Parc Martin Luther King. The smaller southern and northern walls face the city of Paris and Clichy, while the offices in the longer eastern and western walls have panoramic views of Montmartre and the Tour Eiffel.
The unusual “step” shape chosen by the architects of RPBW makes the building stand out from the other skyscrapers so that it is instantly recognisable on the city skyline. 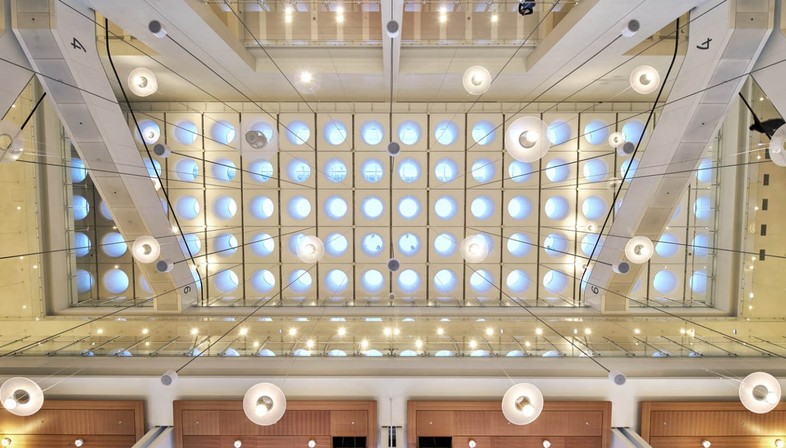 The first volume of the skyscraper consists of a foundation 5 to 8 floors high with a prevalently horizontal orientation containing a reception area and public services. This foundation also contains the base of the tower, which then rises up in three overlapping parallelepipeds of decreasing size. The three parallelepipeds containing offices seem to levitate above the foundation. The horizontal separation of different blocks is underlined by the presence of a big 7000 sqm garden on the 8th floor and hanging gardens on the 19th and 29th floors. The gardens not only give the big building a more human look and provide a “green lung”, but are important spaces for informal meetings and for users’ wellbeing. 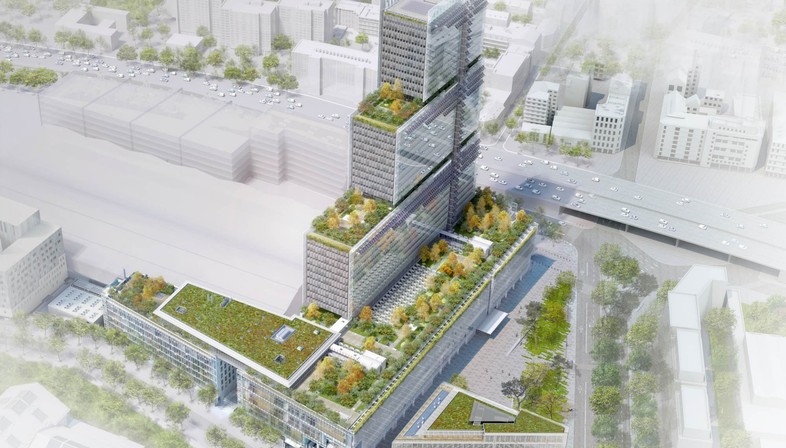 A roof extending over the ground floor plaza identifies the entrance to the courthouse; members of the public go directly into the full-height Grand Foyer, in the centre of the foundation block, and the Salle des Pas Perdus, where the flow of users and staff is organised into various routes.
The 28 m high Grand Foyer is a space flooded with daylight from skylights on the ceiling and from the all-glass façade. These solutions make the foyer an important reference point in the building, visible from the upper levels and from the outside, an accessible urban space open to the city and at the service of its inhabitants. 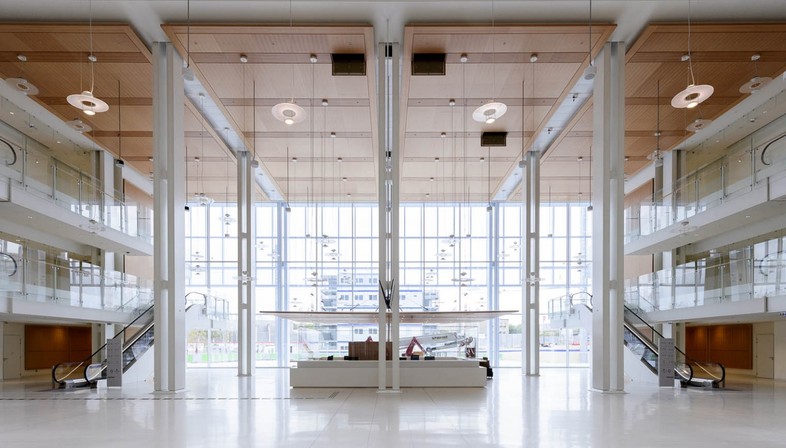 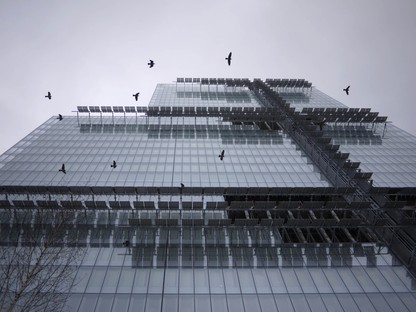 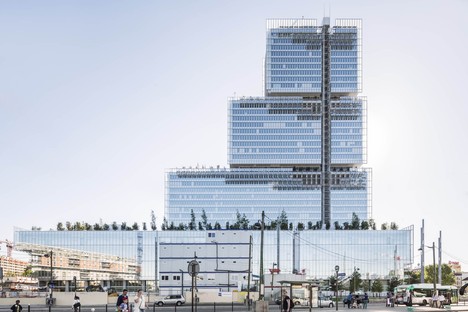 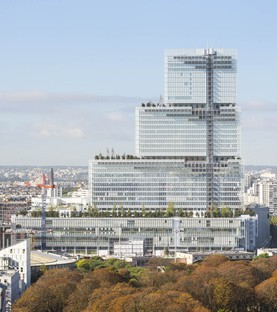 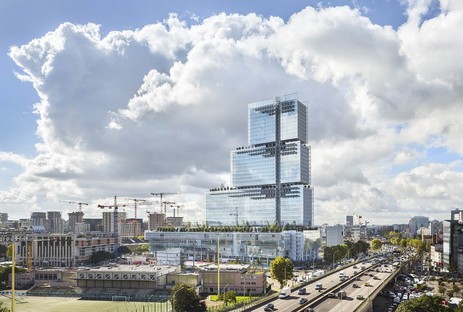 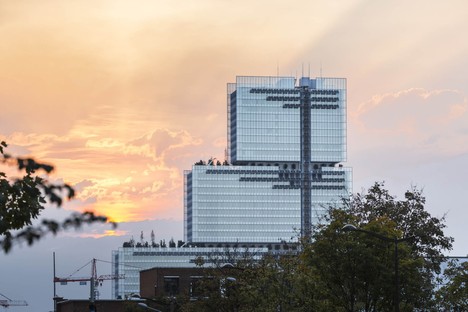 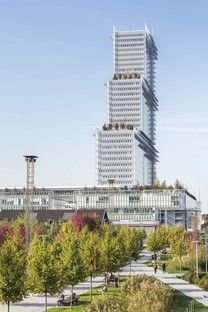 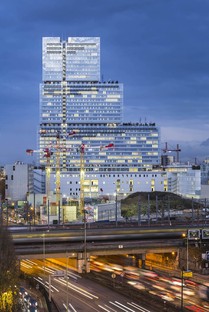 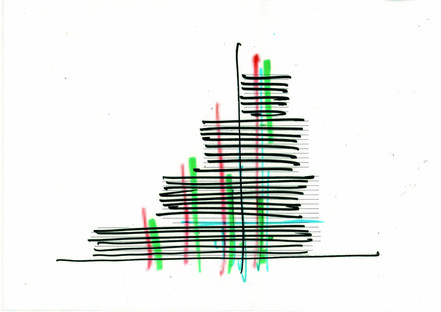 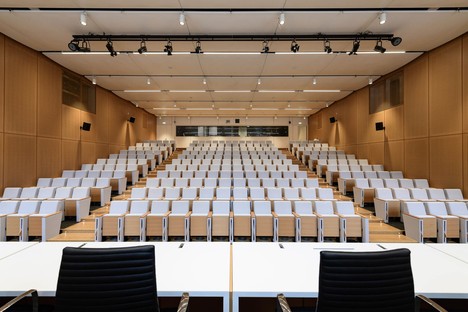 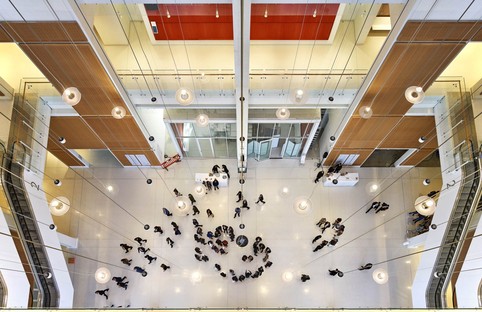 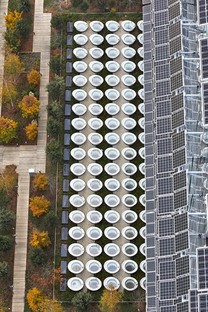 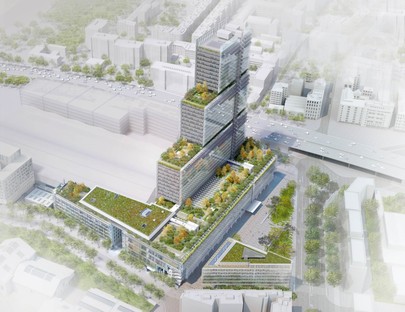