Raúl Sánchez renovated a ground-floor apartment in a building in the centre of Viladecans, near Barcelona, on the basis of the load-bearing wall that divides the space in half. The Magic Box is a golden wardrobe that he added to act as the threshold between rooms offering the perfect setting for the two daughters’ play. 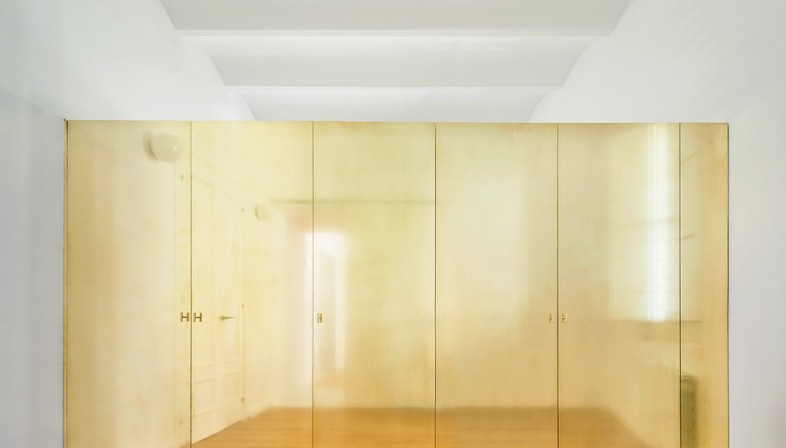 Spanish architect Raúl Sánchez views circulation as one of the most important aspects of the home interior. It is the key theme of a project he calls The Magic Box Apartment: renovation of a ground-floor apartment in the centre of Viladecans, an industrial town just outside Barcelona. Ways of moving around in the house also represented a fundamental key to another home renovation project, in Barcelona’s central Raval district, Duplex Tibbaut, recently described in Floornature. In that project, the strong longitudinal orientation of the two floors that had been joined to form a home on two levels suggested to the architect the addition of a structural box to contain a number of key functions of the home, such as the stairs, around which to create a type of circulation that made optimal use of the available space, a factor that was missing in the original home.
In the case of the Viladecans home, the project’s starting point was the original load-bearing wall dividing the apartment from the lobby and the staircase to the upper level, occupied by another household. The functional requirements of a family with two daughters inspired the architect to completely rethink the ground-floor layout, retaining the central wall as the backbone of the home, while all the other non-load-bearing internal walls were demolished and new ones were put in position.
The structural wall divides the apartment into two asymmetrical parts. The portion on the street corner is larger, and has plenty of windows, while the internal part is more private, with only one opening onto the back yard. Reversing the common idea that greater privacy is required in the bedroom, while the living area may be directly connected with the street, in this project the bedrooms are arranged around the outside of the house, while the kitchen and dining room occupy the innermost portion. The living area consists of a single room opening onto the back garden, while the other half of the home is divided into several communicating rooms, one for each member of the family. Circulation thus becomes the key to the project: each bedroom has two doors, one opening onto the corridor on the other side of the central wall and the other passing from one room to another. The last bedroom, the farthest from the entrance and the most private, opens directly onto the back yard, and this is where the architect puts the parents’ bedroom, maintaining a relationship with the garden and with the kitchen on the other side, which is in turn connected to the garden by a big sliding glass door.
A big door in the central wall expands the living area and gives it a view of the street. This second room is used as a more private sitting room and a buffer between the master bedroom and the daughters’ bedrooms, which are not really separate rooms, as the architect has introduced an item of furniture common to both rooms, which divides them while dominating the space. The bedrooms mirror one another on either side of what Raúl Sánchez calls the “magic box”: a shiny golden monolith that contains the wardrobes, but looks like a precious treasure chest or a door between two worlds, offering inspiration for the two girls’ imaginations and play. Only 210 cm high, in rooms with a ceiling at 350 cm, the magic box does not completely separate the rooms, allowing the two sisters to communicate in a variety of ways.
Along with the idea of circulation – of people and words – another key to the project is the circulation of glances: open niches and tall windows in the stairwell let new light in, announcing the new stylistic idiom of the apartment right from the entrance hall. Accents are provided by use of materials and colour: the direction of the planks in the parquet of all the bedrooms changes direction on the other side of the central wall, marking the difference in the purpose of the spaces, while the utility areas (bathrooms and hallways) have white microcement flooring. The lintels and door jambs are covered with stainless steel polished to a mirror sheen, marking the transition between spaces which, though joined together, serve different functions (from the foyer to the kitchen and dining room and from there to the living room). Lastly, fields of colour subtly underline the transition between different spaces, recalling the previous configuration of the home and helping its inhabitants to interpret and make the most of the spaces as they are today. 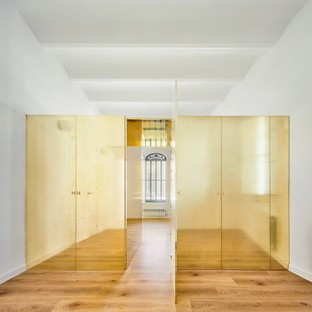 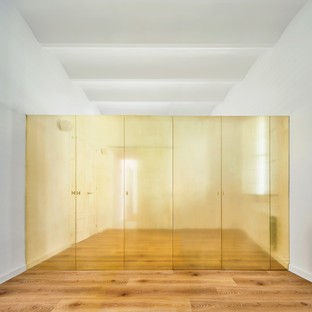 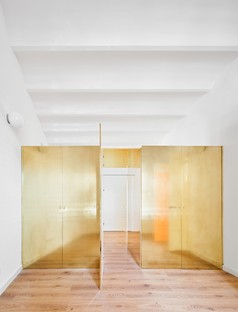 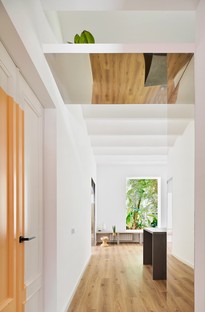 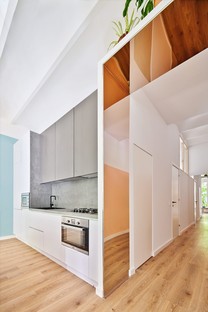 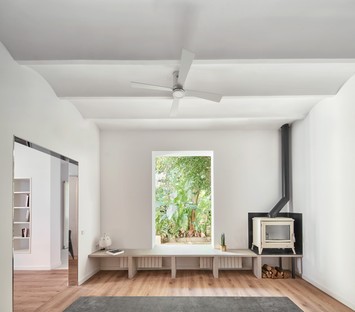 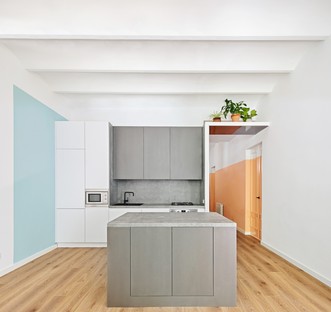 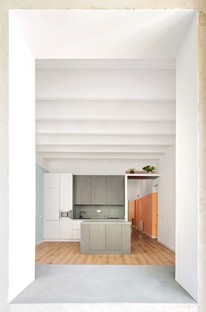 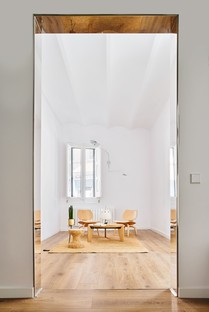 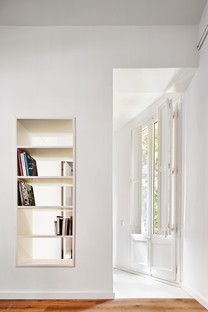 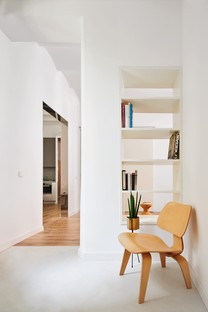 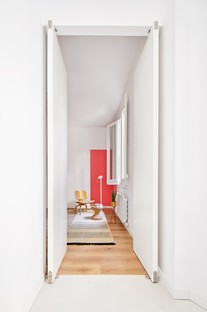 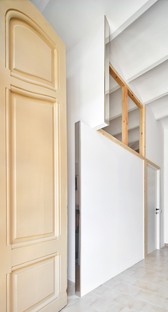 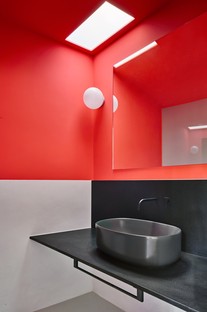 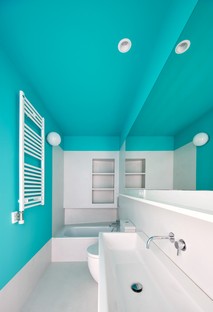 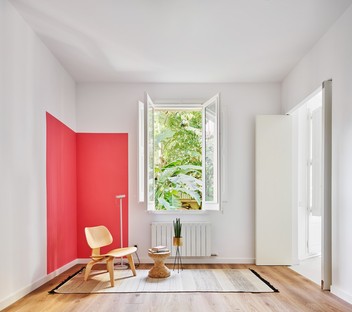 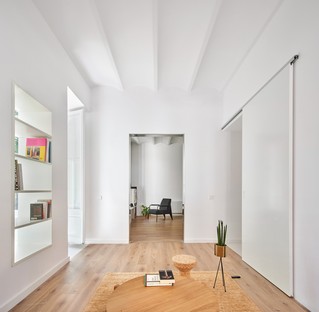 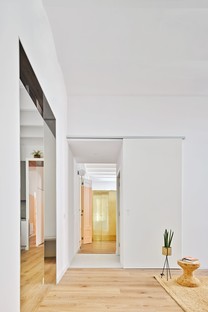 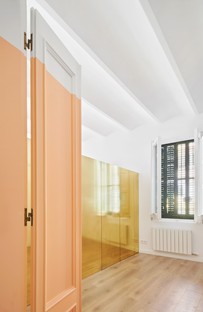 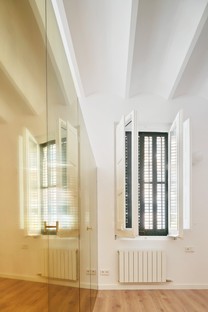 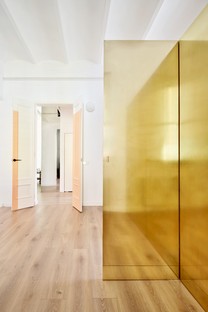 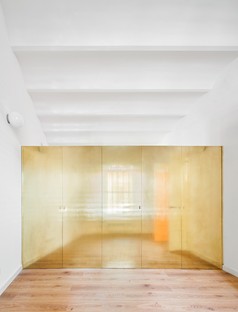 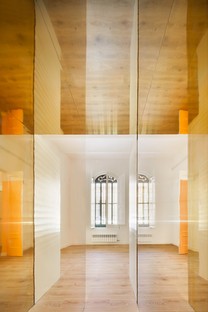 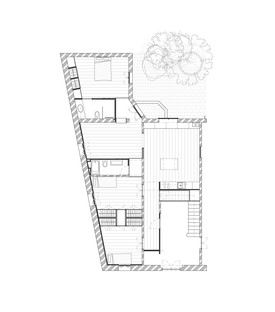 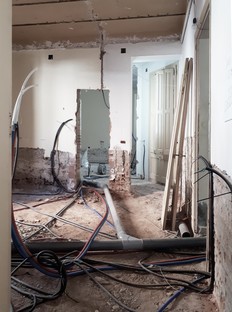