The extension of Knox College at One Spadina Crescent in Toronto was the occasion for NADAAA to design a contemporary volume, the Daniels Building, updated in energy sustainability and in dialogue with the neighbourhood. The Daniels Building translates the vertical thrust of the neo-Gothic building. 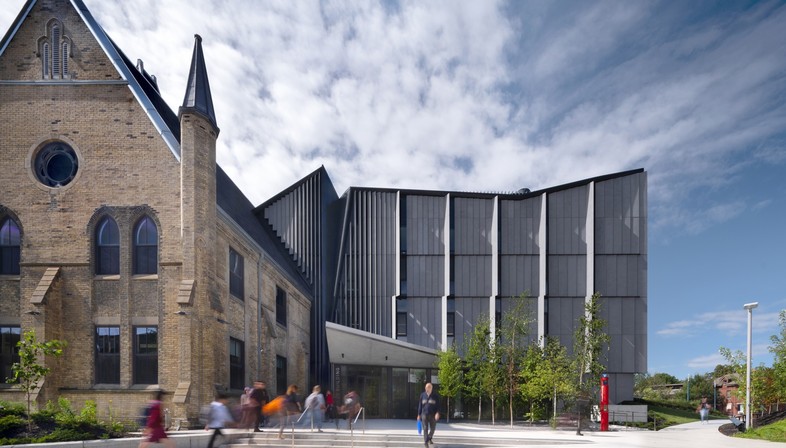 Boston-based architecture firm NADAAA, in collaboration with Adamson Associates Architects and with the consultancy of ERA Architects, confronted the project for the new home of the John H. Daniels Faculty of Architecture, Landscape, and Design in Toronto by means of a pedagogical approach. Katherine Faulkner and Nader Tehrani, principals of NADAAA, describe the process of work on this project as an exemplary container of functions designed for students’ learning with their input and testing. Observing it from a general perspective, the project in itself summarises many of the main architectural issues of today, such as the use of technologies for the overall energy sustainability of the building, the relationship between a pre-existing structure of particular value and an extension built from the ground up, the adaptation of historical environments to contemporary functions, with new users in large numbers, and the strategy of relationship with the urban context.
Starting from the beginning, we need to go back to 1875, when Smith & Gemmell designed the first neo-Gothic building as the site of the Presbyterian seminary in what was then the outskirts of Toronto. Over the years, the building housed a military hospital, a research laboratory, and then, in 1972, it was purchased by the University to become Knox College. The original site has now been transformed by the extension created by NADAAA and partners with the aim of becoming Canada’s primary faculty of architecture and design.
Much of the inspiration for the project seems to have come from the Victorian-era building and its location, known as One Spadina Crescent, a large circular parcel, where Spadina Avenue splits and then rejoins beyond the site and continues northwards, away from the city. This unusual context, in a city with an extremely regular rectilinear layout, shifted the attention from the single architectural object to be restored or built, to the landscape and the new relationships to be established in a crucial traffic junction. The improvement of access routes became prominent in a context of extended and constant use during the day. The designers reserved the north-south axis to vehicle use for the relationship with the city, while on the east-west axis the dialectic with the neighbourhood (residences, offices and schools) was established by the creation of pedestrian walkways.
In what was previously a site accessible with strong limitations, today, while also figuratively maintaining its function as a landmark and an urban monument, the university facility takes part in the public life of the neighbourhood, thanks to the creation of a park that surrounds the building with integrated walkways. At the four cardinal points there are four access points with plazas formed in the vegetation, connected by an external circular walking and biking path. The east-west transversal axis is highlighted in the two larger and more articulated plazas; it continues inside entirely passing through the ground floor and crosses the main entrances, those which direct the pedestrian communication along Russell Street and towards the neighbourhood.
All the fencing around the property has been removed, so that the area, its functions and the greenery are considered first and foremost the heritage of the residents.
Coming from the centre of Toronto, to the south, the now restored Knox College building appears imposing with its Victorian ornaments, pediments, turrets and neo-Gothic arches. Unexpectedly, its U-shaped plan is completed to the north with a rectilinear body with another monumental façade in glass, concrete and steel. Totally different, but inspired by the old edifice, the new building captures the vertical thrust of the former and translates it into contemporary stylistic elements: the curtain wall and the concrete panels combined as cladding elements point upwards, as does the shed roof which inside has a large white sculptural ceiling. The strong dynamism that dominates this volume finds coherence in the complex geometries of the circular park, while the neo-Gothic building resists imposingly in an immobility now consigned to history.
Inside, the small rectangular historical rooms are used as offices, classrooms and a library. Instead, the entire new complex updates the classrooms required by a design faculty, fabrication laboratories of all kinds, for handicraft or with the support of machines, on the first two levels, and a hall and large study spaces on the two upper floors.
Added to the green roofs irrigated by rainwater recovery systems is a highly efficient water-based air-conditioning system.
The project comprises some 14,000 square meters in total between historic spaces and new sections on four levels, conceived as a university centre but also, as Nader Tehrani of NADAAA stated, as a civic space, providing a prospect “where there hadn’t been one before, it extends the public imagination.” 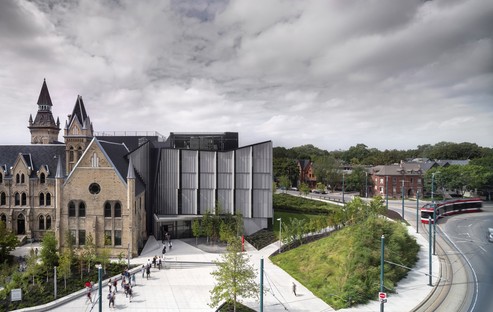 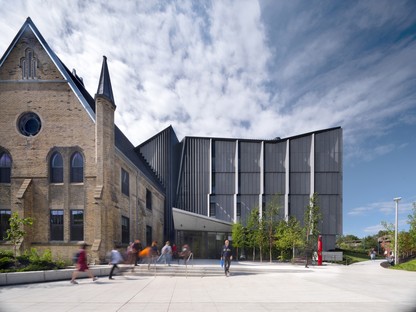 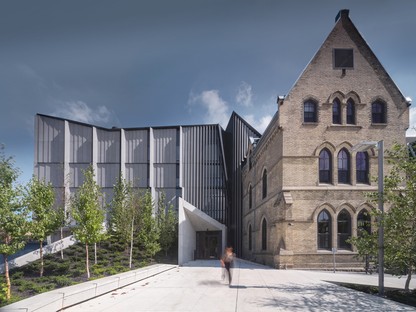 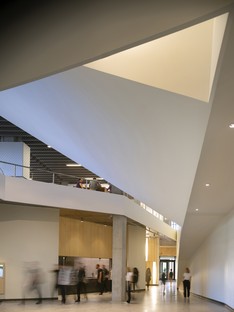 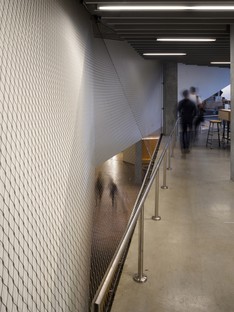 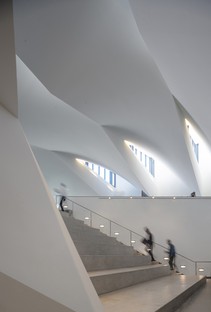 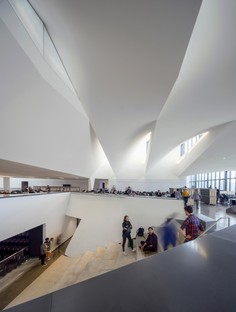 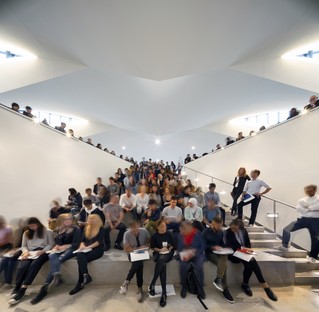 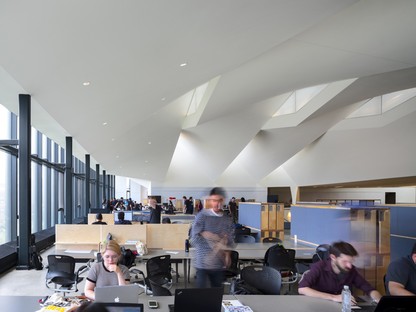 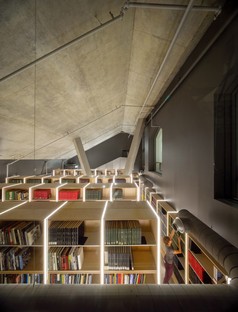 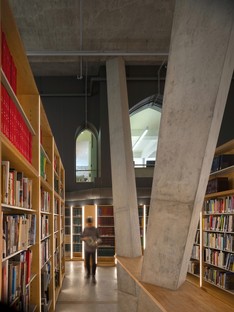 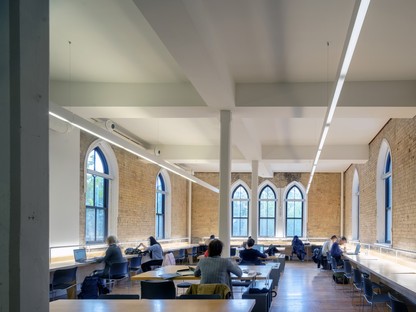 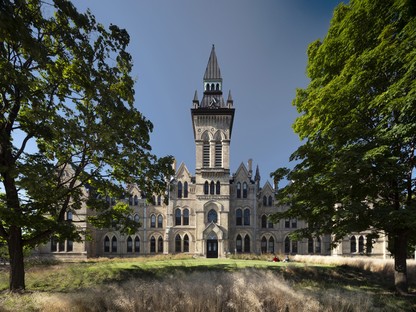 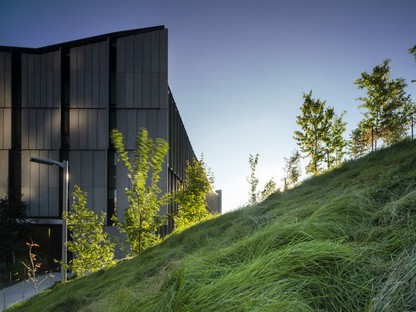 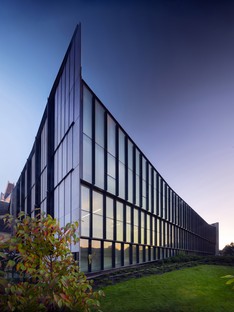 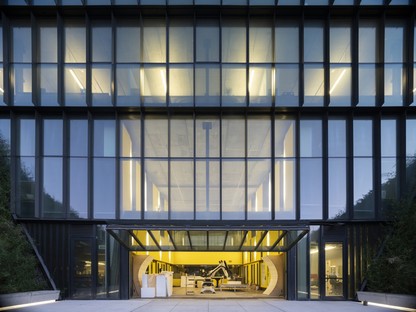 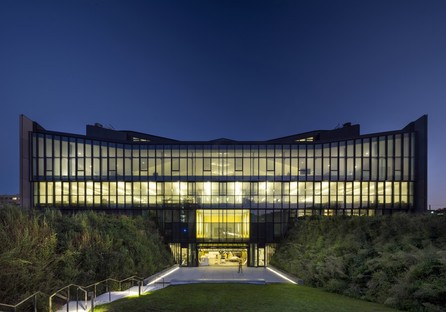 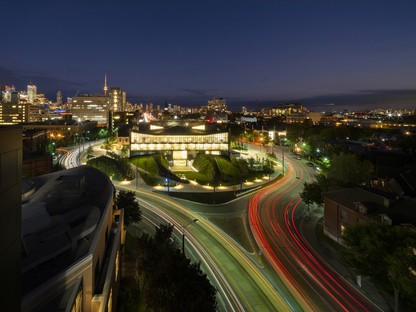 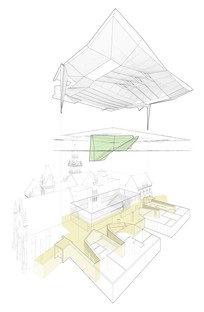 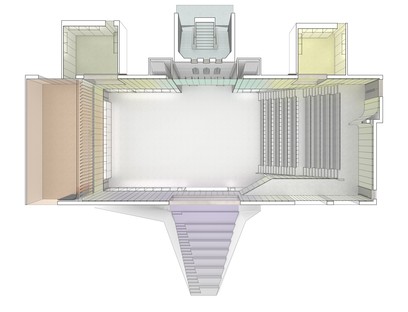 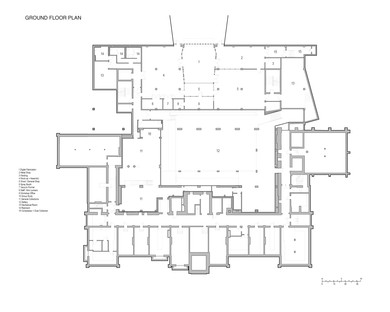 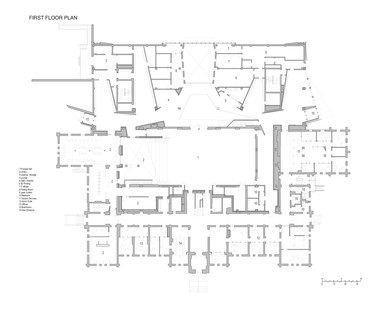 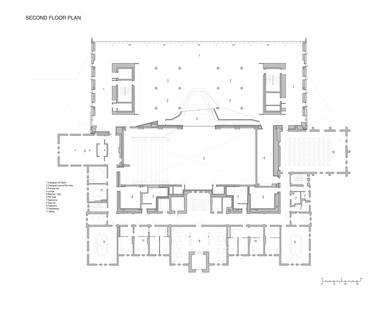 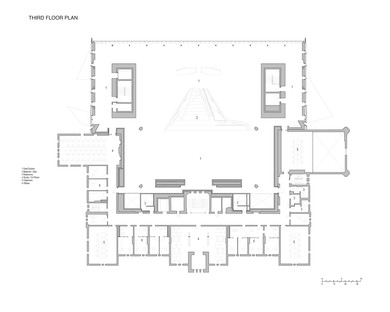 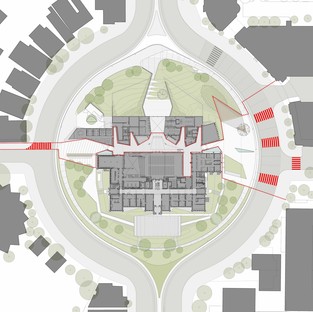 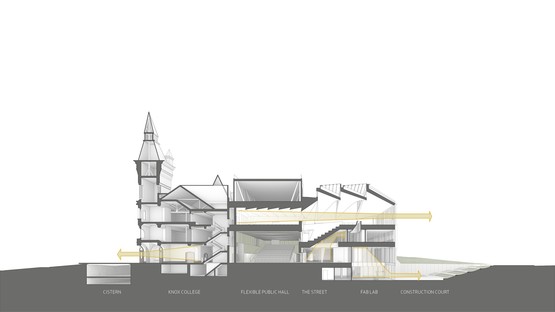 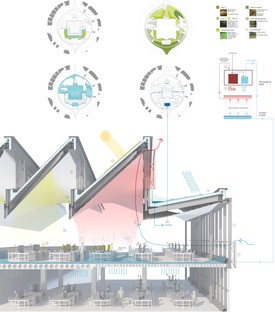