The project concerning the Gonzague Saint Bris social and cultural centre completed in Cabourg (France) by the Paris-based firm Lemoal Lemoal Architectes, is an interesting urban answer that revitalises a plot of land without landscape value. The architects designed a sustainable complex based on local materials, reinterpreting the archetype of a typical Norman farmhouse. 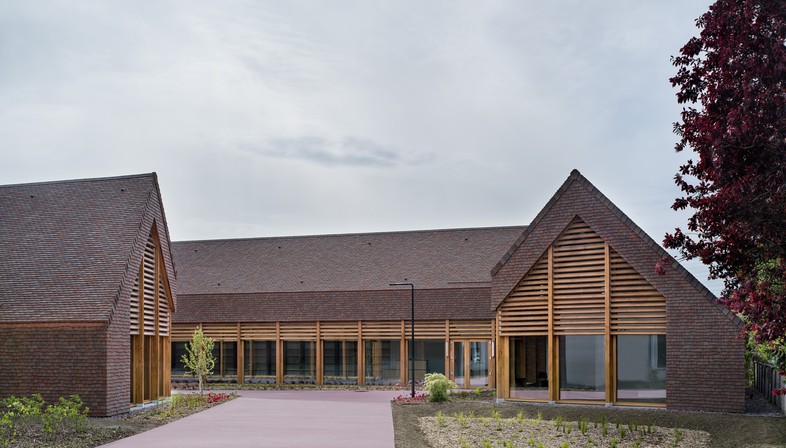 We are in Cabourg, Normandy, a municipality counting less than 5,000 inhabitants that overlooks the English Channel and known as a popular seaside resort. An international fame tightly linked to the fictional town of Balbec from the book "In the shadow of young girls in flower", the second volume of In search of lost time, the famous literary work written by French author Marcel Proust.< br /> Here, the Lemoal Lemoal Architectes studio, founded by the architects and brothers Christophe and Jesse Lemoal, completed a project for the new Gonzague Saint Bris social and cultural centre. A design that provided an interesting urban answer to the request put forward by Cabourg’s local administration, which commissioned the project, as well as reinterpreting the typical buildings characterising the local architectural tradition. 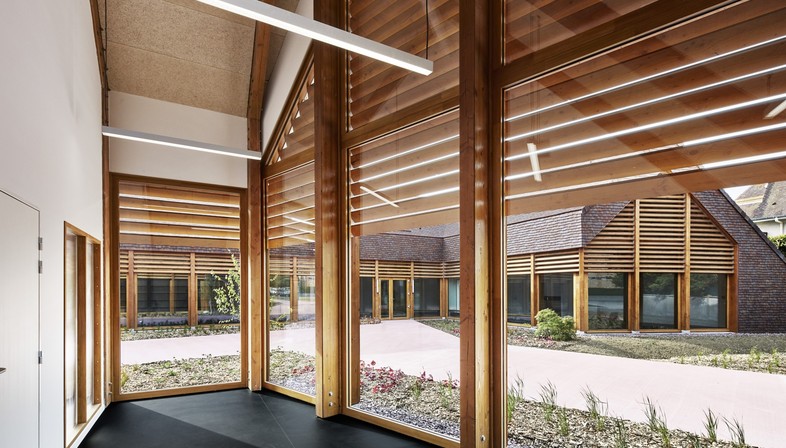 The plot of land involved in the intervention did not have any landscape value per se, an area enclosed between a maternal-child protection centre and a parking lot, without direct access to the road. A situation that created a first and crucial problem for the architects, who had to come up with an appropriate design solution: creating a visible access to the new cultural centre. The architects’ brave solution was to “open the lot” to the local community, creating a pedestrian path that crosses the entire area diagonally and establishes a connection between the residential area located north of the city and the city centre, located south. In contrast with the client’s indications, which had called for a single building able to accommodate both social and cultural functions, the architects proposed two L-shaped buildings. These two buildings define a new public space: a square and a path along which the two new structures open.
A simple idea, yet one which had a disruptive and winning effect, consisting of two distinct but almost identical structures that recall the archetype of Normandy’s typical buildings with their impressive terracotta roofs. 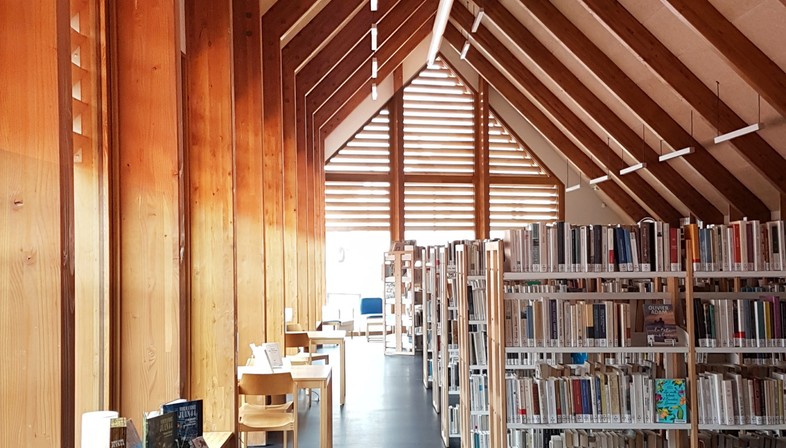 Outside the lot, the two buildings, hosting the social centre and the cultural centre, with their silent façades covered in terracotta, appear as a large monolith that marks the urban landmark.
Inside the lot, the two buildings open their entire longitudinal section towards the central public space thanks to full-height windows, framed by the supporting structure and by the lattice created by the wooden brise-soleils. Both buildings are very similar in their planimetric setting, size and distribution of internal functions. Technical rooms and toilets are located at the back of the two buildings, while public spaces and areas such as reading and play rooms integrated into the cultural centre open towards the central public space.
The architects reinterpreted the archetype of the typical Norman farmhouse, while optimising the wooden structure and simplifying the original model, with the goal of creating a contemporary yet respectful version of the local materials and traditions. 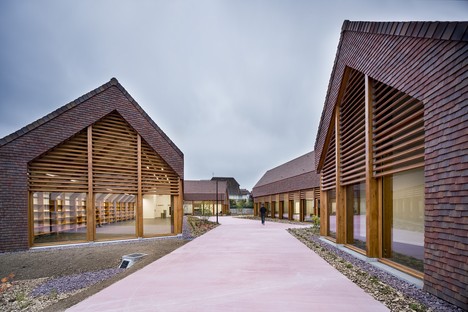 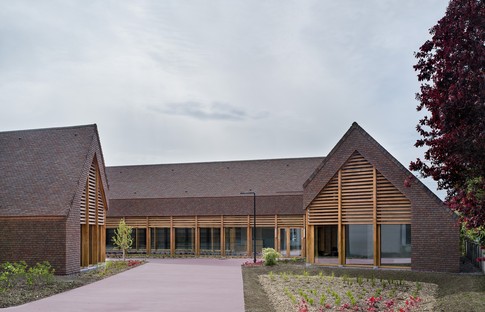 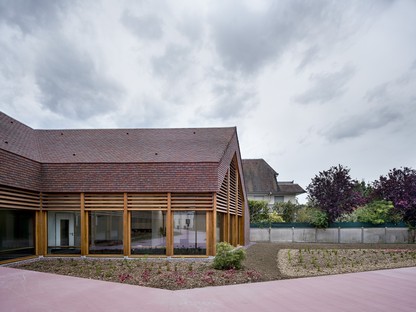 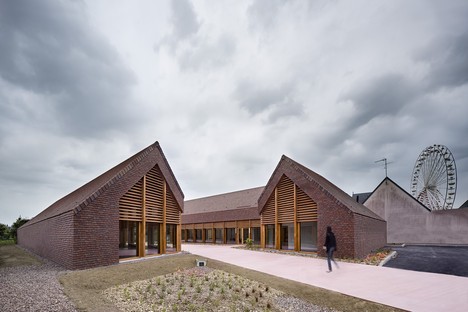 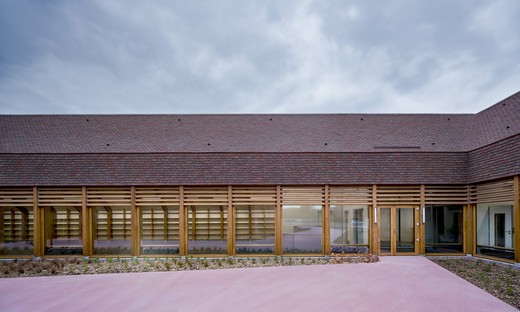 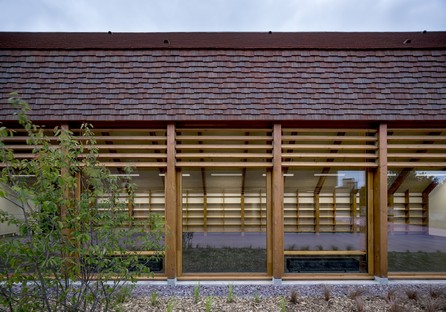 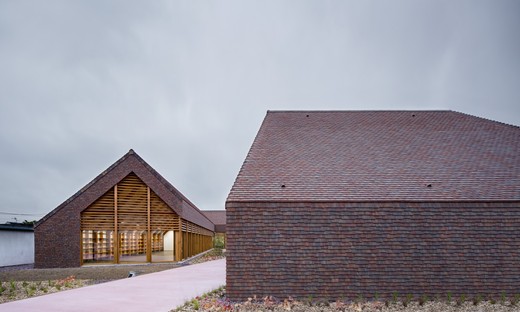 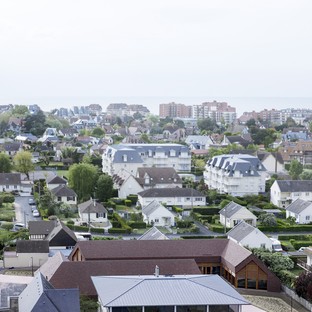 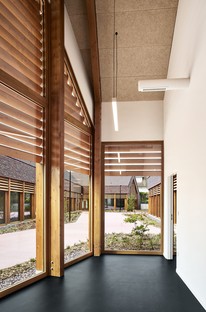 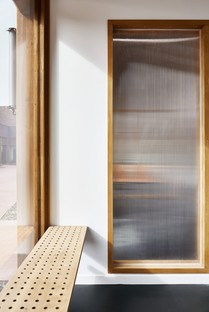 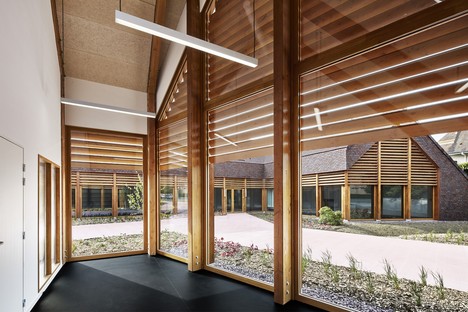 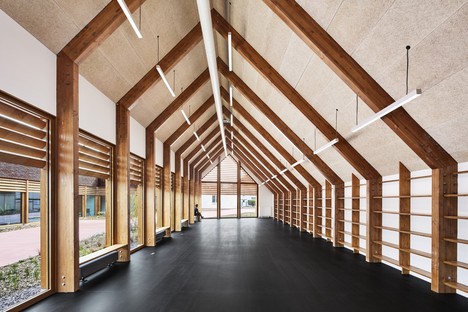 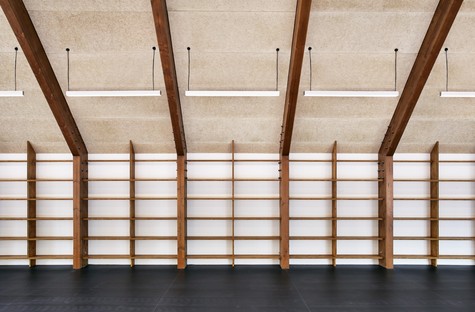 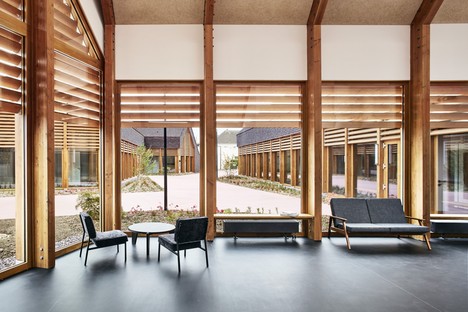 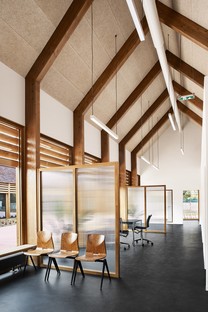 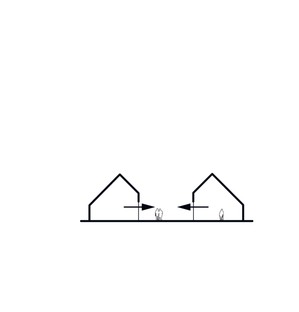 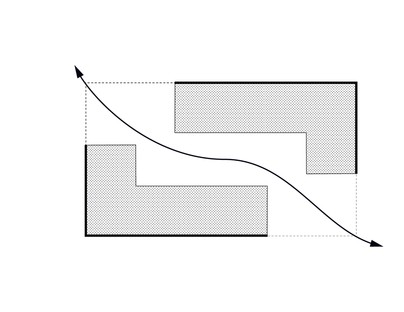 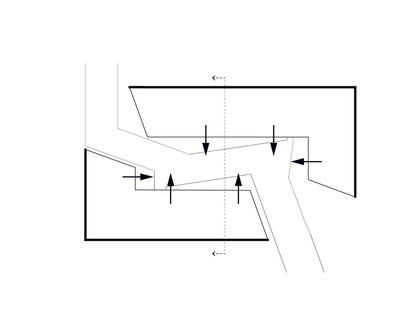