Brazilian firm Kruchin Arquitetura was commissioned to create a new project to expand the Capobianco House, a residence designed by the same studio thirty years ago. In addition to expanding the house by building a large library, the new project redefined the façade and recontextualised the original volume. 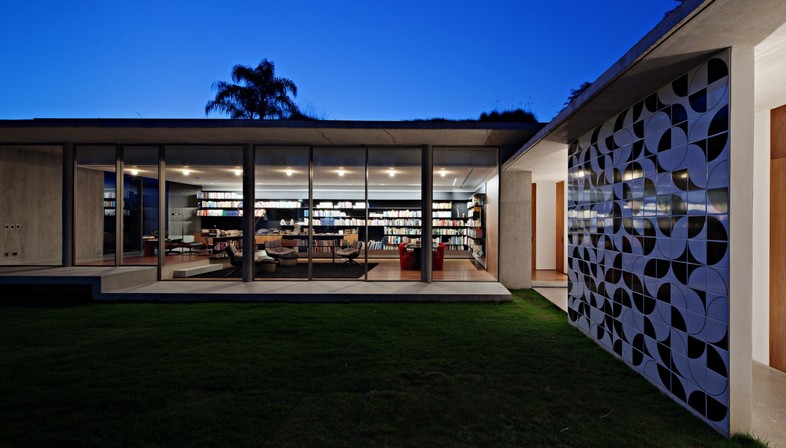 A thirty-year long story links the Capobianco House to its designers, the Brazilian firm Kruchin Arquitetura, founded by architect Samuel Kruchin in São Paulo, Brazil.
Architect Samuel Kruchin started working on the Capobianco House in the 1980s. The first core of the house, designed for a couple with a daughter, was in fact completed in 1986.
The original house was and still is a rectangular building, delimited by vertical planes in grey and orange concrete. All the "social" functions of the house and the living area in general are distributed on the ground floor, while the sleeping area, which required greater privacy, is located on the upper level. A scenic concrete spiral staircase connects the two levels and is lit from above thanks to a large skylight.
In the early 2000s, the architects of the Kruchin Arquitetura studio designed an extension of the living space and also added a fitness room to the first core of the Capobianco House. 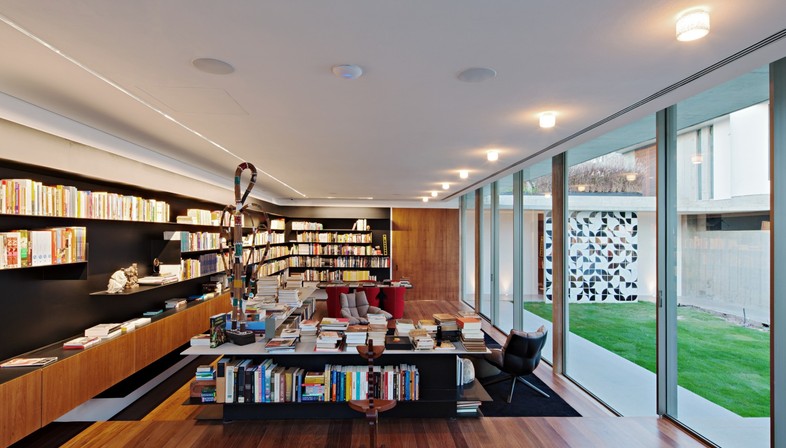 Now, thirty years later, the owners have again commissioned architect Samuel Kruchin and his studio to complete the design for the expansion of the house. The new and third module adds new functions to the existing home: a library, a study, a video projection room and a lounge area where the owners can entertain their guests. The transformation also required a redesign of the façade of the Capobianco house, as the new project included a horizontal expansion of it. However, the architects did not restrict themselves to only designing a new extension with new facilities for the house. Through these intervention, they also recontextualised the original volume, creating new relations with the surrounding context and giving the building a more contemporary aspect.
The new volume is a rectangular parallelepiped slightly raised above the garden. The construction was built in concrete, but favours a direct, strong and permeable relation with the garden thanks to the large transparent full-height windows that open on the East and South fronts. The solution chosen for the façade not only allows natural light to illuminate the space by creating an ideal reading environment, but also creates a contrast with the full and closed walls of the house to which the new extension connects. From the original building, it is possible to access the new library through an indoor corridor, partly closed by a wall covered in ceramic tiles. The optical design of the tiles, obtained through the white/black contrast and the decomposition of a circular motif, contrasts the linearity of the cement. The motif was designed by the architects in order to create a rhythm and a dialogue with the surrounding context and is used again in the courtyard’s metal fence, which will eventually be covered with plants.
The garden also contributes to the linearity of the composition. The shared part of the garden, located between the house and the new volume corresponding to the library, is in fact a simple lawn, designed so as to not create shadows and to allow maximum visibility to the architecture. The covering of the new extension is also in continuity with this part of the garden and coherent with the architectural choices made by the architects. The architects chose a flat, green roof to cover the library, ideally giving back the lawn that was taken out to build the new volume. 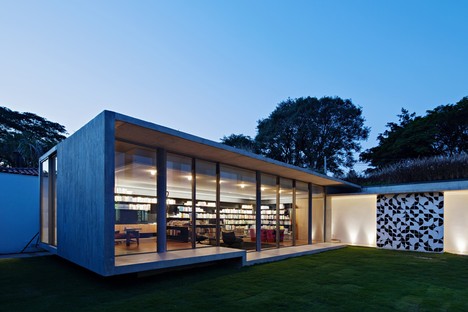 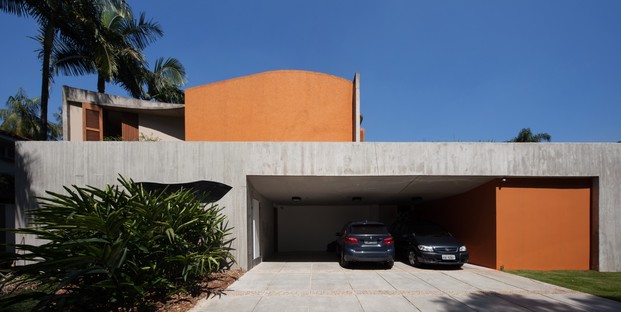 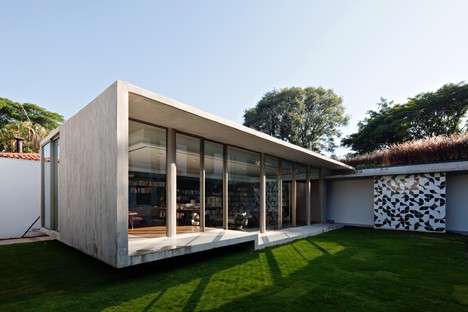 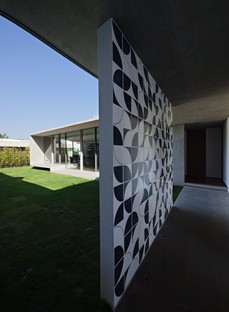 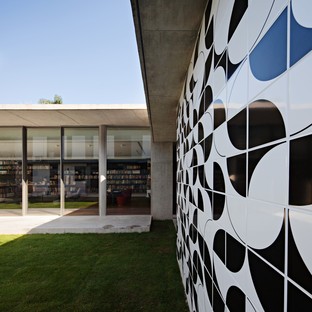 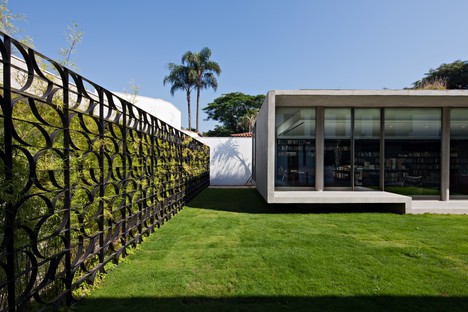 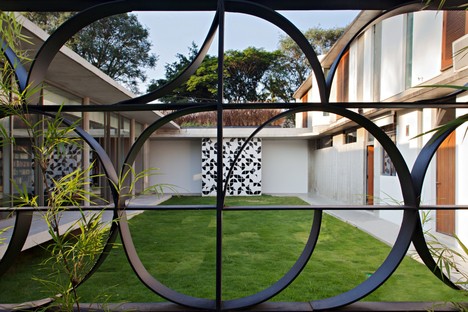 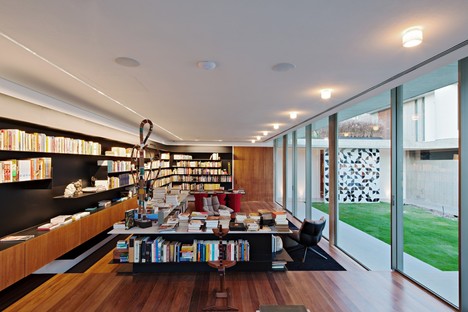 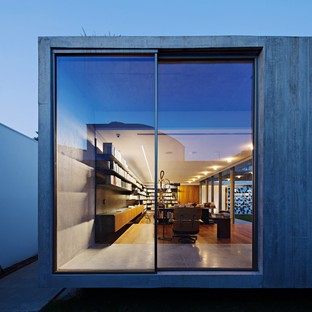 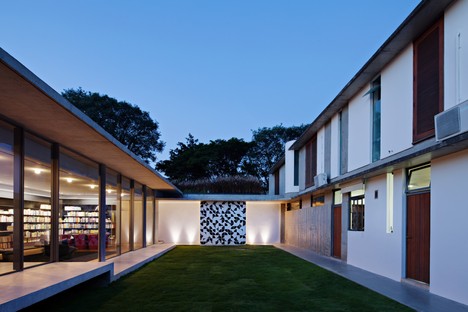 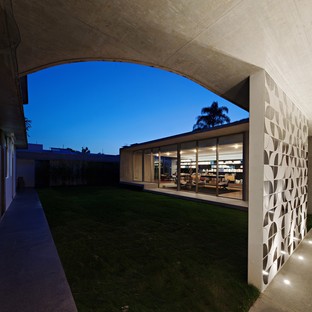 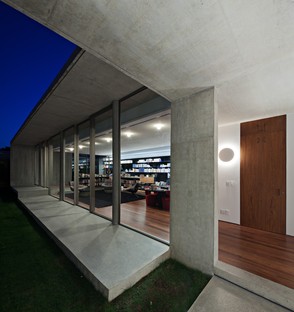 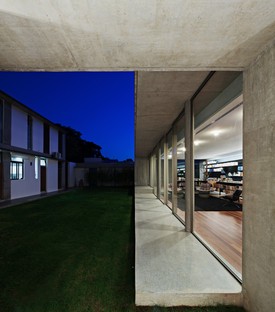