Architecture as an educational tool is the message conveyed by the Hakusui Nursery School in Sakura, Japan, designed by Kentaro Yamazaki. A nursery in a glass pavilion with steps that follow the contour of the hillside, with finishes made from Japanese woods and a water-based cooling system on the roof. 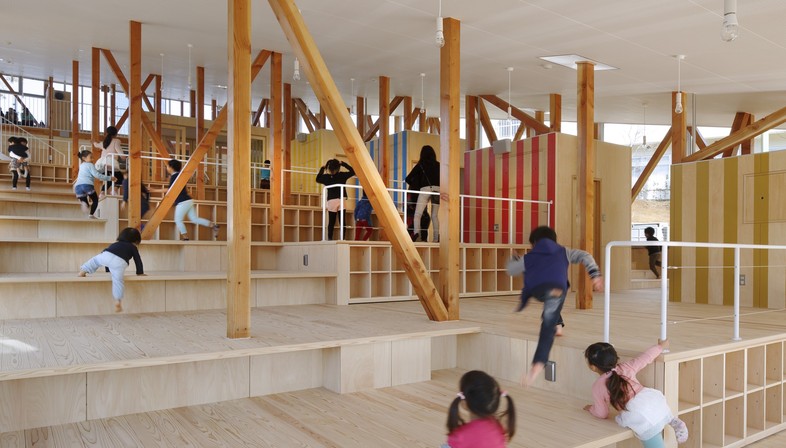 Kentaro Yamazaki designed the Hakusui nursery in Sakura according to the educational principles that now form the basis for the literature on the topic, namely freedom of movement, creative freedom or knowledge of the environment, in the sense of the near and far space of relationships. The Hakusui Nursery School was a project initiated at the behest of the Seiyu-Kai, a company that normally deals with the management of care home facilities and which, in this case, wished to experiment with a social project based on the relationship between child users and elderly users. Indeed, in the rural area where the kindergarten was to be located, there were already two care homes, and the carefully-considered design choice of building a glass structure for the younger users was aimed at establishing a close visual relationship with the surrounding environment, both physical and social.
As you follow the uphill road that runs alongside the lush, verdant hill, moving away from the more built-up areas, you can catch a glimpse of a glass pavilion, light and short, laying along the slope and following the contours of the land. The building, made from structural plywood and glass, is spread across two levels on the north side, which is the reception and office areas. As you move down the hill, the building becomes an open-plan space on a single floor which uses the ever-changing height difference, rather than walls, to divide the spaces up between the different age groups. Thanks to this composition, which is almost entirely free from internal dividing walls, and with large windows as external barriers, the children can observe and ponder the natural scenery around them throughout their daily activities.
The interiors artificially reproduce the surrounding hilly environment, using a stepped background that follows the natural slope, clad in natural Japanese cedar wood. The pillars are made from American pine: their steady rhythm and intense colour are redolent of a forest scene, whilst the Japanese lime tree furnishings have been made to measure in order to fit into the spaces carved out of the steps, without disturbing the overall aesthetic. The only closed rooms are those for the children’s toilets, present on every level, for a total of five: these are also made of wood and have been decorated with differently-coloured lines, creating attractive specific graphics. The creation of such a wide visual perspective and the rich array of colours used in the project help the children to feel that they are outdoors, or rather, that there is no difference between playing inside and playing in the open air.
From every observation point, both external - such as the north terrace where parents can meet and wait for their children - and internal, the school takes the form of a vast stage where children are free to play. The 60 children who attend the school have areas that are reserved for certain age groups; however, these are not closed rooms, but rather open spaces where they can observe one another, thus helping them to learn about the activities that await them, but also about more global values such as coexistence and sharing.
This type of layout also has a practical purpose, the architects explain: in line with the philosophy of Seiyu-Kai, which boasts 26 years of experience in constructing social facilities, the open-plan layout has the aim of minimising the number of blind spots within the building so as to allow the staff to easily supervise activities and make safety and security measures as non-invasive as possible. One of the key issues for those who are in the business of improving the quality of the experience in care facilities is ensuring the safety of its users in a discreet way, i.e. in a way that does not compromise on comfort. The same attentive approach has been used in this case, where, for example, the architects have managed to reduce the parapets to a minimum.
From an energy efficiency point of view, the building has been designed to maintain a cool indoor temperature in the hot seasons with a self-sufficient system. The sheet metal roof has a water-based cooling system: the water that runs down to the lowest level forms light waterfalls which feed into a small outdoor artificial pond, which is one of the teaching tools used. Accessible to the children, and directly to the older children, it offers a direct point of contact with nature. During the hot season, the water contributes to the building’s natural ventilation, generated by the internal air currents that develop through the building when the main windows in the north and south are opened. Finally, in the winter, a system on the highest level of the building draws in the rising warm air into a vent which runs underneath the floor, meaning that it functions as a radiator. 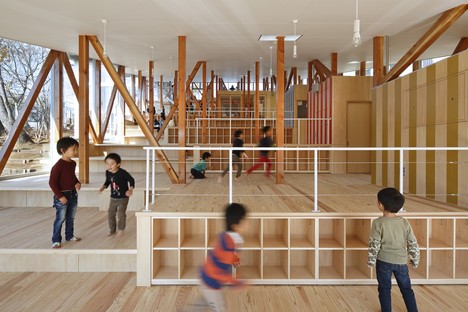 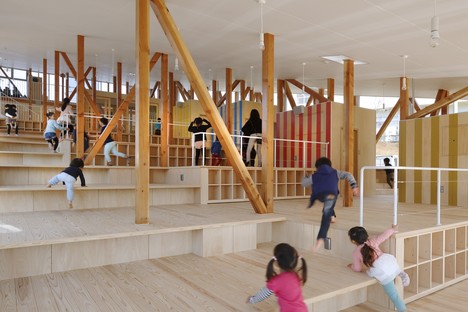 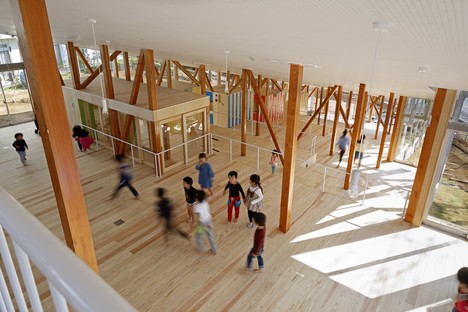 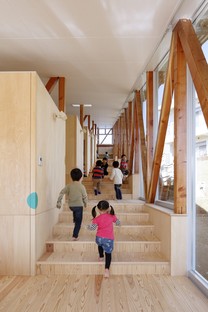 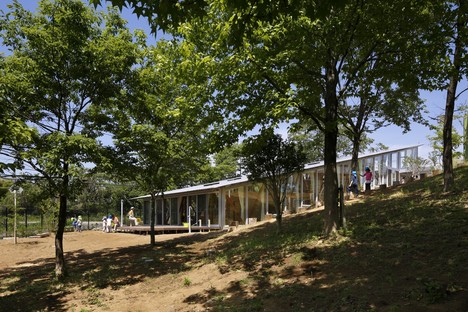 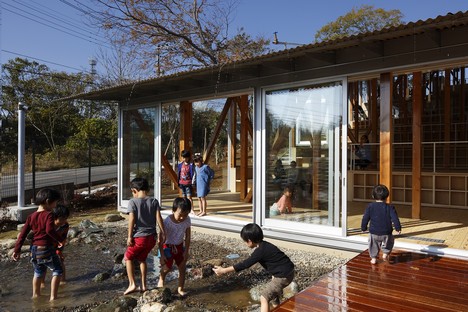 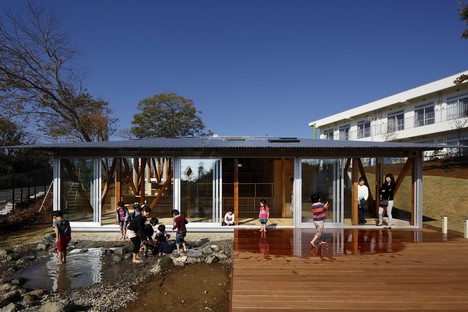 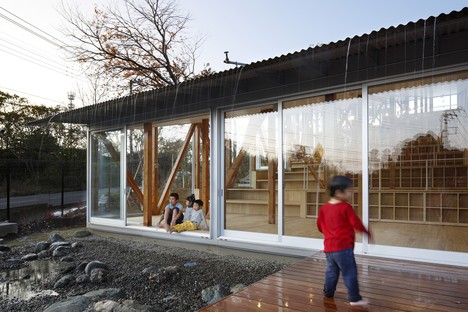 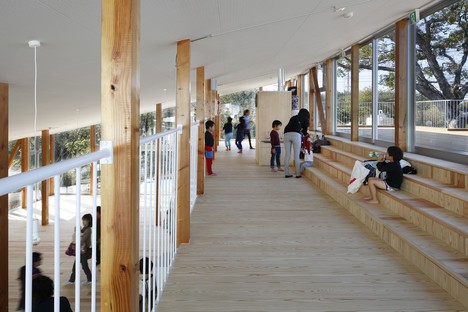 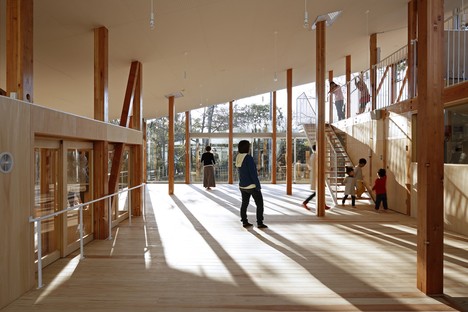 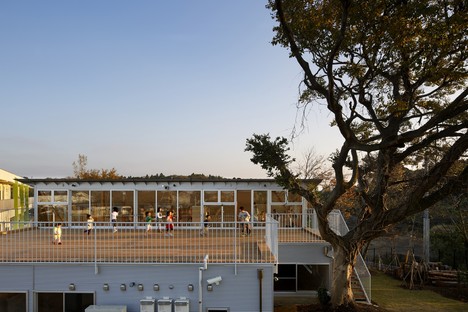 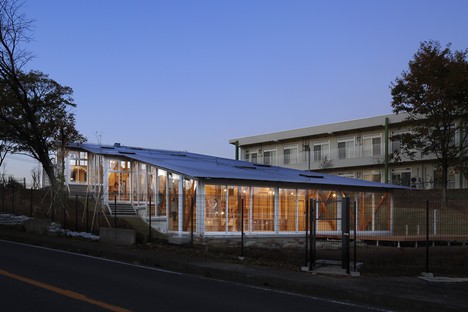 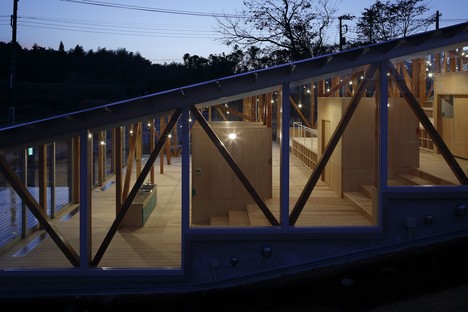 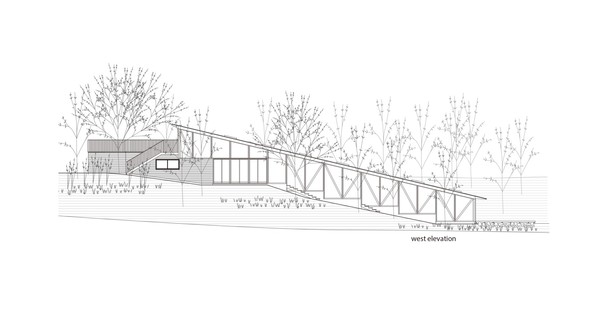 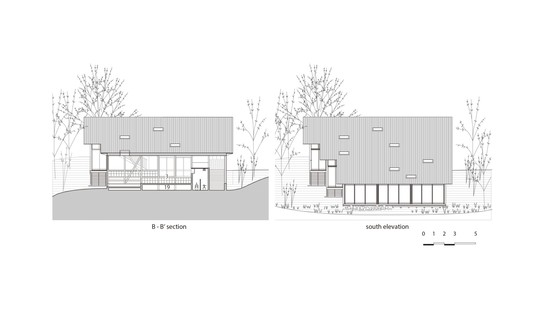 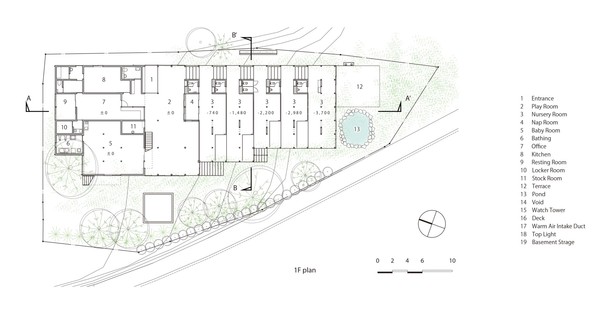 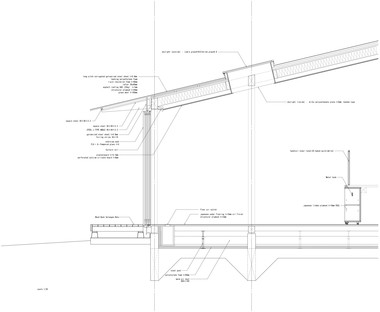