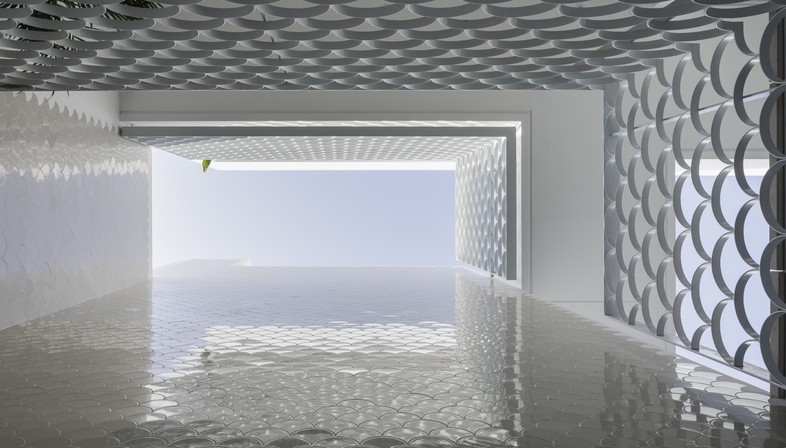 On a small triangular lot measuring less than 200 square metres stands the Conil Home Suite, a building containing small holiday apartments in the Andalusian town of Conil de la Frontera on the Atlantic Ocean. The project is by Kauh Arquitectura y Paisajismo of Granada, a studio already renowned for another project in the same town, a social housing development selected for the XIII BEAU, the Spanish architecture and urban planning biennial. What the two projects share is a focus on the town’s surviving vernacular idiom, ensuring that the new constructions fit harmoniously into their surroundings.
The town of Conil de la Frontera, with a population of about 20,000, is located not far from the bigger city of Cadiz, near the Strait of Gibraltar, and is a surfers’ paradise, like many towns on the Atlantic Ocean. What used to be a small village that had grown up around its historic centre with shops to serve the community was transformed into a tourist resort in the second half of the twentieth century, and many of the local businesses have adapted to serve a new clientele of mostly temporary visitors. The redevelopment of the old buildings with patios and terraces that complete the urban fabric of towns both large and small in Andalusia was aimed primarily at business purposes, taking advantage of the hordes of tourists who come to the area’s sunny, windy beaches every summer.
The area to the east of the town centre has been developed in recent decades. In place of what used to be a vacant lot, used by the residents as a parking lot on the corner of Calle San Jose and Calle Ramon Y Cajal, is the Conil Home Suite, a free interpretation of Andalusian architecture and its distinctive features.
Kauh’s project completely fills in the empty space, resting against the two buildings on either side of the lot and rounding off the corner at the intersection as if to create a little plaza where there was none before, in order to partially maintain the open urban space. Milk white, like all local buildings, on three levels, including a garden terrace, the Conil Home Suite building fits harmoniously into its specific context, to the point that it looks as though it has always been there. But the rounded corner along the entire height of the strikingly white wall distinguishes the building from the square houses around it, which often have an irregular, overhanging shape, to define a new urban space.
One detail introduced by the idiom of contemporary architecture to serve the internal layout is the vertical windows letting plenty of daylight into the building. Application of iron railings offered an opportunity to imitate the designs on the adjacent buildings, successfully coming up with a new decorative solution which is also reflected in the wall coverings and the gates. The bathrooms, on the other hand, have small round windows.
While the layout of the building is inspired by the usual floor plan of Andalusian homes – with a central courtyard around which all the living spaces and utility areas are arranged, on different levels but all opening onto it – the building’s function required a different internal layout, as each apartment is a one-room studio.
As soon as we enter the building through the little entrance door on the eastern side of the ground floor, we come to the staircase to the upper levels, beyond which is the courtyard, so that it appears separated from the former space, whereas in the past the staircase normally opened onto the courtyard to provide direct access to the apartment interiors. The staircase is still a vertical link, but circulation on each level takes place on a walkway along two sides, serving four suites. The concept of the completely open glass inside walls screened with big curtains represents a nod to tradition, despite its new form. Here, the courtyard provides an oasis of shade and coolness on blazing hot Andalusian summer afternoons.
In accordance with the vernacular tradition, at the top of the staircase is a garden terrace, a level to be used and shared by all the building’s inhabitants. Historically used to store drinking water cisterns and shared by all tenants for hanging out their laundry, in this project the roof garden is primarily a place from which to admire the view of the city. 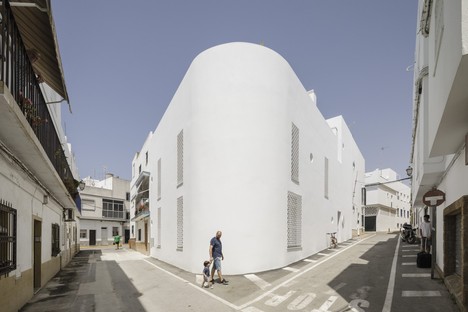 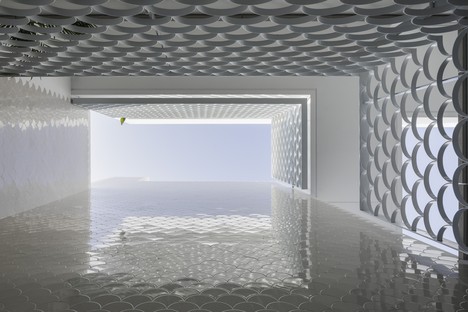 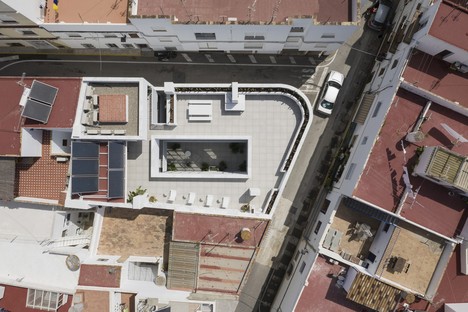 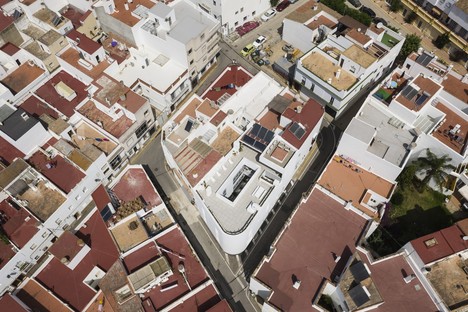 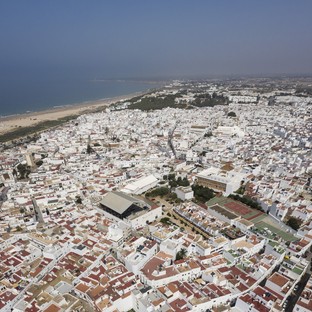 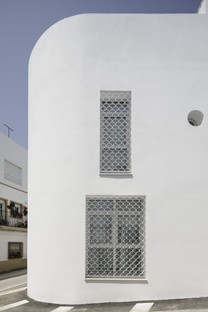 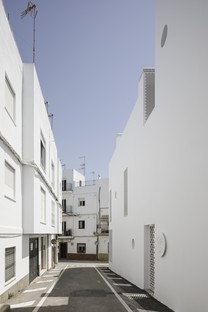 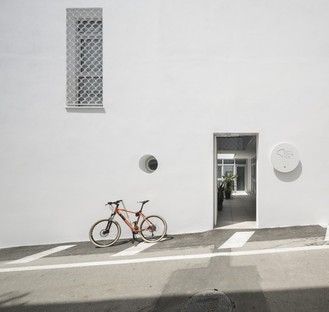 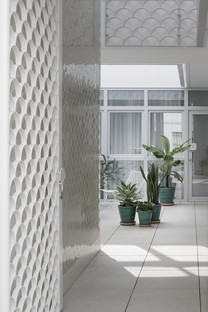 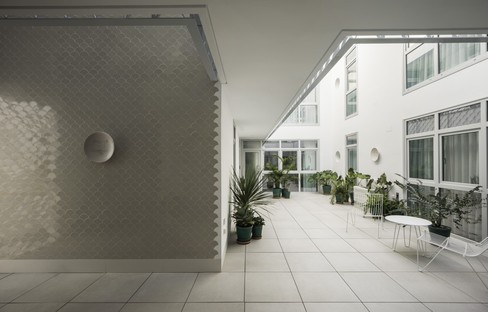 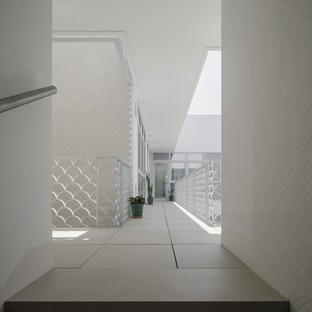 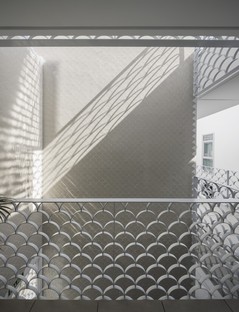 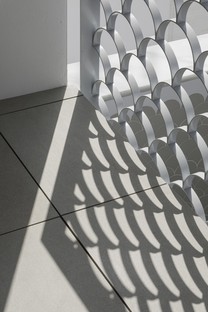 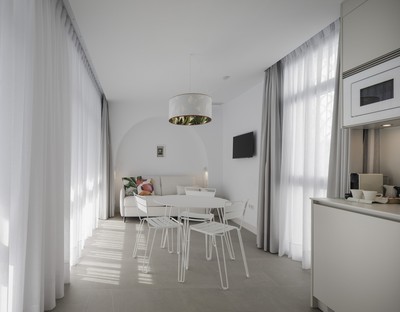 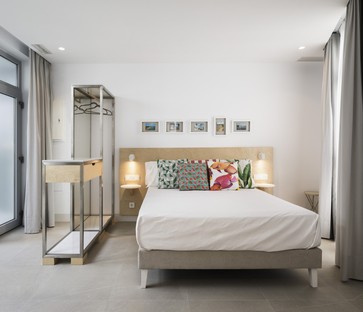 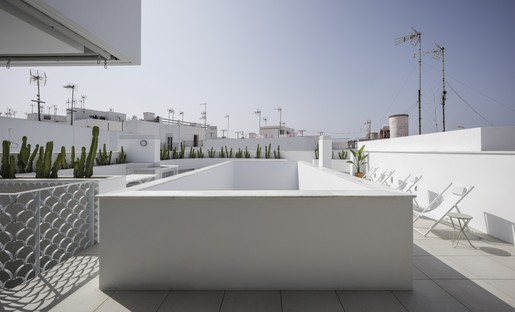 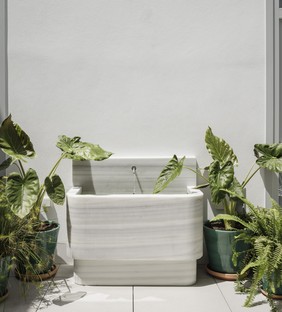 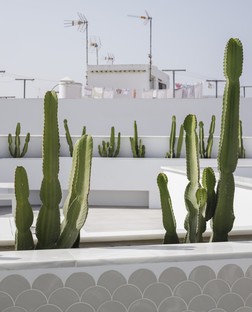 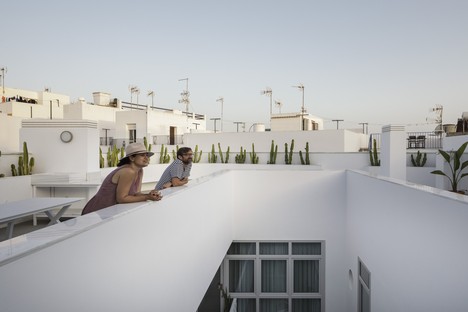 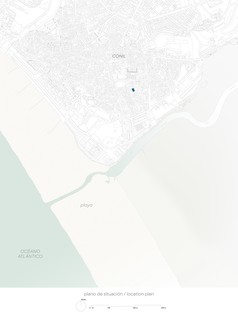 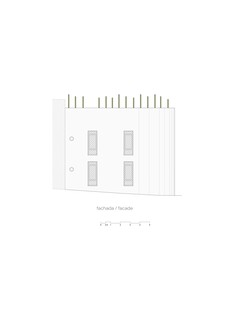 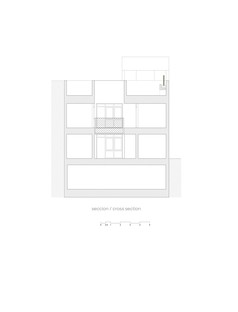 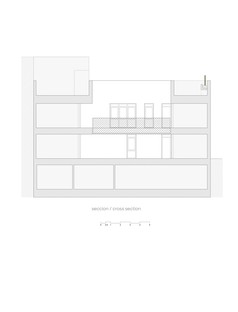 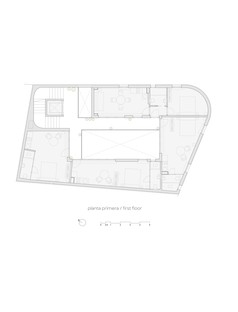 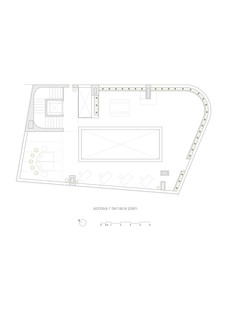