A retro restaurant in a villa on the Brenta Riviera in Stra and a cocktail bar within the walls of the old city of Bergamo: two recent projects designed by the Parisotto studio + Formenton Architetti firm. Projects in which the interior design makes the most of the existing architectural features and pays tribute to the local food and wine culture. 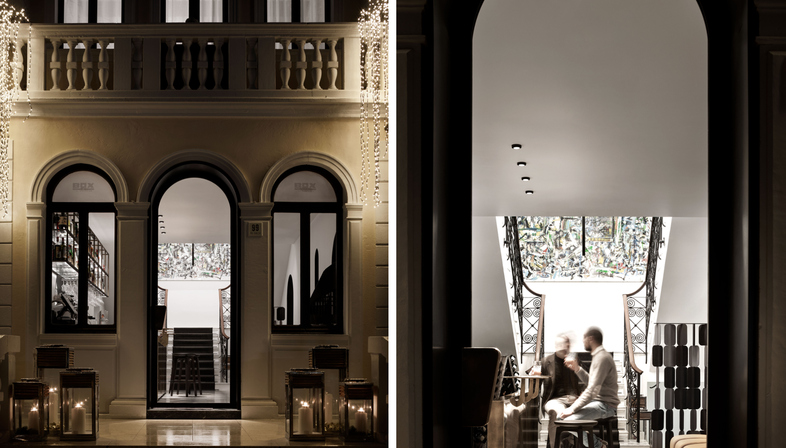 The Parisotto + Formenton Architetti architecture firm has recently completed two interior design projects dedicated to food: a retro restaurant in a villa on the Brenta Riviera in Stra and a cocktail bar within the walls of the town of Bergamo Alta. Two projects that make the most of the existing buildings and, at the same time, pay tribute to the local food and wine culture.

Box Caffè, set in a villa on the Riviera del Brenta in Stra – Venice
In Stra, along the Brenta Riviera, in an Art Nouveau villa from the 1920s, the Parisotto + Formenton Architetti studio has completed the design for a retro restaurant, starting by redeveloping the architecture of the existing building. During the 1950s the Villa had been transformed to become a café. The new owners, instead, decided to give the locale a gourmet flair, hence the need to provide the building with its original sophisticated and refined appearance. The architects therefore worked to restore the character and layout of the original villa, the general characteristics of the setting and the local typology, such as the presence of external loggias. For the interiors, they were inspired by the timeless charm of the architecture found in some of Giorgio De Chirico’s works. The metaphysical atmospheres of the famous Italian painter’s works have been recreated with some structural elements, such as the large arches with black architraves and coffered ceilings, together with the cladding and floors featuring a checkerboard design. In contrast to the retro-style white/black colour scheme, the interior features designer furnishings and works of art placed on the walls, in homage to the client, a collector and talent scout of emerging artists.
The architects differentiated the rooms according to their specific functions. The first floor, accessible from the large monumental staircase visible from the entrance, is reserved for two private rooms: one dominated by red and the other by a more domestic atmosphere. The two main dining rooms, characterised by an informal conviviality, are located on the ground floor together with the open kitchen. The kitchen balances the presence of the great monumental staircase and reflects the contemporary trend that transforms the preparation of the dishes into a ritual for the restaurant’s guests. 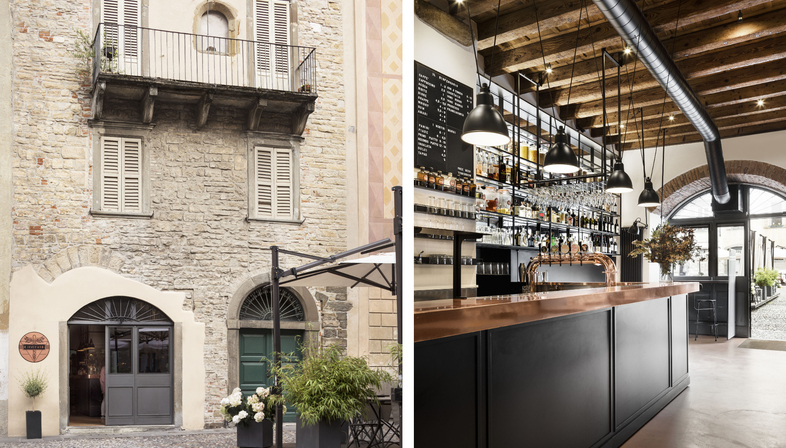 Il Dispensario Cocktail Bar – Bergamo Alta
Similar to the project for the new café in the Villa on the Brenta Riviera, the Parisotto Formenton Architects firm took a similar approach for the design of the Il Dispensario Cocktail Bar, making the most of the existing building and working to restore the materials present in the intervention area. A choice dictated by this historic place and its rich history, the heart of the ancient town of the city, with the square where the market was held during the Venetian domination. The architects therefore decided to restore and leave the original stone walls exposed. Inside, the stone walls engage is a close dialogue with the black panelling and copper elements, and on the outside with the cobblestone pavement of the square that severs as the dehor of the cocktail bar. The concept of the interior design project is to give back to guests the eclectic soul of the restaurant, including from a visual perspective: a hybrid of a craft brewery, a bistro and a cocktail bar, where traditional dishes are accompanied by new culinary experiments. The architects have therefore selected minimal elements such as black iron bookcases inspired by ancient pharmaceutical cases, combining them with contemporary furniture pieces with an industrial flair. 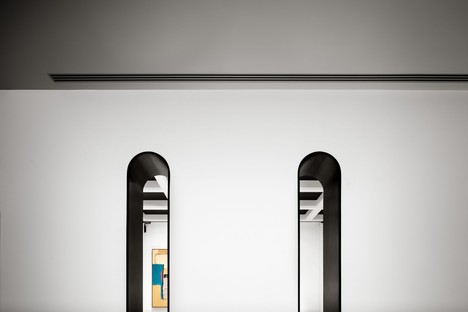 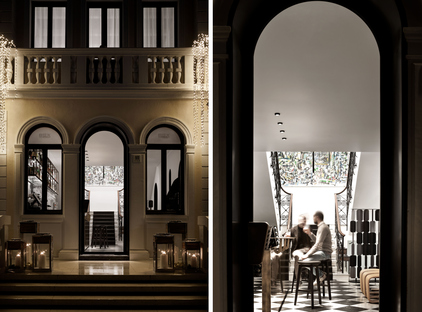 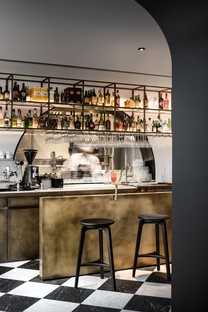 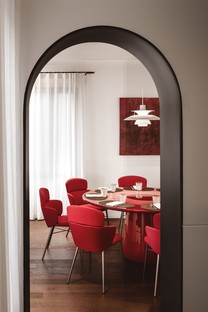 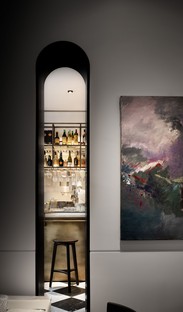 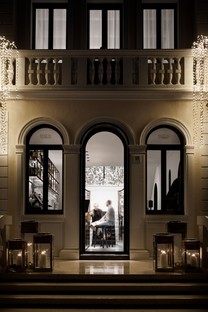 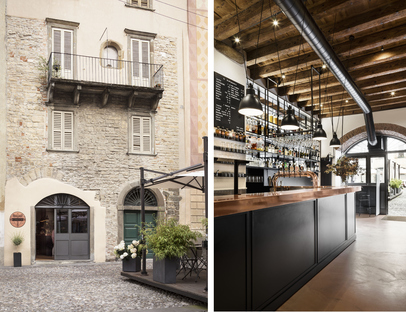 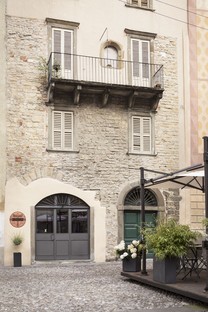 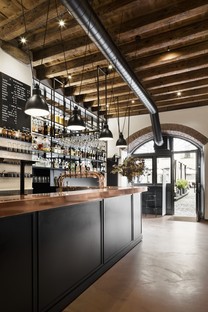 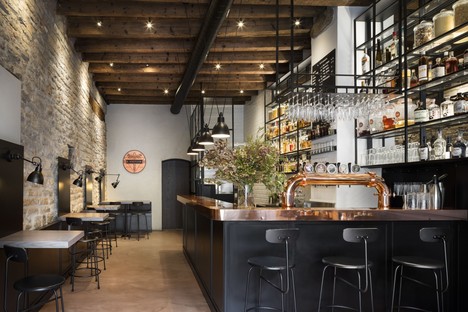 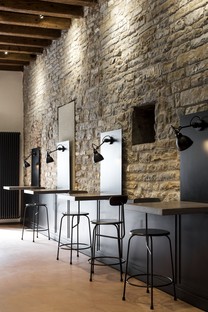 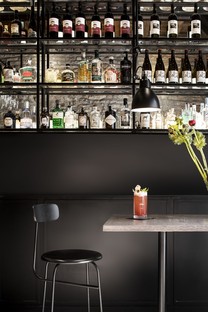