The C+S Architects studio redesigned Piazza del Cinema in Venice Lido by restitching together all the original elements that created and characterised the urban space, as well as rearranging the façades, the internal halls and a number of installations housed in Palazzo del Casinò. The project was awarded the German Design Award 2020 in the Urban Space and Infrastructure category. 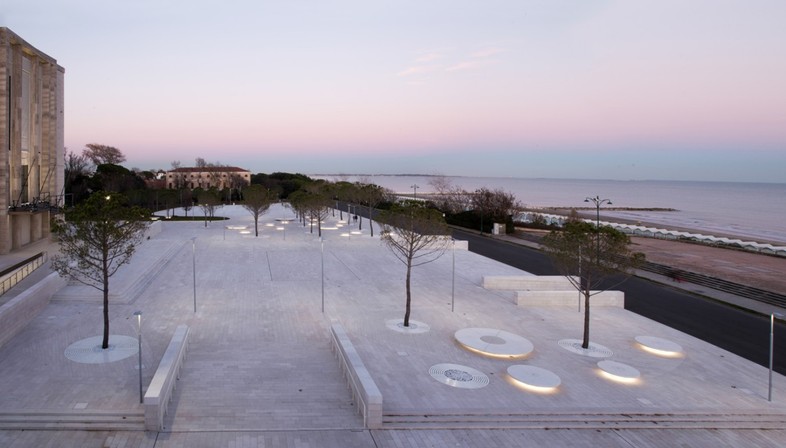 The urban project designed by the C+S Architects firm, founded by architects Carlo Cappai and Maria Alessandra Segantini, for Piazza del Cinema in Venice Lido was awarded the German Design Award 2020 in the Urban Space and Infrastructure category. In its motivations, the jury stressed the strengths of the project by highlighting how ““The spacious proportions combine with high-quality materials such as marble and brass for a captivating effect and underline the representative character of the place. A fountain and trees integrated into the square relax the severity of the stone surface”. 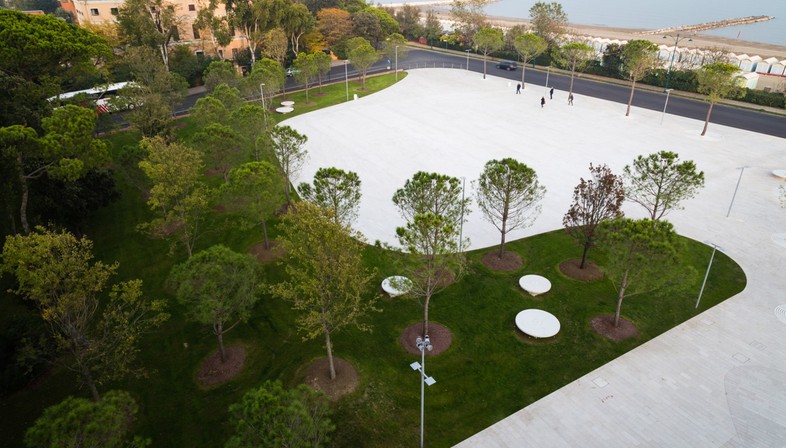 Venice Lido is a long and thin island stretching between the Venice lagoon and the Adriatic Sea. At the end of the 19th century it became a seaside resort, one of the most popular and sought after in Italy and in the world, a destination loved by celebrities and aristocrats. This fame came with a boom in development in the 1900s, when large luxury hotels such as the Hotel Excelsior (1908) and Hotel des Bains (1900) were built, followed by Art Nouveau residences, including the Grand Hotel Ausonia & Hungaria, characterised by its porcelain façade. Venice Lido’s splendour and fame earned it the well-deserved name of Golden Island. During the 1930s, new modern buildings, such as the Casino and Palazzo del Cinema, home to the famous Venice Film Festival, increased Venice Lido’s fame around the world.
The project designed by the C+S Architects studio focuses precisely on the urban development of Piazza del Cinema, as well as including the façades, the internal halls and a number of installations housed in Palazzo del Casinò. Work carried out while respecting the original materials and designs. A restyling of the square was also needed, providing the places with a new identity. Over the past twenty years, Venice Lido had indeed lost its charm as a tourist destination. Buildings that once enjoyed great importance, such as the Hotel Des Bains, were shut down and, despite its international fame and appeal, the Venice Film Festival is the only event able to revive the old splendour, but only once a year.
With its project, the C+S studio redesigned Piazza del Cinema by restitching together all those original elements that once characterised the urban space and continue to do so today. Thanks to this approach, the historic buildings subject to conservation constraints (Palazzo del Cinema and the Casino) are connected by a continuous carpet made of white stones which, as stressed by the jury of the German Design Award 2020, provides the place with a representative character and enhances its substantial size.
Architects raised the height of the square, in order to restore the beautiful view towards the sea, as well as preserving all the centuries-old trees that grace the gardens, incorporating them in the updated design. The new square is an urban space containing the elements that make it suitable for different uses and finally restored to the public for everyday use. Careful details such as the cuts for the outflow of water and the fountain in the central part, or precious elements like the brass handrails and parapets, give this urban place a suspended and contemporary atmosphere, defining the functions of the different areas, from meeting and talking to sitting and resting. 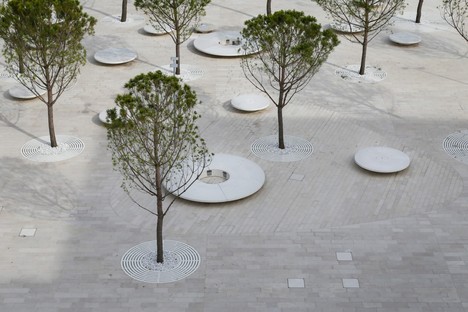 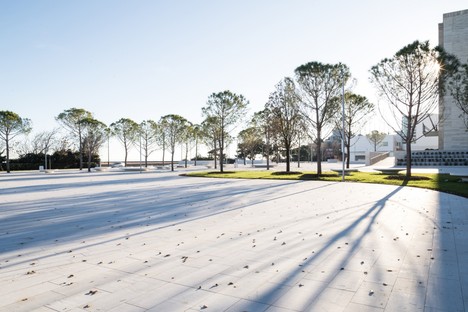 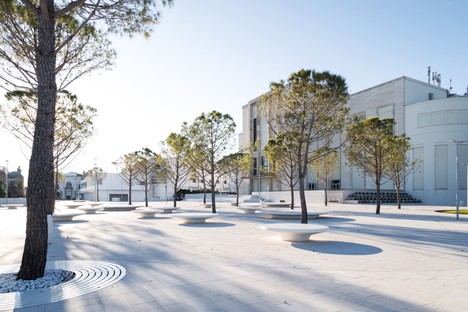 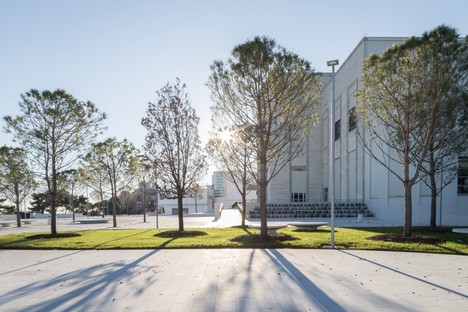 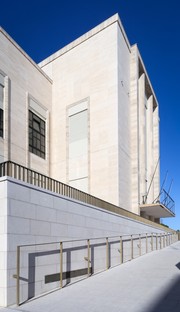 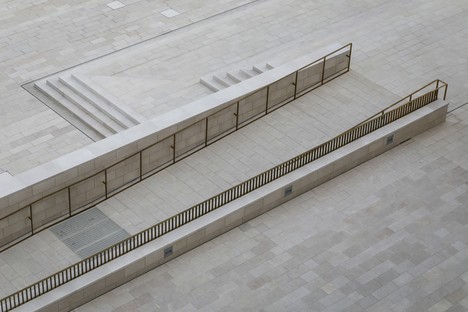 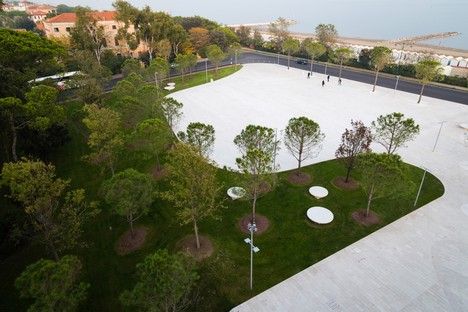 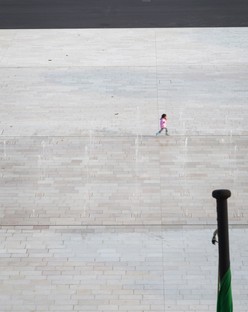 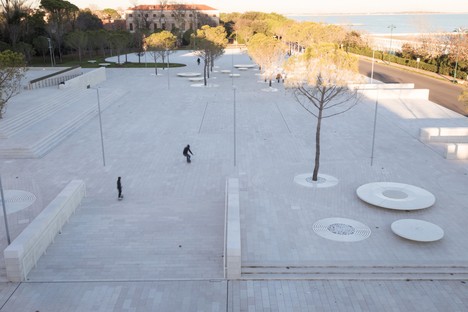 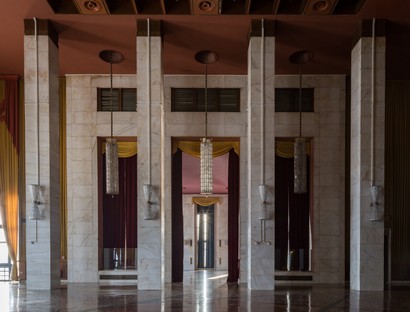 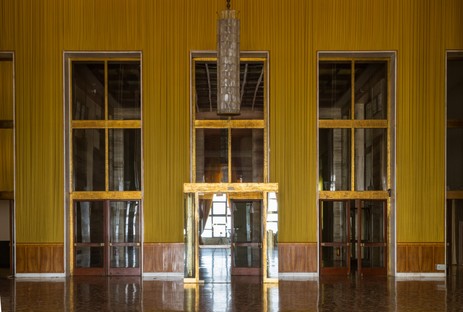