A summer home on the Volga 140 km from Moscow offers Russian architect Peter Kostelov an opportunity to reinterpret the model of the “dacha”, the do-it-yourself cottage that came into popular usage in the Soviet Union. Peter Kostelov has built a holiday home offering all the space and comfort the client required on a standard base measuring 6.5 x 8.7 metres. Organised on three levels, the home offers unmatched views of the Volga from the top floor.

The home is made out of timber, used for both the structure and the cladding, varying from classic strips to specially shaped panels and solid beams. The diversity of the surfaces in the home is underlined on the façade by different shades of brown paint which reflect the sunlight in different ways.
This effect adds to the home’s patchwork look, a reference to the typical “dachas” of the USSR. As it was very difficult to get access to building materials in those days, builders of country homes turned to ingenious forms of recycling. The results were of course highly varied, in sharp contrast with the standardised constructions in Soviet cities. Though these limits no longer apply in today's Russia, Kostelov’s project picks up on the concept of creative assembly to create a home that reflects its owners’ desires and re-launches the idea of creative reuse, not only as a new take on a historic model, but as a virtuous example of use of construction materials. 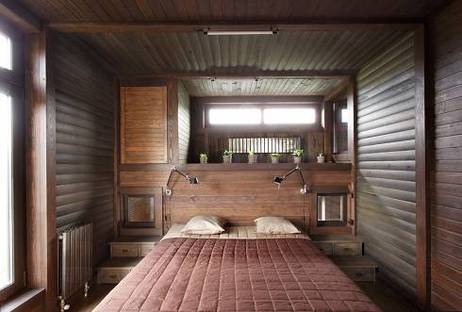